After a summer with more than the usual share of long hot days, we finally came to what looked like being the last one, and were determined to make the best use of it. So we broke some new ground with a trip to the southwest.

A few miles in, after passing through Kirkland, dominated by its kirk and large cemetary, we turned to the right onto the B729, signposted for Dumfries. The route was mostly downhill at this point, so we made good time through the gently rolling countryside. The smoothly contoured hillocks looked like they could have come straight from Tellytubby land, apart from the fact that they were grazed by sheep instead of rabbits.

As we approached Dunscore, we started going steadily uphill, reminding us that the route wasn’t going to be freewheeling all the way, and by the time I’d reached the centre of the village, it was time for the arm warmers to go.

We turned off onto a minor road, and the traffic reduced from occasional to almost non-existent. Although minor, the road had been fairly recently resurfaced, leaving plenty of residual loose gravel to be wary of. It was necessary to keep within the lanes cleared by car tyres rather than take the usual lines round corners. We were glad when we left it behind at the next junction. 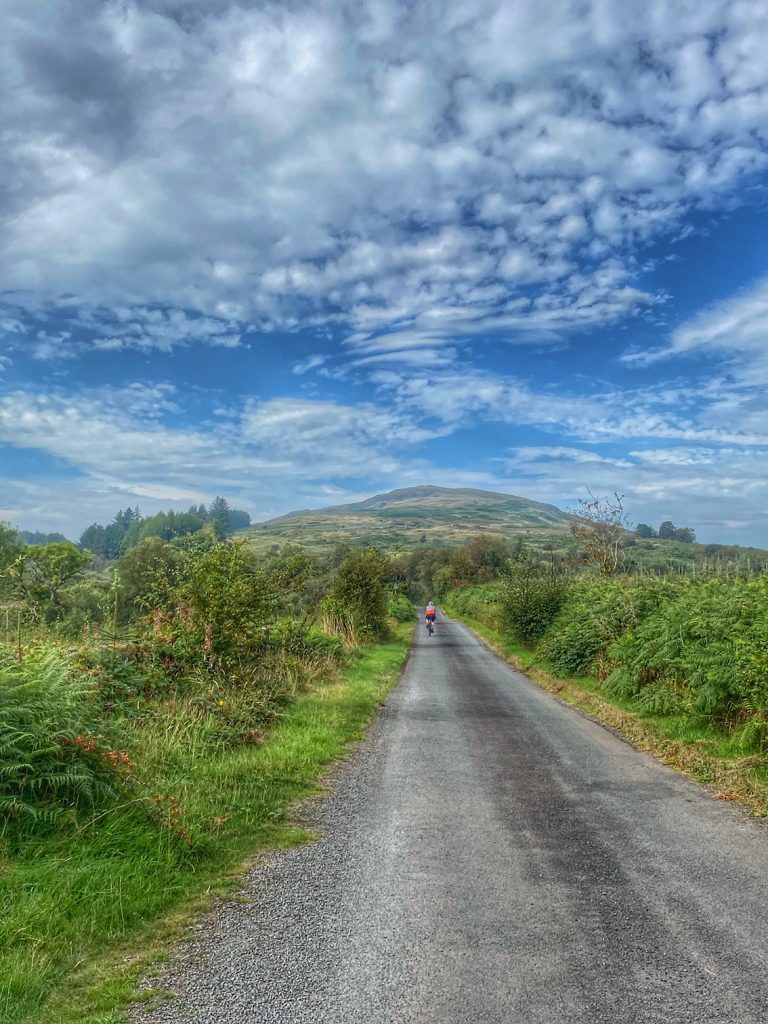 By now, we were transitioning to more remote country characterised by rougher pasture dotted with cows up to their oxters in long grass and ferns. To our right, the ground rose to a craggy ridge, with areas of bare rock showing through. I was enjoying the ride so much, I felt it must be my favourite of the year. 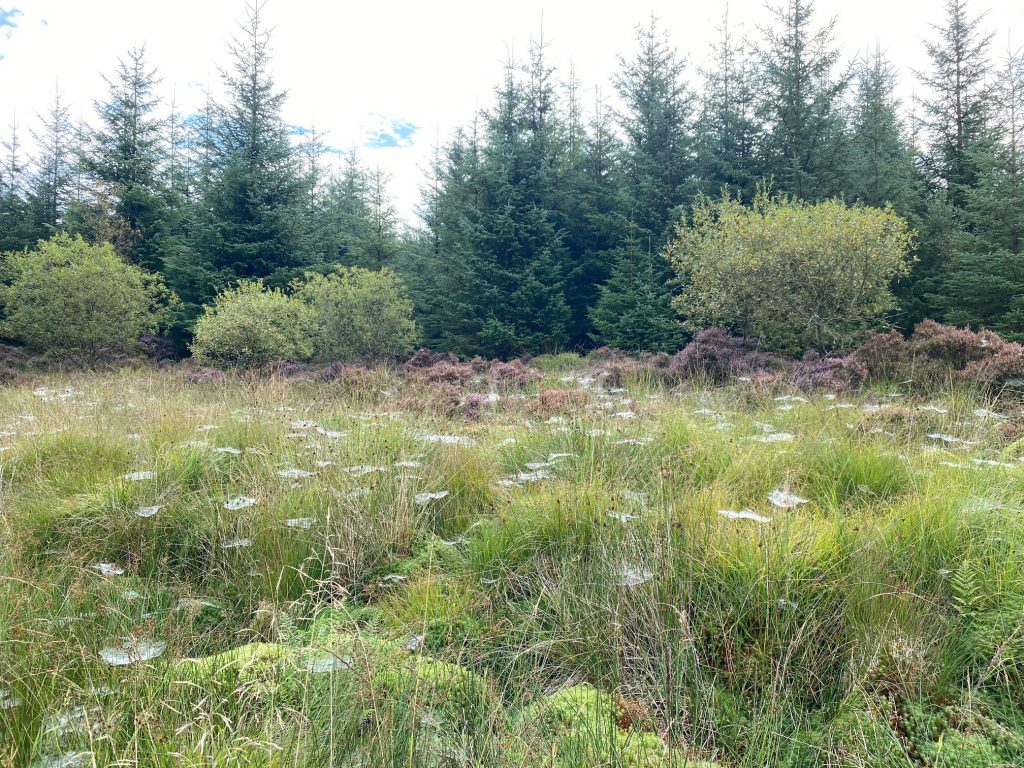 After some flat road, we started to climb through woodland, where we found other worldly spider hammocks, highlighted by dew, festooning the roadside grass and heather. We stopped for photos and Colette commented that she was having the best time and this must be high up on her all time favourite rides. So it wasn’t just me! 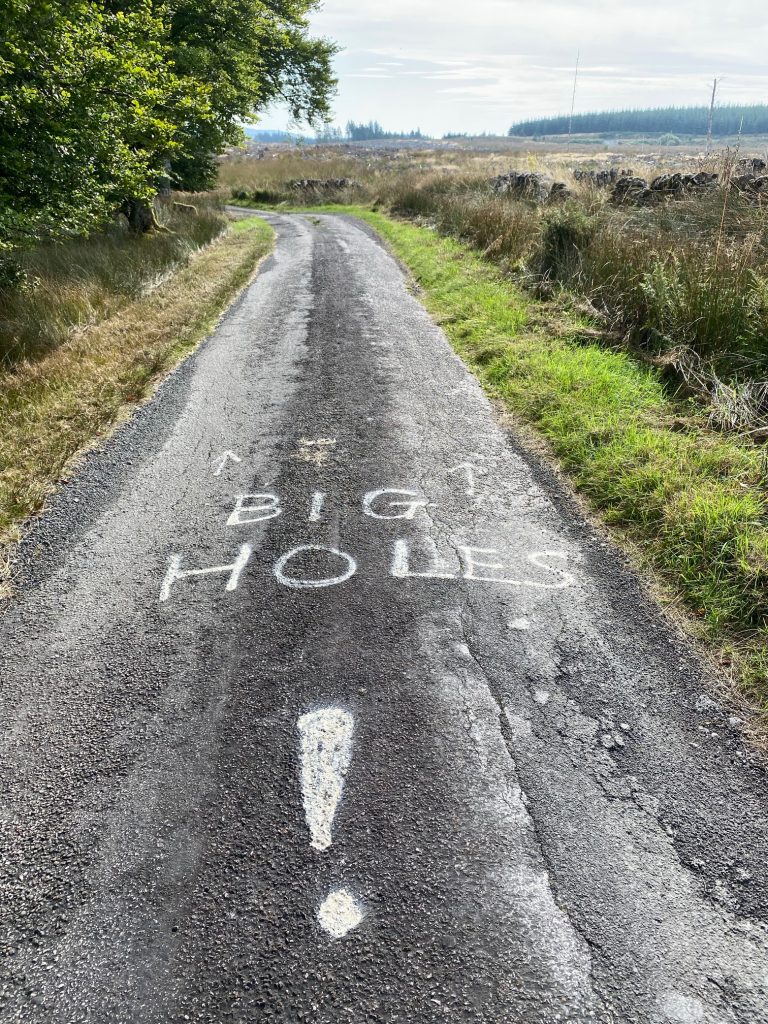 A bit later, we diverted onto a very minor road that clearly wasn’t much used and had fallen into disrepair, with some huge holes here and there. Thankfully there were warnings painted onto the road, and they were pretty easy to dodge round on a bike. At the other end of this road, we came out of woodland into more open countryside, where we passed some scattered houses. From there, the road was immaculate, leading us quickly down towards the A712, where we could see traffic for the first time in ages.

We turned right onto the A712, which wasn’t all that bad in terms of traffic, especially as we were riding mostly fast downhill all the way to the next junction. At the junction, we turned right again onto the A713. Although we were pretty much in virgin territory with this ride, I did recognise the Ken Bridge hotel from the time a few years ago when we rode a circuit round Loch Ken.

The A713 was moderately busy, and with a long, lazy left bend to the road, a slow, heavy lorry had trouble seeing far enough to overtake, leading to bit of a tailback behind us. Once it managed to get past, we returned to more peaceful riding, but we were still keen to get back onto the minor roads as soon as we could.

A small mental miscalculation meant that we arrived at St John’s Town of Dalry a couple of miles earlier than I had expected. Since that was to be our lunch stop, it was a very welcome mistake. We spied a catering truck in the grounds of the seemingly closed Lochinvar Hotel and ordered some lunch, then sat and ate it out in the sunshine at one of the benches.

We were fed and underway quite promptly, heading through Dalry and out steeply via Main Street, before turning right onto the B7000. This was a steady climb on the map, but in reality, it was more a series of undulations with an overall sense of gaining altitude. The views out to the left were beautiful, and we felt like we’d discovered yet another great cycling road. 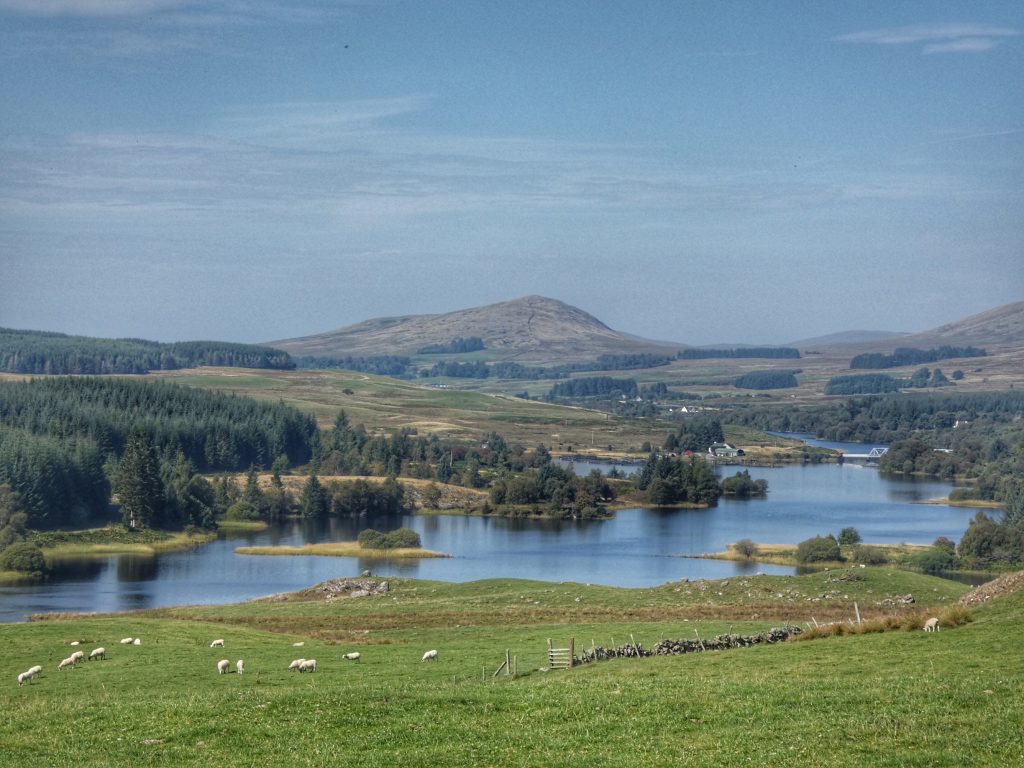 At a sharp bend, we came to a bridge over the Water of Ken. I was trying to see over the parapet as I crossed, but it was a bit too high, so I stopped at the far end and walked back to have a peer over the side at the waterfall that I could hear. It looked lovely, and what’s more, over the other side was a mini ravine, where the water flowed dark and deep away from the fall, then opened up into a large pool.

In the warm sunshine, it looked so inviting. I told Colette that was the kind of place I’d love to have a dip if I ever got the chance. Then I thought, why not? The sun was out and I was feeling hot. We had plenty of time and we were there by ourselves, so if I didn’t do it now, when would I ever do it? 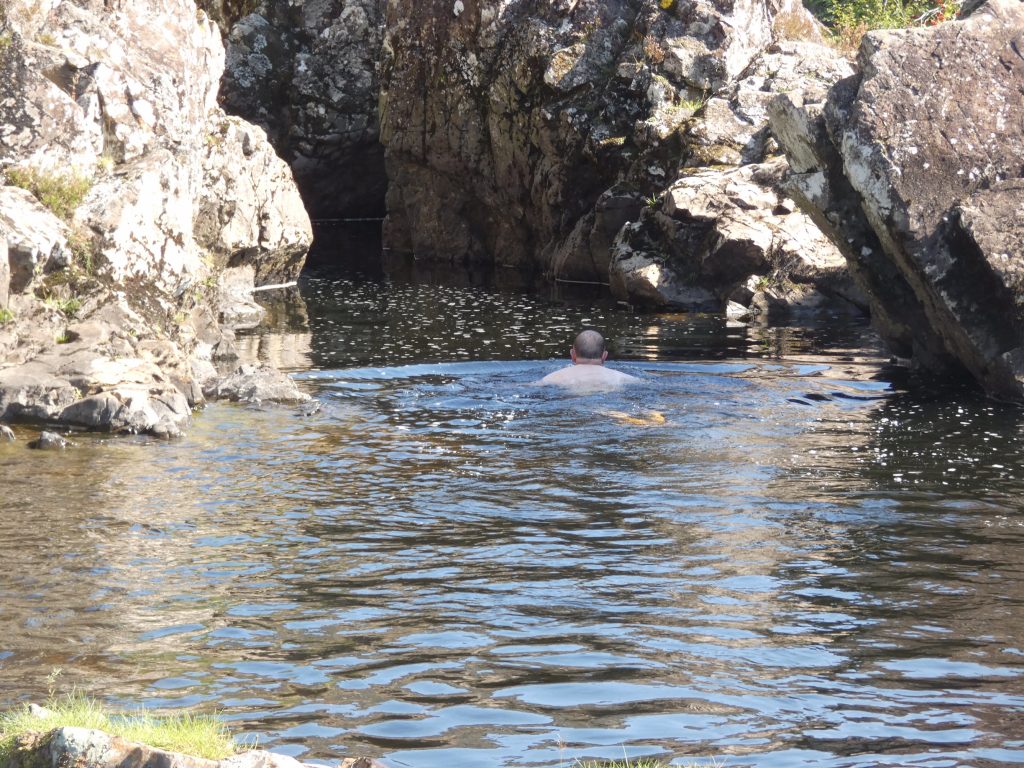 The only problem was that I didn’t fancy going in in my cycling shorts. I’d decided on a skinny dip when we noticed a couple with a dog pull up and head over to the water side. OK, shorts it would be, and I’d deal with the consequences of cycling in a “wet nappy” later.

I got myself onto a flat rock next to the pool, splashed my face with water and then jumped in. The water was lovely and surprisingly warm (or maybe non-cold would be a better description). I swam over through the ravine with the intention of going under the bridge to the waterfall, but as I got closer, it became obvious that a large rock was blocking the ravine making further progress impossible.

No worries, I was happy to just have a quick dip, so turned around and scrambled out of the water. I dressed and dried off very quickly (apart from the pad of my cycling shorts). As we cycled off, I was feeling energised and refreshed, which was good as there was a short sharp climb lying in wait at the far end of the bridge.

At the top of the short effort, we turned right at a T-junction and cycled onward into open moorland. After crossing the Water of Ken once more, we began our final climb. The scenery continued to delight, so I was pleased not to be powering up the gentle gradient, and was thus able to enjoy it for that bit longer. Finally we topped out, and the six mile descent that followed took us all the way back to our starting point in Moniaive.

A couple of Magnums and some cold bottled water were procured in the local store as a necessity, as this was such a hot day, albeit the last scorcher of the year. My shorts were nearly dry by the time I got back in the driving seat for our return home, and the lack of chafing was both welcome and encouraging for future impromptu swimming adventures, although they will remain very much weather dependent.