With a good weather day forecast and looking for some inspiration for a new location for a ride, Colette suggested that we visit some of the seaside villages of Fife. For some reason, we haven’t really spent much time cycling in Fife, so it was worth looking into.

I didn’t really have much idea of where to start when plotting the route, other than we would be having a chippie lunch in Anstruther. I started from the village of Ceres, fairly centrally located in the Kingdom of Fife, and plotted a route to the coast and back. As this was only 30 miles, I then added a little extra detour to bring up the mileage to a more worthwhile 42 miles.

We set off in the car on a still and foggy morning, hoping that the mist would burn back by the time we got to Ceres. We parked up in a handy car park and got set up with the fog still lingering and had to wear an extra layer to start with.

Heading south, we progressed along quiet roads, climbing to start with, through rolling terrain. Unfortunately, we couldn’t see any of the scenery due to the mist. After a few right turns, we were heading back north briefly on a busier A-road, till we took a left and east onto the extra loop I’d added in.

We were enjoying the mainly traffic-free minor roads, which took us to the high point of the day, somewhere to the west of Clatto Hill (which we couldn’t see). After descending, we turned east and passed through the village of Bonnybank, which took us onto the A916.

The main road wasn’t as busy as I’d feared, and a few miles later, we turned off onto a quieter B-road. With our mileage-adding detour finished, were now heading towards the coast again, when we took another small detour – this time to make sure we came into Upper Largo from the right direction.

Although we haven’t cycled in this area before, I know it well enough from trips in the car, and the road from Lower Largo to Upper Largo I remember to be both steep and busy. I didn’t want us to be crawling up there and causing a tailback of impatient drivers. So I took us into Upper Largo via a series of minor roads.

The roads were quiet for sure, but they weren’t without their undulations, including the steepest climb of the day, which was thankfully quite short. There was a fast descent into Upper Largo, where we met the A917 and the predicted constant stream of traffic flowing through the otherwise pleasant little village. 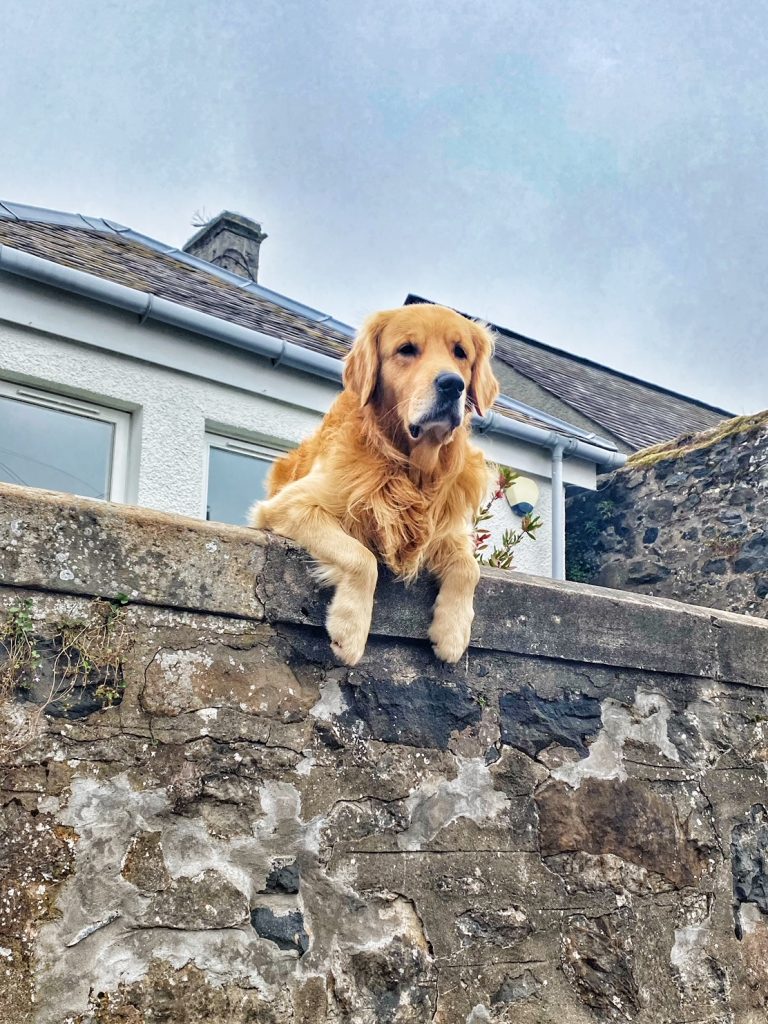 We received a warm welcome as we entered Upper Largo

When we got a chance, we inserted ourselves into the flow and cycled east out of town. The traffic was busy but there were enough breaks in the oncoming flow for cars to pass without too much of a delay. However, compared to the empty roads we started the day on, this wasn’t very pleasant. At least we were only on the A917 for a couple of miles before turning off onto the B942, which I presumed would be much quieter.

In fact, the B-road was just as busy, and lasted for another 3 miles, passing through Colinsburgh, where a traffic jam was leading to some angry shouting. Further on, a convoy of vehicles headed by a slow moving horse box caught up with us, and some very dodgy overtaking ensued. We were glad to see the back of this road when we took another small diversion, which brought us into Pittenweem from the north. 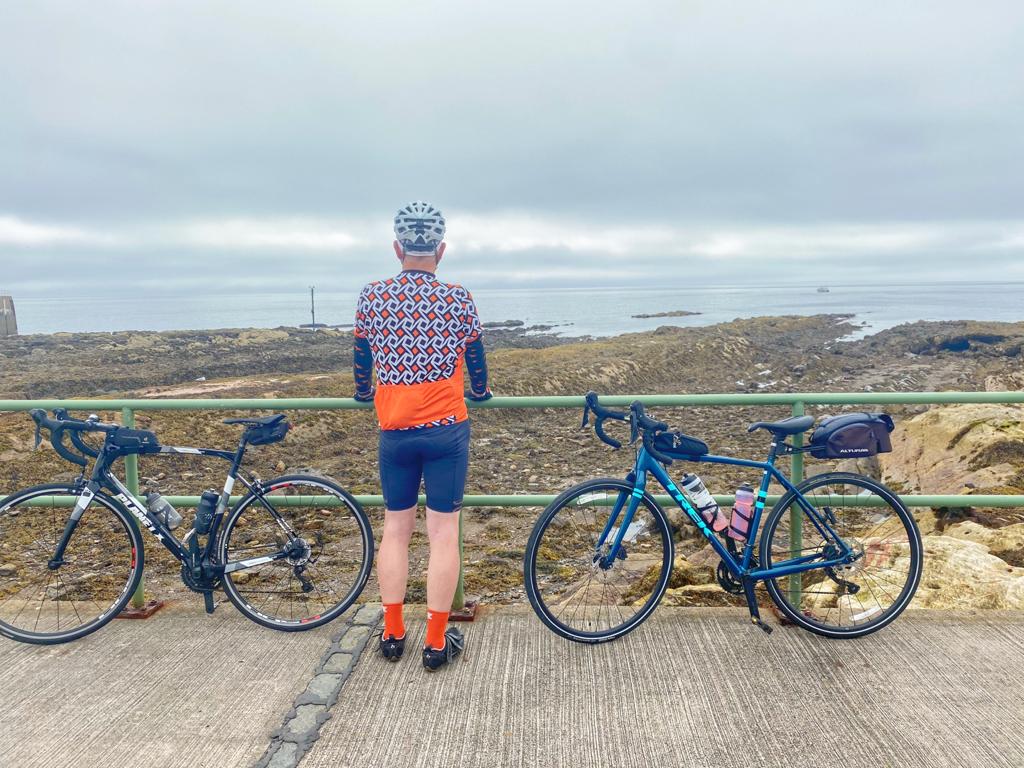 We decided to have a trip down to the harbour for a quick look around before getting back on track for Anstruther as it was getting on for lunch time. By now the mist had mostly lifted and the sun was beginning to break through, giving us a much better view of the coastline.

Leaving Pittenweem, we were back onto the A917 and all the associated traffic, but it was only for a short while, as Anstruther was just a short ride away. Entering the town, we were immediately stopped by some major road resurfacing works, involving traffic lights and a convoy system. We avoided this by taking some minor roads and rejoined just after roadworks, thereby craftily avoiding riding over sticky fresh tarmac. 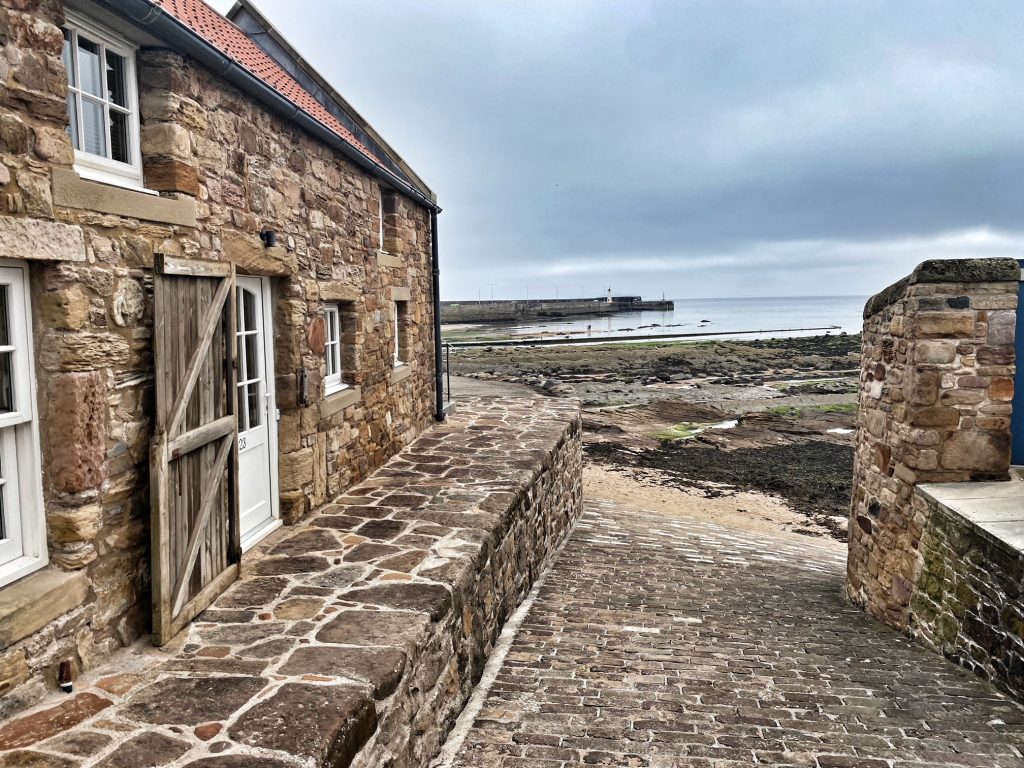 A view from our diversion round Anstruther

On finding our way to the harbour, our next aim was to locate the award-winning chip shop to get our lunch. The last time we were there, we got our fish and chips from the “wrong” shop, although they were pretty good to be fair. After consulting Google, we found our way to the Anstruther Fish Bar. 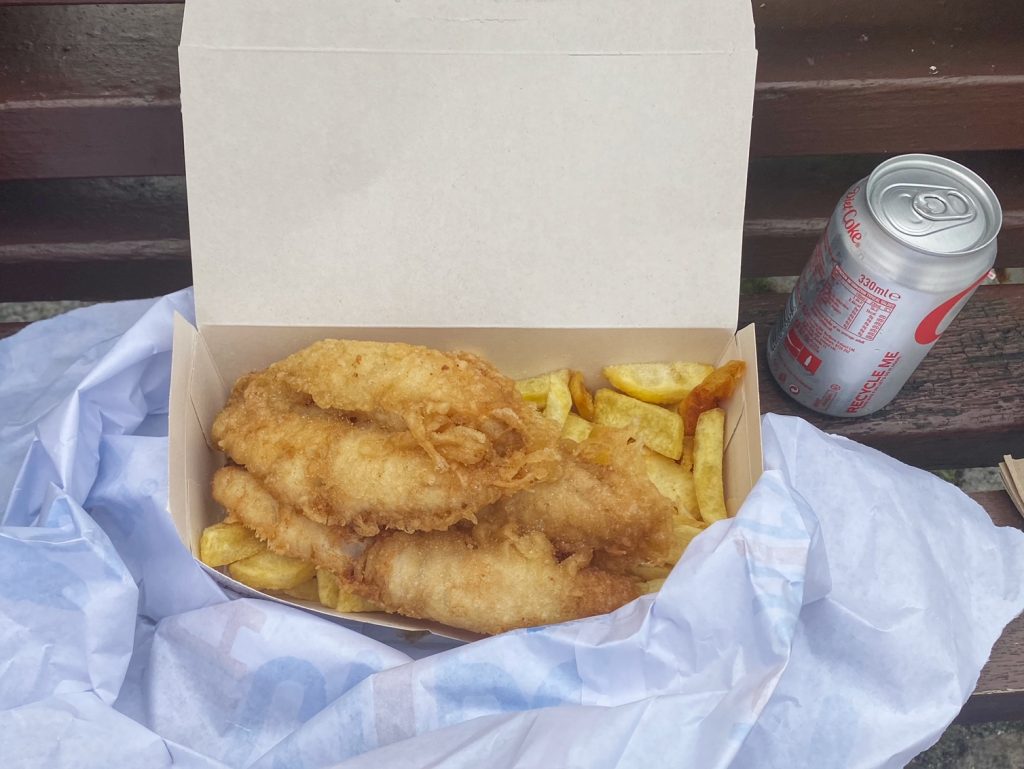 It was notable how much busier Anstruther was than Pittenweem. The harbourside road was thronged with visitors. There was a small queue for the fish bar, but it can’t have been more than about 15 minutes before we were tucking into freshly-cooked fish and chips. Absolutely delicious, and one portion was plenty between two. 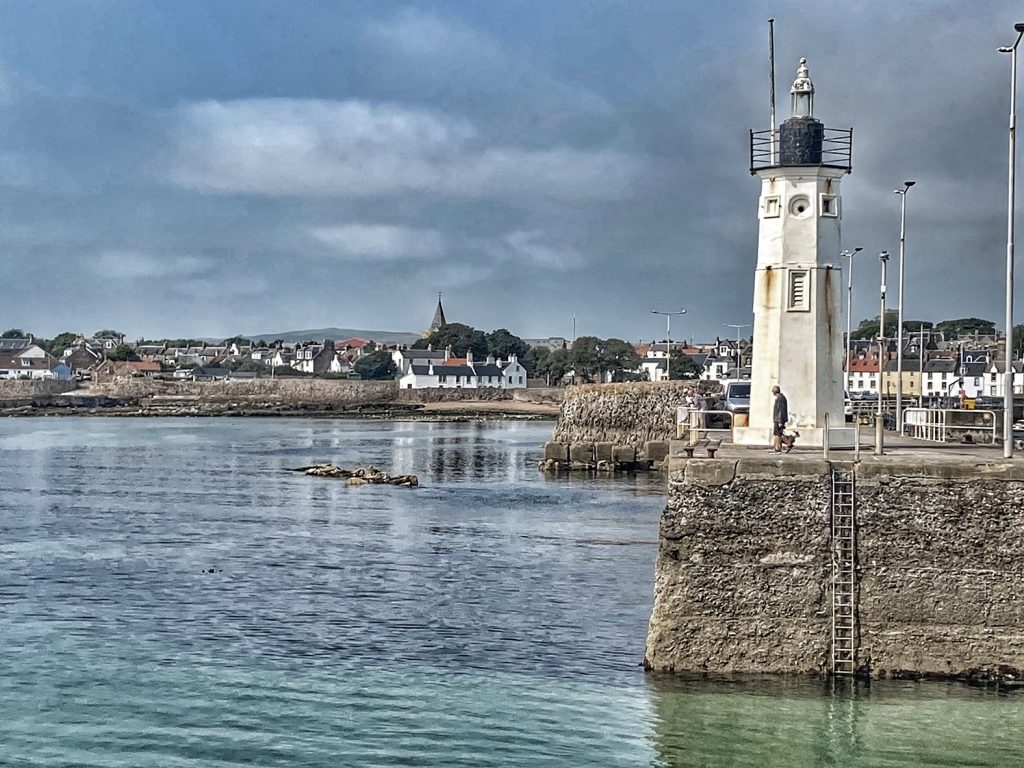 Colette went off looking for photo opportunities, going all the way to the end of the harbour wall, while I cleaned up and binned the rubbish. Then we set off vaguely northwards out of Anstruther on the B9131, heading back to our starting point in Ceres.

The ride back was effectively a 6 or 7 mile-long climb, although the gradient was never all that steep. The roads were in pretty good nick and the now hot sun bearing down on our backs made it easy to imagine that we were cycling in Spain. The roads here were by no means quiet, but the level of traffic was quite bearable compared to the A917.

We passed a sign for Kellie Castle and tea rooms. The latter sounded like it might be worth a visit, but it would have involved a 6-mile detour from our chosen route, and that was just a bit too much, so we plodded on, intending to have refreshments after we finished the ride. In fact, it I’d bothered to stop and look at the map, we might have been able to visit without adding much extra distance. Something to keep in mind for a possible future visit.

On our return, with the fog now gone, we had a chance to see more of the countryside. The rolling agricultural heartland of Fife opened up before us in all its colours. Although more than likely coincidental, it’s apt that Ceres was the Roman god of agriculture.

Our final stretch of road leading to the village looked like it was recently resurfaced in places, and took us onto a fast descent. I had to brake quite hard to stay at 20 mph as the road narrowed through the houses of Ceres. We saw much more of the quaint little village on our return, and it had a busy vibe with plenty of people out and about.

We might have visited the tea room at the folk history museum next to the car park, but it was booked for a private event, so we just headed home and stopped at the first Co-Op we could find on the way for some Soleros, which hit the spot very nicely!

Overall, we were pleased with this rare foray into Fife, but we could make it even better by giving the ~A917 / B9171 a big body swerve. Any repeat would most definitely need to include another yummy chippie lunch at Anstruther!