It had been a long time since we last cycled with most of our Monday Madness chums, but today we had a chance to have a ride with a couple of them: Fiona and John. They were keen to go over the Granites and fit in a lunch break at Fiona’s sister’s house near Peebles.

Colette was a bit concerned about the length of the ride, not having ridden that far for about a year. I was also a little worried about the forecast, with a chance of showers. However, it was a nice bright start to the day, so I decided to take my summer bike and was keeping my fingers crossed that the rain would stay away.

We left North Middleton, across the A7 and up past the quarry towards the start of the Granites climb. Once there, we took it easily so we could chat, and there was a lot of catching up to do. Reminiscing too, since the Tour of the Algarve was on telly the day before, and the finish at the top of Foia reminded us of the scary descent we experienced there with Fiona a couple of years ago. Shivering with cold and battling a howling gale, we were glad to make it down in one piece. 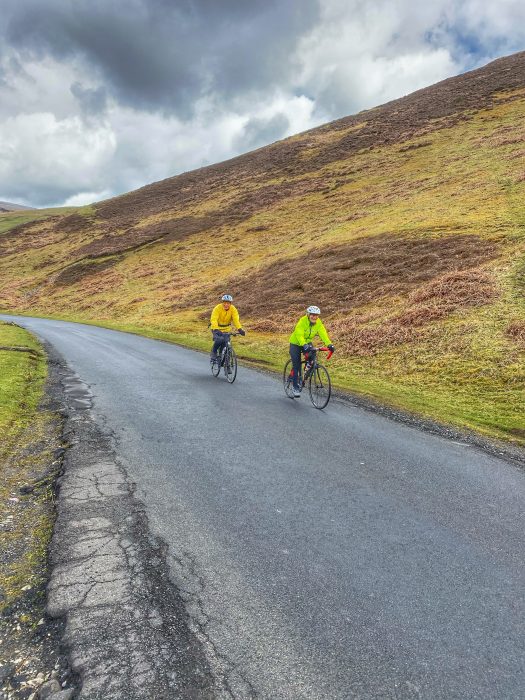 Today we were more suitably attired, and there was hardly any wind to upset us as we freewheeled down the descent after the Granites. After that, we continued to climb again as far as the Piper’s Grave. Before the descent to Innerleithen, I made sure to warn Fiona and John about the state of the road coming up. It was horrible the last time Colette and I went this way. However, I was happy to be proved wrong, as the worst of them had since been filled in.

As we approached Innerleithen, we found the golf course to be busier than ever – a clear sign of the post-lockdown bounce-back. Continuing into the town itself, we felt the temperature drop a few degrees as usual. The local geography seems to trap the cold air there. 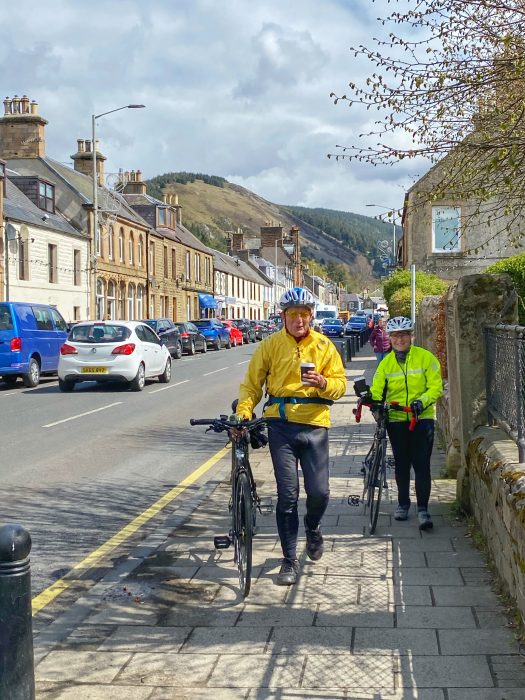 We stopped at Adams bakery for some hot pies to transport to our lunch stop that was coming up. We also bought coffees and found a spot in the sun to warm up a little as we drank them. I was so glad that I hadn’t called off due to the potentially iffy weather forecast, as I was really enjoying the relaxed ride and the company.

It was decided to head towards Peebles via the cycle path. Usually it is fairly busy with cyclists and walkers, but it was particularly quiet today for some reason.

After cycling through Cardrona, we found that the building work next to Nashy’s coffee shack had been completed and the normal cycle path had been reinstated. No more detour and ducking as you go under the bridge!

Approaching Peebles, Fiona suggested leaving the path and riding into town on the main road. The principal reason for this being the tricky switchback on the cycle path. I said that I’d prefer to do the switchback for a bit of fun, and would rejoin them further down the road.

So off I went, and nearly fell off as I turned up and sharp right. The path seemed somehow much narrower than I remembered, causing me to stall but not enough to stop completely. I recovered and continued along the path, joining the main road just as John, Fiona and Colette were approaching.

Shortly after that, Fiona called out to stop and go through a gate into the park, where we negotiated a shortcut to miss out Peebles town centre. We had a bit of a wait to cross the footbridge, as social distancing meant that you needed to wait for the bridge to clear completely of traffic coming towards you before starting to cross.

After crossing, we turned left and cycled out of Peebles. Shortly after that, we reached Fiona’s sister’s house, where we wheeled our bikes into the back garden. Eleanor had set out seats for us to have our lunch in the sun. Our pies were still nice and warm, and tasted delicious. Colette’s meat and potato pie in particular was a revelation (I’m definitely going to choose that one next time!). I made a new friend in Isla, Eleanor’s cavalier King Charles spaniel, and we were treated to coffee and cakes after lunch.

At this point, we had a decision to make: to go back either via the Meldons or the way we came. We decided on the latter, as we all hate the bit of road after Eddleston. The best way to go back was not through Peebles however, but rather to continue on the minor road to Cardrona, then pick up the cycle path.

That involved a couple of short hills. My Wahoo showed the gradient gradually increasing up to 12% on one of them, which in retrospect was why Colette groaned when she saw the hill. It was over quickly though, and the descent to Cardrona was over even quicker.

Soon, we were back in Innerleithen and then turning north for the final push home. There was a bit of a headwind as we rode through the golf course, but no need to worry. If that is the case, it usually translates to a tail wind a mile or so further on, as the climb actually begins. Which it did.

We were well entertained by the bird life as we cycled up towards the Piper’s grave. Lapwings flapped acrobatically and oyster catchers and curlews gave us some close fly-pasts to keep our minds off the uphill grind. 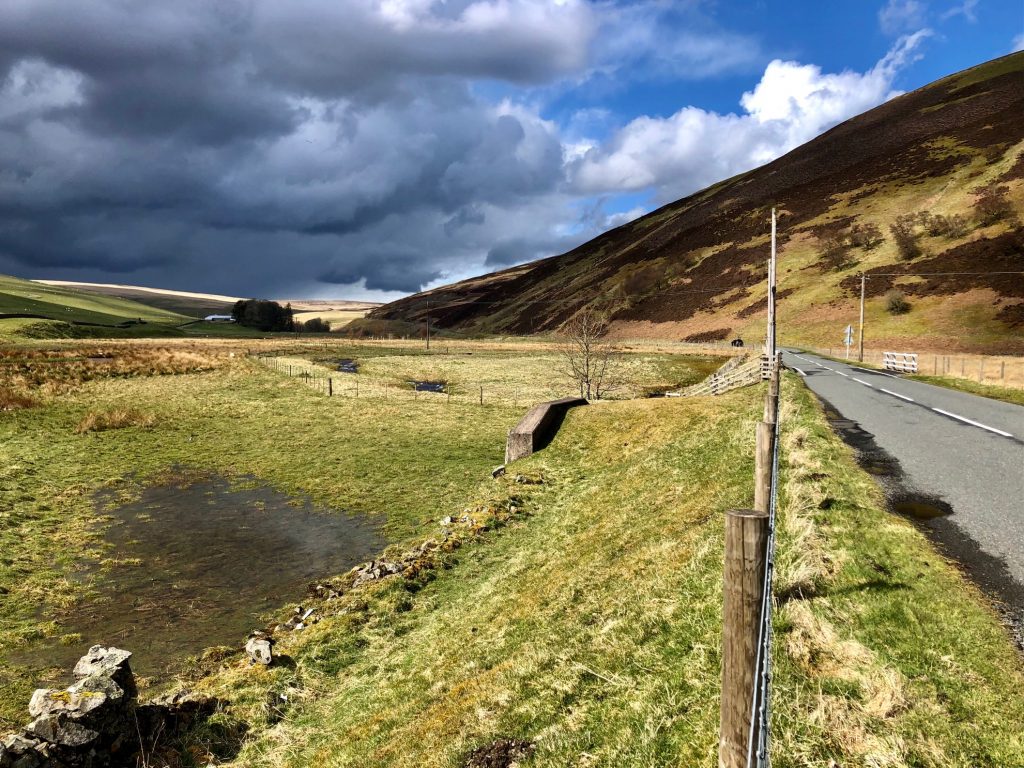 A quick water break was had at the lay-by at the top, then we paused again to reconvene after the following descent. I took a photo of the road ahead, not really worrying too much about the dark cloud that was appearing on the horizon.

However, as the final climb progressed, the cloud looked bigger and darker and angrier. Near the top, we felt the wind get up and spots of rain started to fall, so we stopped for a moment and all those in possession of a waterproof put it on.

Then, once we had topped out and approached the start of the descent, we rode into a hailstorm. The stinging hail was unbearable, especially when it hit your lips. I sucked mine in to protect them and descended like a toothless crone.

Colette got ahead and at the turnoff for Middleton carried straight on, deciding to go home via the A7. When Fiona and John appeared, we decided to take the minor road instead, which turned out to be a mistake. The road was muddy and gritty, making braking noisy and less effective for Fiona and me, who were using old-fashioned caliper brakes. John was fine, with his disc brakes and mudguards. I wished I’d taken my winter bike after all!

Finally we reached North Middleton just as the squall subsided.  Soaked, freezing  and shaken, we had somehow made it. It was an experience to rank alongside the Foia descent that we were remembering about at the start of the ride. Despite that, it was a great day out, and Colette was especially chuffed to have coped well with the bigger than normal distance. Onwards and upwards…