We were persuaded to take an extra cycling holiday this year (didn’t take much arm twisting) to try out a new location to us, the Algarve. We did try to visit last year, but our flight was cancelled amidst the Beast from the East, so I guess this is take 2. The Portugal exploration team comprised Colette and me, along with Alison, Janette, Fiona and Sheryl.

After one day of getting our bearings, day 2 was an assault on Foia, the highest point in the Algarve. We headed away from our hotel at Praia do Vau in the direction of Alvor, but as we reached the skydive centre, everything ground to a halt in a traffic jam. There were roadworks, which held us up for maybe 10 minutes. It might have been less, but the traffic from the other direction kept on coming when the light was green for us.

As we passed through the roadworks, Sheryl rode through a sharp hole in the road, and she was lucky not to come a cropper. Luckily she was riding a gravel bike with wide tyres to absorb the hit.

After the roadworks, the line of oncoming traffic was stationary for at least half a mile, explaining their impatience. On the narrow road, that made it impossible for the bolus of cars behind us to overtake, so we had to pull over and let them pass, which also gave a chance for a good check of Sheryl’s bike.

We then had to negotiate a triple roundabout to get us onto the N125, heading west. Although a busy road, there were wide verges on either side, which made for safe cycle lanes. At the first roundabout, we left the N125 and joined the EM532, heading north towards the hills.

This new road was quieter, allowing us to feel relaxed for the first time, although the odd car did have to squeeze past, and our experience already has shown us that the drivers in Portugal are not nearly as considerate as those in the Spanish places we’ve visited. In fact, they are no better than British drivers!

One of the potential drawbacks of the route I’d drawn up was that we didn’t pass through any towns or large villages, so we weren’t guaranteed a coffee stop until the cafe at the top of the mountain. So when we spotted a roadside cafe after only 9 miles in, we decided to stop, as we might regret it later.

The coffee was strong and bitter, needing extra sugar, but at only 70 cents a cup, it was hard to complain!

Suitably caffeinated, we got going again and took the left turn onto the CM1057 a bit further on. As we progressed, we got further and further from traffic and began to really enjoy the quiet country roads. We were passing through an area dotted with low, pyramid-shaped hills, the origin of which Fiona (our resident Geography teacher) was able to explain. But I’m glad there wasn’t a test! 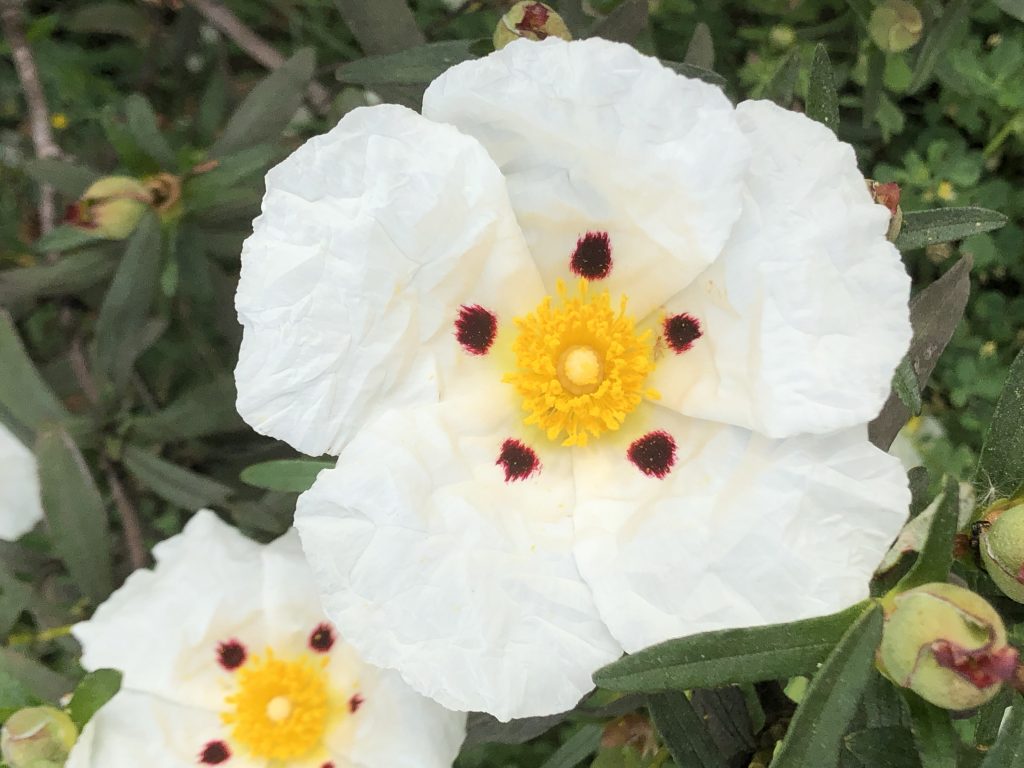 One striking thing about the hills was that they were carpeted in a type of shrub with large white flowers. Very pretty. The nature of the terrain meant the road became quite undulating here, but nothing particularly steep. It was all just the kind of thing I’d been hoping for. Slightly incongruously, we occasionally heard the noise of speeding motorbikes here, although we didn’t actually meet any on the road.

We rejoined the EM532 at Montes de Cima, where there was a decent-looking coffee shop, which we might have stopped at had we not gone for the previous one. Mental note made… 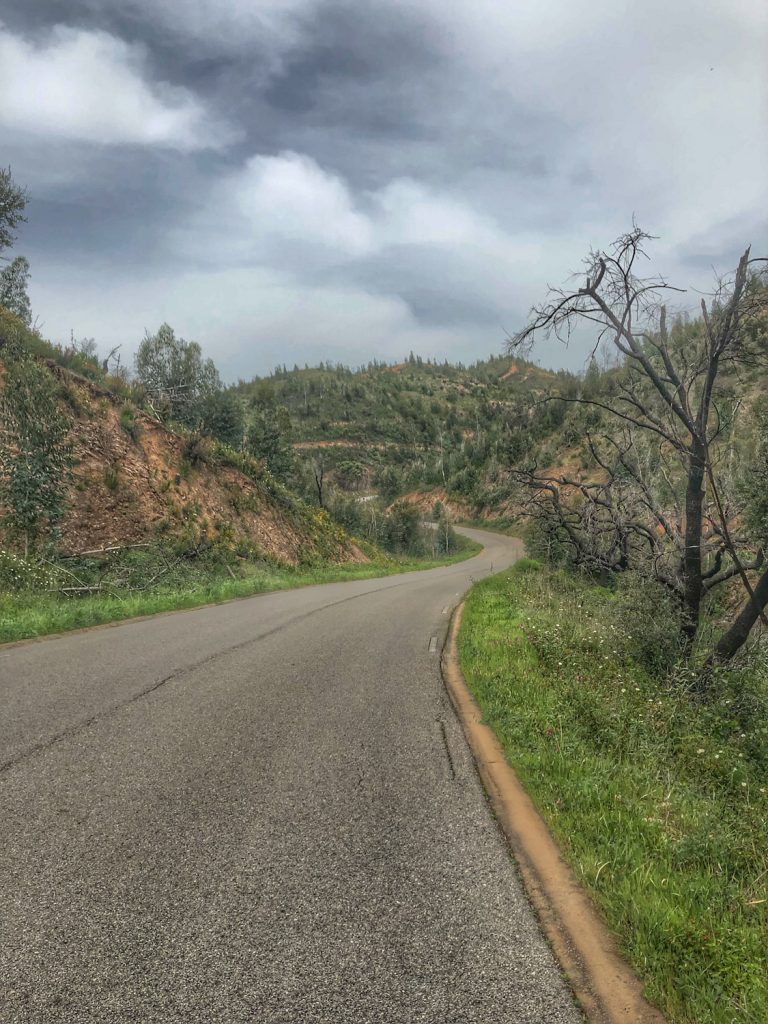 Everywhere there were reminders of recent forest fires in this region

This also marked the end of the low hills and an entry to the mountainous region. There was about a mile of quite tough climbing with gradients of 8-10% that slowed us down a bit. Not Janette though, who sailed off ahead, getting practice in for Mont Ventoux later in the year.

With the hard bit over, we regrouped then turned left at Casais, which put us onto another mile or so climb at a more enjoyable gradient. I was amused to see what looked like peas growing along the side of the road. I picked a pod as I was going and found little pea-like things inside, although I didn’t eat them, much to Sheryl’s relief. There were other wild flowers growing in abundance, including yellow lupins. It’s a botanist’s dream this place.

As we got higher and the view opened out, we could see a large race track down below, which explained the loud motorbike noises we heard earlier. 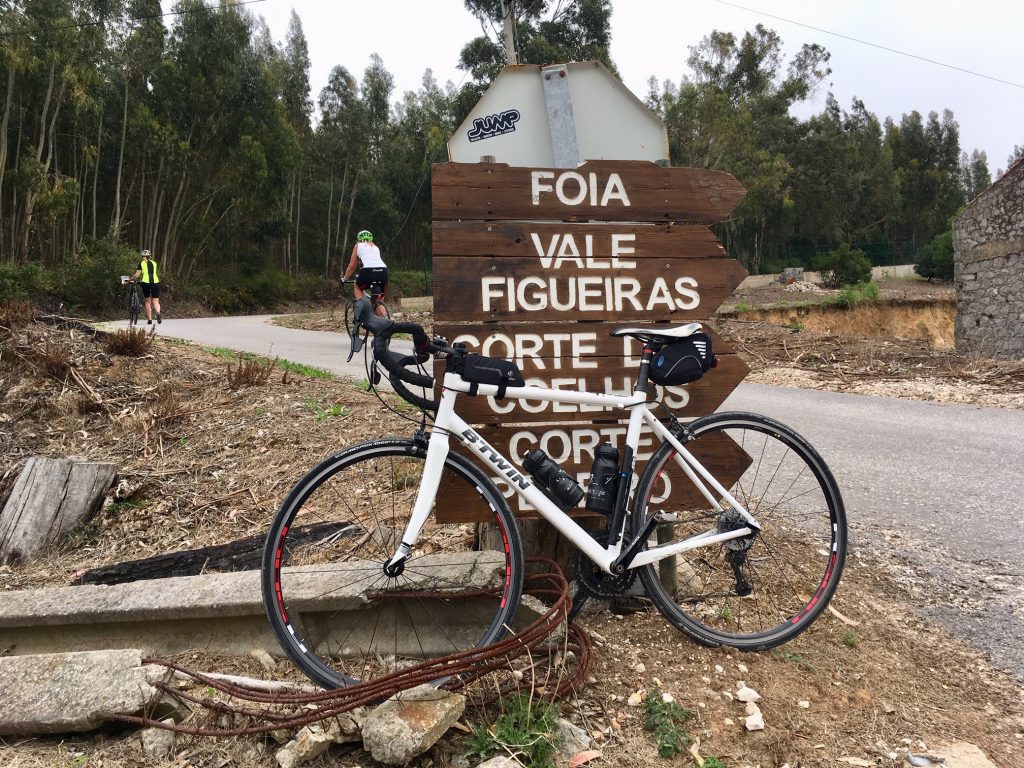 We regrouped again where a single track road led off to the right. It was marked Foia, and I had chosen to go this way up the mountain, as it was likely to be fairly free of traffic. It did look quite steep to start with, which I hoped was just some introductory steepness that would soon level off. Unfortunately, that was a vain hope. It was quite a struggle to get to the first easement of gradient, where we all gathered to get our breath back. 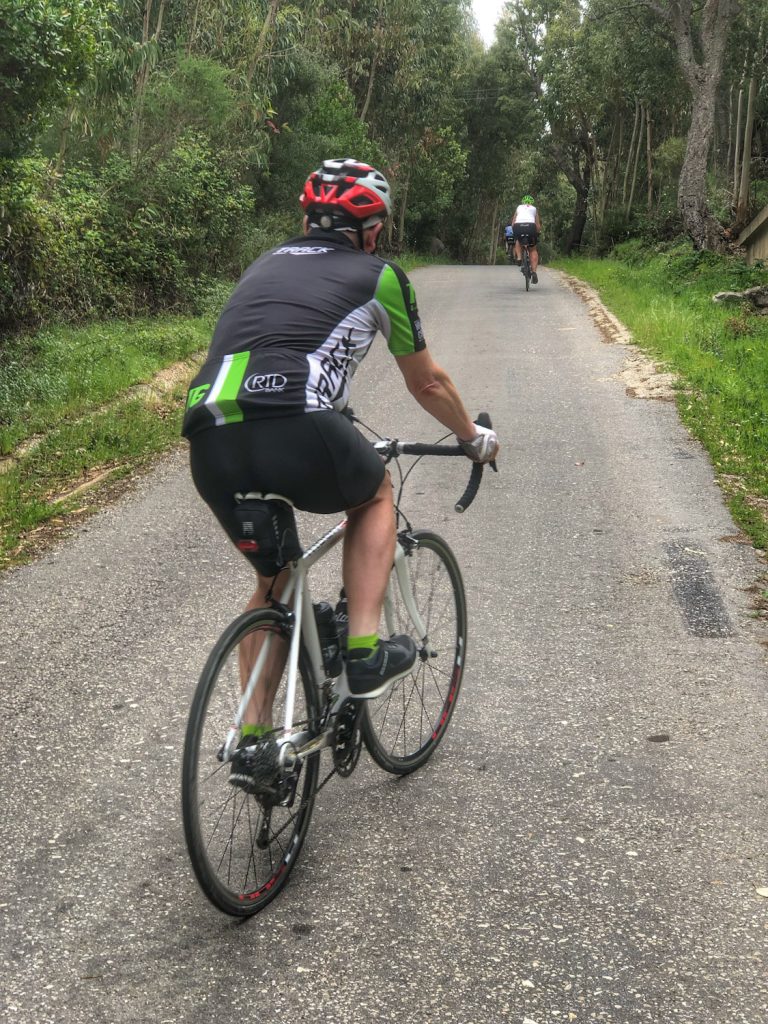 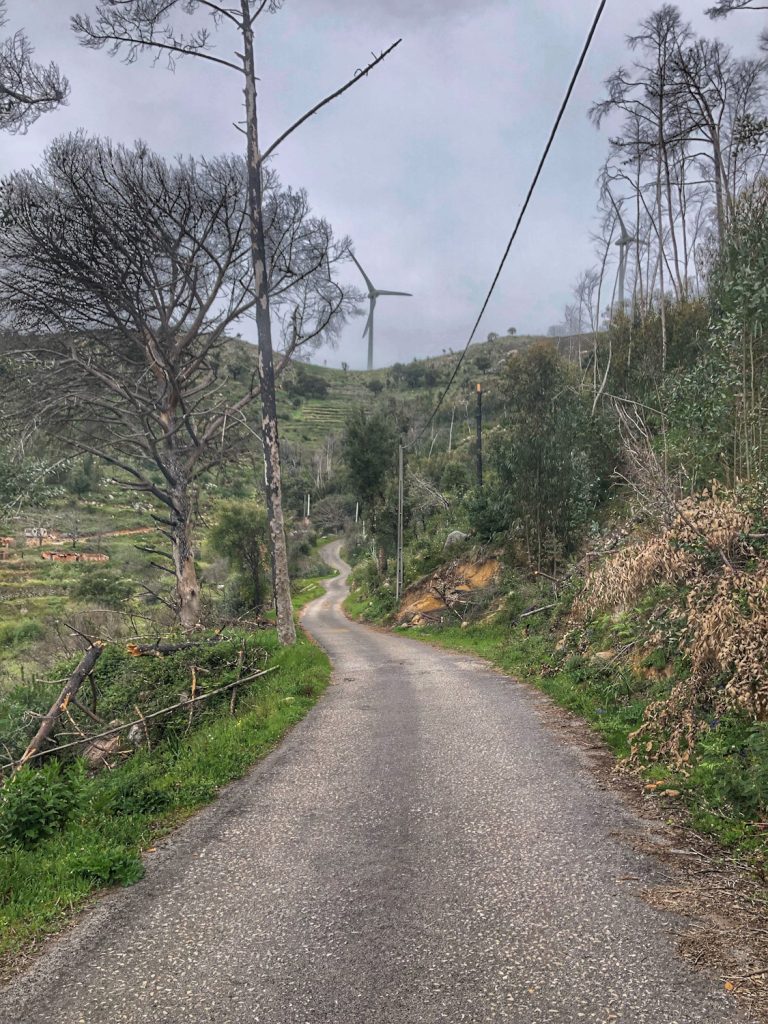 Hard going in places, but a lovely quiet road.

It was a lovely road, winding its way up the mountain through a forest of eucalyptus trees. But it did keep hitting us with these difficult ramps of 15%+ gradient. This section was less than 3 miles long but it seemed to take an age to complete, ending where we met the N266-3 road.

Right next to the junction, there is a layby with picnic benches, and across the road is a font where fresh spring water issues from the mountainside. It tasted good, and nearly empty water bottles were replenished.

Next, we just had to ride another mile or so to the top of the mountain, which was a doddle since the gradient was now in single figures. As we completed the final part, the trees vanished, to be replaced by a rock garden of heather. The road corkscrewed round the top of the hill, coming out at a visitor centre and radar station.

I made my way to the viewpoint area just as a squall descended and the view disappeared. A chair flew across the road from in front of the cafe and didn’t stop till it hit a rock on the other side. It was hard to stand, and then the rain started!

As the others arrived, we had to take shelter from what felt like sleet but was more probably hail that was starting to melt. More chairs took off and smashed into the bike rack – luckily missing any bikes. Alison sensibly decided to hide hers round a corner out of the wind.

We then retreated into the cafe and had lunch. As we ate, the rain stopped and it started to clear a bit but the wind was still howling. I was the only one who didn’t bring any extra layers or even arm warmers, so I was feeling cold during lunch in my damp short sleeved jersey. It didn’t help remembering the fact that you always feel colder after lunch. So before we left the cafe, I grabbed a handful of paper towels from the toilet and stuffed them up my jersey.

Standing shivering outside, I couldn’t wait for the others to get ready and just launched straight into the descent. As the road unwound round the mountain, the wind went from behind me to a full on side wind. That was pretty scary, forcing me to slow right down. I was also shivering intensely with the cold. That had a strange effect on the steering, making it feel quite wobbly. Under normal circumstances, this should have been a great fun descent, but I was just keen to get it over with.

Once we reached the eucalyptus forest, there was a bit of shelter from the wind, and despite still feeling cold, I was now enjoying myself. The road was littered with debris blown from the trees but nothing dangerous. Soon, we had arrived in Monchique, where we paused at the side of the road.

Fiona arrived also shaking with the cold, in an almost hysterical state. Alison was also shivering, and had felt the same odd effect on the steering. She even stopped a couple of times on the descent, thinking there was something wrong with her wheels. Sheryl told us how to shake our arms to get the blood flowing again, which really made a difference. It was warm in Monchique, so we got back to normal quickly and were then ready to continue the descent on the N266.

Our Jet2 rep had recommended that we visit the village of Caldas de Monchique, so we detoured through there as we passed. It was akin to a small version of Port Meirion, except that the buildings were larger and not arranged quite as photogenically. I wasn’t happy with any of my photos anyway.

We didn’t stay long as we needed to get back on the road. I had originally planned to take the N266 all the way into Portimao, but cycling through the town was a bit of a nightmare the previous day and we were keen to avoid a repeat. So a few miles further down the road, we detoured right, using a smaller and quieter road heading towards Moinho da Rocha. Immediately, we were in peaceful cycling territory again. The fact that we had a few undulations to deal with was fine by us.

Finally, we reached the EM532 again, and reversed part of the road that we had taken in the morning. We again spent a short time on the N125 before approaching the area of the roadworks. In order to avoid that, I devised a cunning plan to negotiate a maze of back roads through the suburbs. Two small problems with that though: 1) some REALLY steep undulations were involved and 2) I kept getting lost! On top of that, the wee roads were so busy with people in a hurry that I began to wish I was waiting in a traffic jam instead!

Finally, we made our way to Avenue Henry Cotton, which took us past golf courses to a roundabout where we could see our hotel. Phew, we had made it back at last.

The day was a success in that we had made it to the top of the Algarve and back as planned and found some great roads worthy of repeating. Also, we had found some less good roads that we know to avoid in the future. The Algarve definitely has good potential for cycling: it’s all about choosing the right route…