It’s nearly halfway through January and we’ve still not ventured out for our first ride in 2021. We can’t blame COVID-19 for that this time, well not entirely, but instead the weather. It has been snowy or icy most days, and the couple that weren’t were rainy and windy. I suppose we would normally have packed the bikes in the car and driven down to the ice-free coast to get some cycling in, but that is frowned upon at the moment. Exercise should start and finish at your front door. OK then, we can blame COVID after all.

In the meantime, you won’t be surprised to discover that I’ve been using Zwift instead. Even Colette has been driven to using it too! And one of the things that has been preoccupying me is getting to terms with my new turbo trainer, the Elite Zumo.

If you have read last month’s post, I complained that there were no turbos available in my price range. I had my eye on the Zumo for a while, as it is about the least expensive direct drive interactive trainer, and it got some pretty good reviews from the likes of gplama and DC Rainmaker. So when it came back into stock, I went ahead and splashed out on one, and this is going to be something akin to a review of the Zumo then, focusing on the aspects I’m most concerned with.

First off, I needed to get it set up. The construction (connecting the legs) was straightforward enough. It also needed a cassette to be installed on the trainer’s hub. I eventually settled on an 8-speed 12-25 cassette.  This required the use of two spacers (provided), and I had to hold the cassette in place with a chain whip to get the correct tightness. Once I got that right, the indexing needed a bit of fine tuning for smooth gear changes, and I was ready to go. 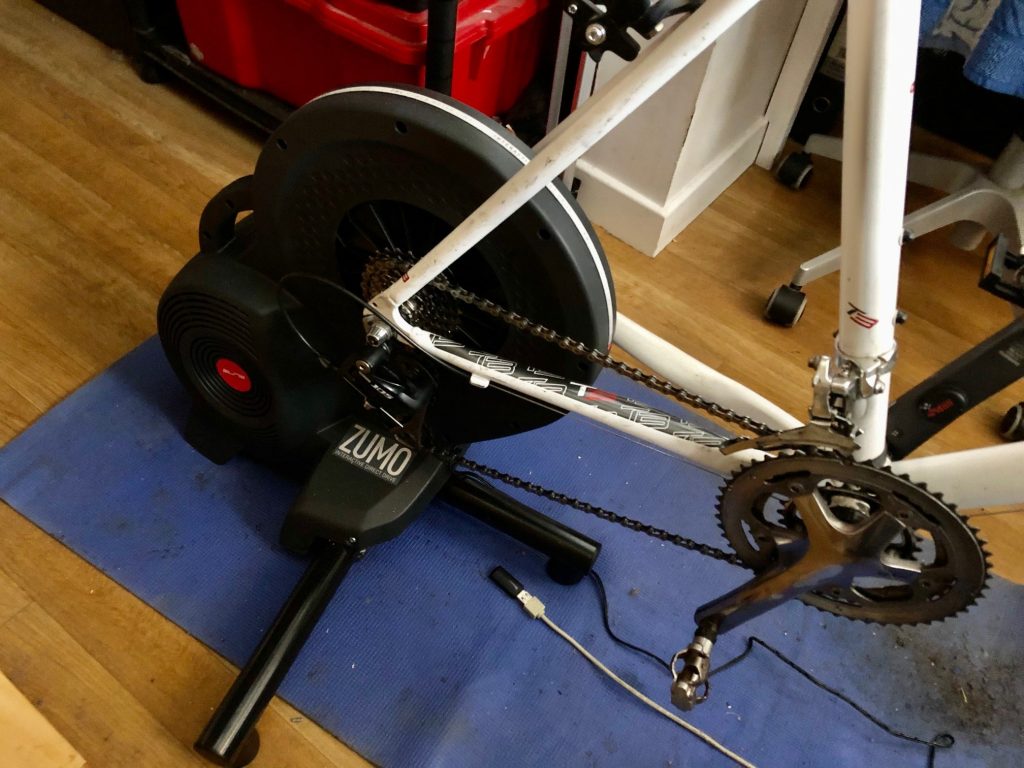 Here’s the new turbo in position. If this photo proves anything, it’s that I was more in need of a mat upgrade than anything else. Eeek!

For a quick first look, I got it connected to Zwift running on my PC (by Ant+) and tried out a short test ride. The trainer difficulty is set to 50% in Zwift by default, and this was more than enough to feel the gradients change as I tootled along in Watopia. On rolling terrain, my speed from the downhill was carried some way into the following incline, before the gradient started to bite. It all felt quite natural.

The big difference was needing to keep changing gear so much, which came as a bit of a culture shock, even though I was expecting it. I dialed down the “difficulty” setting a bit, so that I can sit in my 39 tooth middle ring most of the time, only needing the big ring for sprints and the little one when I’m completely done in on the Alpe. However, the more I get used to it, I’m sure I will start to increase the “difficulty”.

I tried the Zumo out on my PC and also with Apple TV. Pairing to the PC is via Ant+, however with the Zwift companion app running on my iPhone, I also have the option of pairing to the PC through that, using Bluetooth. With Apple TV, Zumo pairs with Bluetooth, and again, the companion app gives the chance to pair via the iPhone too. When using the PC, there were several options to choose from for power, cadence and controllable trainer. It is best to choose the “FE-C” option in each case.

On some days, I paired my 4iiii left crank power meter for power and cadence and chose “FE-C” for the controllable trainer. That worked just fine. However, when I tried the “Power Meter Link” option, where Zumo takes over your power meter as power source, things didn’t work so well. The problem was a long (7-10 second) lag between putting power down on the pedals and seeing the output on Zwift. So for example, I might have got myself onto a steep downhill and stopped pedalling, but my avatar carries on pedalling. Then when the gradient next increases and I start pushing hard, my avatar just sits there doing nothing and I grind to a halt! I don’t really see any advantage to Power Meter Link, other than the fact that it smooths out some of the natural power spikes that you get when using a one-sided power meter.

As for calibration, Zwift is supposed to offer a calibration option at the pairing screen. I only saw that on the Apple TV version, not when using the PC. You can also calibrate using Elite’s My E training app. Here, you pedal till you reach the specified speed, then stop and let the flywheel spin down to a halt. It’s a little concerning that you need to pedal significantly faster than the specified speed before it tells you to stop, but if you are expecting this, you just need to increase speed very gradually and be ready to stop as soon as the message appears. Once calibration is complete, it gives you the spindown time in milliseconds.

Interactive trainers have two different modes of operation. The first, sometimes called “sim” mode, is for free riding, where the resistance changes according to the gradient as described above. The second, known as ERG, is specifically for workouts, where you are aiming to hold a specified power output for a specified time interval. With my old “dumb” trainer, it was up to me to use my cadence, gear selection and manual control of trainer resistance to hit the required watts. In reality that was quite tricky, but with ERG mode, the turbo takes charge of the resistance and all you need to do is keep a steady cadence to hit the target. I was very impressed by the way the Zumo takes control of this – it works really well.

I originally expected that ERG mode would not be available if I was using my power meter for Watts instead of the Zumo’s own estimate. However I was wrong! It still works, although not quite as smoothly. But over an interval of several minutes, it holds very close on average to the target power.

This is the one area where I’m not really happy with the Zumo, after comparing the power output from the turbo with my power meter. I did my best to follow the recommendations for calibration by first warming up the turbo by pedalling at around 150W for at least 10 minutes before running the calibration. This gave a spindown time of typically 20,200 ms. 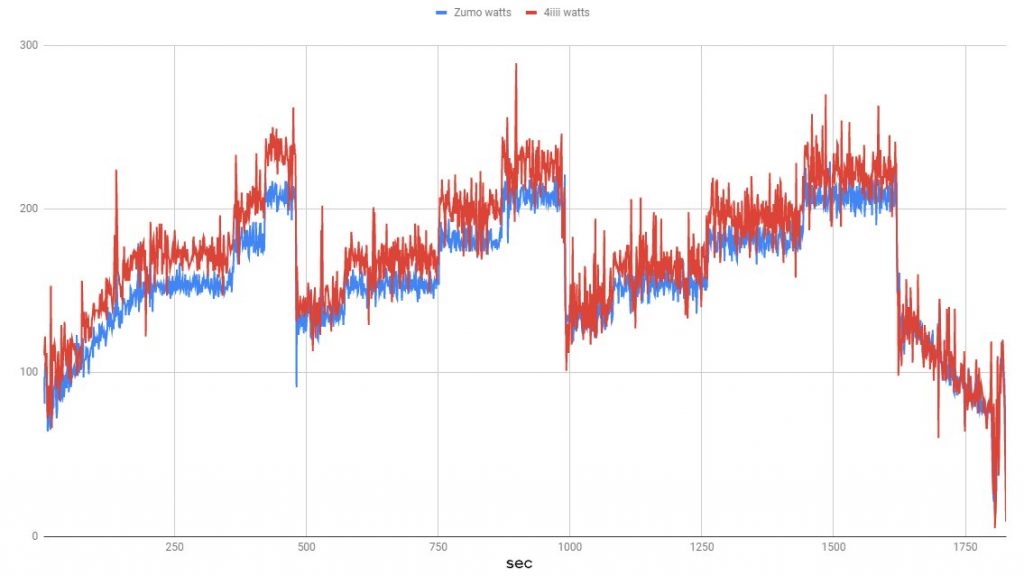 Comparison of Zumo (blue) vs 4iiii power meter (red) output during a workout. Zumo reports lower watts than 4iiii, though it gets less bad as the turbo warms up. 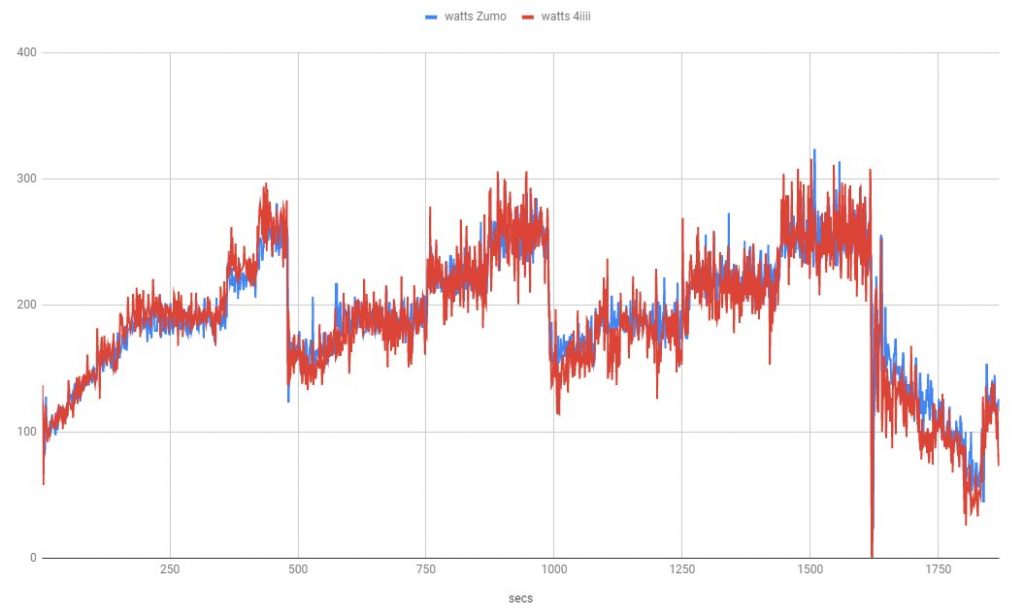 Then it occurred to me to try a cold calibration. This resulted in a faster spindown of 18,261 ms. I tried a workout and made the comparison, to find that overall the two power readings were in very good agreement. The Zumo was still under reporting watts until the first interval of 255W, but after that it was very close – less than 1% out on the final 3 minutes @ 255W!

So it is now OK for high intensity (for me) workouts. But if I want to do lower intensity rides at say 150W, the Zumo may yet be under reporting. I still need to check that out. But in the meantime, I have an easy fix – just keep using the power meter data and use the Zumo simply to take care of resistance changes.

There are a couple of potential factors that might lead to differences between the power output from my crank power meter compared to the turbo trainer.

First is power losses in the transmission – i.e. the gears and chain might be inefficient, leading to watts put in at the crank not transferring to the same amount in the turbo trainer. So you would always expect the Zumo to show a few watts lower.

Secondly, the single sided power meter is subject to possible bias if one leg is stronger than the other. I’ve heard it said that since the left leg power is simply doubled to give the power meter readout, then any discrepancy in power between the legs is doubled too, making it highly inaccurate. While that might sound sensible, it is in fact tosh.

The only way to tell would be to try out a dual sided power meter. I don’t have access to one of those, but I would love to put it to the test. I think the fact that my previous turbo over estimated power compared to the power meter, and the Zumo underestimates, suggests that my power meter, reading in the middle, might just be right.

My conclusion after writing screeds of this technical mumbo jumbo about a turbo trainer is that I REALLY NEED TO GET OUT FOR A PROPER CYCLE. I hope that can be soon.