After several weeks of coronavirus lockdown, Colette and I settled into sort of a routine. Of course we stayed home. Exceptions to that were the weekly shop (i.e. pickup of click & collect from the local Tesco) and near daily exercise, consisting of short local cycle rides in the uncannily good weather.

I made sure to follow the advice of the Scottish government. Professor Leitch repeated pretty much the same line as Michael Gove gave initially: up to one hour of walking, running or cycling per day was acceptable, starting from home. In England, the recommendation was later softened so that there was no time limit, but I saw no such proclamation for us north of the border. Eventually, we were told on 11 May that we could go out for exercise more than once, which was interpreted by most as go as long as you like, as long as you start and finish at home.

For my own part, that wasn’t much help, since an essential ingredient of the longer ride is a cafe stop. OK, the cafes aren’t going to be open now, but we at least need to be allowed to stop and have a nice picnic. So in the interim, we just stuck to our short solo cycles, where I took the opportunity to go that bit faster and enjoy my new carbon road bike, and push a few PRs into the bargain.

Then everything started to change with Phase 1 of the easing of lockdown. We were now allowed to stop for a picnic and to drive a short distance to the start of our exercise activity. Nicola did suggest a 5 mile limit for the drive, but in the next breath said that it would not be policed. To me, that sounded like “use your judgement”. It didn’t take long for us to start hatching a plan for a picnic ride…

We had heard that the car parks at many of the beaches in East Lothian had been closed, leaving the beaches pretty much deserted. So if we arrived on bikes, we could have a safe, socially distanced beach picnic. One of our favourite beaches is at Seacliff, close to Tantallon Castle. While it was possible for us to reach that beach on a day trip from home, it would be a lot easier to drive to Longniddry to start instead.

So that is what we did. We got set up quickly in warm sunshine. I had taken my hybrid bike so that I could take all the picnic things in panniers, including the bulky but essential picnic rug.

We headed for the coast road and quickly found that it was getting much cooler, requiring a stop to put on arm warmers. A haar (mist) was hanging over the coastline, reducing the visibility and temperature, while a few hundred yards inland it was lovely and warm.

Once we reached Aberlady, we moved away from the coast using the “quiet road” to Fenton Barns. It was warmer again, so the arm warmers came back off.

We continued to Kingston, where we turned left and headed towards North Berwick, passing Berwick Law on our right. After turning right at the traffic lights, we could feel the cooling effect of the haar once more, so arm warmers went back on.

It was only a few miles to Seacliff from here, so I was concerned that we would find the beach enveloped in mist and not really the best place for a picnic. We were going to give it a go anyway, but I started thinking of alternative picnic locations, just in case.

We passed Tantallon Castle (closed, like everything else at the moment) and a couple of minutes later, we reached the start of the road leading to Seacliff. The carriageway was mostly blocked off, with a car park closed sign and a man on a chair policing access to the private road. Luckily, as we were on bikes, he waved us through. 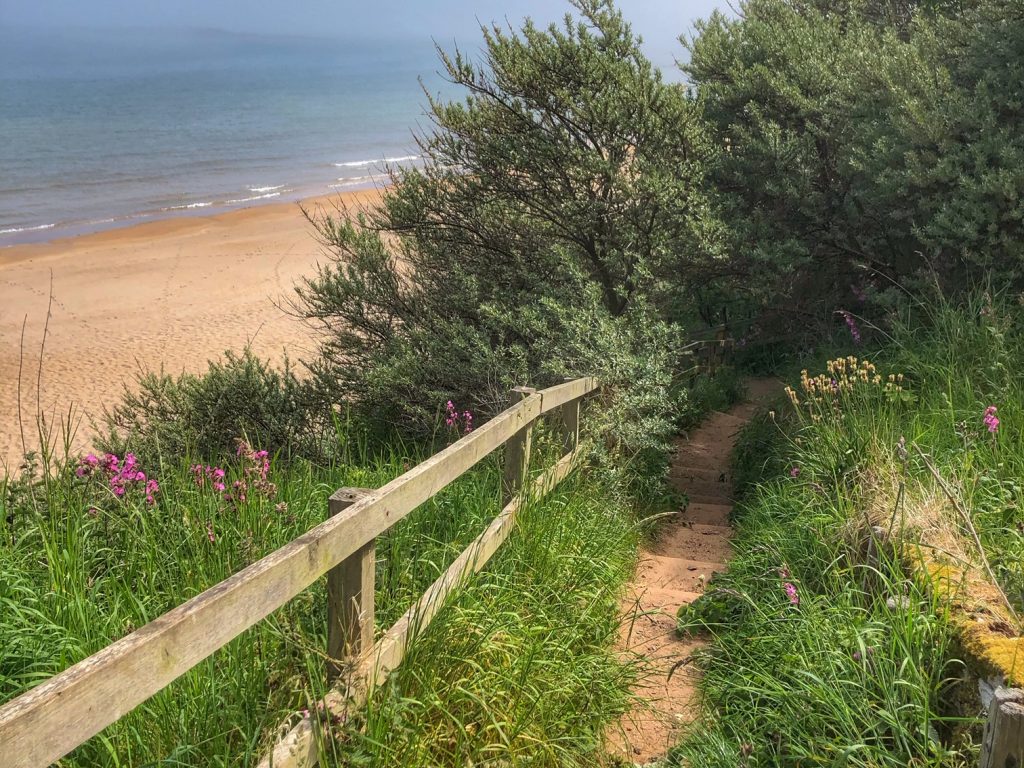 We squeezed past the barrier where you would normally pay your £3 for access to the beach car park and continued down to the beach. We found the beautiful sandy beach to be completely deserted and bathed in warm sunshine, while a fog still persisted over the sea, completely blocking out the view of Bass Rock, or even the lighthouse at the south end of the beach. 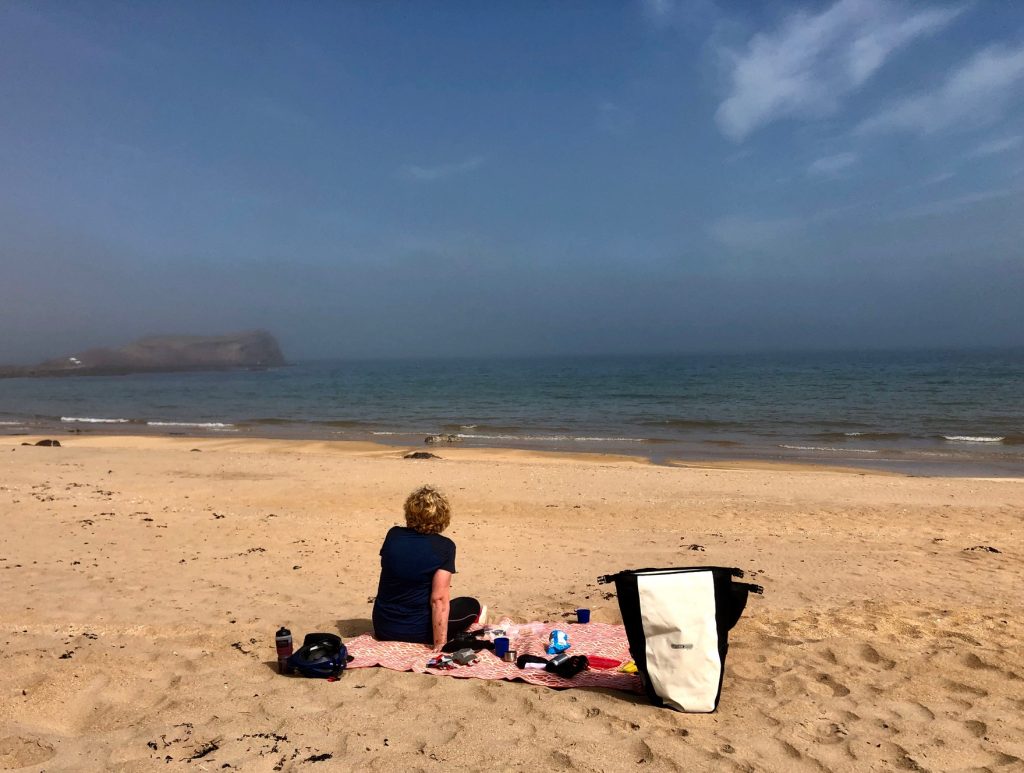 I set up our picnic blanket on the sand, along with our sandwiches, crisps, fruit and flask of coffee. It was a little early in the day, but who cares! It was time to relax and enjoy our supremely socially distanced beach outing. The only sign of any other people was a 4×4 parked at a jaunty angle next to the tiny harbour hewn into the rocks at the far end of the beach to our left.

A short while later, three policemen also noticed the car and we saw them in the distance going off to have a word with the owner. In the meantime, I lay down on the blanket, while Colette went walkabout along the beach, looking for things to photograph. She was hoping to find gannets diving into the water, but they weren’t anywhere to be seen. However there were terns and nesting fulmars to watch. 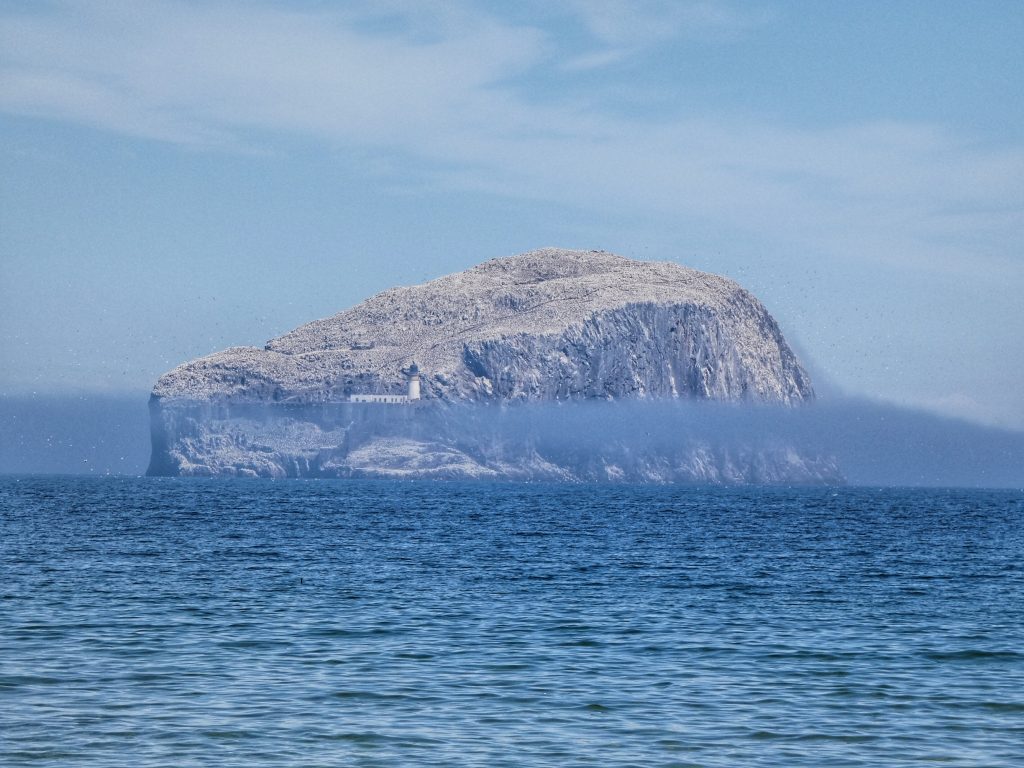 All this time, the haar was gradually lifting, so that Bass Rock and the lighthouse finally came into view. We stayed until the guano-covered rock was bright with sunshine, then it was time to pack up and leave.

Once back up the steps to the road where we left the bikes, I removed my shoes and socks to shake out the surprisingly large amount of sand that had worked its way in. We got the bikes ready to leave, but as we were just about to go, the three policemen appeared to check us out.

They asked where we’d cycled from. Colette said Longniddry, which they appeared to find reasonable. “Are you going any further?” asked one. “No, we’re heading back,” I replied. “Good”. I was glad we didn’t mention having driven to Longniddry!

Anyway, it seemed like a nice way to spend the day as a copper, and preferable to policing an overcrowded Portobello beach, which they did at the weekend. We said cheerio and headed off, round the one way system and back to the barricade, where we waved to the deeply tanned man in the chair, before turning left onto the main road.

A short couple of miles took us to Whitekirk, where we turned off the main road and headed southwest. A left turn took us steeply downhill and past Binning Wood. This was a poignant moment for Colette, as one of her friends had been laid to rest there the week before, but due to social distancing rules, she was not able to attend the funeral.

We then rode through East Linton, looking lovely in the sunshine, then turned right to go uphill out of town. I paused just beyond the left turn at the top of the climb to keep clear of traffic. Colette was ready to continue onto the big downhill on the other side before she spotted me at the turnoff, in a mixture of disappointment for having that opportunity snatched away, and also relief in not doing it then having to come all the way back up!

Through Markle and Athelstaneford, we apparently made good time, most likely due to the modest easterly breeze at our backs. I did have a slight problem at that point though, as I was having difficulty uncleating with my left foot. It just wouldn’t come out until I started toppling to the left and all my weight went down on my left foot. That was a bit concerning, so Colette went ahead at junctions, stopping to look and giving me the all clear so that I didn’t need to risk stopping myself.

We were nearly all the way back in Longniddry before it occurred to me that I could uncleat the right foot instead! It’s amazing how set in your ways you can become. Once we were back at the car, I extricated my left shoe for the last time and found, as I suspected, that one of the cleat bolts had fallen out.

With our picnic urge satisfied, we headed home. When we turned on the TV, we discovered that Nicola Sturgeon was not impressed by the number of people flouting the rules of Phase 1 at the weekend, in particular the 5 mile limit for travel to exercise. She was even considering putting it into law. That made me feel uneasy about our trip today. I am certain that what we did was not risky in any way, but I’m not happy going against specific rules. So car-assisted cycles are out for the meantime, and longer, further-ranging cycles starting from home are in…