Now we are on Phase 3 of lockdown lifting, it was high time that we did a proper away trip. I thought we should head up north and explore some more roads around Kinloch Rannoch. For that, I knocked up a route using Strava’s new updated route planner, seeing as I’m now paying for it in my Strava subscription. Some of the routing around Pitlochry seemed to use paths rather than roads, but I just had to trust that these would be cycleable.

So we set off bright and early with a fantastic weather forecast to look forward to. Arriving at House of Bruar about 8.15 am, we were too early to get a coffee at the shop, but Colette had planned ahead and packed a flask. We got set up, self caffeinated and departed in the direction of Calvine.

Being early, there was a bit of a chill in the air, so I wore arm warmers to begin with, and the road was still wet from yesterday’s rain. There wasn’t much risk of skidding on the wet road though, as they are built grippy up here.

After Calvine and Struan, we followed the road to Trinafour, which we have done a number of times before. The roads rapidly dried out in the morning sun and my arm warmers came off too. Six miles in, there was a hill waiting for us, but we were warmed up enough to take it in our stride. I stopped to wait for Colette at the first junction after the start of the hill, where the road to Tummel Bridge branches off left. I assumed that we would be taking the direct route to Kinloch Rannoch, which we have done previously, and was slightly disappointed that I hadn’t though to plan to take the other road, as last time we passed, I said that we really need to explore it. Well, as it turned out, Strava had created the route so that we actually took the left turn instead of the direct option and I never realised!

It was a lovely wee climb on a pretty decent road surface and didn’t actually take that long to complete. After that, it was a fast descent all the way down to the B846, where we turned right to head for Kinloch Rannoch. This part of the road had its undulations to slow us down, as well as fantastic views down to the white water of River Tummel on our left.

We reached Kinloch Rannoch shortly after 10am and kept our fingers crossed as we stopped at the cafe. Unfortunately it wasn’t open till 11am, so we were going to miss out on coffee unless we wanted to hang around for nearly an hour.

I remembered seeing a coffee machine in the mini market the last time we visited, so we headed there, donned face coverings and joined the queue to enter the store. Unfortunately, they had to shut down the self service coffee machine, as it posed a risk of Covid contamination apparently. So we made do with a bottle of water and a Lion bar for our morning break.

From Kinloch Rannoch, we headed southeast on the Schiehallion road. We hadn’t got far when I realised that Colette was no longer behind me. I stopped to see if there was a problem and then I understood… there was a big herd of red deer in the field to our right. Photo time for Colette, and also other passing motorists. 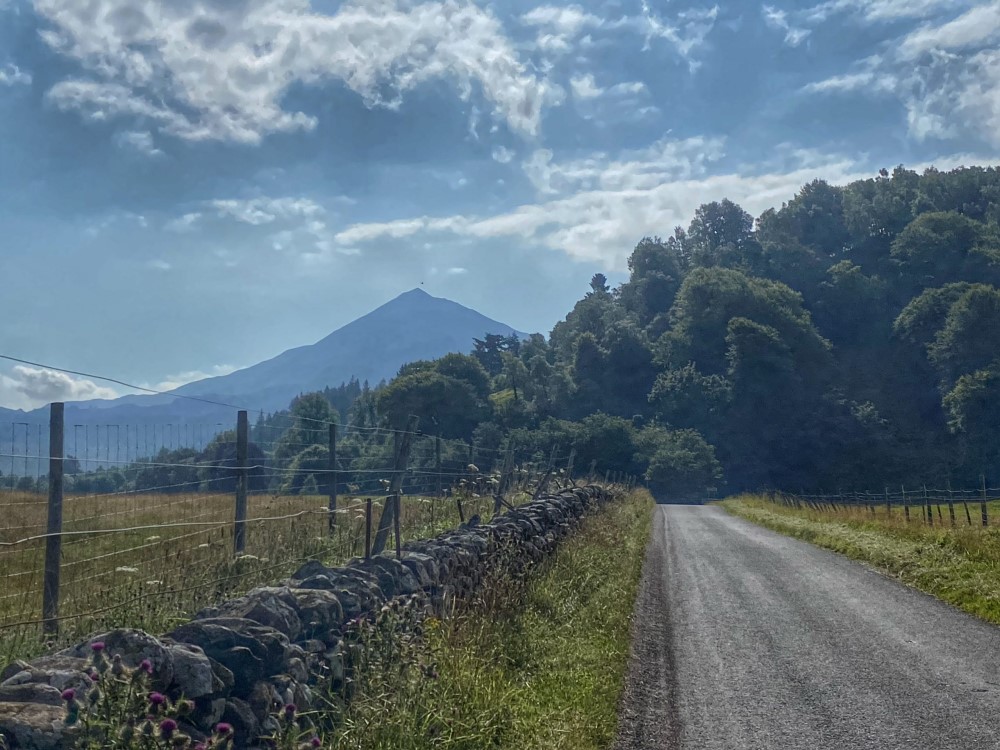 This stop also gave us our first glimpse of the triangular shape of Schiehallion mountain in the distance. Very soon, we were climbing; first through woodland, then open countryside. It was all very picturesque despite the sun occasionally being hidden behind high clouds. That might have been a blessing in disguise, as it was hot enough already to be climbing some steep gradients. 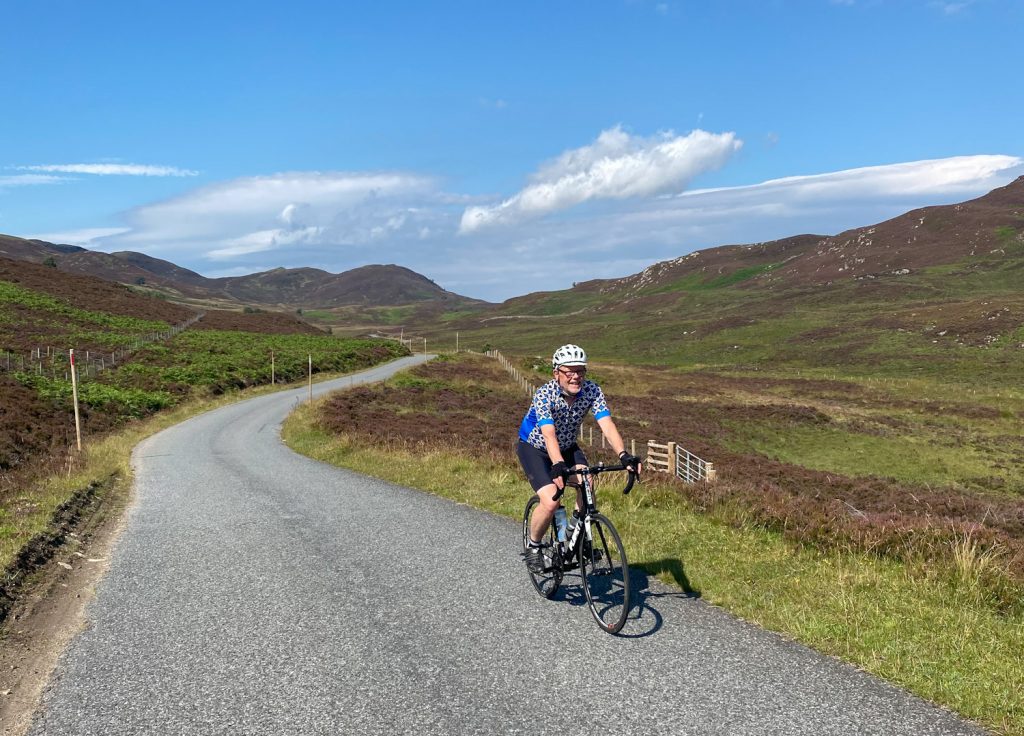 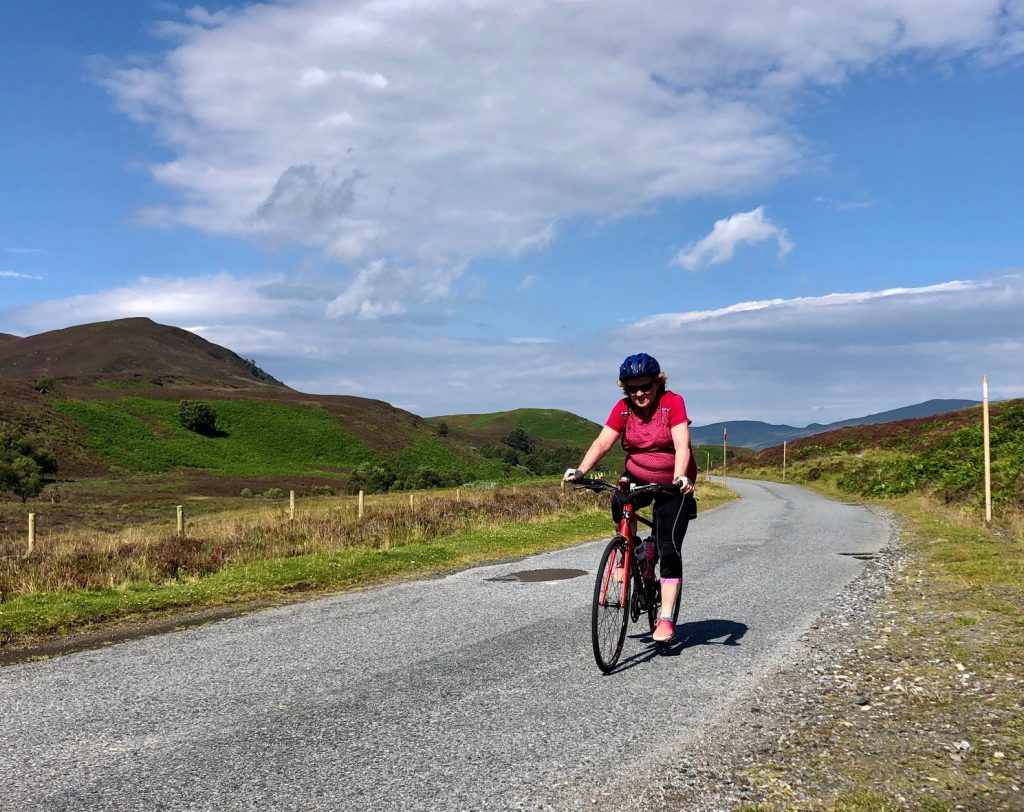 It was perfect highland cycling, with very little in the way of vehicular traffic to trouble us on the singletrack road. That was until we reached the Schiehallion car park, which was full to overflowing. Cars were trying to find places to park all along the verge, despite there being signs saying not to. 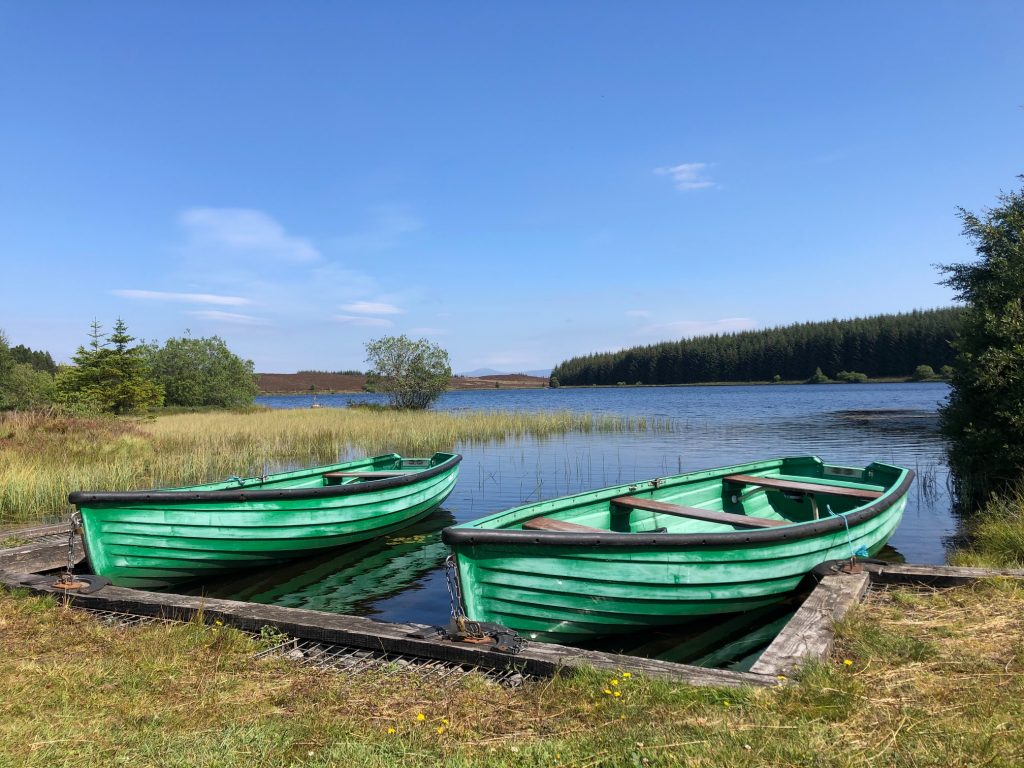 We left that behind and continued cycling till we had reached halfway through our route. That meant that we could now stop and have our picnic! We found the ideal place to stop at Loch Kinardochy. A short walk from the road took us to a shed belonging to the local angling club, with a couple of bright green fishing boats berthed alongside. We were out of the wind and the sun came back out in time for us to have a lovely restful lunch with a fantastic view across the water. It reminded us very much of our lunch stop last year on our cycle through Mull.

Soon after getting back on the road, we took a left turn and a short climb took us to the high point of the day (just under 1300 ft), before getting into another rip-roaring descent. I was enjoying it too much and missed the right turn to Foss. Luckily, my Wahoo started bleating at me to say I was off route and was able to turn around in time to prevent Colette from making the same mistake.

We continued a gentle descent to Foss and the south bank of Loch Tummel on a narrow singletrack road. I noticed a sign saying something to the effect of: “New gate across road – no parking beyond this point”. It did worry me slightly, but as it turned out, it was a complete fabrication, designed to persuade motorists to turn back. And by the time we’d reached the east end of the loch, we understood the motivation behind the sign…

There were cars parked on the grass verges all along the road next to every potential lochside wild camping spot. Families could be seen enjoying the fantastic weather, splashing in the water alongside their tents and BBQs. I’m fairly sure the locals weren’t enjoying the influx as much, and I’d be prepared to wager that there are far more lochside campers this year that any year before.

Soon, we came upon a tractor trying to cut the grass verges. It was having to leave large spaces uncut due to the cars parked there. We weren’t sure if we were going to be able to get past, but he pulled slightly to the left, leaving about 18 inches of road on the right. I decided to give it a go, but it wasn’t a very appealing prospect, as these were muddy inches of road, with a sharp drop from tarmac to grass at the side.

I got past the tractor and shouted thanks just as my rear wheel skidded on the mud, forcing me to correct, which took me right out in front of the tractor, almost under the front wheel. I was glad that I didn’t fall at that point, or else things could easily have ended badly! Colette had clearly seen this and was reluctant to follow. After a while, the tractor pulled a bit further over and she managed to get past as well. Phew! 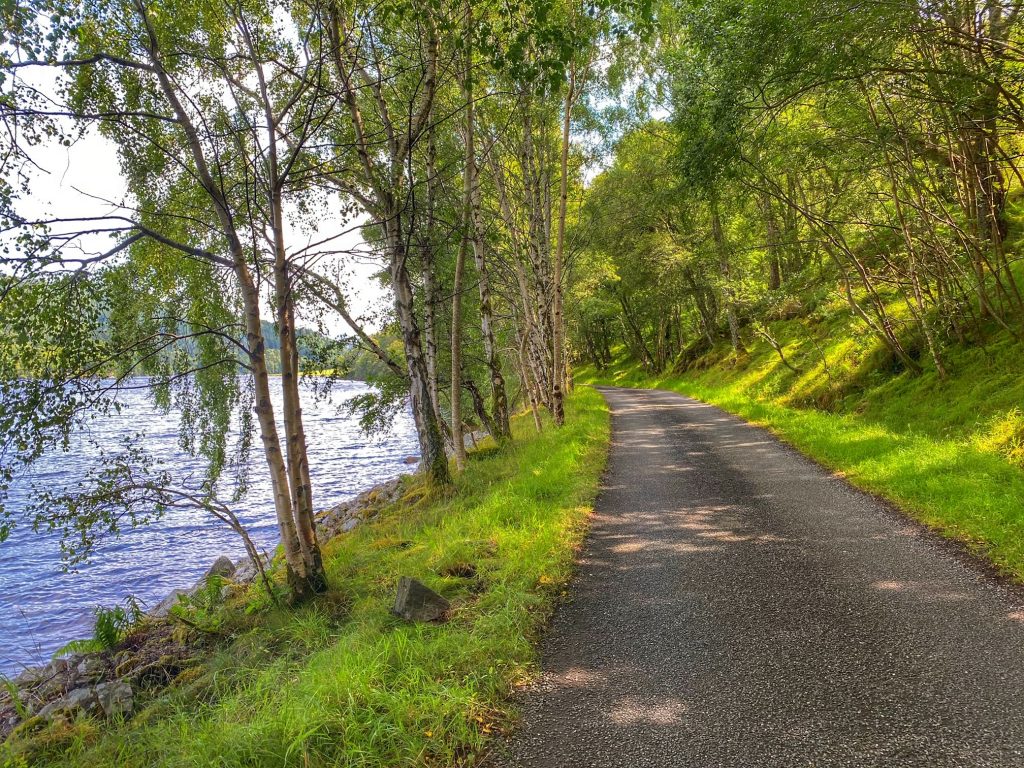 Not enough room to pitch a tent here!

The lochside road was pleasant enough, but we had to keep our eye out for oncoming cars, which seemed to arrive in small convoys of about three. Sometimes the third car wasn’t really paying attention, and didn’t notice you till the last minute. Colette commented that while there were lots of oncoming cars, there weren’t any wanting to overtake us. I wondered whether that grass cutting tractor was causing mayhem on the singletrack road, with all the potential passing places full of parked cars…? Accidentally on purpose…?? The locals strike back!!! 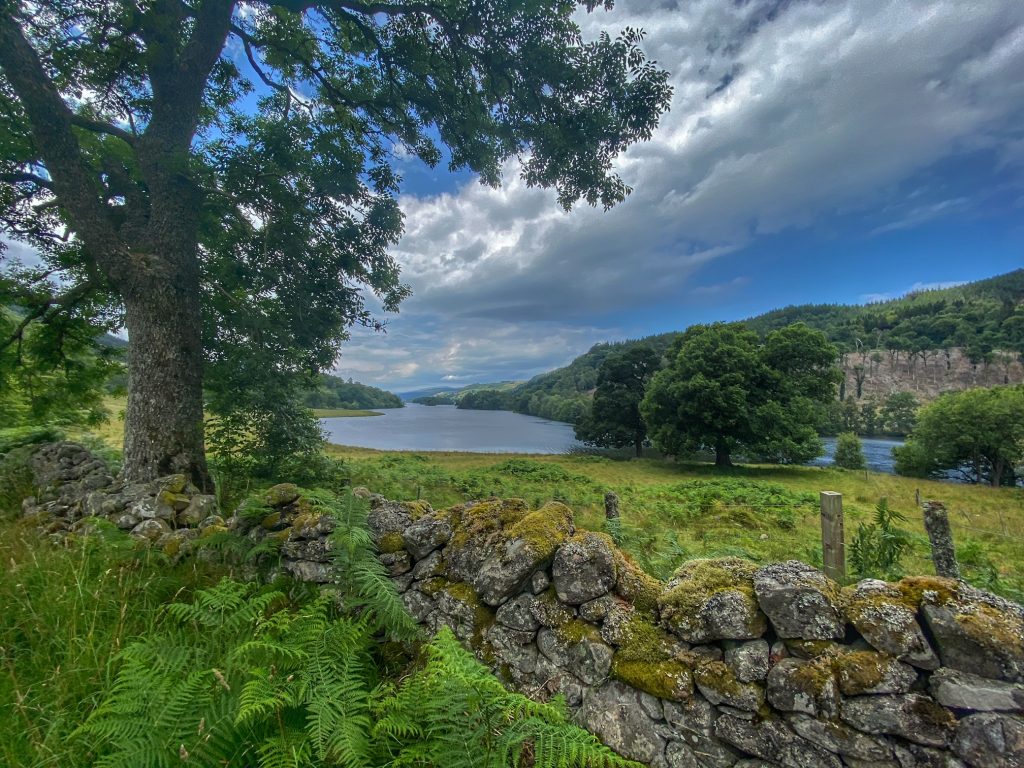 The road strayed away from the side of Loch Tummel, and suddenly there were no more parked cars. We stopped at a large monumental arch, which marked the entrance to the Clunie dam and power station. There was a large car park here, which was predictably empty!

Soon, we arrived at Clunie foot bridge, which runs over River Tummel, wide and slow at this point, and dwarfed by the big concrete bridge alongside, which carries the A9 across the river. Strava had routed us across this bridge and some tracks beyond, which turned out to be almost non-existent in places. 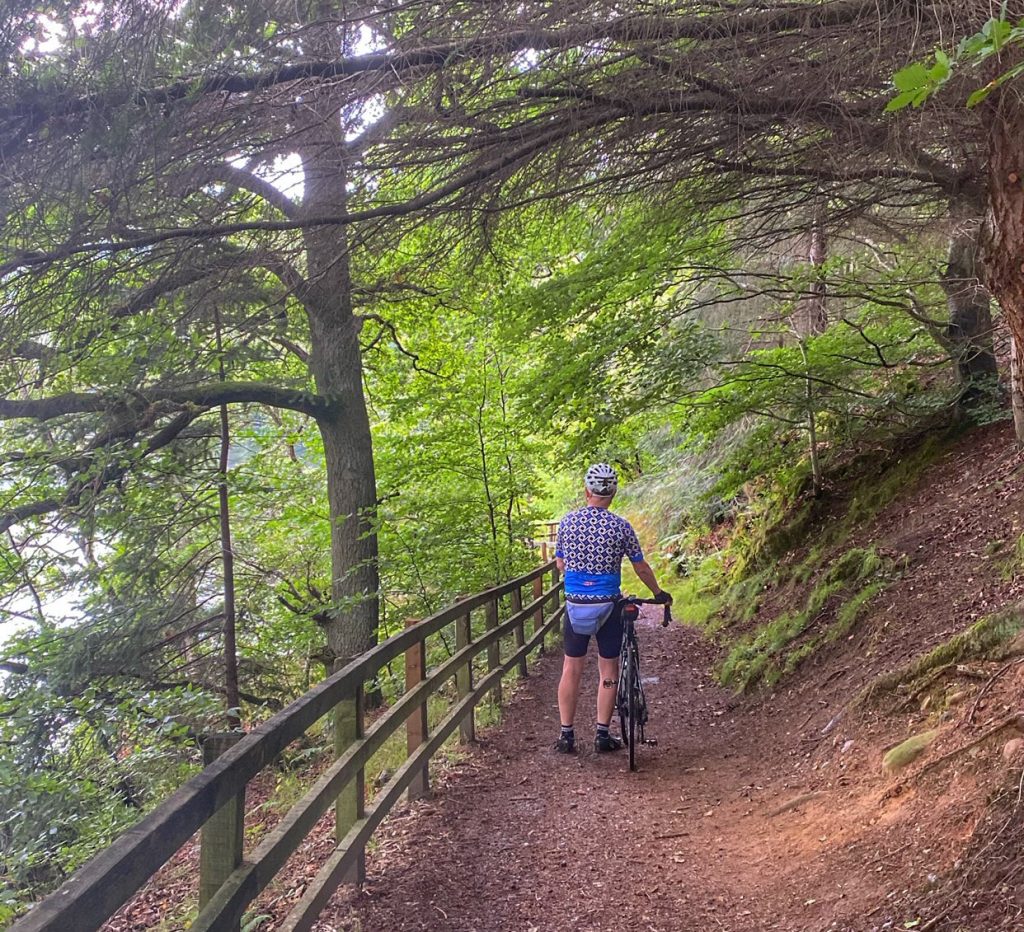 We carried our bikes over a wall and up steps, which we might have found annoying, but it gave a bit of variety and it didn’t last all that long before we made our way back to tarmac just to the north of Pitlochry. On the other hand, it has made me wary of trusting Strava routes in future. Maybe I can do something in the settings to exclude off-road paths…???

We cycled along the B8019 towards Killiecrankie, where Colette suggested we stop at the visitor centre, since we still hadn’t found a coffee stop. Unfortunately, despite initial high hopes due to the car park being quite busy, the visitor centre and shop, and importantly, the toilets, were all closed.

Ah well, Blair Atholl wasn’t far away. We stopped at the Spar there, and Colette went in search of ice cream. She emerged triumphant, and we promptly adjourned to a bench in the small park alongside for sedentary enjoyment of those pots of sweet delight. We’re easily pleased, us.

The final leg to Bruar was flat, then false flat, so it should have been easy apart from a slight problem with one of my bottle cages. The bolts had come loose and I didn’t have the correct sized Allen key, so I had to keep stopping and doing my best to tighten them up by hand.

When we arrived at House of Bruar, Colette went in for takeaway coffee while I wheeled both bikes back to the car, wondering why on earth I decided to leave the car at the far end of the car park. After packing everything away, Colette arrived carrying coffee that was far superior to anything we’ve had out of Bruar for years. Maybe they’ve upped their game, or maybe we were just so glad to find coffee at last, any coffee, even though it was right at the very end of the ride.