The point of this outing was to combine a visit to my Mum with a decent cycle, and also a flying visit to my Dad as well. Starting off from Cambusbarron at about 9.40am, the aim was to wend my way to Doune for noon, where I would meet Mum for lunch. It was a pleasant warmish day, with very little wind and occasional sunny intervals. Summer at last!

I got down Touch Road pretty quickly and turned left onto the A811 Dumbarton Road, finding it not particularly busy. The traffic all seemed to congregate about a couple of miles further on, just as I was trying to turn right. Safely away from the main road now, and over the River Forth, I was now on a long, flat, straight and fairly quiet road running across the Carse in the general direction of Doune. Such a flat road is a bit of a novelty to me, and I was surprised to see that I was doing over 18 mph with not a lot of effort.

At the end of the road, I had to turn left onto the A84 for a very short while, before going left again at the next junction. That took me onto the road to Thornhill, which although never very busy, has enough twists and turns for me to likely end up with a queue of cars behind, waiting to overtake. So I took a diversion onto a deserted minor road that runs back across the Carse towards Kippen. That was a very pleasant tootle through mostly flat farmland, with enough twists and turns to keep the scenery fresh.

Just a few miles from Kippen, I came alongside the meandering River Forth and found the right turn which would take me to Thornhill. I passed the Flanders Moss nature reserve on my left, which would be worth a visit sometime, but today was already planned out, so I carried on heading northwards. Thornhill soon appeared ahead of me, marking an end to the pan-flat flood plain. 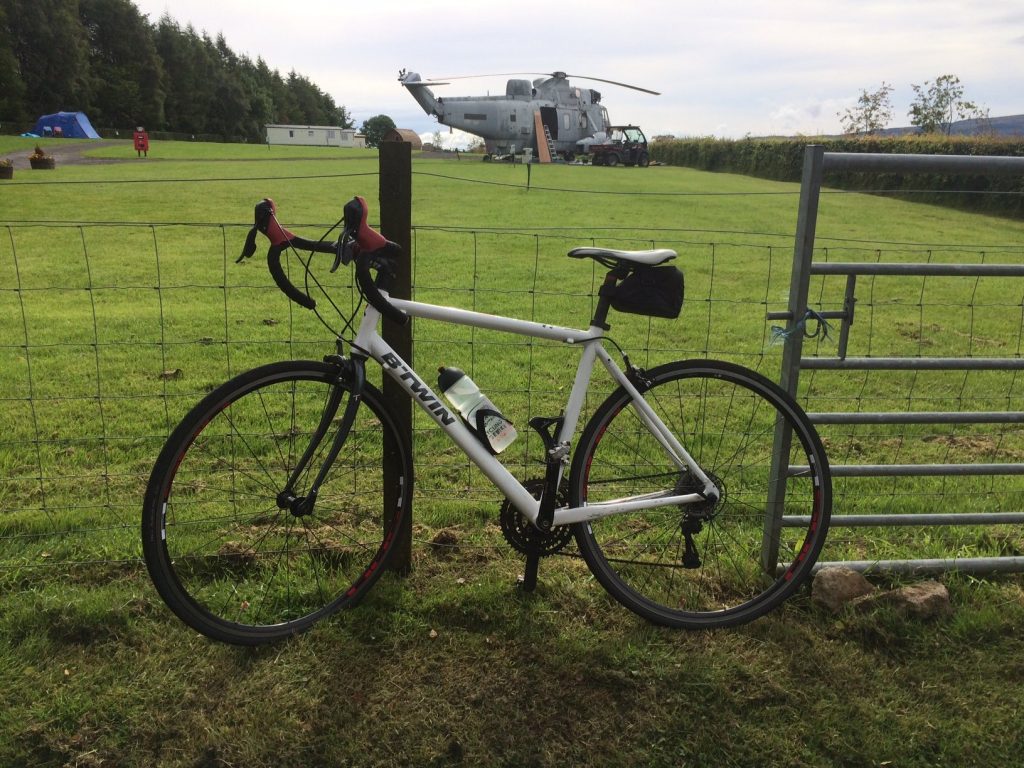 As I climbed gently up the hill into the village, I noticed what looked like a Sea King helicopter in a park to the right. I stopped for a closer look. There seemed to be people working on it, maybe making it safe for kids to play on. That would be great fun!

I carried on up into Thornhill, then out the other side and quickly turned right onto the road to Callander. For the next few miles, the road undulated quite markedly, with the general direction of travel being upwards. It would probably be more fun coming the other way. The fertile farmland gradually made way for rough pasture and moorland before the road began to descend again and I found myself rapidly approaching Callander.

I stopped beside the river close to the car park and had a bit of a break, as I was well ahead of schedule. It gave me a chance to look at the route, where I had planned to take advantage of a cycle route (no 765) running from Callander to Dunblane that I had spotted on my mapping app. This starts near the Dreadnought Hotel and runs through the residential area up the hill on the north side of Callander.

I didn’t see any cycle route signs though, so I had to stop at virtually every junction to double check I was going the right way. Thus, I ignored the “no through road” sign at the start of one road I was routed down. Fairly quickly, the road turned into a difficult gravel track, then became foot-wide grass track, which in no time was blocked by a high wooden fence which seemed to be enclosing a garden.

That didn’t seem to be right, but a quick glance at my MapOut showed that I was indeed in the right place. The map showed the path skirting round the obstacle, taking me along a barely discernable track onto a golf course. The golfers did seem slightly taken aback for a while, as I trundled my bike through the rough towards them. I then followed the virtual path, which was now not visible at all in real life, as it skirted along the edge of the fairway. I made a point of looking intently at my GPS with a puzzled expression on my face as I pushed the bike down the fairway, trying to convey the impression that it really wasn’t my own idea to come this way!

Thankfully it wasn’t long before a path away from the golf course appeared, bringing me back to tarmac. A little more map reading showed me the way onto a proper paved cycle path, which had me thinking it would be easy from here. However, the lack of cycle path signage meant that I was still stopping every minute or two to check the way, which was very time consuming. 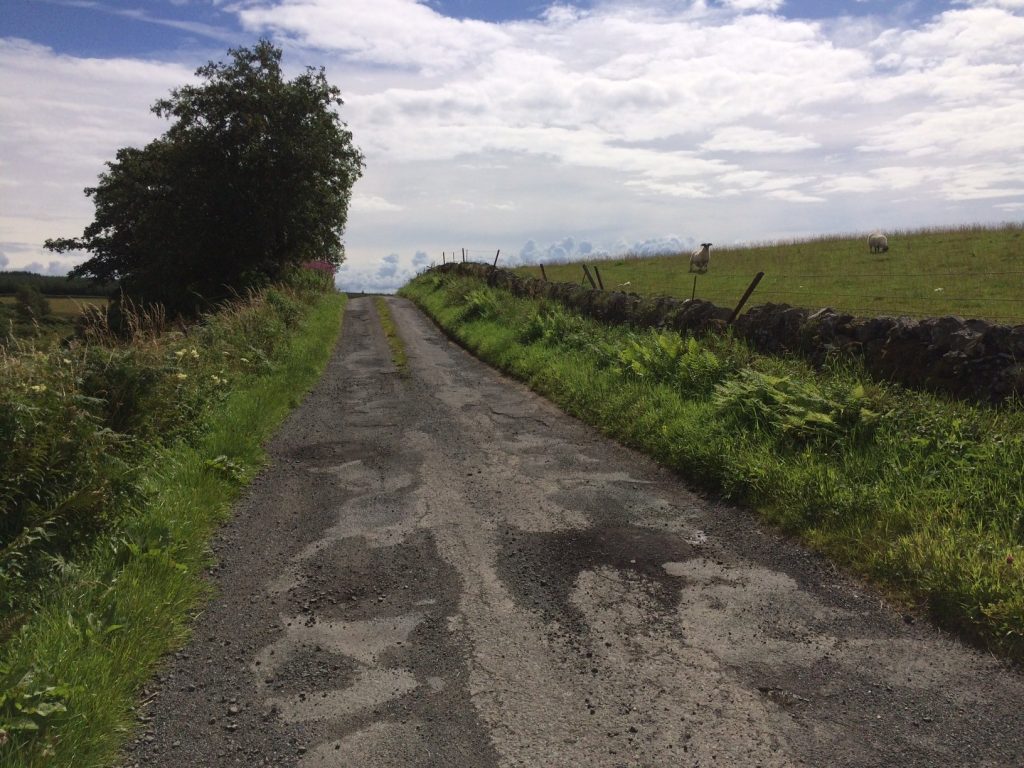 The quiet back road after Callander

After reaching Keltie Bridge, the route then took me onto proper road, albeit single track with some of the worst surface that I’ve ever seen on a public road. I will forgive it that though, as it took me into some beautiful and peaceful countryside. After passing the miniscule distillery at Drumbane, I didn’t see a soul. I felt myself deliberately going slow, as I was enjoying this road so much, and wasn’t looking forward to the next bit, when I reached the A84.

When I finally did arrive at the main road, I headed left and was soon riding through Buchany with a queue of cars behind me. Luckily it wasn’t long before I got to turn left when I arrived at the Scottish Antiques and Arts Centre. At the end of the driveway, I spotted my Mum getting out of her car, making our timing spot on. 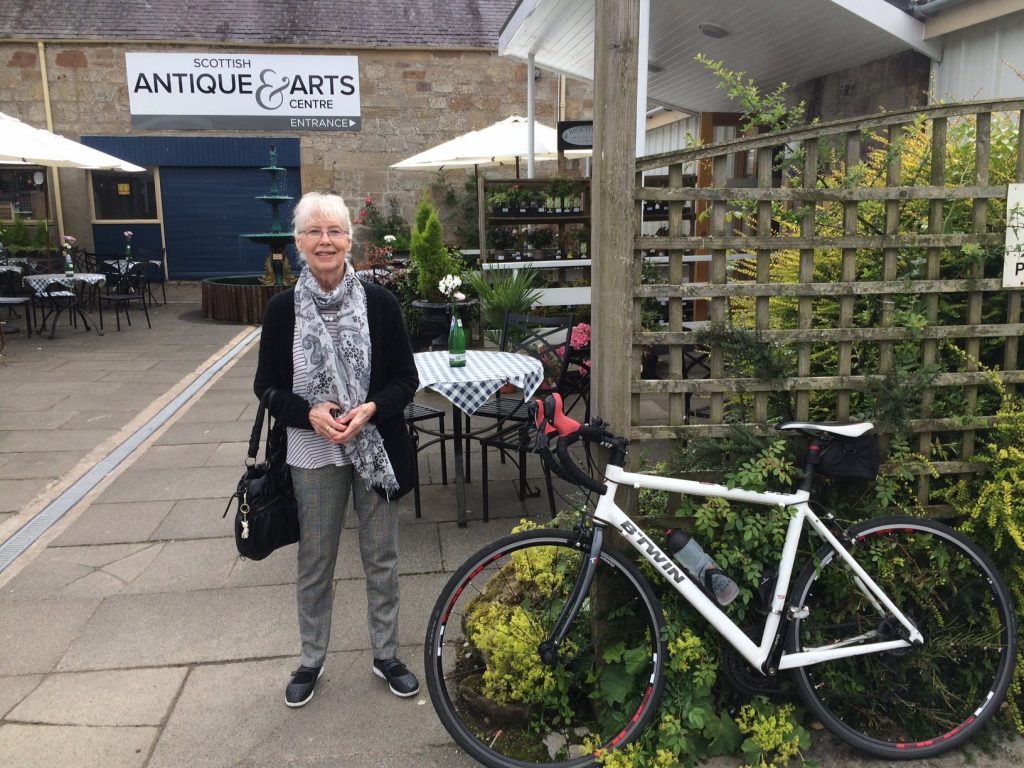 We went into the cafe and ordered lunch. The food was lovely and the service was amazingly quick. We were heading back out within 30 minutes and I didn’t feel rushed at all. That was good, as it gave me extra time to play with on the remainder of my cycle.

Returning to the A84, I had just a few more minutes of the busy road to endure before turning off into Doune town centre. There I found my first signpost for the fabled route 765. That took me left at the church, past a park, then onto a genuine cycle path on the bed of an old railway.

This easy ride (apart from the odd tree root) ran for a mile or so, till it ended when it reached a road, and sent me across that road and onto a path on the other side. This path was pretty overgrown but still paved underneath. However, that too ran out and it became a dirt track for a while. That’s fairly normal for Sustrans routes, I don’t know why I still expect them to be good quality, but I managed fine on my road bike and it didn’t get too dirty. 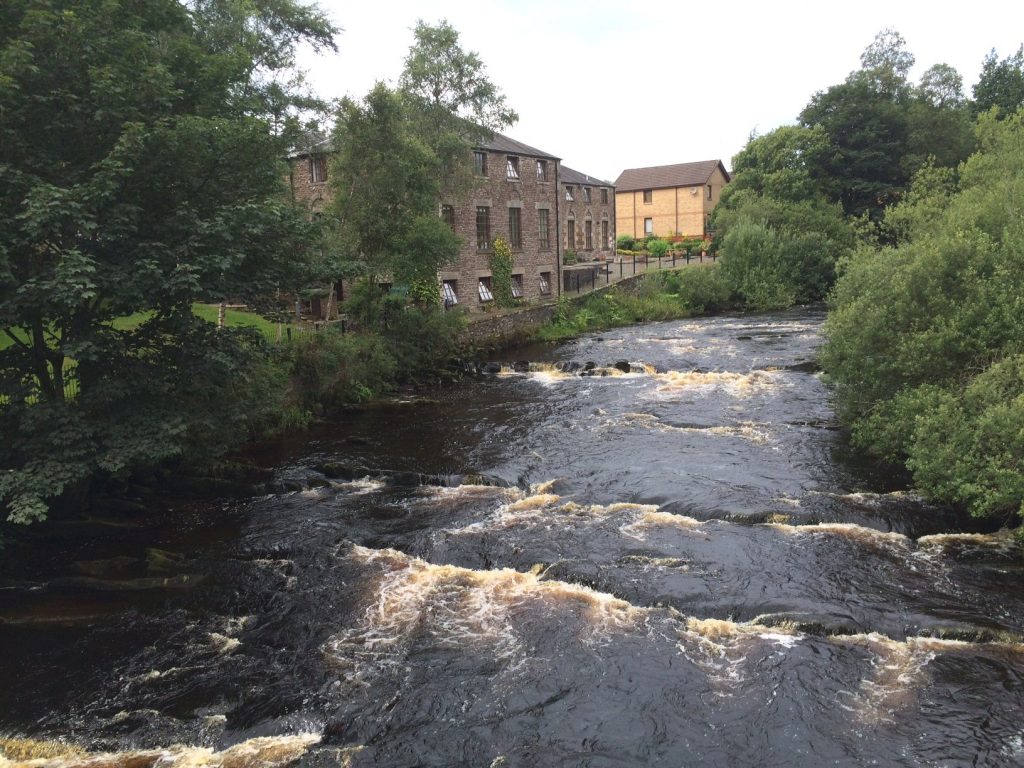 The Allan Water at Dunblane

Fairly soon, the path led to a bridge over the A9 and into Dunblane, next to the High School. From there, I trusted the signs to take me through the housing developments until I reached the river. A nice arched bridge took me across to the south end of the public park on the other side. At that point, I thought it would be fun to ride the path alongside the river as it headed downstream, only to find the path closed. There had been a flood a few years previously which caused part of the path to collapse. At least I could continue via the bridge to the park on the other side, and from there, came out at the station.

From there, I pushed my bike along the pavement to the High Street, where I stopped at my Dad’s house for a quick visit. After a cuppa and a chat, I headed up the High Street, past Andy Murray’s golden post box and up to the roundabout, where I picked up route 765 once more.

The cycle route goes quite steeply up Glen Road, which I had to start with zero momentum, as a dippy lady driver pulled out in front of me on the roundabout and forced me to stop. She looked straight through me, and I don’t think she saw me at all, as she had just caught sight of a couple of girls that were waiting at the side of the road for her to pick them up. Ah well, no harm done this time.

My attempt to climb Glen Road was clearly fated, as the next obstacle was a team of workmen renewing the road surface. This was no small job – they were doing the whole lot, so it will be a pleasure to cycle up next time. Luckily, I was able to push my bike past them on the pavement.

At the top of the climb, the cycle route carried forward on a section of old road that has been permanently closed to vehicular traffic. Not surprisingly, this is called “Old Glen Road”. The glen itself is a dense and very steep sided wood. I stopped to check out a waterfall which sounded quite significant, but it was obscured by foliage, so it really wasn’t worth attempting a photo. 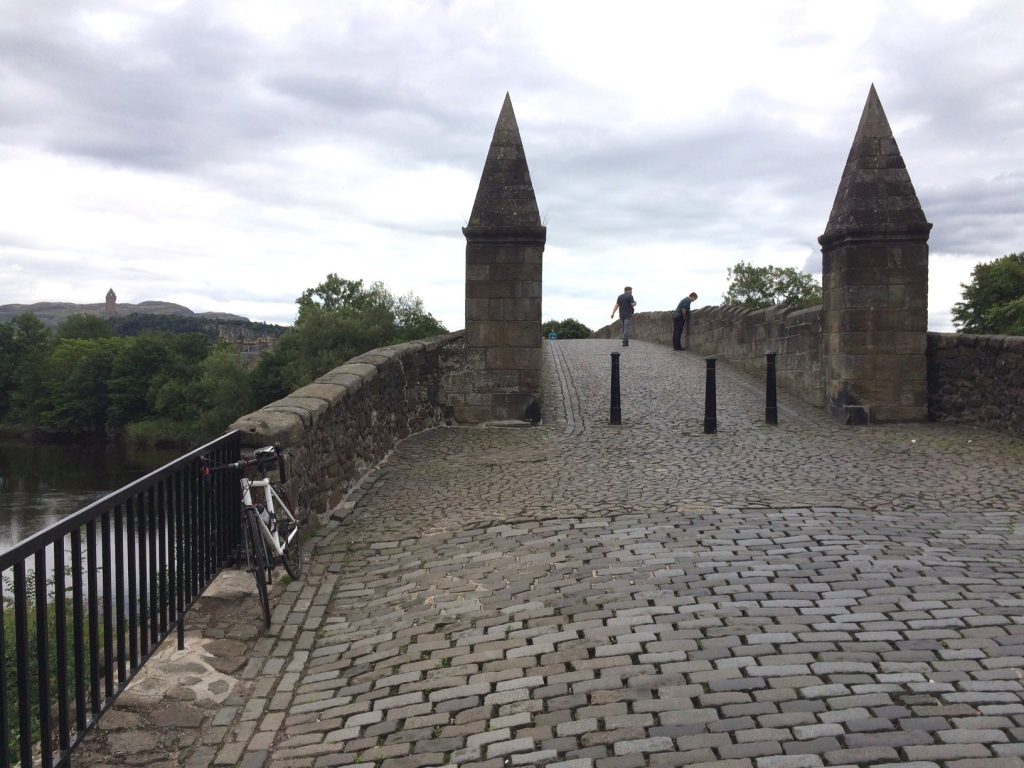 At the end of Old Glen Road, the route zig-zagged through housing till it came out at the west end of Bridge of Allan. There I turned left onto the main road, then right onto Fountain Road, which heads towards Stirling. This took me past the women’s prison and brought me back to the River Forth, where it’s crossed by the 500-year old Old Stirling Bridge. Cobbled, and strictly for pedestrians only, I think this is the first time I’ve been across it.

From this point, I took the Back O’ Hill road, keeping Stirling Castle to my left till I went right upon reaching King’s Park and continued back to my start point in Cambusbarron. Although I could have avoided it, I made a point of finishing by going up Quarry Road. This defeated me on many an occasion when I was a youngster, but modern gearing made it actually much easier than I expected. So a good end to a day with lots of variety.

Finally, I just needed to know more about that daft cycle route that sent me across a golf course. Well, it turns out that the stretch of route 765 between Callander and Doune is still in the planning stage, which is why there weren’t any signs. The aim is to get a cycle friendly route running all the way between Callander and Stirling, via Doune and Dunblane, which would be an amazing asset if it ever gets completed. Meantime, try not to annoy the golfers!