This ride was me getting back to my plan to cycle to the “four corners of Scotland”, two of which I ticked off last year. Initially I had envisaged doing it by way of several multi-day cycle tours, but recently it hasn’t been possible for me to swan off on such outings, leading me to come up with an alternative solution. That is to “join the dots” so to speak, and do some of the journey in bite-size day-trip chunks.

Today’s chunk was to be from Kinross to Bruar. The reason for starting at Kinross is that I have already cycled all the roads in-between home and Kinross, so I might as well start there and strike northwards. The reason for stopping at Bruar was that was going to coincide with Colette driving down from up-North, so she could pick me up there and take me and my bike back to Kinross, where my car would be waiting in the Park and Ride.

It all sounded good, but I have to admit having a bit of a restless night before worrying about my planned route through Perth, which I wasn’t convinced about, and I was also concerned about cycling through at rush hour. In the end, I got up early and was heading off by 7am into the morning traffic, but before the worst of it.

I reached Kinross at about 8am and got started out on a warm and sunny Wednesday morning. Heading out of Kinross, my worries finally changed to excitement as I looked forward to the day ahead.

Fairly soon, I came into Milnathort, busy with kids heading to school. I had to check my planned route on the MapOut app several times to convince myself that I was going the right way, before I got my eyes tuned into spotting the route 775 signs, which was my way to Perth. This route kept to quiet country roads, for which I was very grateful.

After about 6 miles, I reached the village of Glenfarg, where I had to brake suddenly three separate times for people and cars pulling out into the road in front of me. Strangely, I didn’t find it in the least annoying, I was in such a relaxed mood. The one thing that did alarm me somewhat was when I checked my iPhone and found it non-responsive. I had to do a reboot and was wondering when it stopped working. I would need to go back to that point and restart Strava. Luckily however, Strava seemed to have kept on working and I was simply able to resume from where I was. This is one time that I really NEED Strava to record my route.

The route after Glenfarg was hilly for a while, but at least the road surface was good, seemingly fairly recently replaced. When the climbing stopped, there followed a steep and sustained downhill section, taking my speed to well over 40 mph, even though I was being quite cautious.

Pretty soon, I came to Bridge of Earn, where route 775 ends, a few miles short of Perth. The route to Perth from here is along the A912, but it does have a pavement that is designated dual-use, so cyclists can use that if they would rather not cycle on a busy main road. I did the former, although the A912 was far from busy.

The pavement path took me uphill for a while, then it crossed the road to the other side and underneath the M90 interchange. After that it was downhill into Perth. Although there were no pedestrians, I felt a bit silly continuing to use the pavement, especially as I was headed downhill at a decent speed and besides, the road was unexpectedly quiet. So I hopped onto the road and soon after took a snap decision to turn right onto Friarton Road.

From looking at the map previously, I knew this road headed down to the river (Tay), so that would make navigation easy – just keep the river on my right! That took me through an industrial area before bringing me to the centre of Perth. It was all so much easier that I expected. After a couple of junctions, I turned right and found my way to North Inch park, where I picked up route 77. 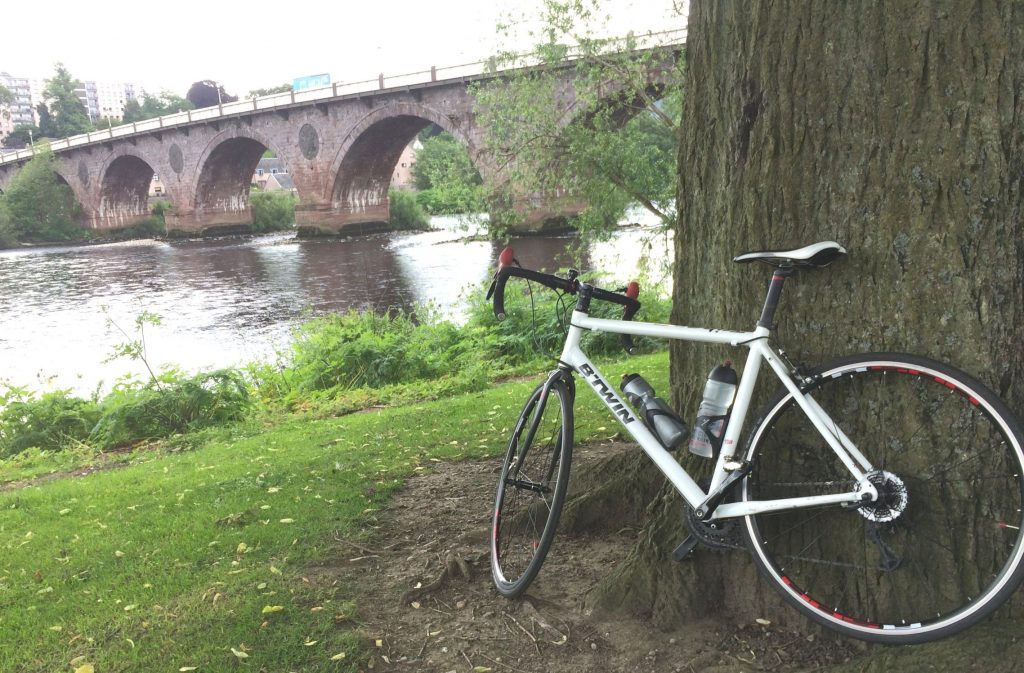 It was very pleasant cycling through the park along the banks of the Tay in the sun; dodging the odd doggie being preferable to dodging cars. The path turned west for a while, following a tributary of the Tay (River Almond) upstream on a fairly rough track, before crossing the river and delivering me back onto “normal” roads once more.

The following six miles or so of undulating road ran through rolling, green countryside, taking me to Bankfoot. The name suggested that there might be a hilly road ahead, but thankfully that wasn’t the case; it was more of a gradual increase in height over the next few miles till the route reached the A9. 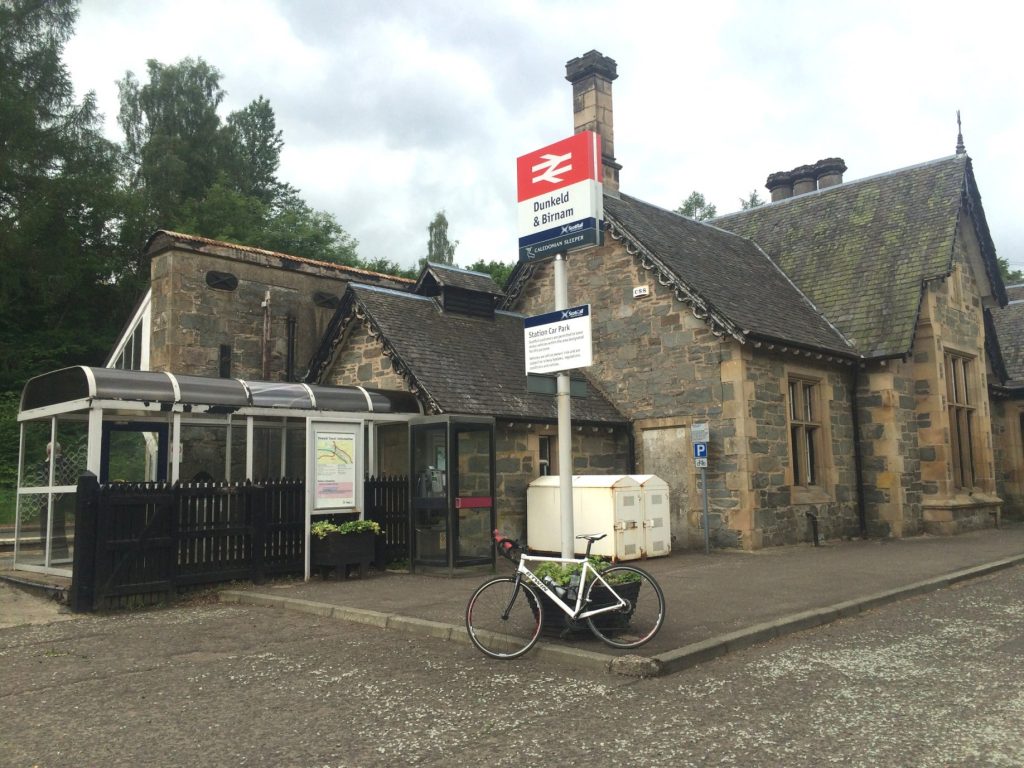 Just before the A9, the route went off-road again, going past the old-fashioned looking stationhouse at Dunkeld and Birnham station. It looks like most of the old building is unused, but at least still in good nick apparently, so it could hopefully be brought back into useful service sometime in the future.

From there, there were just a few more paths to negotiate before reaching the town of Dunkeld. I had planned to possibly stop there for lunch, but it was still quite early, so I pressed onwards through the town. At the far end, the route 77 signs pointed through some impressive-looking gates which lead to the posh Dunkeld House Hotel. I had to double check this was correct, before heading through. 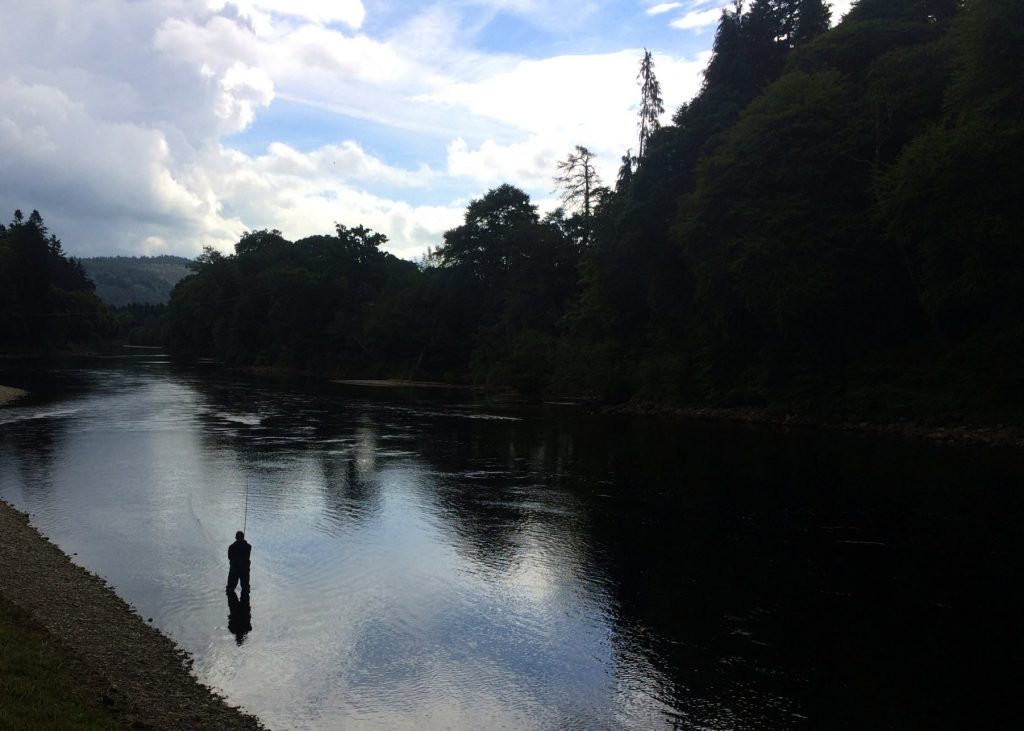 The hotel has a great location, overlooking some deep salmon pools on the Tay, with anglers hard at work heaving their long fly lines out into the river. I stopped for a moment to look before continuing along the path, which unfortunately for me, became a rough gravel and mud track to which my road bike was not well suited. About a mile later, the bone shaking ended when the path came out at the A9, where it contined along the pavement of a high bridge over the Tay. The cars were racing past, making it not very pleasant, but it wasn’t long before I was leaving the noise and fury behind and following a minor road northwards through forestry.

Around this time, the sky had become more cloudy, with the occasional light shower blowing past; luckily not lasting more than a few minutes at a time. The road was quite undulating, with sharp ups and downs, making it harder work to progress. I was beginning to feel like a rest, so a lunch stop at Pitlochry in a few miles was definitely in order.

I came to a wooden footbridge over the Tay at Logierait, where a sign said you cross at your own risk. There were also several workmen in orange overalls inspecting the bridge as I crossed, but it still looked pretty sturdy so I tried not to worry! At Logierait, I then crossed the A827, following the route 77 signs, then went steeply uphill for a while, till the road flattened off again after the cemetary. After that hard work, I had to stop for a little bite of energy to keep me going to lunchtime.

Another shower came and went before I got to Pitlochry and stopped at some benches near a monument on the main street (Atholl Road). The bench was wet, so I sat on my waterproof and got stuck into my sandwiches. I was about halfway through when the rain started again. It was only light rain, and it hardly bothered me – I was more interested in enjoying my lunch. After I finished, I popped over the road to the cafe to use their loo, and also bought a slice of rocky road, which I had as my 2nd course back on the bench in the drizzle.

By the time I was ready to get going after my brief lunch stop, the rain had stopped and the sun was shining again. The road was a little busy to start, but after I went past the exit to the A9, it went quiet again. My route took me towards Killiekrankie, approaching which I saw a sign next to the road heralding the start of the “Pass of Killiekrankie” and also a 14% gradient warning sign beside it. I thought “Oh no, this is going to be hard…” but after the first short rise, there was no more. Not that I was complaining! 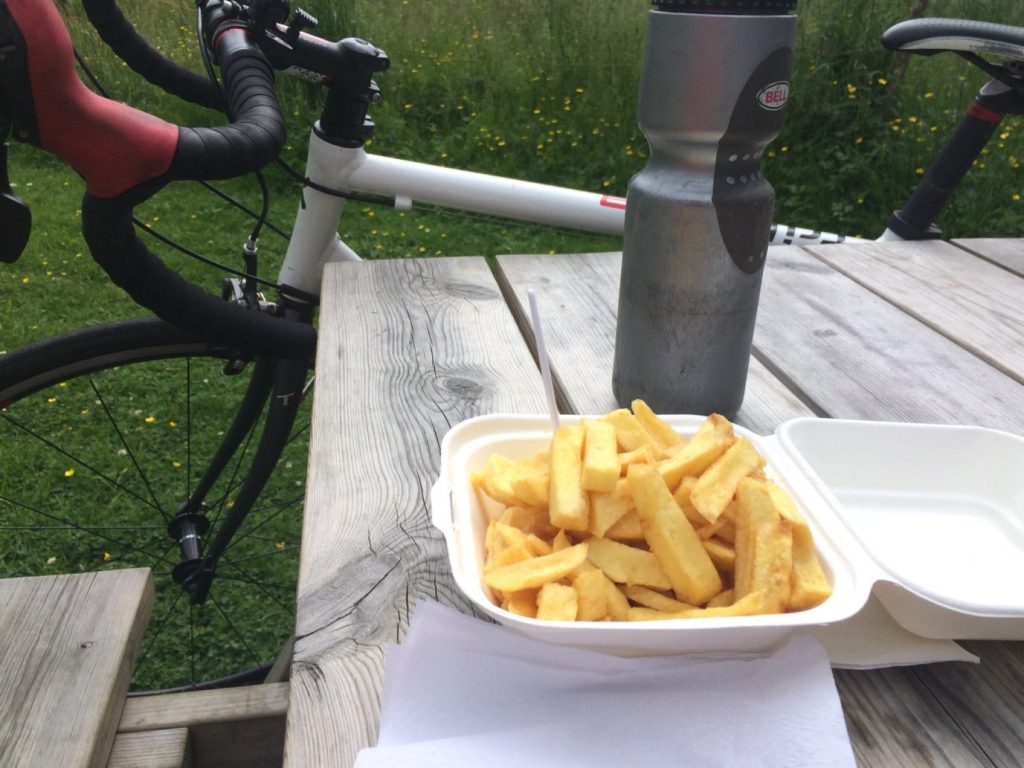 A few miles of mostly flattish road took me as far as Blair Atholl. I was ahead of schedule with some time to kill, so when I noticed an area with benches and a small shop next to it, I thought about relaxing with an ice cream in the sun for a while. The shop turned out to be a chip shop and didn’t sell ice creams, so I went for a portion of chips instead. With plenty of salt to replace my electrolytes, very nice they were too!

My final destination, Bruar, was only a short few miles away. I decided that I might as well get there early, and have a coffee while waiting for Colette to arrive. I did that, and as I sat on a bench outside the House of Bruar drinking my coffee, the rain paid me another brief visit. It wasn’t enough to get me soaking wet, but just enough to keep me cool. Nice. 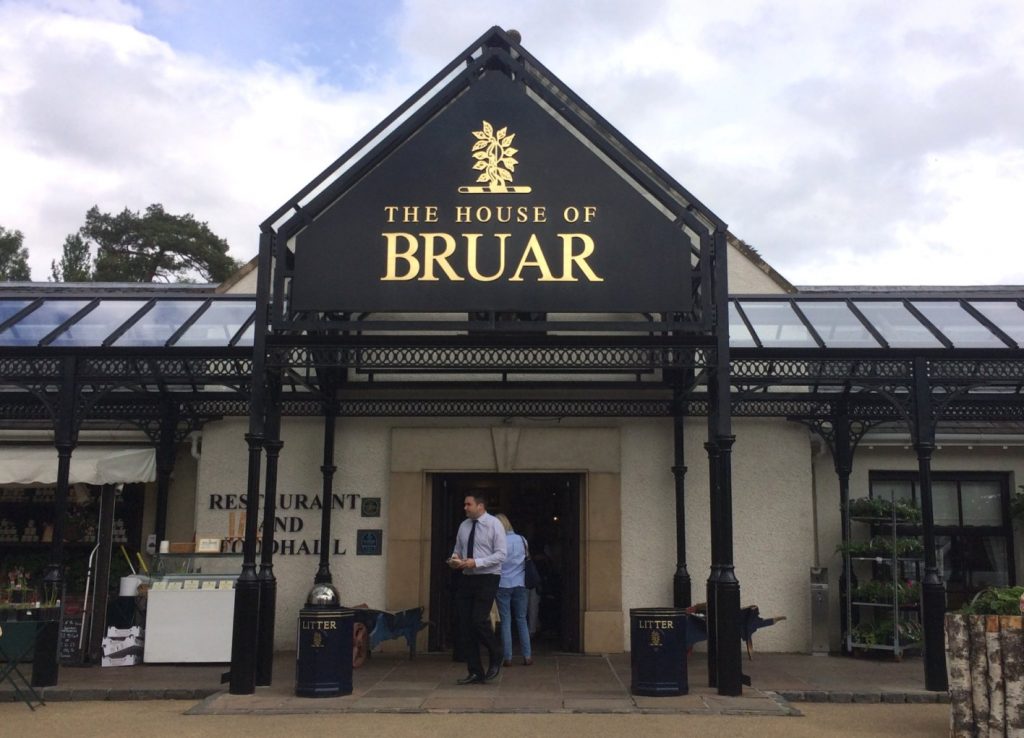 Then Colette arrived and the return home went as planned. Now to think about the next stage, which will take me along the most remote part of the road to Inverness. Sounds great – can’t wait!