Megget, Talla and Fruid – they sound like they could be the three witches from Macbeth, but actually they are three reservoirs in the Borders. There is no circular route that links up all three, so we decided to start at Megget and cycle to the end of Fruid, then reverse the route.

We parked at the viewpoint / car park just beyond Megget dam and got our bikes ready. A high pressure area had slipped over the country and we were going to make the most of it. The sky was clear and the sun shining, but there was a fairly stiff westerly breeze which we hadn’t anticipated. No matter, we set off into the wind and made our way sedately along the single track road. Pretty soon, we passed a house that had an unusual display of wellies in its front garden. Cue first photo stop of the day! 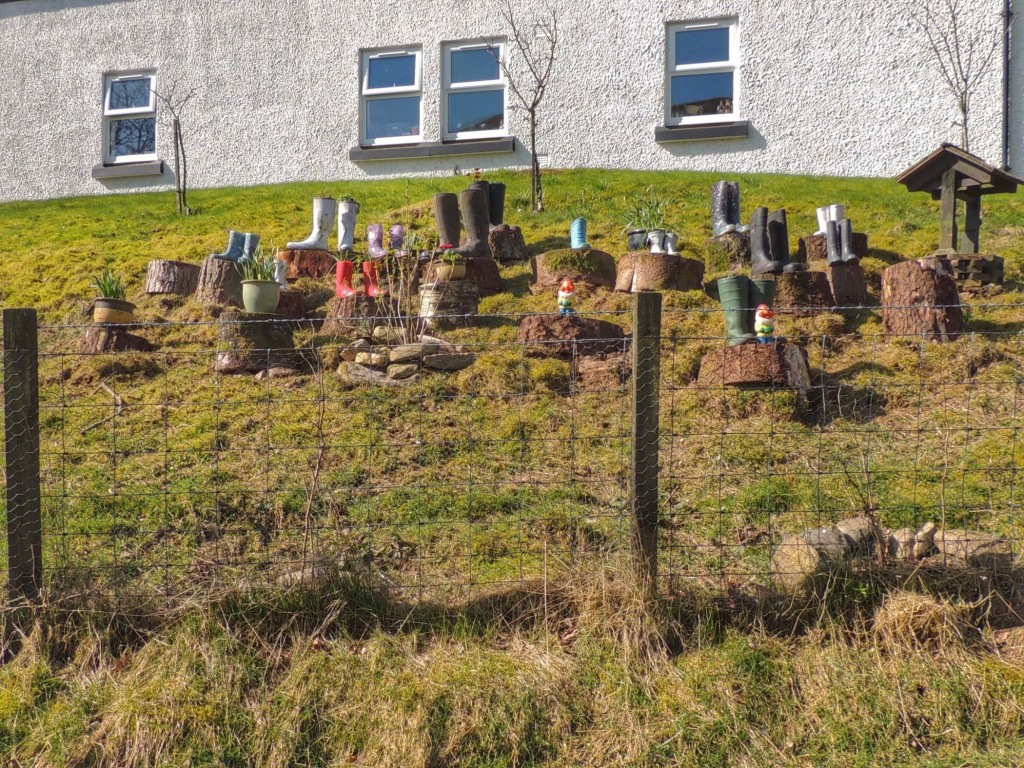 At the end of Megget reservoir, the road started climbing and winding through some very picturesque countryside. The slight gradient and headwind conspired to slow us to a crawl till we finally got to the top. We then started descending towards Talla reservoir but as soon as the next valley came into sight, we stopped in our tracks to admire the magnificent view. 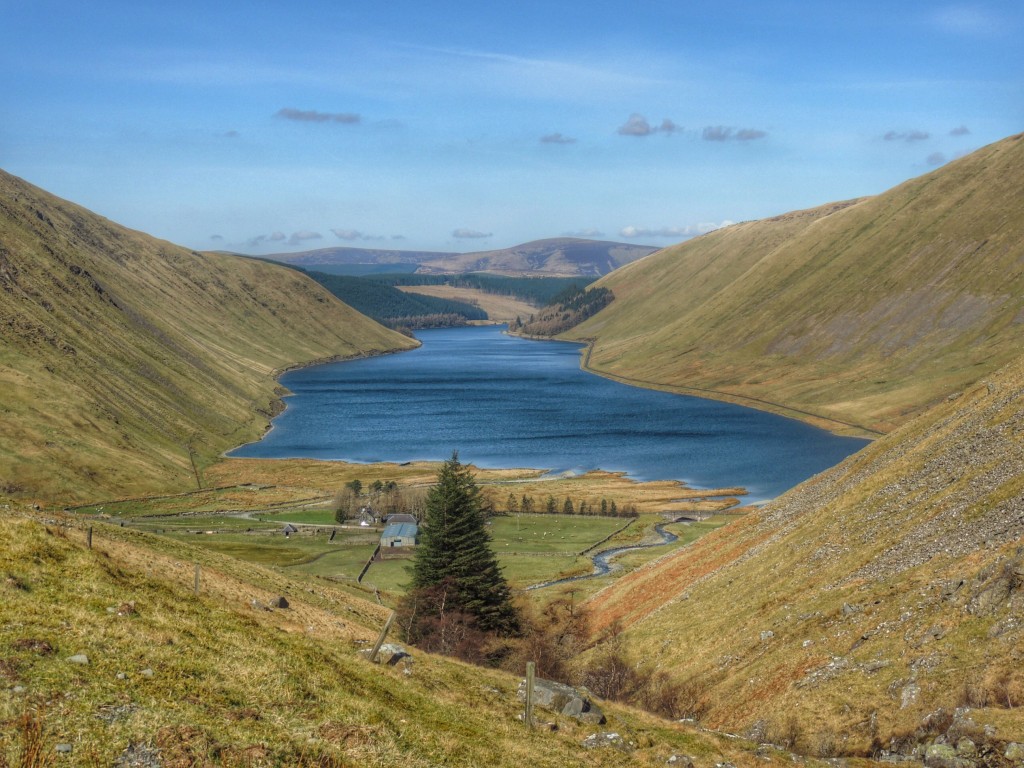 We then descended carefully – the road here had a 20% gradient, so much brake rubber was used in slowing us down to a manageable speed! We then passed the head of the loch and skirted along one side in the direction of the dam, on a flat, straight road. The hills towered above us on either side, their improbably steep grassy slopes dotted with grazing sheep. 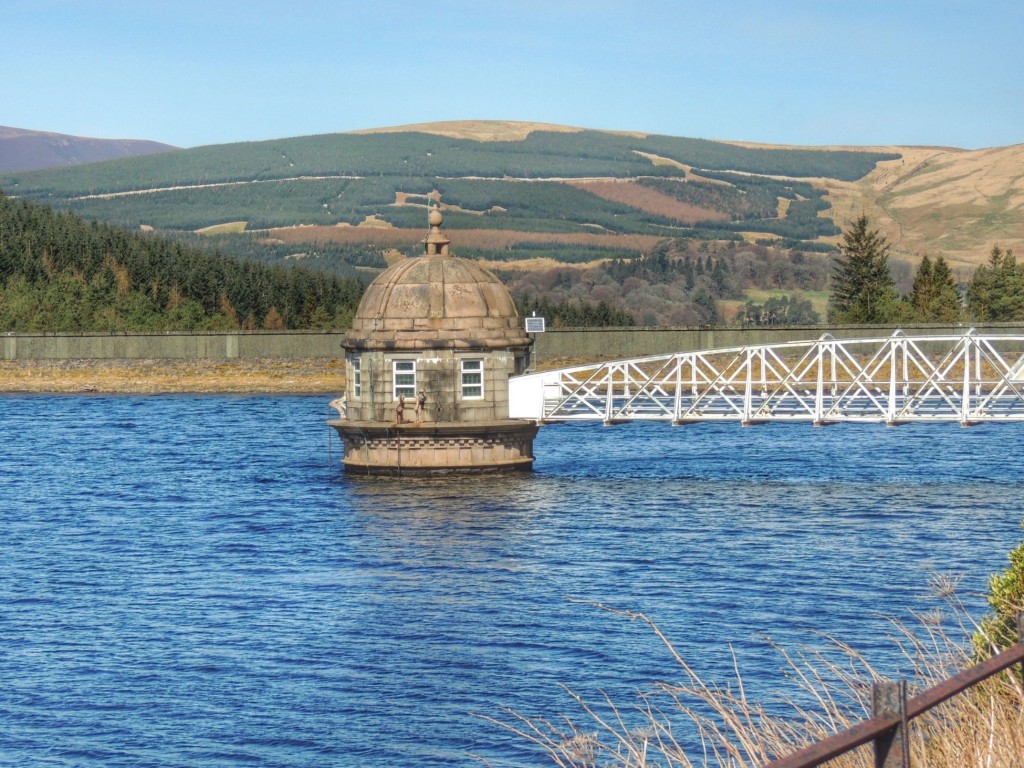 At the end of the reservoir, we came to the dam with a cute round building situated in the water just off-shore and a white painted cast iron walkway leading up to it. In all probability, it houses some stout metal winding gear for controlling the flow of water, but I’d like to imagine it occupied by some eccentric fellow who might invite us in for tea and share the view through the panoramic windows.

After a pause to admire a rather larger stately home for sale close to the dam, we headed downhill again and came to the small village of Tweedsmuir. There we turned left, following the sign for Fruid reservoir. The Fruid road went through some forestry and suffered from terrible potholes for a mile or so before returning to good quality again as we got closer to the reservoir. We approached the dam end first, so the road rose steeply for a short while before reaching a car park at the top of the dam. This reservoir was built in 1969, and the accompanying squat, utilitarian, concrete building was very much of that age. It does feel very out of place but I kind of like it, and the fact that it is taking on a natural weathered stone look.

From there, a road runs down the length of the reservoir to the other end. We followed it all the way, struggling a bit into the headwind, and found a farm at the far end. The road did appear to continue a bit beyond the farm, but the way it passed through the garden and looped round the back of the farmhouse made us decide that was far enough. We turned round and went back for a short while before stopping and breaking out the pincic on the grass at the side of the water. 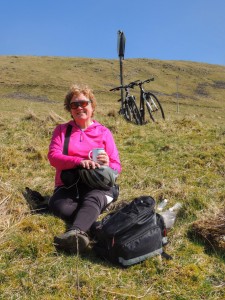 It was a lovely peaceful place to stop for lunch, hemmed in on all sides by grassy hills and not a sound to be heard, apart from the occasional bird. After eating, I lay back and warmed myself in the sun for a while.

When it was time to head back, we set off at a good pace, with the wind now at our backs. Back through Tweedsmuir and up to Talla, we started to encounter a few more cars, but they were still few and far between. Riding towards the head of Talla reservoir, the steep hill that we needed to climb was looming large. Finally, we reached it and resigned ourselves to a long grinding climb. It was definitely one of the hardest hills I’ve ever climbed, but somehow I managed to get back to the viewpoint without stalling, so I stopped there to admire the view once more, and more importantly have a good rest! After a while Colette caught up. I thought she might like a good breather too, but she was keen to finish off the climb, so we carried on and completed the final section. 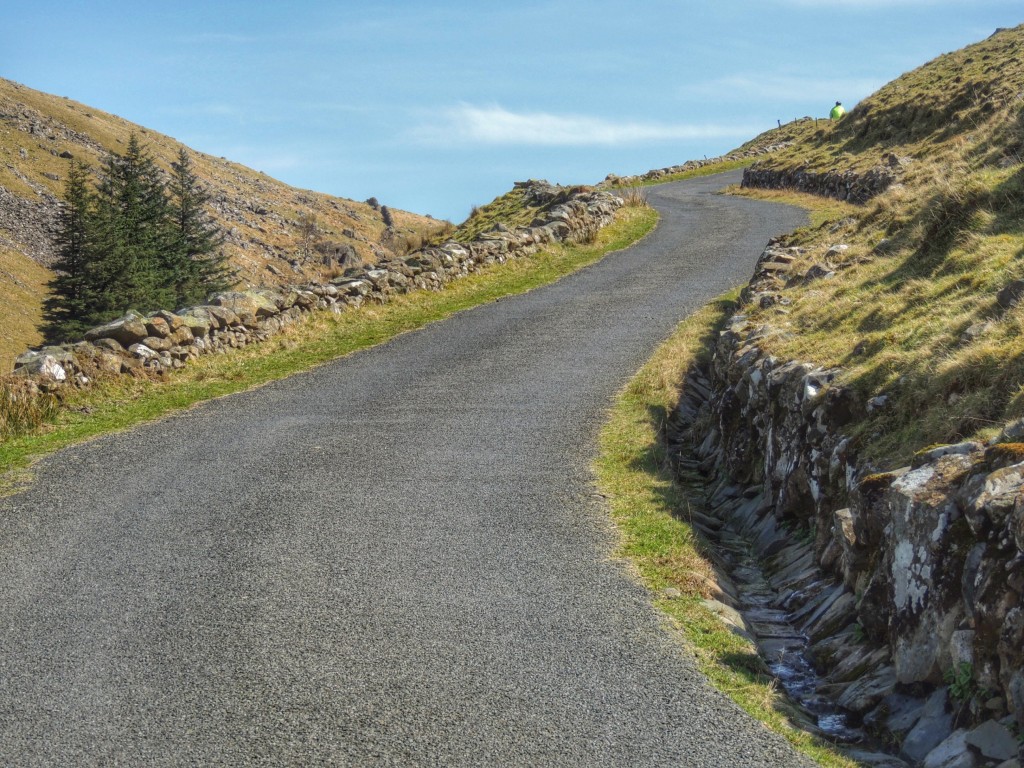 Climbing the “Wall of Talla”. Who’s that handsome yellow dot in the distance?

After that, we had a great freewheel down the other side, leaning left and right through the corners as the road zigg-zagged its way down the hill. We reached Megget again and rode along with a degree of wind assistance, although not as much as we had been expecting, and we suspected that the wind had changed direction somewhat unfairly. The sun however had kept shining throughout our trip and stayed clear of the impressive cirrus clouds that had appeared. Although we were beginning to tire when the car came into view after a total of 28 miles cycling, we felt we’d had a really great day out and were so lucky to have been there in such beautiful weather.