The second of the two outings that I’d organised for the Lothian Cyclists came round quickly, and I was looking anxiously at the weather forecast, wondering if we’d need to cancel. The latest forecast when we set out was for a cold easterly breeze, bringing overcast skies and light rain in the afternoon. Probably not too bad to call it off, but nothing like the brilliant blue skies we had last week.

We arrived at Ormiston Station car park for our departure, having got slightly confused en route by the sight of another group of cyclists massing in the centre of Ormiston. We weren’t the only ones to get confused, but luckily none of our number ended up going off with the wrong group.

Three of our group: Alison, Willie and Stewart cycled in from Edinburgh, so they were in for an extra long day – all of them in training for big cycling events later in the year.

So we set off under Puddle Bridge and along the Pencaitland Railway walk, heading roughly southeast. This route can be muddy at times, but it was quite manageable for the ones who came along with skinny tyres, despite some recent rain. At the end of the railway path, we turned right, climbing gently for a mile or so. The sun was just about breaking through the haze; enough to cast a weak shadow and warm us up a little, so several of us shed our outer layers.

Next, we headed steeply downhill into Keith Glen, then climbed sharply out of it, followed by a more gradual climb until we were almost at Humbie. The group predictably stretched out due to our varying climbing abilities, so we gathered together at the top of the hill before continuing.

Our route then took us along the undulating B6368 in the direction of Gifford, but we were taking the long way round, which involved turning right after Hattonhill farm. We then followed a winding route along the foothills of the Lammermuirs, although views of the hills were a bit hazy. 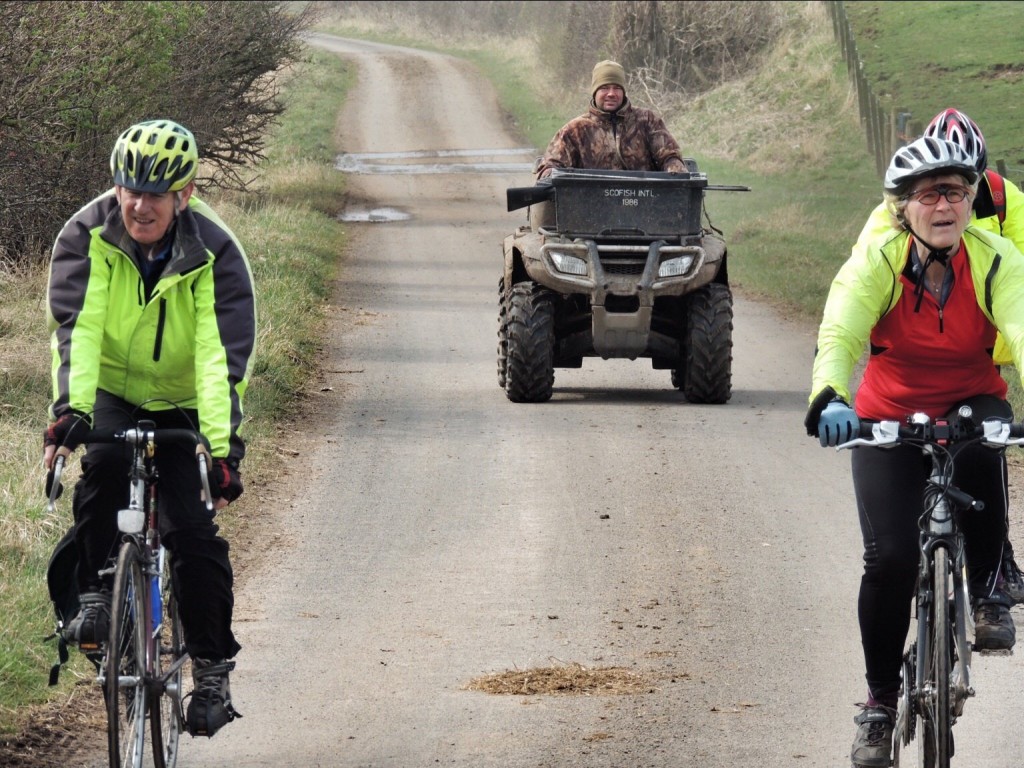 Make way… if you know what’s good for you!

We passed the multicoloured terraces of Long Newton and stopped when we reached Pishwanton Wood. Willie announced that he was going to take a “comfort break” behind one of the trees, till I pointed out the composting toilet that had been built there, by the Pishwanton Project. After he returned, Fiona said she was going to use it too, but as we were close to our cafe stop, I thought she might prefer to wait, since in my experience, sitting down on a composting toliet was “not as much fun as an ordinary toilet.” That choice of words had them all in stitches and it may take me some time to live it down! 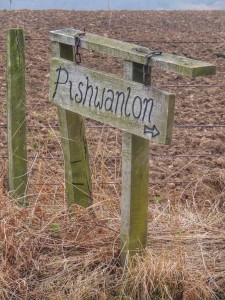 So we carried on our way, passing the low-domed, turf-roofed “hobbit house” on our way. As we looked in, we could see the inhabitants (hobbitses?) looking back at us, apparently having their lunch break. With that in mind, we made a move on and headed for Gifford ready for a good feed. 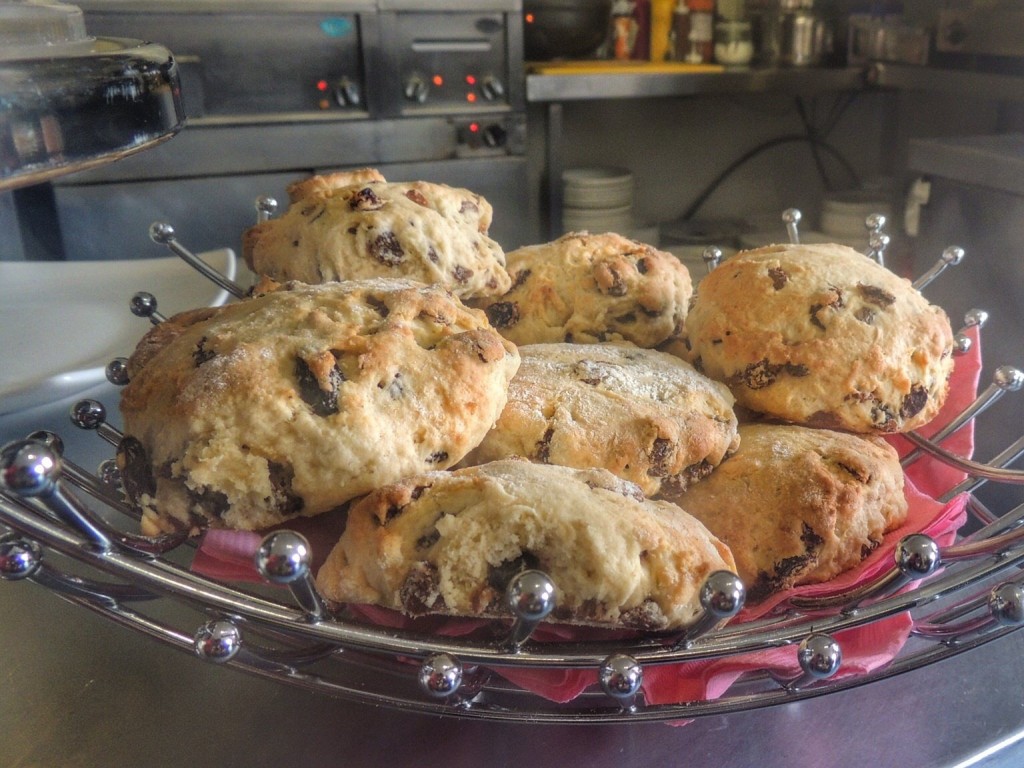 Arriving at the cafe “Love Coffee… and Food”, it looked quite busy already, but there were in fact plenty of tables and chairs to accommodate a sudden influx of cyclists. As I had given some advance warning of our arrival, Pam had put a quiche in the oven specially. We were a bit ahead of schedule, so the quiche wasn’t quite ready, but it was certainly worth the wait! Colette and Tony had eyed up the tempting bowl of fruit scones for afters, but there wasn’t any room left after the delicious quiche.

The Gifford Road Race had taken place just 2 days before, and Craig said the cafe was incredibly busy on that day. It sounds like quite a spectacle, with cyclists speeding and battling for position along the main road through Gifford. Worth coming back to see next year… 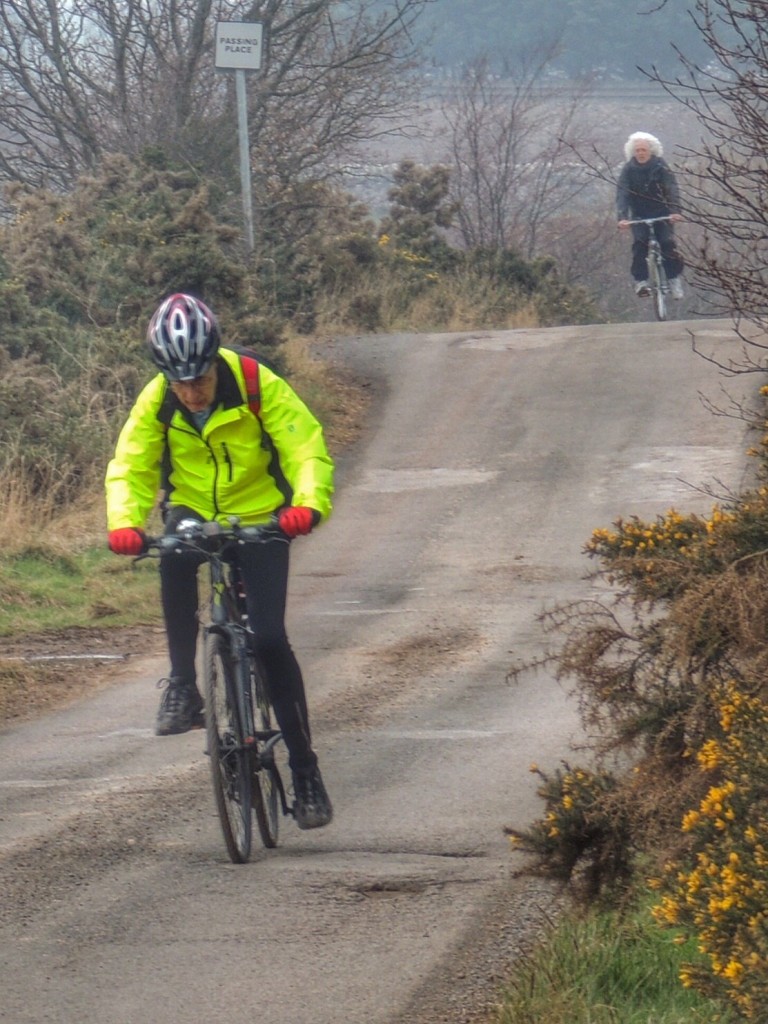 After our extended lunch break, we had a mile long climb ahead of us, which was tackled at quite a sedate pace for my part. After that, we were going predominantly downhill for quite a long time. We paused at a junction at a place called Morham Loanhead, where Tony B made a graceful but unplanned dismount from his bike, rolling onto the grass verge. He was not this first of us to do this, and probably won’t be the last! Fiona missed it, but Tony couldn’t be persuaded to put on a repeat performance. 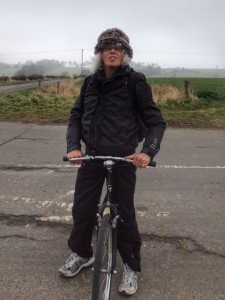 Who needs a helmet when you can have one of these!

By the time we reached the next junction, it was starting to get chillier and more overcast again. The jackets went back on, and Tony M’s furry helmet made an appearance. We then turned onto some very flat roads and made good speed with the east wind at our backs.

We made our way onto the B6355, which took us along the eastern edge of Pencaitland, then skirted the substantial grounds of Winton House. At the north gates to the house, we stopped and collected together again, then turned left onto a narrow road, which became a dirt track, and took us back to Puddle Bridge. There we said our goodbyes and set off home after a very pleasant amble through the East Lothian countryside. As for the promised rain, it started just as soon as we drove off out of Ormiston.