Whenever a pro cycling race comes nearby, we like to go and cheer them on. This year, the Tour of Britain came to the Scottish Borders, starting and finishing in Kelso, so we came up with a plan… I originally hoped to see the race start, then ride out to a vantage point to intercept the race part way through, then ride back to Kelso to catch the finish. All with a sit-down lunch stop in the middle. After trying and failing to come up with a schedule that accommodated all those stipulations, I had finally to acknowledge that it was not really feasible. So it was decided that we should start in Kelso, but get going early and miss the start.

Normally, I like to park in the wee riverside car park near the Klondike garden centre, but the traffic ground to a halt as we closed in on it. So we turned around and parked on the outskirts of town. Lynne and Keith came too, and once we had got our bikes ready, we headed into Kelso.

I had hoped to pick up my chosen route out of town, but some of the roads were closed and barriered off, so we had to push our bikes slowly along the narrow pavement. It was still an hour before the race was due to start but it was already quite busy. We walked past the start/finish point and finally found a crossing place, where we could get away from the race circus and get riding properly.

We headed northwest out of Kelso with the walls of Floors Castle estate on our left, then took the first left onto quiet side-roads. The sun was out but there was still a chill in the air, so I tried to ride out of the shade as much as possible. 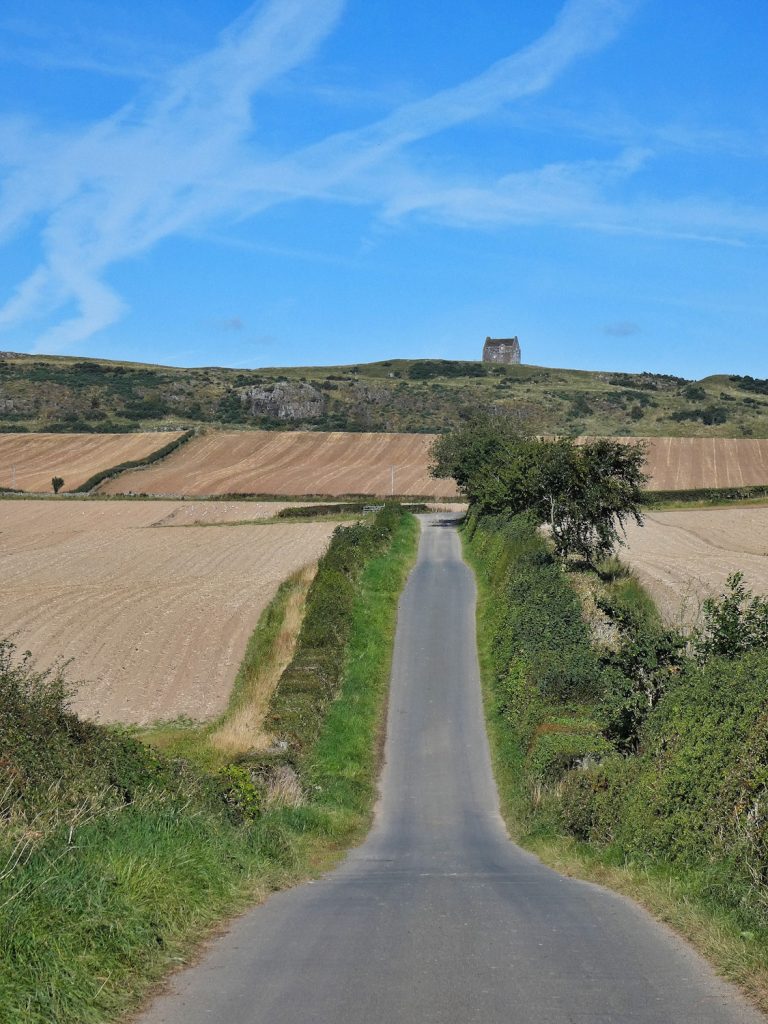 Our route to Melrose was basically a reverse of the Four Abbeys route at this point, so the roads were familiar. One of the plus points of doing it this way round was that we got a great view of Smailholm Tower. What’s more, having taken the pressure off by not trying to see the race thrice, we could enjoy the ride and the views at a nice leisurely pace.

There were a few small ups and downs as we approached Newtown St. Boswells, passing by Dryborough Abbey and then crossing the Tweed, spying a variety of wildlife along the way. We then skirted Eildon Hill North, involving more of a focussed climb before descending into Melrose and starting to look for lunch.

It was a quarter to twelve, and the Ship Inn wasn’t open yet, so we had a wee look round alternative options. The Townhouse Hotel was advertising a soup and sandwich combo, so we enquired and they were ready to serve us a slightly early lunch. We all enjoyed our meal, and since we were making good time, we were able to have a leisurely coffee afterwards.

Next, we headed out of Melrose, past the Trimontium Roman encampment and over the Tweed once more, close to the iconic Leaderfoot Viaduct. After that, we were faced with a stiff climb towards Brotherstone.

I had originally hoped to see the race go past at the village of Smailholm, which is at the top of a rise which would slow the riders down. You get longer to look when they are going slowly. However, if we were to wait there, we would be stuck on a closed road and unable to make a quick exit back to Kelso after they passed. The alternative was to wait at a crossroads just before Smailholm, which gave us a quick exit route.

We must have got there about 15-20 minutes before the riders were due to pass. A few other people were already waiting, and we found a good vantage point on the wide grass verge.

Also waiting on the verge was a sad looking bumblebee, sitting on a piece of discarded cardboard, and barely able to move. The poor thing was all out of energy, but we knew we could help. You’ve got to help bees: they’re having a hard time of it lately by all accounts. Colette chewed up a sweet and put some of her sugary spit down next to the bee. Luckily it wasn’t a fussy bee, so it started feeding and pretty soon it was buzzing with energy again. 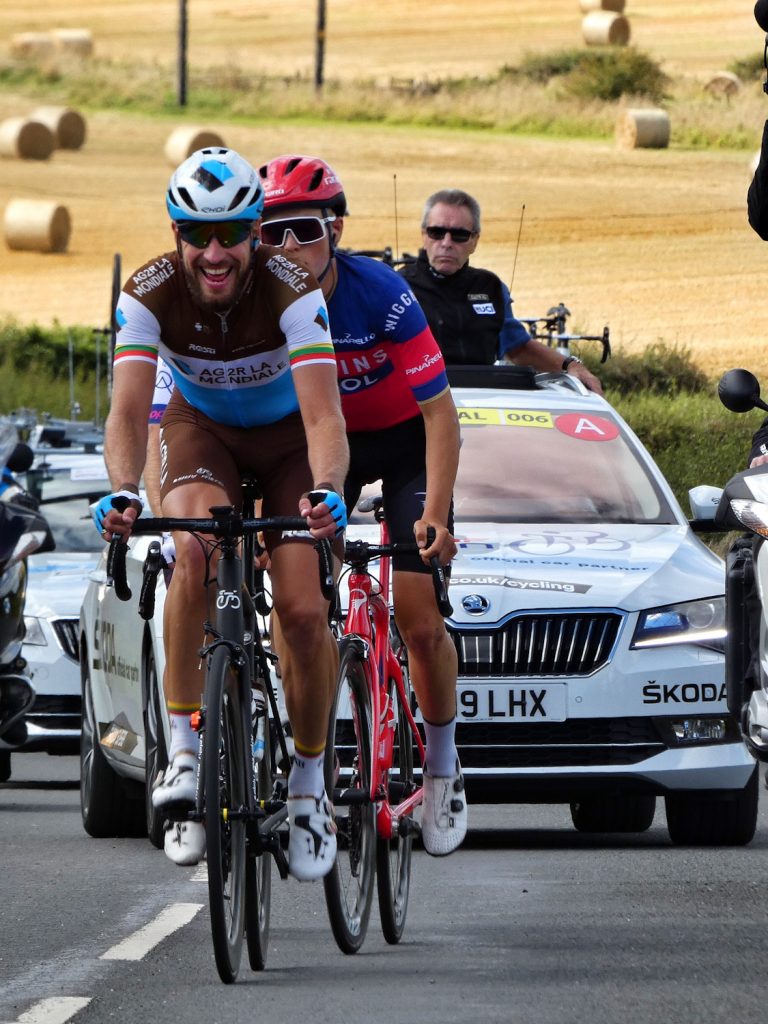 This apoidean interlude kept us busy until we could hear the altogether louder buzzing of a small helicopter, signalling the arrival of the Tour of Britain. After numerous motorbike outriders, the breakaway group of three cyclists came into view.  In front was AG2R La Mondial rider, Gediminas Badgonas, who was smiling over at us as we cheered the riders on. 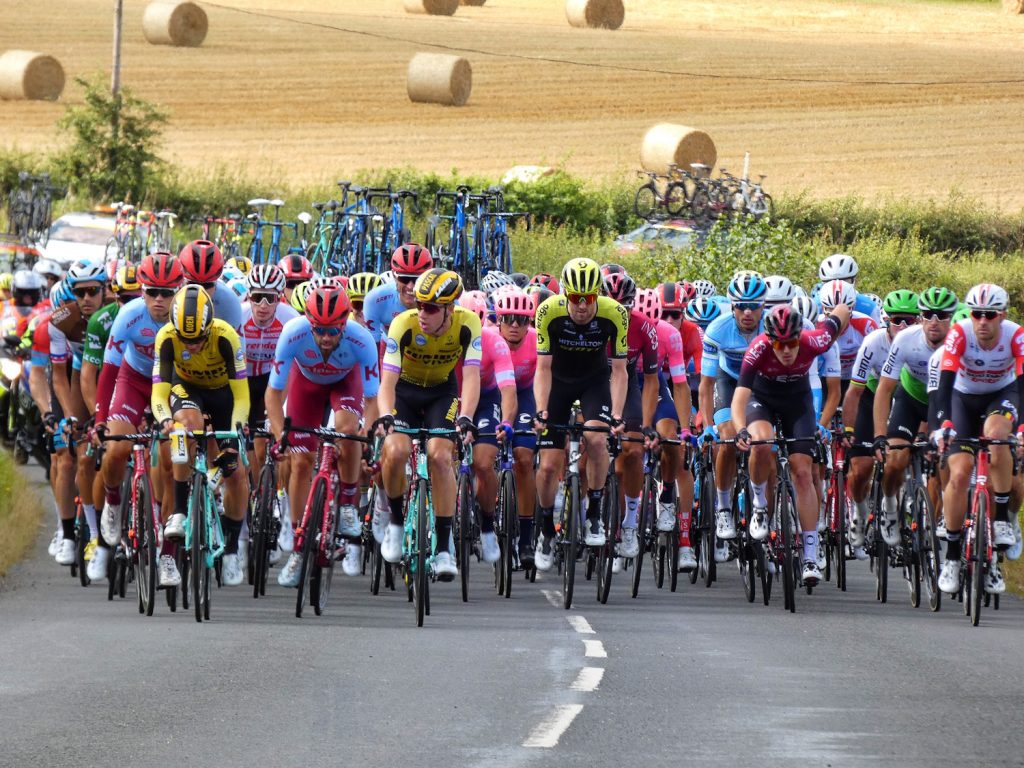 Less than a minute later, the main group (peloton) arrived and shot past. It was hard to focus on individual riders to try and identify who was who, but luckily Colette and Lynne were taking photos so we could check later. The chase was on, and it would only be a matter of time before the leading three were caught up by the bunch.

As they passed, several riders jettisoned their bidons (drinks bottles) in our direction. They make a great souvenir of the day, but although we’ve been to quite a few races now, this is the first time we’ve been able to pick any up. And we got three! The Movistar one was filled with a super-sweet citrus mixture that packed quite a kick. That would have got our bee going in double quick time!

Once the short-lived excitement died down, we returned to our bikes and continued along a single track road which then led to the main road back into Kelso, a matter of 6 or 7 miles away. In the meantime, the race still had over 30 miles to go, including the long, steep climb out of Melrose.

That gave us enough time to arrive at the town centre, lock up our bikes and get ourselves to the finishing line. The crowds were huge, and we needed to walk to about 100 metres back from the finish line before we could even get a view.

The announcer got us excited when he described a breakaway by British rider Alex Dowsett. We would have loved to see him get all the way to the finish and were ready to cheer him on. The crowd noise got louder and louder, then finally, I caught sight of a Katusha Alpecein jersey (that would be Alex) in the lead. But just as soon as I spotted him, a Mitchelton Scott rider shot past and I knew Alex had been caught.

That Mitchelton Scott rider was the Italian, Matteo Trentin, who won the sprint and went into the overall lead of the race. We stayed for the presentation afterwards before heading back to the car. It had been a great day out, mixing a gentle wee ride in with spectating on the race. The excitement of watching cycling live is very short-lived compared to seeing it on the telly, but it gives a whole extra dimension to the experience.

Oh, then we went home and watched the whole race again, as we’d recorded it while we were out!