As the exotic-sounding title suggests, we were not in our usual haunts for this ride, but on holiday in the Costa Blanca. Colette and I fancied some (almost) guaranteed sun for a cycling holiday after a long winter of taking our chances with the Scottish weather. We ended up in Altea at the Hotel Cap Negret, which is well set up for cyclists. We hired bikes through Ciclo Costa Blanca and took note of some of their suggested cycle routes.

To start with, we were slightly daunted by the amount of hills, but the first couple of short excursions we took showed that the roads were smooth and easy-rolling, and the gradients never got too hard, so we decided to try one of the recommended routes that headed up to Tarbena and beyond.

It has to be said that we found the flat cycling along the coast to be quite uninspiring, verging on the downright unpleasant, due to the amount of traffic. However, directly opposite the hotel is a lane which leads away from the hustle and bustle of the Costa, through agricultural back roads to the smaller town of Altea La Vella which lies on the CV-755 road. This road carries a more modest amount of traffic, often not much at all, and is mostly a steady climb, with a few downhill bits thrown in, leading up to the town of Callosa d’en Sarria. 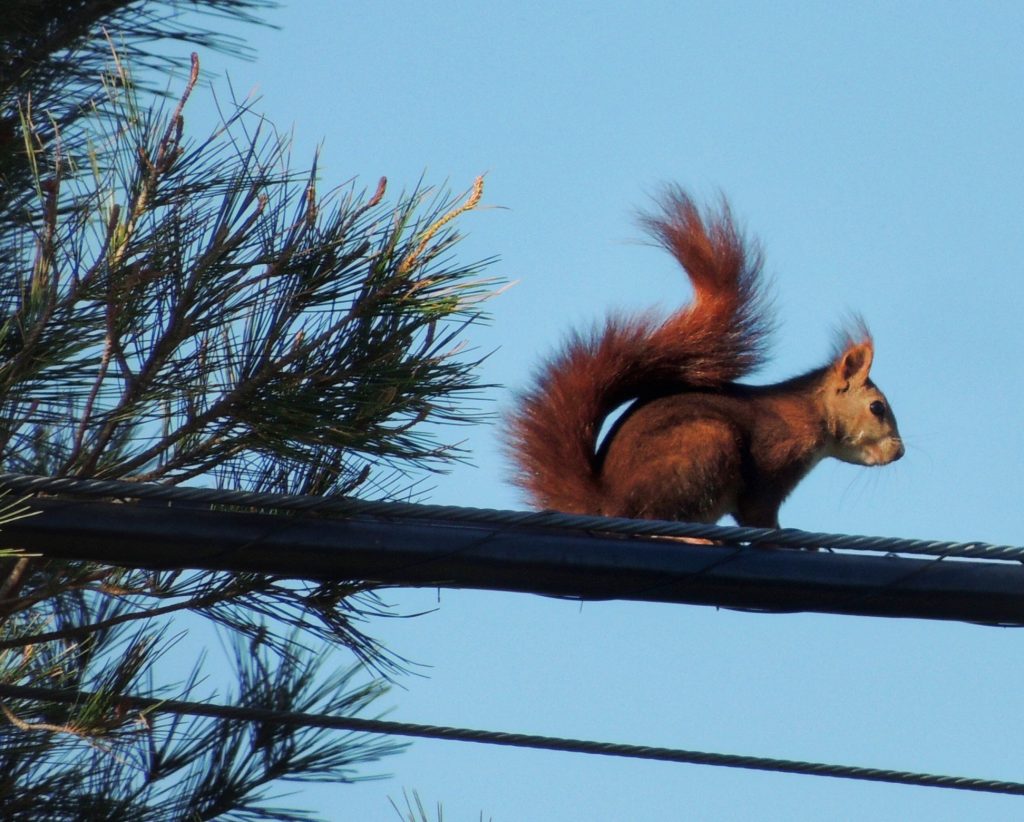 Tufty knows how to cross the road safely

As we were following this road to Callosa, we noticed something red and small dart across the road in front of us – a red squirrel! That made it a bit of a red letter day for me, as I’d only ever seen a few during my visits to the Scottish highlands. We were even more surprised to spot another just a minute or so later. We had caught it in the act of crossing from one side of the road to the other, by a less risky but more complicated method than just running across the road. This squirrel had what seemed to be a well-worked out route, involving getting from a tree on the right onto a telephone wire that crossed above the road to the left hand side. It climbed down the far pole halfway, accessing another tree, then another couple of poles, wires and trees, culminating in an impressive leap before disappearing into the wood. After that entertaining interlude and plenty of scope for photos, we got back on our way to Callosa.

Callosa is a decidedly un-touristy town, at the centre of which is situated a small roundabout that we grew to know quite well. On this occasion, we took the first exit onto the CV-715, taking us back out of town and starting to head north. We passed the entrance to the Fonts de l’Algar (waterfalls of the Algar river), which we visited on our “easy” first day, but this time we carried on to Bollula. With every twist and turn in the road, we could see the mountains come closer, till by the time we reached the small village, we felt that we were well into proper mountain country.

From Bollula, we carried on to Tarbena, which was only a few miles away, but a good thousand feet further up the mountain. The ascent was one of the most lovely ever, especially as I was pedalling at a “touring pace” to preserve my energy and enjoy the scenery as I went. Colette took her own pace and we met up again at a layby just outside Tarbena.

Carrying on into the town, we found a cafe for strong black coffees and mineral water (to replenish the water bottles). The Spanish coffee did a great job of invigorating us for the efforts ahead. 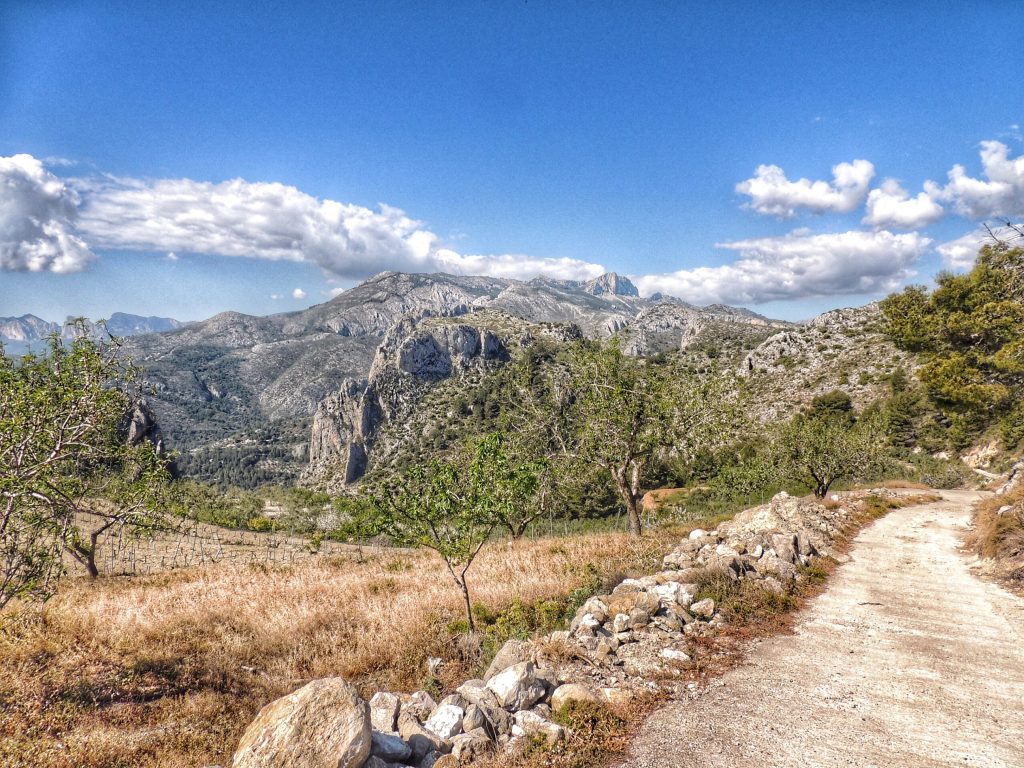 Just outside Tarbena, we took a left turn, signposted for Castell de Castells. That required more climbing before we reached undulating terrain on a kind of plateau near the top of the mountains. Somewhere along this part of the road, Colette spotted a snake crosing the road, and stopped to check it out. She had to divert an oncoming car round the obstacle to keep it safe. I saw that something was going on, and backtracked just in time to see the snake (identified as an adder) slithering off into the undergrowth on the other side of the road. 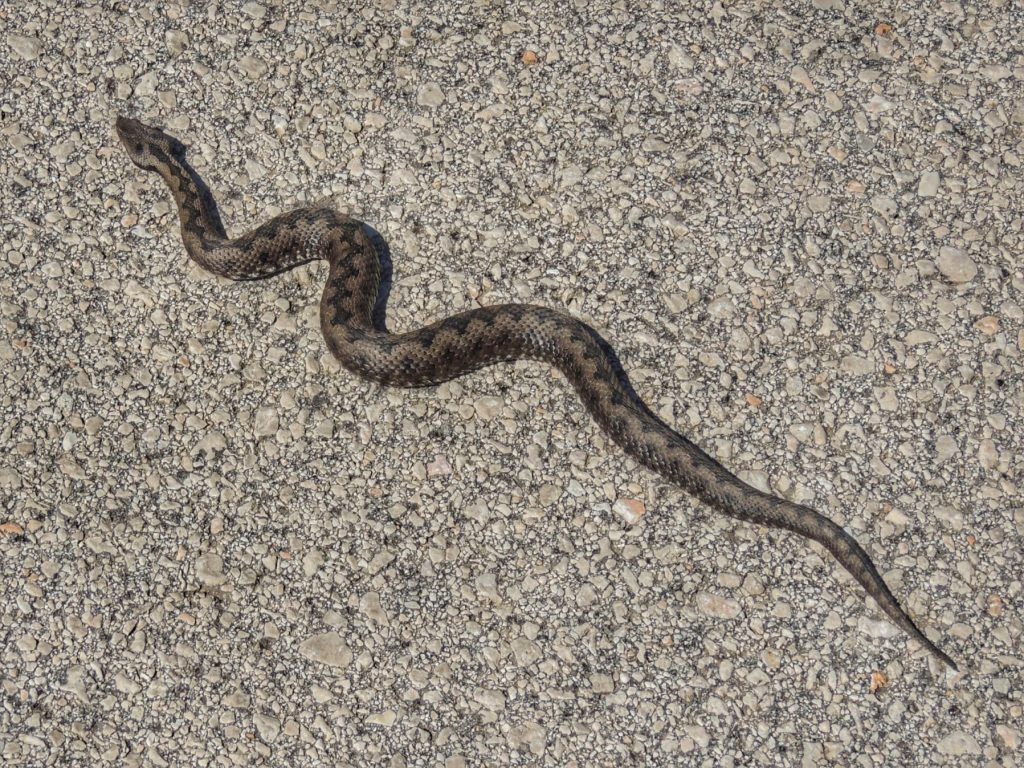 Why did the snake cross the road?

As we got nearer to Castell de Castells, the road got very steep (in a downwards sense) and it was all we could do to keep the speed down to a manageable level. So we didn’t look out for any of the hoped-for castles. By the time we reached the village, we were just happy to have made it down safely – the castles can wait for another visit.

It was a bit too early for lunch, so we had a wee biscuit each and carried on, with the intention of stopping in Benigembla. The next section was unusually quite flat, with just a hint of a downhill slope that kept our speed up nicely. That meant it only took 20 minutes to cover the 6.5 miles to Benigembla, where we found a roadside cafe for lunch. Simple bocadillas (filled rolls) were just the job, and we had by then got the hang of asking for them and the desired fillings in Spanish.

After lunch, it was just a short ride to the outskirts of Parcent, where we took a right turn, heading away from the town and up the side of a mountain. This climb, to the Coll de Rates, is one of the better known climbs of the area, rising a total of 1,115 ft in 4.0 miles, with an average gradient of 5%. Since I knew it was coming up, I decided to give it a decent go without stopping till I got to the top. I kept up a decent tempo, sometimes needing to go into my lowest gear, but never really needing anything lower. The hire bike seemed well suited to the terrain. 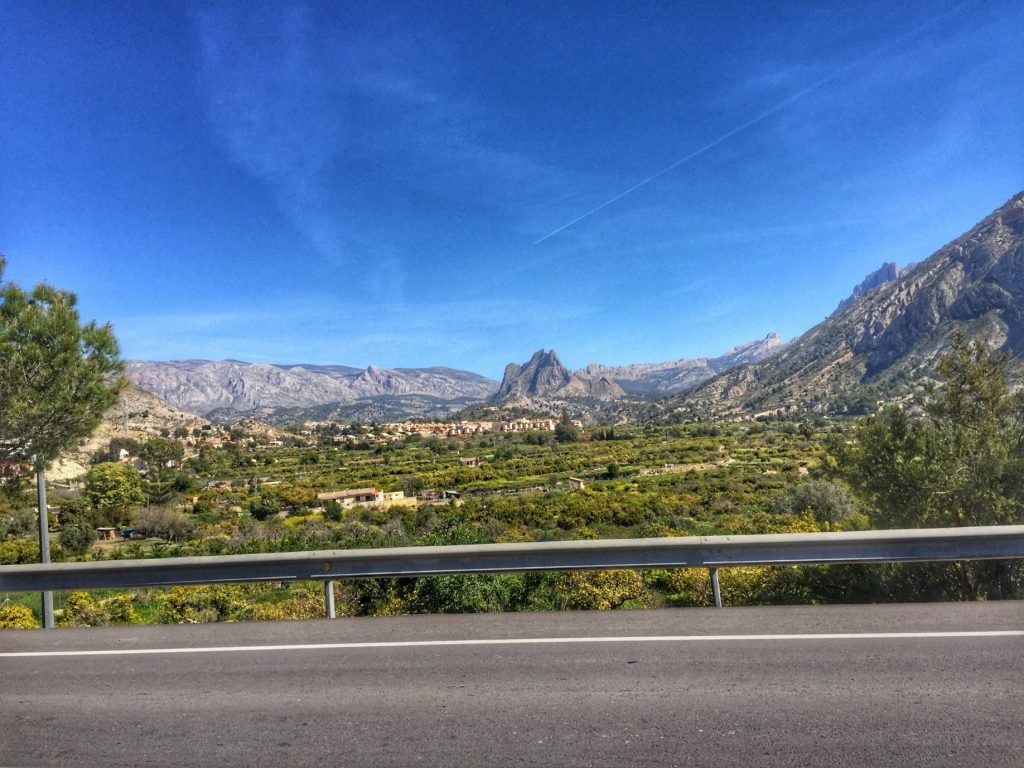 Another view from our ride, though we can’t remember where it was taken!

I got to the top in just over 30 minutes (about twice as long as the pros take, which I was well satisfied with) and waited for Colette to arrive. She didn’t feel the same need to crack on, so had stopped to take some pictures on the way up. We then carried on to the bar situated at the top of the road. The “no entry to bikes” sign took us aback a little, so we parked them just outside the grounds. I suppose it must get very busy at times, and you can’t expect to park your bike alongside the table then. Anyway, the cafe has a wonderful panoramic view of the area, although we were more interested in just rehydrating at that point!

After that, we got onto the descent back to Tarbena. It was fast at times, but not too fast for comfort. A little more climbing was required, then we came back to the junction where we had turned left before for Castell de Castells, closing the loop section of the ride. From there, we passed through Tarbena once more and enjoyed the twisty descent to Bolulla.

By this time, we were beginning to get quite tired, but thankfully the rest of the ride was mostly downhill. I say mostly, as there were several little ups mixed in with the down. As I said to Colette, if you can’t see the hotel, then we’re not finished with the climbing yet.

But finish the climbing we did, and after parking our bikes in the hotel’s secure bike garage, it was back up to the room for showers, refreshments, dozing, dinner and bed.