I’d planned for us to do this ride towards the end of Decamber, but we didn’t manage to get round to it until the new year. Going round and round the same old local roads was beginning to lose its appeal, so this day out in the Selkirk area was something to look forward to…

We arrived in Selkirk on a surprisingly mild and windless day, with light cloud cover and the odd sunny interval. Perfect weather for winter cycling in fact, though I still needed a full 4 layers, so “mild” is a relative term here.

Setting off from the car park of the newly reopened leisure centre, we headed to the centre of town, then took a way out that I hadn’t tried before. This took us up The Loan, which is a fairly relentless climb up to a crossroads where it meets the A7. After that, it was straight across and up a much less taxing climb out into the open countryside. After about 2.3 miles, the climbing was over and we were finally able to enjoy some coasting downhill. We turned right to pass through Midlem and then followed a more undulating route, though still with a general downhill theme.

A few miles before we reached Ancrum, the road became quite busy, but all the cars that passed us were soon stopping at the side of the road and people were getting out to look into the fields to our right, some carrying binoculars. We wondered if they might be twitchers, but then heard voices calling from the far end of the fields, as if trying to flush something out. So we ended up concluding that fox hunting was the most likely explanation. I was tempted to stop and ask, but part of me really didn’t want to know!

Once we reached Ancrum, we paused for a brief break to refuel, before setting off in a southwesterly direction on a minor road leading to Denholm. This road was mostly flat, which made a change, and as we cycled onwards, we were on the lookout for a castle on our right. 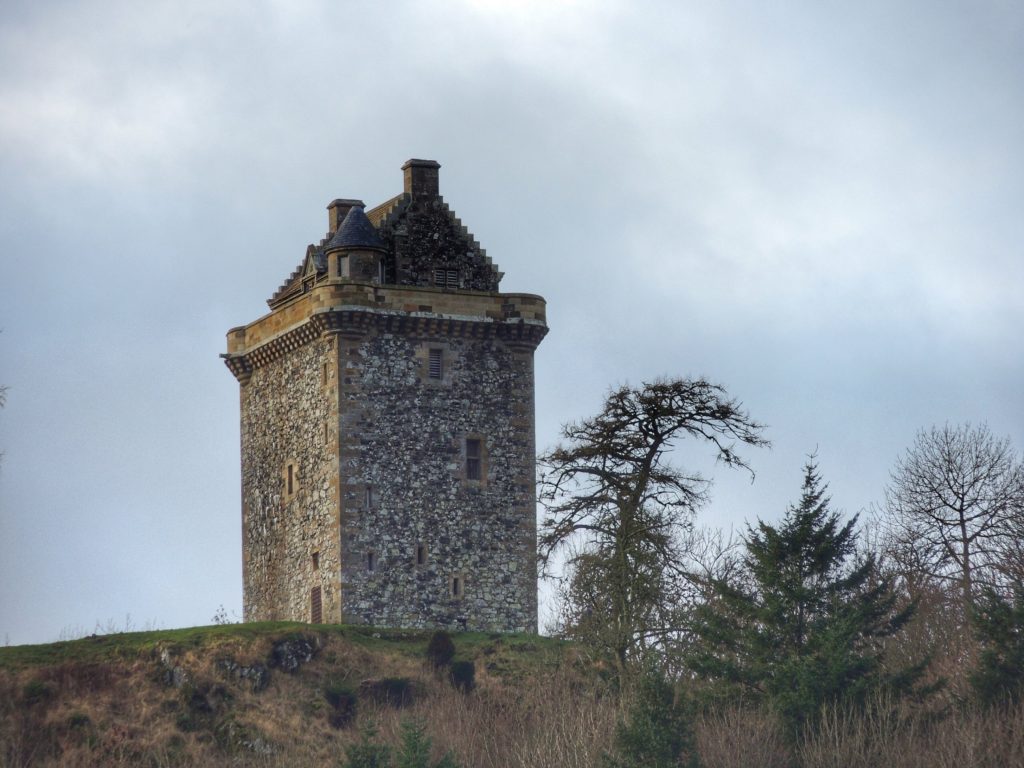 The castle in question was Fatlips Castle, and with such a splendid name, we certainly didn’t want to miss it. As it turned out, the castle was located at the top of a rocky outcrop and was pretty much unmissable. Similarly prominent was Minto Hill, a large triangular hill, rising up from the plain. I knew that once we got near, we would be close to our lunch destination of Denholm. 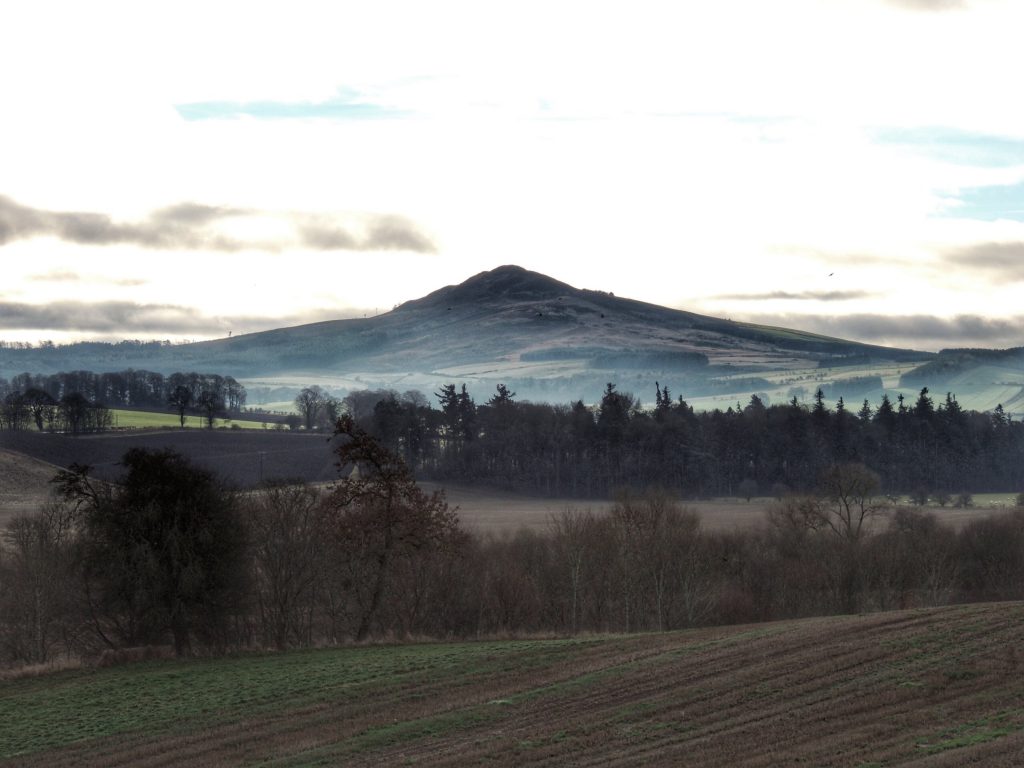 We had never visited Denholm before, so we didn’t know what to expect. We were pleasantly surprised to find a picturesque village / small town, with a large central green. I had done enough research in advance to know that there was a pub, so we should be able to get something to eat, but at one corner of the square, we also came across the Cream Puff cafe. As we generally prefer a cafe lunch to a pub lunch when cycling, we went in to investigate.

The cafe was quiet when we arrived, but soon after we ordered and sat down, it started to fill up. The food was excellent, definitely a cut above average, but we didn’t have room for any of the home baking. Next time hopefully.

One thing I overheard from one of the other groups of cafe-goers was “Dad’s got the keys to the castle”, which made me wonder whether they were talking about Fatlips Castle. Well, it turns out that you can actually borrow the keys if you fancy a visit to the castle, and then show yourself around. That sounds like a fun day out, so maybe we can arrange it the next time.

Leaving Denholm after lunch, there remained about 14 miles of cycling northwards till we got back to Selkirk. There was quite a lot of uphill crammed into those miles, but most of it was fairly gentle going, and with good weather and lovely surroundings, it was definitely not a chore. The only real steep part was a short section at Clerklands, followed by another mile or so of gradual uphill. 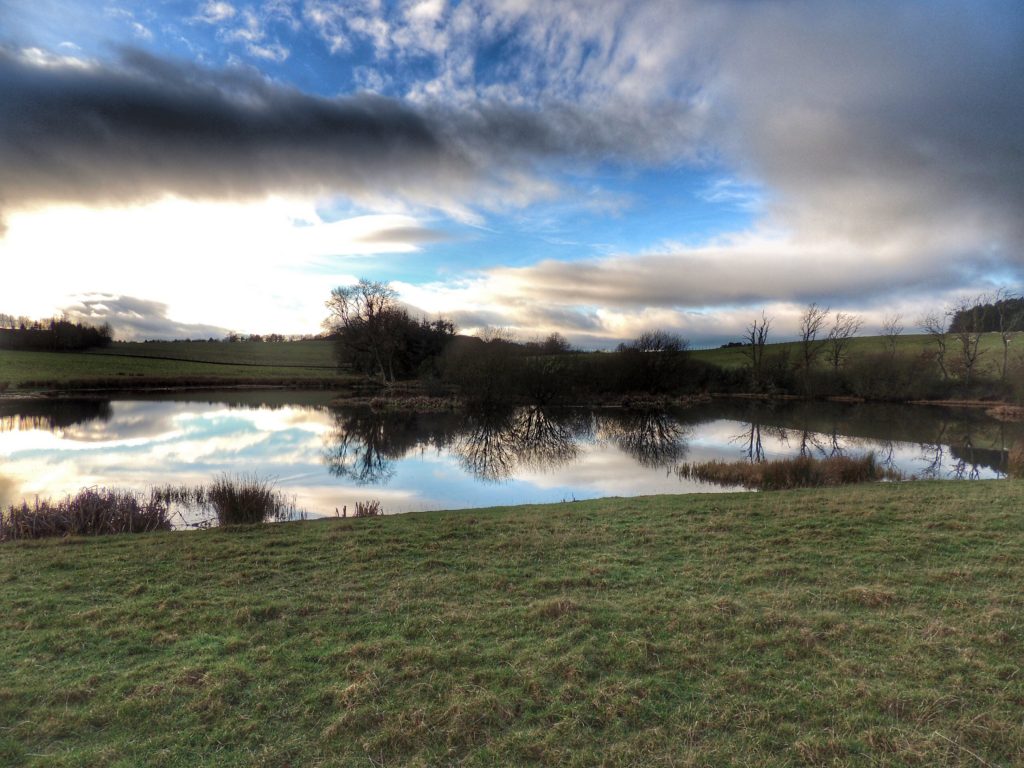 After that, we crossed the A7 once more and a final couple of undulating miles took us back to where we started. The car was packed up quickly and in a short 40 minutes we were back home again, just before dark, after a thoroughly enjoyable day out.