Last year, we didn’t do our annual cycle adventure with Colette’s brother Damian, so when he came up with a potential route for this year, we got it arranged ASAP, lest we miss the chance. Damian has been climbing various mountains up north, and on his way there and back, he realised that some of the quieter access roads would make for some very good cycling. The road he was most interested in was the Hope road, which leads west then north from Altnaharra, and runs past Ben Hope. From there, we would go east to Tongue on Scotland’s north coast, then head back southwards to Altnaharra on the A836, which goes past Ben Loyal. A circuit encompassing those two spectacular and inspirational-sounding mountains just had to be a winner.

We gathered in Beauly the day before and headed north on the appointed day, with the forecast for good weather just having taken a nose-dive. It was rainy to start with, but it was dry and much clearer with high cloud cover by the time we reached Bonar Bridge. However, as we closed in on Altnaharra, we ran into drizzle and then persistent rain. Damian wasn’t interested in doing the ride if it was wet and I don’t blame him, as the views would be obscured, and that was the main reason for going all that way after all.

As we arrived in Altnaharra there was a pulse of quite heavy rain. We sat in the car and thought about it for a couple of minutes. The rain then stopped suddenly and we got out – we agreed to just go for it and hope that the rain keeps off. Well, it did just that while we got set up, although it didn’t take long for the midges to find us, adding to the urgency of getting moving.

We then set off down the Hope Road, hoping above all for the weather to stay dry! The road is particularly narrow, even by Scottish single track standards, and almost completely lacking in passing places at the south end. This means that traffic tends to use other routes, leaving the road free for us to enjoy.

For the first few miles, we were riding through wide open moorland, with mountain ranges encircling us at a distance. Although it seemed flat, we were gradually gaining elevation, helped by a modest following wind. Suddenly a car appeared behind us, just as we were passing an opening to the left, so we were easily able to pull in and let him by. 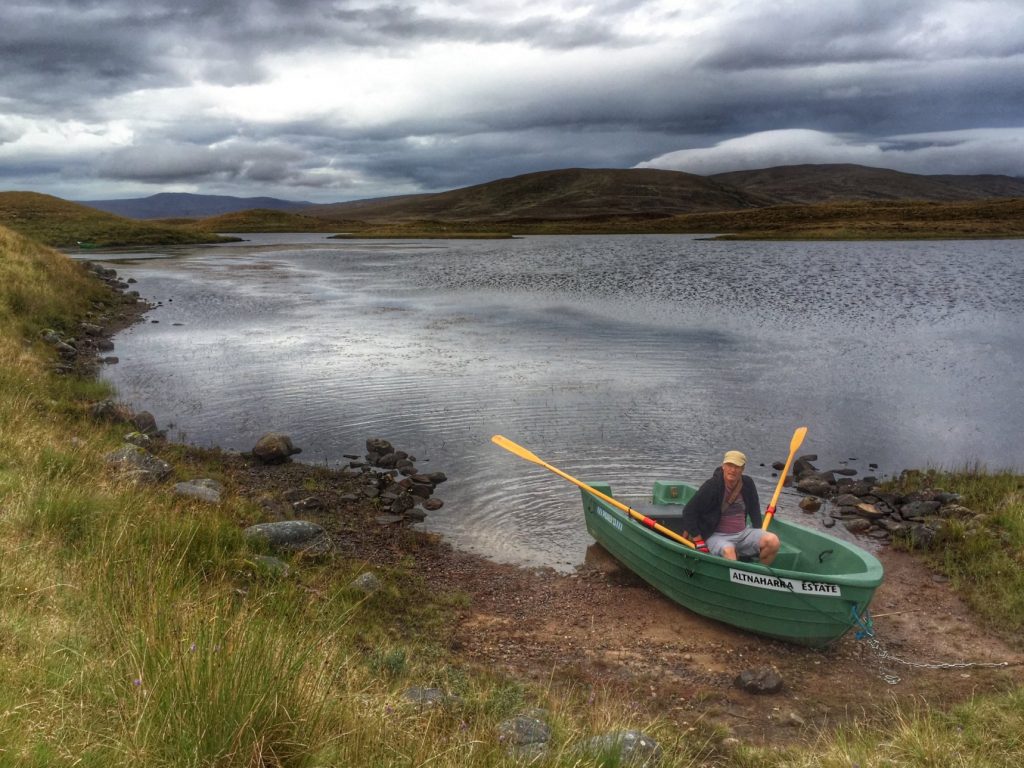 Since we were stopped, we thought we might as well take some photos and investigate the lochan to our right. After some dinghy antics from Damian, we pressed onwards.

After a while, we started going downhill and picked up speed, bringing us ever closer to Ben Hope. We paused when we reached the remains of a 2000 year-old broch next to the road. The artists impression on the info board next to it shows that it would have been an impressively tall structure, with lots of room inside to escape the midges. The Strathmore River ran alongside here and Ben Hope now loomed large above us, with a white bonnet of cloud obscuring the very summit. 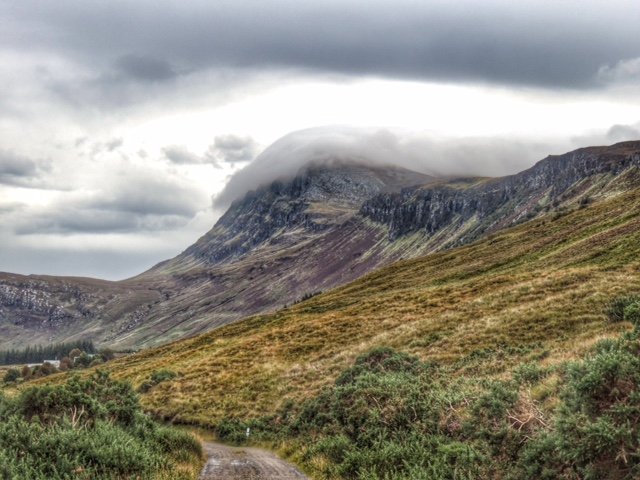 The midges drove us back onto our bikes, though we paused round the corner at the car park for those about to climb the mountain, where we wished a couple good luck who were preparing for the ascent. 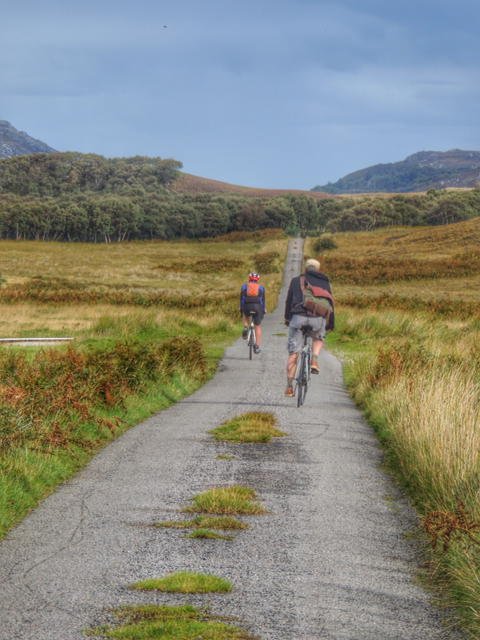 After that, we reached Loch Hope, which lay to our left, as the road undulated alongside, occasionally passing through woods. Finally, we reached a small hamlet, the first non-derelict habitation we had come across on our ride, signifying that we were nearing “civilisation” once more. A short descent brought us out suddenly to a T-junction with the A838, which led left to Durness and right to Tongue.

We took the right turn and immediately began a taxing climb. The first half mile or so was hard going, before the gradient eased slightly to something more sustainable. I paused at the side of the road after a mile and waited for Colette and Damian to arrive. The first part of the climb had taken a toll on Damian’s knees, so he had to get off and walk every so often to stop them cramping up.

At the top of the climb, we got a great view south to Ben Hope, and also Ben Loyal where we were headed later. To the north, occasional vistas opened up, offering views of the North Atlantic with nothing bar water and ice between us and the North Pole. However, our next destination was Tongue, which was also visible in the not so far distance.

To reach Tongue, we had a fast descent (made a little scary by a strong cross-wind from the south) till we reached the Kyle of Tongue. This is an inlet from the sea, which is crossed by a causeseway. The sun was now shining warmly, giving the shallow sandy bottom of the Kyle a lovely azure glow. We couldn’t stay long to admire it, as we needed to get some food. Indeed, Colette shouted “Lunch!” and sped off in the direction of Tongue. I did my best to catch her up, while Damian followed with less urgency. 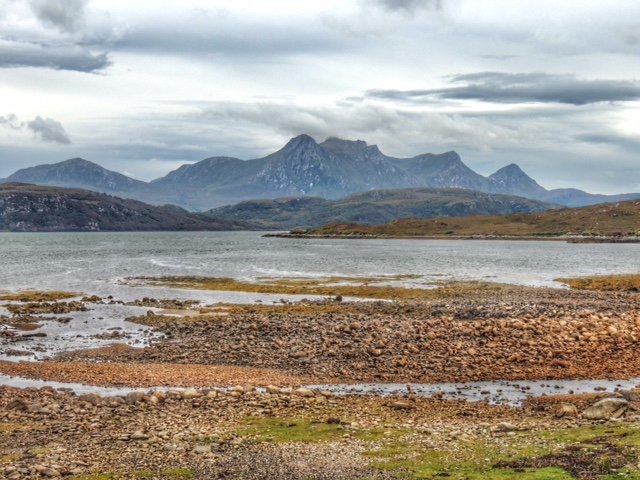 Ben Loyal from Kyle of Tongue

After a short discussion of the merits of various eateries in Tongue, we ended up stopping at the Spar, which had a small informal cafe. We had lunch there and discussed the way forward. Damian wasn’t confident about his knees holding up for the remainder of the cycle, and although he felt fit to walk with the bike, we had time constraints, including a booking for dinner at our next destination.

So following lunch and after getting ourselves onto the A836 heading south, Colette and I went off and left Damian behind. No, we weren’t abandoning him; how could we when Ben Loyal was the theme mountain of our return leg?! The idea was that we would go back to the car, while Damian continued at his own pace, then we would drive back to pick him up. 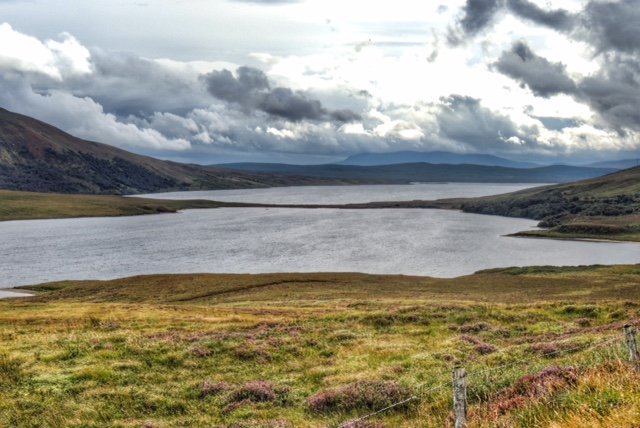 There were a few miles of climbing after Tongue before the road plateaued and we started descending again. The multiple peaks of Ben Loyal and its companions made their presence felt on our right as we descended to Loch Loyal, which ran for several miles on our left. Progress along the lochside was slower than expected, due to a significant headwind. We could also see rain in the distance, rapidly coming our way. 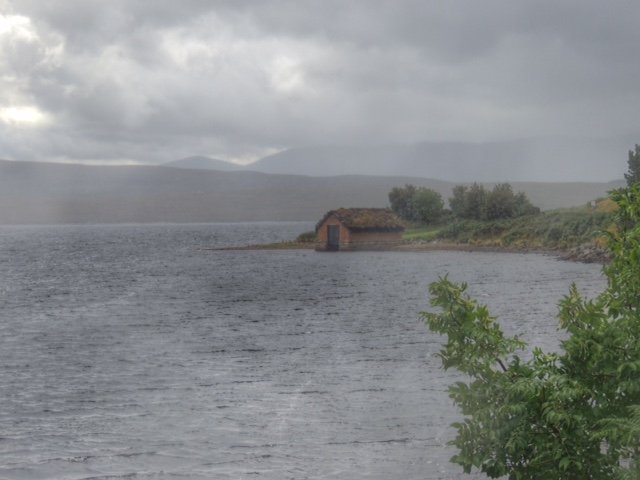 After passing the grass-roofed boathouse, the rain rapidly came on. At least it wasn’t particularly cold rain, and it certainly didn’t slow us down very much for the half hour or so it lasted. In fact, the sun immediately came back out again, in time to illuminate the next climb as a shining ribbon of wet road running up the hillside.

Initially, the climb was on new tarmac, which gave me a boost up it. The gradient was perfect for me to push on and make good progress, rather than be resigned to a long hard slog. There were several false summits, but when I was finally close to the actual top, I stopped to check on the map for sure, then went back for Colette.

Once we both reached the summit of the climb, we were only a few miles from the car, all downhill. Colette suggested that I went off by myself, so I covered the remaining ground as fast as I could under the circumstances (i.e. with quite a lot of traffic on the road). When Colette arrived, I locked our bikes to a fence and we headed back in the car.

When we reached Damian, he was walking along, pushing the bike with one hand and speaking into his phone with the other. He was halfway up the final climb, and would certainly have made it all the way had we not the time constraint to worry about.

Our next destination was Achiltibuie, with even more jaw dropping scenery on the way. That journey was by car, but we will be back by bike some day.

As far as today’s cycle was concerned, it really did live up to expectations, and true to its name, hope and loyalty played a big part. This day will live long in our memories.