Advancing my breadcrumb trail further northward, this ride took me through the Cairngorms by way of the Drumochter Pass. This was always the way I’d planned until quite recently, when I read up about the Gaick Pass. This alternative is somewhat shorter, but it does involve going cross-country into the mountains along landrover tracks, narrow walking tracks and wading through rivers. It all sounded quite exciting, but when the day of the ride approached, the weather forecast started looking gloomy. So after agonising about the options for some time, which included postponing, I decided to take my mountain bike and make the final decision when I got to Bruar.

The rain was coming down steadily as I unpacked the car in the House of Bruar car park. I was glad of my bright yellow Aldi waterproof jacket as I headed out west along the B847, though it wasn’t long before the initial unpleasantness of the rain wore off and I got used to it.

I almost took the wrong turn at Calvine, but after checking the map, I carried on towards the junction with the A9 until an opening on the left took me onto the cycle route that leads to Dalwhinnie. This is part of national cycle route 7, and makes use of various parts of the old A9 as well as some custom-made cycle path.

The first part, running alongside River Garry, was pleasant (if you ignored the rain), with the dark peaty water cascading over rocks. That made me wonder about the state of the rivers that needed crossing up in the Gaick Pass. Would they be in spate with all the recent rain?

About 7 miles in, I reached Dalnacardoch where, if I wanted to do the Gaick Pass, I would have to cross the A9 dual carriageway. Looking up in the direction of the Gaick Pass, the mountains were enveloped in cloud, meaning I wouldn’t get much of a view if I went that way. So that decided it for me, I was doing the easier option, sticking to route 7, and I could investigate the Gaick Pass another time. 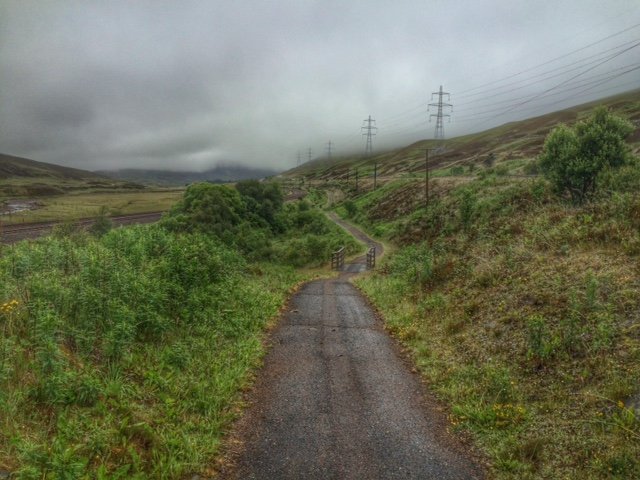 The spine of the Highlands

For the next few miles, the cycle path stuck quite close to the northbound side of the A9 dual carriageway. To be honest it wasn’t very picturesque, with the proximity of the traffic, the railway on the other side and electricity pylons dominating the scene from higher up the hillside. If you took them all away though, the cycle path was nice to ride along, with plenty of undulations, turns and little bridge crossings to keep you interested. 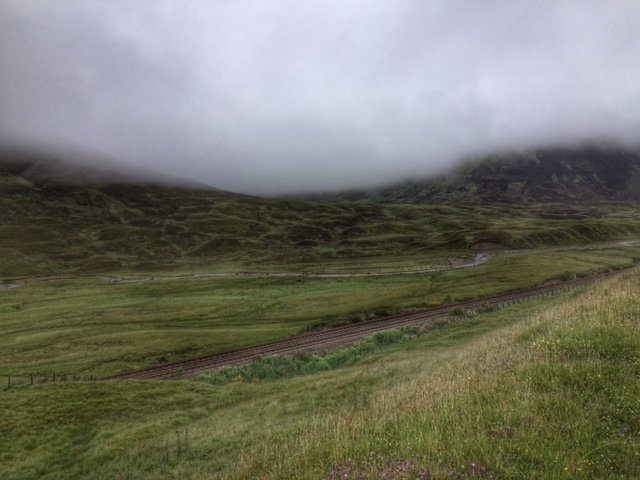 Drumlins in the mist

A couple of stretches ran right next to the road, and it was while cycling along one of those that I decided it was time to take a swig from my water bottle. When I looked down to put it back in its holder, I realised that up till now I had been looking over the top of my glasses, which were obscured by raindrops. A dull thud on the path told me that my blind attempt to reholster my bottle had failed. I stopped and turned round, to see the bottle roll across the grass verge and onto the dual carriageway, with two cars rapidly approaching. The first one moved to the other lane, leaving me enough time to dodge out and retrieve it before the second one arrived. I felt such a twit!

The surface of the route up to this point had been quite acceptable, but as I got closer to the Dalwhinnie side, there were some pretty dodgy bits. Worst were the bits of smooth tarmac that were covered with loose gravel. I was glad that I was using a mountain bike, which is definitely the most fun way of doing this cycle path. It would be possible on a road bike if you took care on the tricky bits, but that would definitely be a lot less fun.

Approaching Dalwhinnie, my speed increased to over 20mph, which was when I realised that I was now going downhill. Once through Dalwhinnie, route 7 took me on a quiet minor road, away from the noise of the A9. It was much brighter now, and the rain had stopped. I began to wonder whether I shouldn’t have tried the Gaick Pass after all.

A few miles later, the road reached the A9 once again, where it was necessary to continue alongside on a cycle path, much of which made use of the old A9. Pretty soon, I came to the Ralia cafe, where we have stopped many times when driving up in the car. Arriving by bike was a first though! 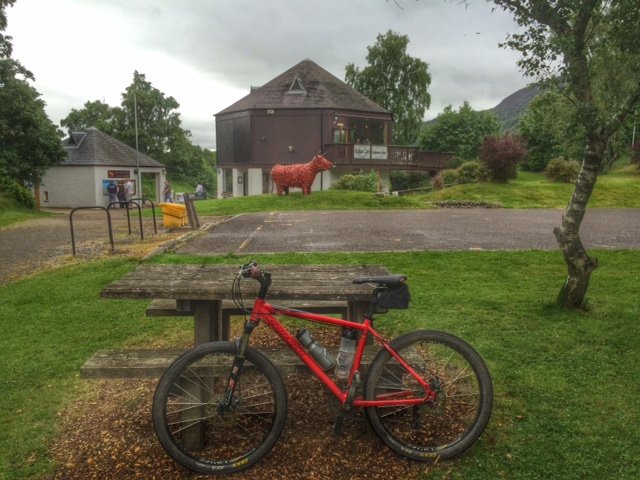 Stopped at Ralia for lunch

I used the facilities and went up to buy a takeaway coffee, but when I was in the queue and raking about in my backpack, I couldn’t find my money. Maybe it was in the saddlebag on my bike, which was propped up outside being eyed up by a couple of teenagers. That made me a little nervous, especially when I remembered my new Garmin cycle computer was also sitting there on the bike. So I gave up on the coffee idea, retrieved my bike and took it to a bench, where I got out my sandwich (which was next to my money all along) and had lunch sans hot drink.

By the time I had finished my sandwich, I’d drawn the attention of a number of midges. I was glad that I didn’t have that coffee after all, as by the time I’d finished it, there might have been a full-on midge attack. So it was time to get back on the road, which took me to Newtonmore in no time at all.

The route continued towards Kingussie, using a path alongside the road for much of the time. The scenery was quite different now, with flat, green farmland to my right.

Arriving in Kingussie, I came to some traffic lights and managed to stop in the wrong gear. I was fussing about that when the light went green, and hurriedly got going again without noticing that route 7 actually went right here. I only realised that I was on the wrong road after a few miles. I could have gone back, but decided to stay on the current road to Kincraig, where I could turn right and join up with route 7 again.

Despite being a minor road, there was a steady stream of traffic. It might be something to do with the current roadworks on the A9 and some people taking a scenic detour to avoid them. At least it wasn’t busy enough to cause any problems.

As I was happily pedalling along this road, I happened to exchange glances with a lamb that had its head poking through a fence. Something about it didn’t seem right, so I stopped and went back to check. It was a square mesh fence, and the poor thing couldn’t get its head back through because of its wee horns catching on the wire. I had to grab it by the horns and turn its head by 45 degrees so that the horns slipped through on the diagonal. It only just fitted through. Well, he bolted off up a banking and through another fence to rejoin his mother for a drink of milk. What a happy ending – I was so glad that I stopped and it wouldn’t have happened if I’d taken the right road out of Kingussie!

At Kincraig, I turned right down The Brae, taking me alongside Loch Insh. The place was buzzing with visitors; some paddling on the loch and others just walking along the road. There were “no parking” cones along the roadside here, and further along there was a very full car park. I’m guessing it’s not free parking!

Next up, I turned left onto route 7 and found myself panting as I went up the only real climb of the day, and it didn’t last all that long either. From there onwards, the road undulated fairly gently through pine forest. This would be ideal road bike territory, but I still made reasonable time on my mountain bike, arriving in Aviemore at almost exactly the same time as Colette did in her car. 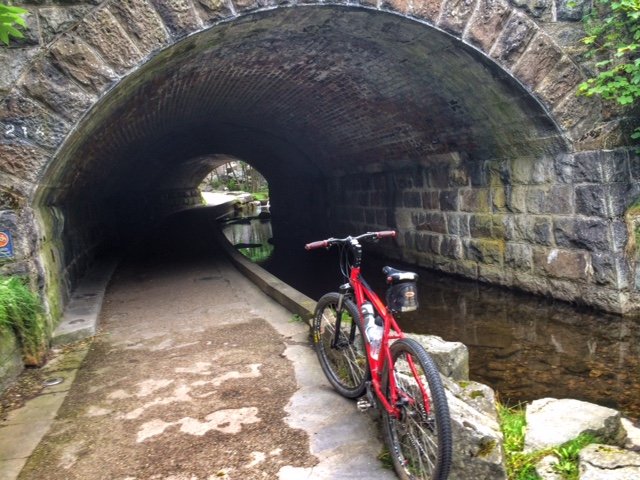 Aviemore on the other side…

It took a wee while to find where she parked, then I loaded the bike into the back of the car and she drove me back to Bruar. Perfect organisation and an interesting day’s cycling, although the weather could have been better. Next time, all the way to Beauly…