On Wednesday evening, I joined some of the Lothian Cyclists for a wee outing, but this time it was a little different… doing laps of a 5-mile circuit on the tiny island of Watopia in the South Pacific, lying somewhere between the Solomon Islands and Fiji! We didn’t need to get our passports out though, as this was “virtual cycling” done from the “comfort” of our own homes. We had put our bikes on static trainers with a speed sensor on the rear wheel linked to a computer program called Zwift, which allowed us to cycle round a virtual world (albeit modelled on a real island) alongside hundreds of others.

I got logged in a little early and cycled up and down the flat section close to the starting point to warm up a bit and to carry on trying to get the hang of the software. At one point, I saw a huge crowd of cyclists go past, all huddled together in close formation. This was a group ride featuring pro cyclist Jens Voigt, who clearly attracted a big following. Our group was a lot smaller, just Phil, Alan and myself, and luckily we managed to find each other and get started as planned, despite the island being so busy.

The idea was to start with a fairly gentle pace for the first lap, with the main aim being to just stay in sight of each other. Phil was giving out regular messages, but I was finding it hard to reply using my ipad, as the tablet holder that I’d bought only works in landscape orientation and the Zwift mobile app uses portrait, so I had to crane my neck through 90 degrees and type while pedalling hard at the same time. Not easy! 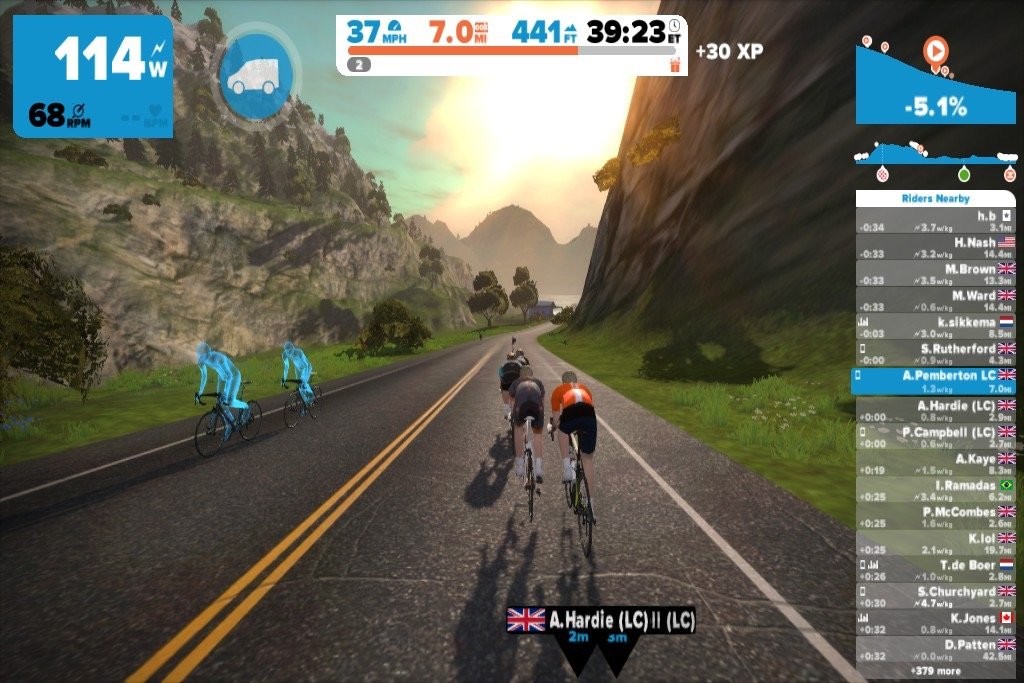 As we hit the big hill, our apparent speed went right down to about 2mph. I think I might do better than that in reality, but probably not by much! However, over the other side, we picked up speed on the downhill, and I was soon hitting 40mph. At the end of the first lap, Alan pulled out as his trainer was making him work a lot harder than Phil’s or mine for the same apparent “virtual” speed. Phil and I carried on for another lap, going a bit quicker this time, and we both gave a bit extra when we reached the sprint sections. 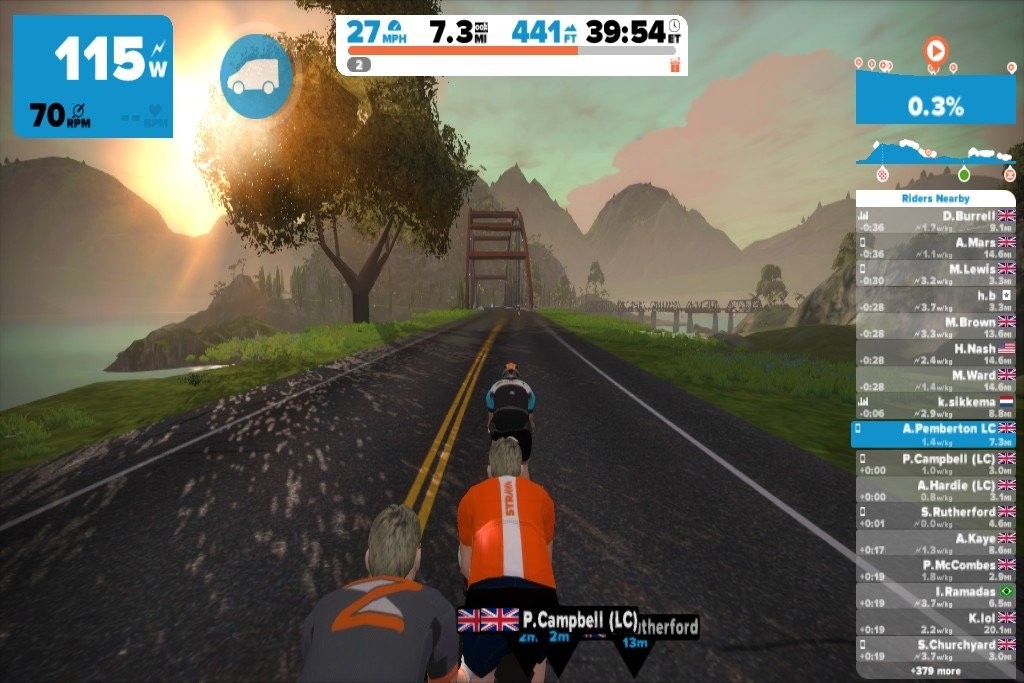 That’s me in front, Phil with the orange top, then Alan closest to the camera

All in all, it was good fun, and a much more engaging way to spend an hour on the turbo trainer than watching the telly or listening to music. With good cycling weather days few and far between at the moment, entering the Zwift world instead sounds like a very acceptable alternative.

I thought it might be useful to document some of the challenges in getting everything set up for Zwift, including my dalliance with the murky world of power curves…

You need several things to make this all work: a bike, a turbo trainer, an ANT+ speed sensor, an ANT+ dongle for your computer, and of course a computer. I had all except the sensor and dongle, but these are easily available online, so no need to go into details there.

I already had a turbo trainer (more on that later), so that just left the computer. The minimum requirements are a 64-bit computer running Windows 7 or up, or Mac OS X 10.7 or up, with 4 GB of RAM and a graphics card with at least 1 GB RAM. This was my main stumbling block, and I almost gave up before I started. The best thing I can advise is to download the program and try it out on your own computer before investing in anything else. My first attempts ended in failure, as I tried it out on 32-bit Windows 7, and the computer said “Whoa!”: 64-bits really is a deal-breaker.

Next, I located my daughter’s previous laptop (64-bit, yeah!) and fired it up, only to be met with a flashing caps lock indicator, telling me that the CPU was dead. The last chance was a 6-year old Macbook running OS X 10.6.8. Although I tried, the software wouldn’t run on this due to the outdated operating system, but maybe I could update it…? Yes I could, and it was a free download too! The only drawback was that it took about a day to download and install. Then I tried it out…

With Zwift, it’s possible to log in without having the ANT+ dongle and just watch the action from the sidelines. There’s a free trial too, so you don’t have to shell out any cash to just test the system. Well, it loaded up fine and allowed me in, despite my Macbook only having half of the minimum RAM and a quarter of the minimum video RAM. The downside to this was watching in the lowest possible resolution and with a very low frame rate (maybe 4 fps?). Despite this, it seemed quite usable, so having come this far, I went ahead and bought the sensor and dongle, as by this time, I really wanted to join in!

Now it’s time to go back to the matter of my turbo trainer. It’s a BTWIN In’Ride 300 model from Decathlon. Unfortunately, this model isn’t one of the supported trainers, and I very much doubt it ever will be. This means that you can use it but your exertion on the machine (measured as speed) isn’t realistically calibrated to an estimated power output (in watts). The supported models have all been calibrated using a power meter to give a power curve, realistically linking speed with power; Zwift call this zPower.

If you don’t have a supported trainer, you are encouraged to select the “unlisted trainer” option, which gives you a default power curve that at least allows you to join in, but is unlikely to be anything near accurate. Having done this, it was quite dispiriting on my first trial run to find that I had to pedal really hard just to do 11 or 12 mph on the flat. The power curve was clearly way off what it should be for my trainer.

That encouraged me to look into power curves in more detail, and luckily came across this website: powercurvesensor.com. The curves for lots of common models are published there (though sadly, not my BTWIN trainer). It is quite clear that the curves vary a lot between model, and the shape of the curve is very different between magnetic and wind and fluid-type trainers. So for Zwift to have one power curve to cope with all manner of different trainers is not really going to work. It would be much better to at least have a generic curve for each of magnetic, wind and fluid, in my opinion anyway.

Since I had invested in a speed and cadence sensor, I was able to build up a graph for the default power curve by noting down the power output stated in Zwift when pedalling at a constant cadence in each of my gear combinations. The latter was converted to speed using the calculator on the Sheldon Brown website. Speed vs power is shown in the graph below. 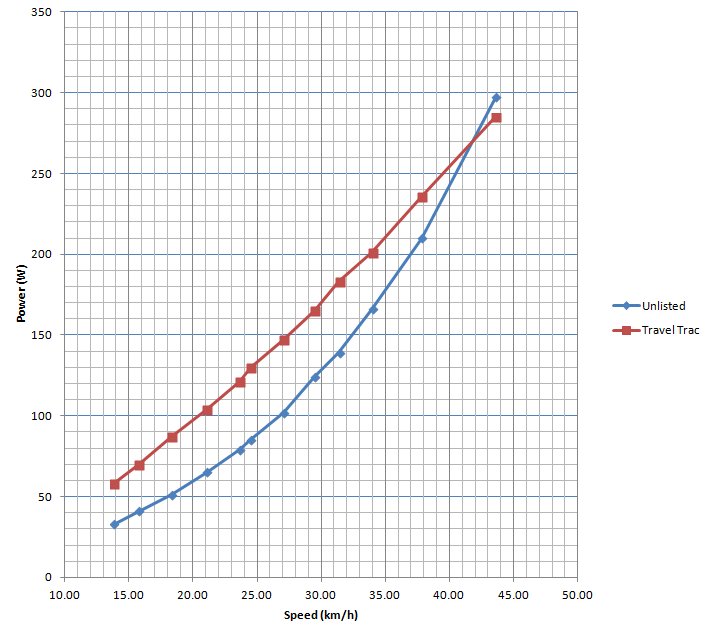 What I also did is change to the Travel Trac Mag+ trainer option and do another power curve estimation. This gives a more linear response, which appears to be more typical of magnetic trainers. What does this show? Well, if you are pedalling at say 20 km/h using Zwift’s unlisted trainer option then you would be credited with a 60 watt output, compared with about 95-100 watts if you had selected the Travel Trac Mag+ option. That’s a big difference. However, by the time you are giving it 40-45 km/h, then the difference becomes minimal. Sadly, I don’t cruise at 250W!

For me, it made sense to stick with the Travel Trac Mag+ option, as it makes the response of my virtual cyclist seem much more realistic. I would certainly recommend it as a starting point if you have an unlisted magnetic trainer. This model is quite a low powered trainer, with a limit around 400 watts, so you won’t risk flying round the track at high speed if you get it wrong. However, if you selected one of the more high powered trainers when in reality you had a bog standard low end model, that really would be cheating!!!

One final thing that probably is worth mentioning is how to change between trainer models. After making the selection for the first time, there doesn’t seem any way to get the trainer menu back up again, at least with the Mac software. So you need to seek out the “prefs.xml” file and delete the line starting with <LASTTRAINERDEVICE>*. When you load up Zwift again, you will be able to select the one you want. *Of course you do this at your own risk.

Although the way I have Zwift now feels realistic, I am under no illusion that the power output that I’m seeing is particularly accurate. Hopefully it isn’t way off, and besides, if I stick with it and keep the trainer setup identical from ride to ride, then I should be able to track any improvement (or otherwise) in my fitness over the time I use Zwift. So long as I don’t stray into the top half of the scoreboard, surely nobody is going to feel cheated.