This time we went down to the borders for a classic day ride, linking four of the historic abbeys of the area. We were cycling with our Lothian Cyclists pals, so we gathered together at Melrose close to abbey no 1 on a cloudy but calm summer’s morning.

Alison, our leader for the day, was ready to provide some key facts at each abbey, so I can report that Melrose Abbey was founded in 1136 and is reputedly the burial place of Robert the Bruce’s heart. 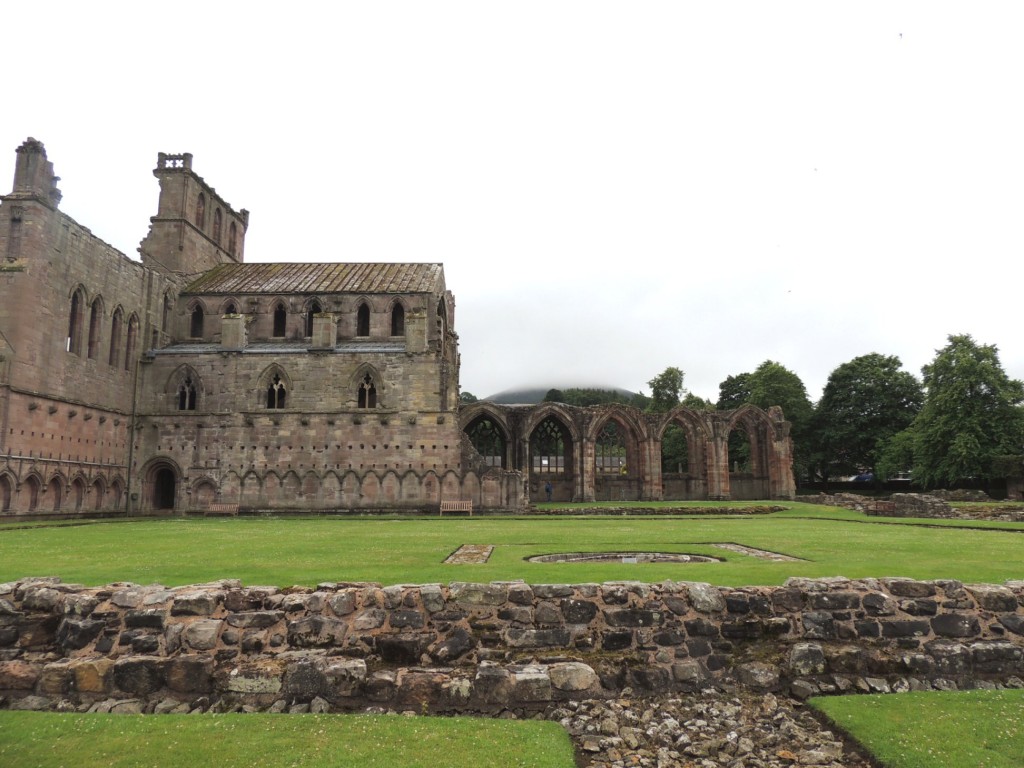 We set off on our route, which is occasionally marked at the roadside by blue signs with a [4] on them. To start with, we left Melrose, crossed the main road and skirted our way round the Eildons. These are the three pointy hills next to Melrose which make an unmistakeable landmark, and after which the Roman fort in the area was named “Trimontium”.

The road took us through Newton St Boswells, after which we crossed the A68 and continued northeast along a quiet single track road, crossing the River Tweed on a footbridge before arriving at Dryburgh Abbey. The abbey wasn’t visible from outside the grounds, so I led a detour round the path on the left to try to catch a look. After that failed, Colette went up to the ticket office and explained that she was a Historic Scotland member but had forgotten her card. The man in charge was kind enough to let her in to take some photos of abbey no 2. Did you know that Sir Walter Scott is buried there? Well you do now. 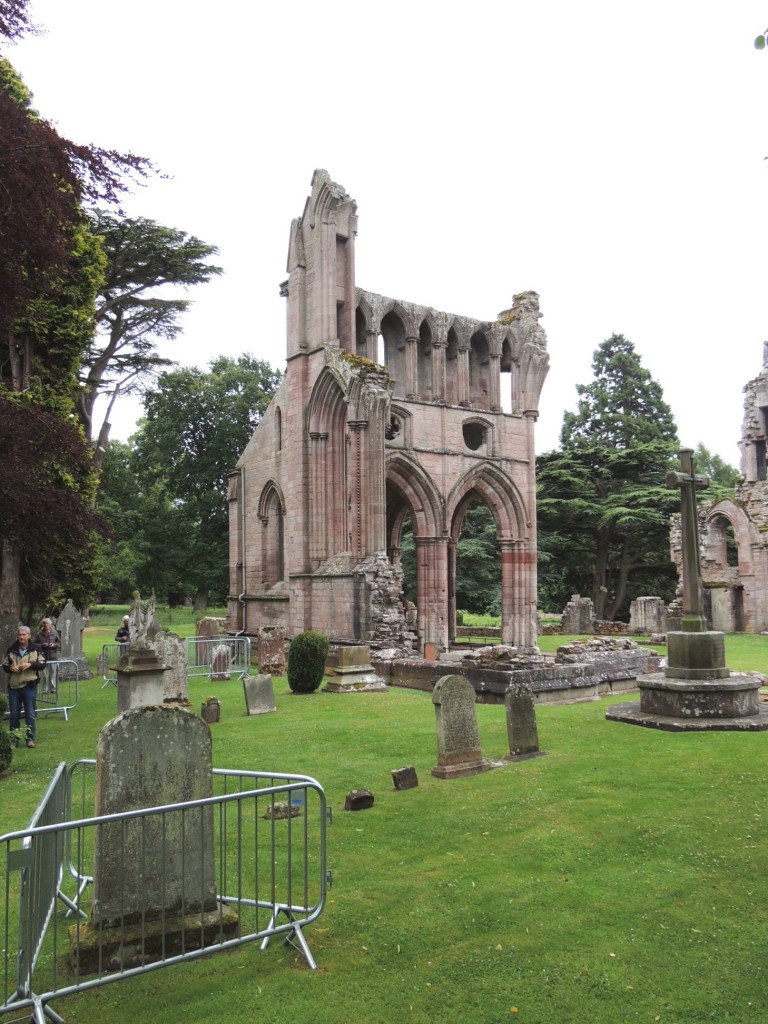 Our next abbey was in Kelso, which took us further east. After doing our best to miss a turning, the front group were set back on track and we continued along some peaceful and gently rolling country roads. These came out at the A6089 just before Kelso and we arrived in the town just as the drizzle started. We split up into two groups to get a cafe stop. I followed Jill who was making off purposefully towards one particular cafe, The Meringue Place.

I felt a bacon roll coming on, so didn’t order a cake, though my tea came with a small meringue on the side. Stephen ordered a slice of lemon meringue pie, which turned out to be enormous and looked amazing. I know what I’m having next time! 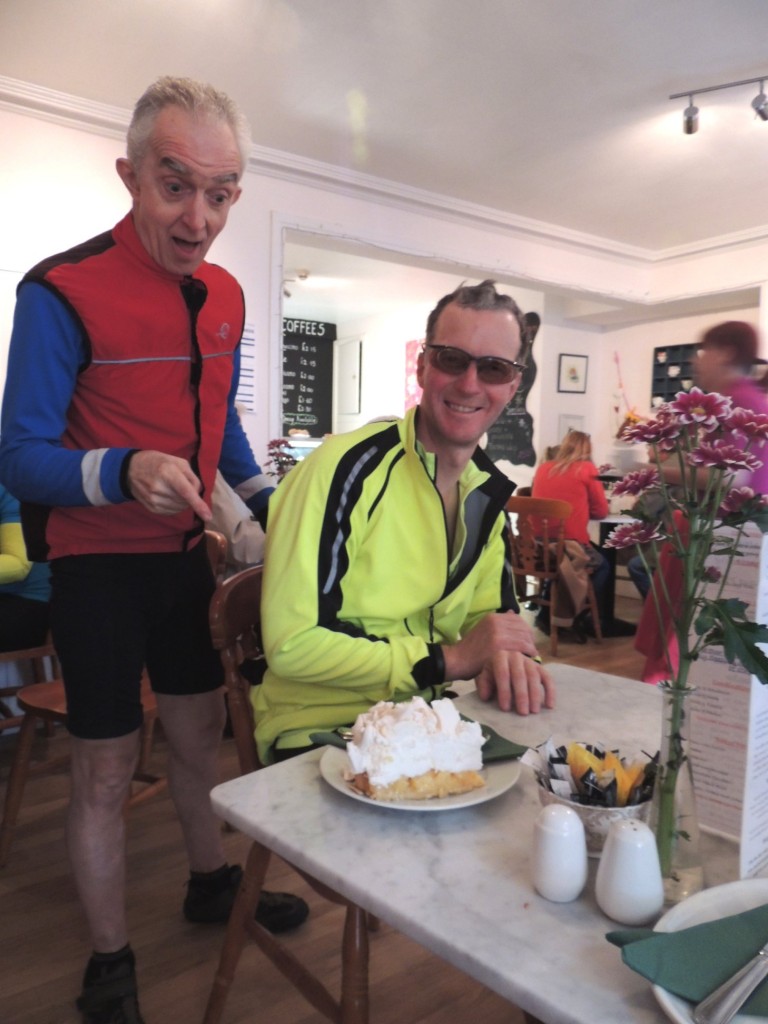 Colette wondered if her friend Dotty who lives in Kelso might be somewhere nearby, so gave her a call. She was, as it turned out, and popped over on her lovely retro style shopping bike to say hello before we got back on the road. 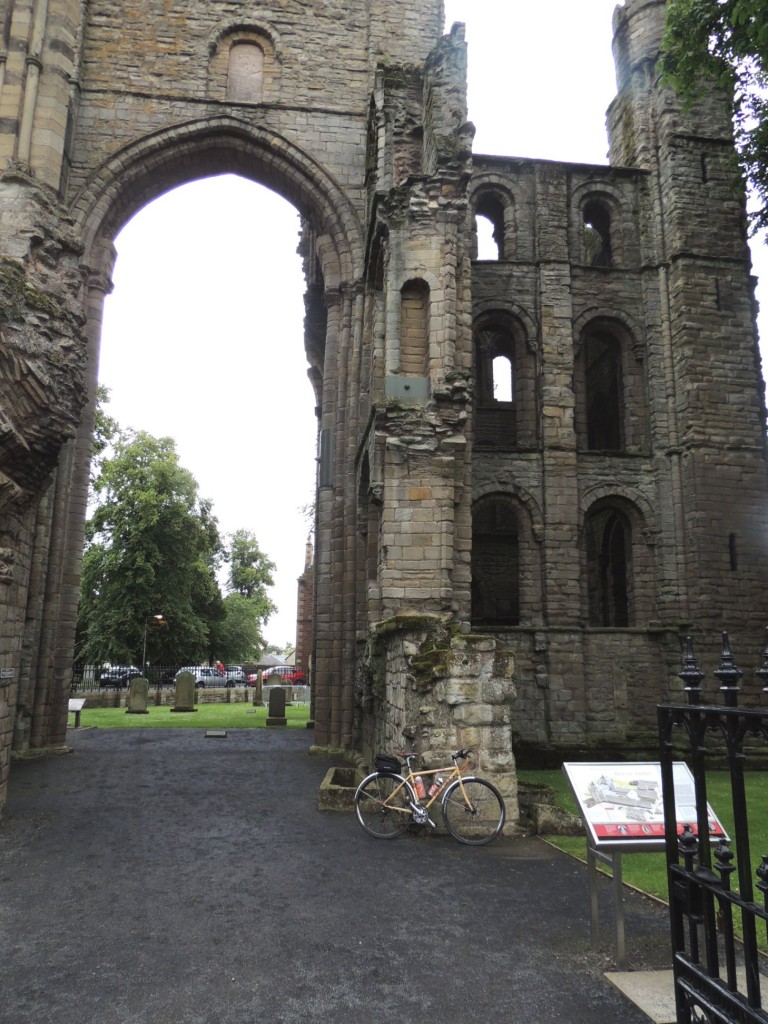 We stopped at Kelso Abbey on our way out of town, with the rain apparently petering out. There we learned that the abbey was laid to ruin under the orders of Henry VIII. Its location so close to the border with England must have made it a prime target when Henry was going through his abbey destroying phase. It makes you wonder how different the world would be if things had worked out better with his first wife…

Back on our bikes, we left Kelso en route for Jedburgh. The rain started again and threatened to become a bit of a problem, but thankfully only lasted about 10 minutes. We paused at a junction for the raincoated ones to remove their outer garments and let the steam out. Where we had stopped there was the option of a short cut missing out Jedburgh, but we stuck to the recommended route, which took us over the River Teviot and into more undulating countryside.

At the top of one of the undulations was Cessford Castle, where we stopped for a couple of minutes to soak in the history and take on some food and drink. It was well into lunchtime and with a fair few miles left to Jedburgh, we needed to keep fueled up. The next few miles included a fairly long downhill section followed by a longer climb, though with no really steep gradients. Finally, we came onto a fast descent into Jedburgh, where the impressive abbey came immediately into view in its dominant position. 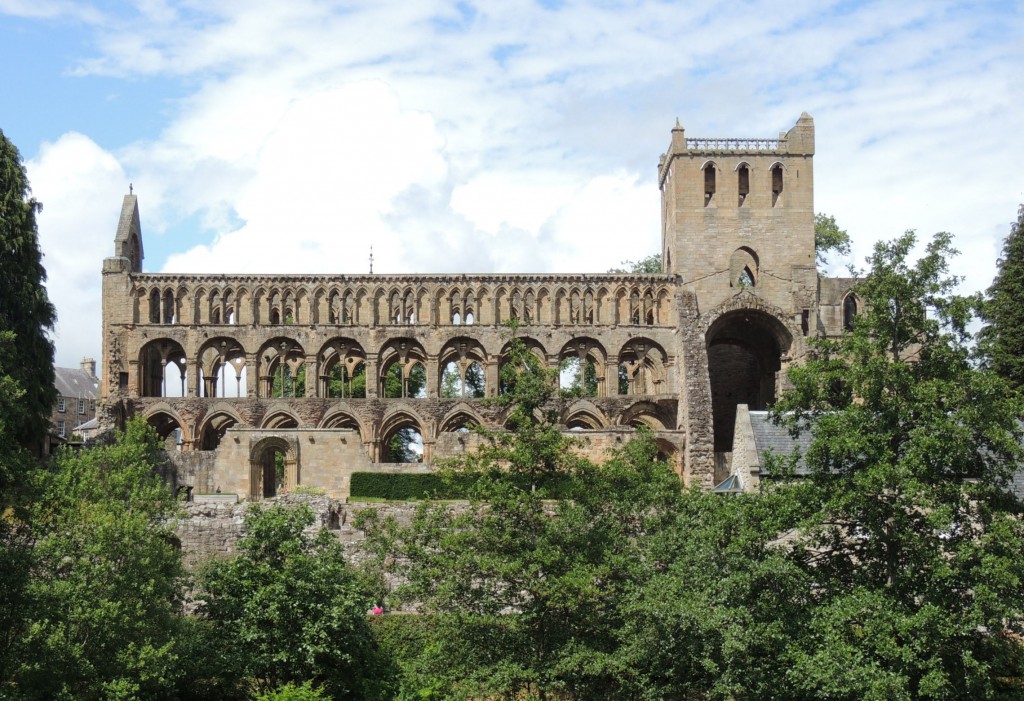 It was time for lunch, so we chanced out arm at the first place we could find, the Abbey Bridge Tollhouse. We had arrived about 15 minutes before they stopped serving lunch, and with nobody else in the cafe, I think we caused them a few problems. The soup was delivered in large cyclist-sized portions though Colette’s was a bit cold for her liking, even after being sent back to be warmed up. I enjoyed my haggis and cheese baked potato; basic fare but tasty and filling and just what I needed. The waitress coped very well with the unexpected crowd, even though she seemed less than enthusiastic about our sudden arrival just before the end of her shift!

The sun was shining as we left the abbey behind, which incidentally was established in 1138 by the Augustininan order. We followed a slightly strange detour through a park, alongside the Jed Water with impressive cliffs on the far side. The detour was strange in that it left us with a tricky crossing of the A68 to make, but once we got over, we were into quiet contry roads again. At first, the road ran through a dark and humid gorge and presented us with the steepest climb of the day. However it was just a brief one, and as it flattened off, we emerged into warm sunshine again and benign gradients then followed for quite a while.

We passed through the pleasant village of Ancrum. Being summer holidays, there were kids out playing, and I noticed one boy hop onto his scooter and make haste after spying an ice cream van entering the village. I remember the excitement well myself!

As we pressed on, we were all aware of one more significant climb before getting back to Melrose. I had done this ride before but couldn’t remember when it started. But after we crossed over a crossroads and paused at the layby just beyond, it all came back. It was a good memory though, as it was a long, gentle climb. I hung back with Colette, who wanted to take it slowly, and also Stephen who was taking it gently due to a gearing problem. It was a lovely climb and came out close to a picturesque pond surrounded by woods, which we would probably have investigated had we not seen the others waiting for us up ahead.

The group all gathered together at the top of the climb, with the Eildons suddenly coming back into view surprisingly close to our right. From there it was a case of hang on tight as we descended quickly right back into the middle of Melrose.

At this point, we had ice cream on our minds, as we knew there was a shop on the corner opposite the abbey. We headed there and put in our orders. There was a family there who had seen us go past in Ancrum and were impressed we’d made it to Melrose so quickly. The kids were also getting ice cream and I wonder if they’d missed the ice cream van earlier, or maybe they just preferred the stuff you can get in Melrose. After trying mine, I’m convinced it must be the latter! Delicious!!! Our renowned ice cream lover Willie couldn’t resist the maximum three scoop offering, and in recognition of this, shall henceforth be known as “Tri-scoopium”. 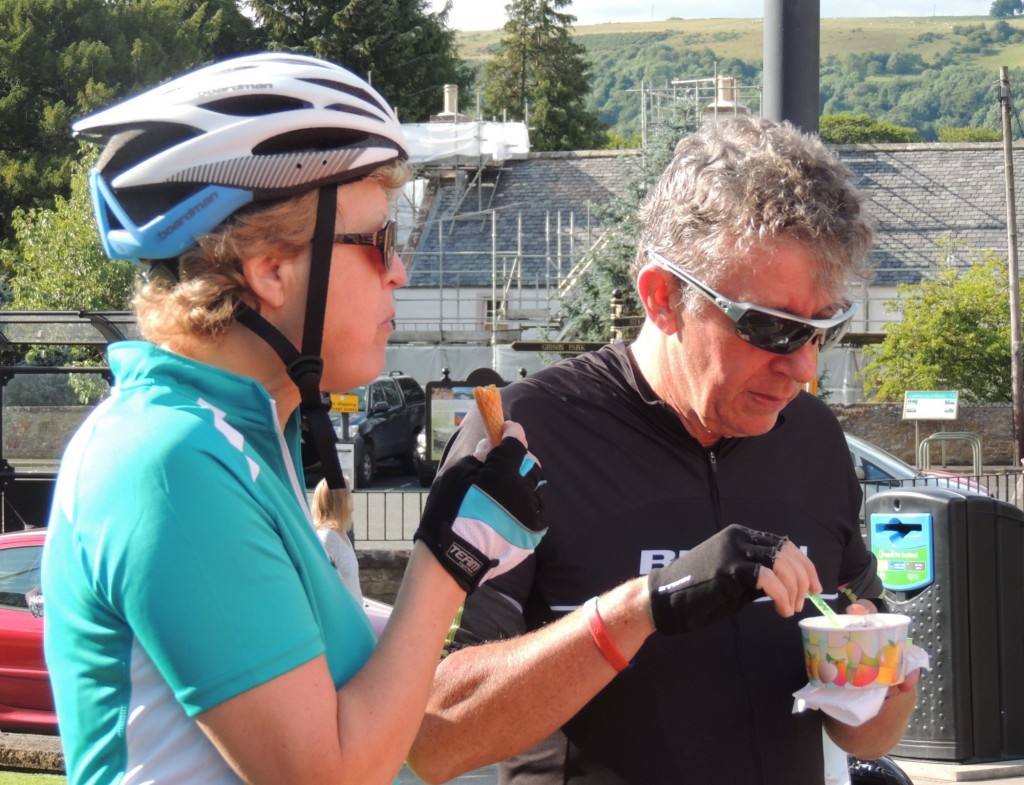 Enjoying the reward after a great day’s cycling

After the ice cream was finished, we said our goodbyes and went our separate ways, all of us delighted at a great day’s cycling. It’s no wonder this route is so popular.