This March, proper spring-like days have been a rarity, so with low(ish) winds and full sunshine forecast for this day, we decided to make the most of it. With a number of possible routes on the to-do list, we decided to try this one… a trip south in the Borders via Fountainbridge and Clovenfords, then over to Innerleithen and back home through the Granites. About 40-odd miles I thought.

The sun that we woke to had sadly disappeared by the time we set off along the A7. I was riding my heavy Crosstrail hybrid that has recently been given a new lease of life. Firstly, I changed the tyres to a pair of fast but comfy Vittoria Voyager Hypers that I got from Planet X at a bargain price. Then I took off the pannier rack and mudguards, and replaced the heavy suspension fork with a much lighter rigid one. As a result, the bike was about 3 kilos lighter and a lot more fun to ride!

A couple of cars tried to spoil the fun by passing too close but we weren’t going to let that get in the way of a nice day out. Even the drizzly rain that engulfed us as we approached Heriot didn’t seem to bother us much, and thankfully it was all but gone by the time we took the turnoff down the minor road from Heriot towards Fountainbridge.

One odd thing I noticed was that the centre of the road was dry, whilst the tarmac on either side remained wet after the rain. As the road is very quiet, I was able to ride down the middle to minimise the spay kicking up off the back wheel. Maybe I was a bit premature taking the mudguards off so early in the year, but I can live with it. 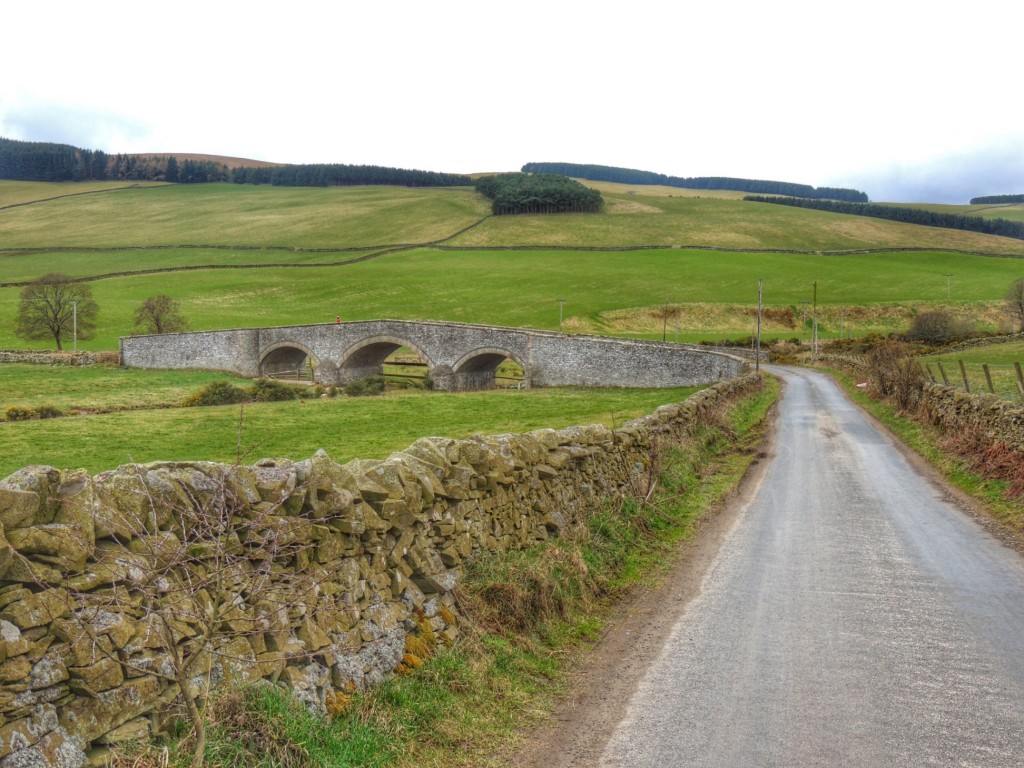 Once we had passed through Fountainbridge and got to Stow, the part of the road continuing on to Clovenfords was new to Colette and I had only gone down it once myself. Going that way, the rolling Borders countryside continued. We passed over a picturesque bridge then started to climb a hill. After a while though, there was a fork in the road, with a choice between more climbing to the right or a short cut to the left. The previous time I had been along this road with the Lothian Cyclists we went for the climbing option, so in the spirit of exploration we went left. 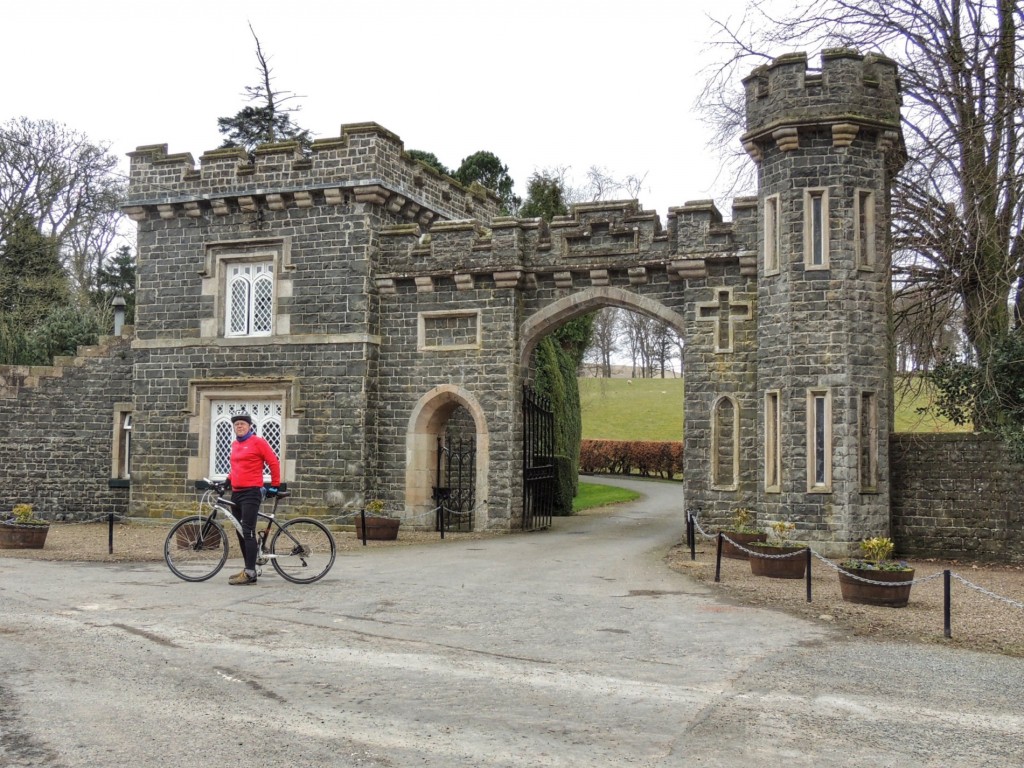 A fast descent took us to Bowland and the castellated gatehouse of Bowland House. Here we met the B710, which took us up, up, up, then down, down, down to the village of Clovenfords. We continued on the B710 for a short while after Clovenfords, as it took us down towards the River Tweed. Turning right, we cycled along the main road to Innerleithen for less than a mile before we turned off left and met up with a minor road which did the same job as the A707 on the other side of the river, except with much less traffic and much more in the way of undulations.

As we approached Innerleithen, we became aware of a strong headwind which made progress a bit harder, but I was secretly hoping that it would come to our aid on our way back. We were riding along national cycle route no 1 at this point, so we simply followed the signs which took us over a footbridge and round the houses to bring us out at Innerleithen’s main street (Peebles Road), just a stone’s throw away from the Whistle Stop cafe.

Colette announced that she was ravenous, so the cafe stop was very welcome, if not essential. We had a pot of tea and ordered a beefburger each, with the intention of having a cake also afterwards. The burgers were home made and much bigger and better than we had expected. In fact, we were so full that we decided to pass on cake, and instead went to Adam’s the bakers for our favourite of their specialities, which Colette stowed carefully in her saddlebag, to be devoured once we got home.

Then it was “simply” a case of going back over the Granites to cover the final 17 miles to home. Things were looking up, as the sun finally came out, warming our backs as we headed out of Innerleithen towards the golf course. Things then started to look a bit iffy, as we came across a Road Closed sign in the road at the top end of the golf course. 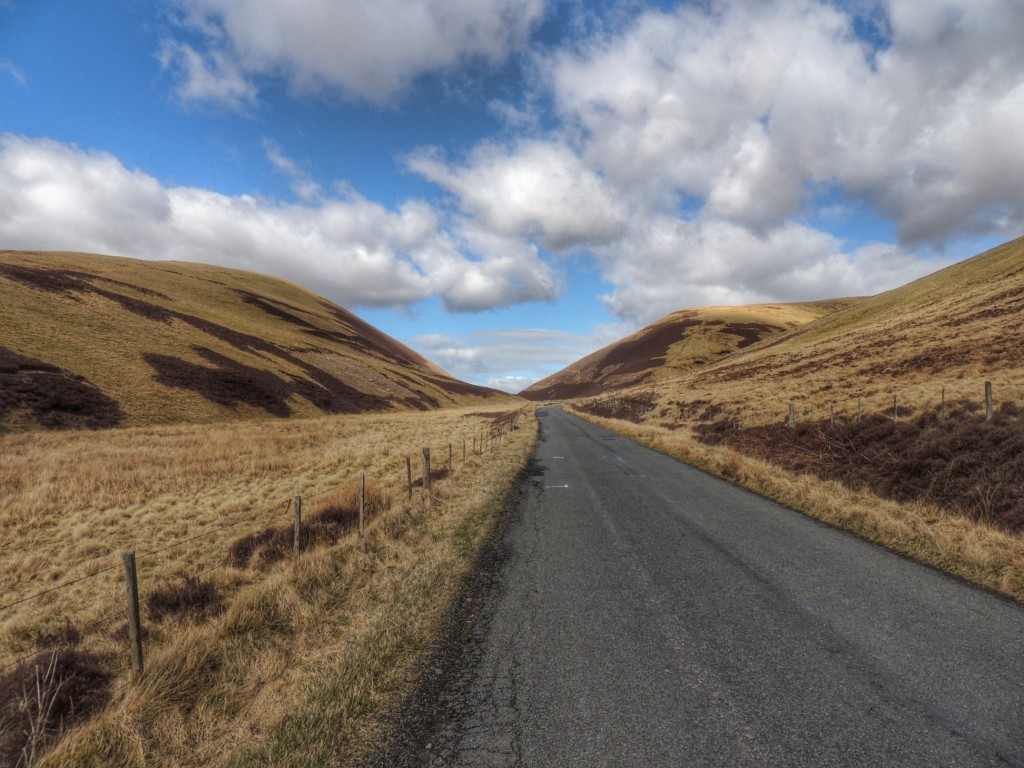 Glorious sunshine at last, as we went over the Granites.

Turning around and going back on the A7 was not something I was willing to contemplate! If necessary, we would have lifted our bikes over a fence and made a detour through the heather if we had come across a properly closed-off section of road. However, it turned out that the pothole filling and road patching work had been temporarily halted, with the machinery lying idle at the side of the road. All of this was a good thing, as there were a lot fewer cars on the road than normal, and the ride up the first long climb was a joy, with the sun on the hills and the wind at our backs.

The only negative aspect was Colette suffering from a sore neck. Maybe something to do with her riding position, which we are trying to figure out. Anyway, we just took it slow and steady to the top of the second hill, before shooting down the other side at over 30 mph.

At the end of the ride, we decided to avoid the A7 and instead finished up going via the quarry at Middleton, where an effort has been made recently to keep the road clear of mud. Trouble was, the wind which had been at our backs for some time was now a crosswind and made coming down the steep quarry hill quite a disturbing experience!

Soon we were back home, kettle on and munching into our treat from the Innerleithen bakers.