This ride definitely conforms to our “elsewhere” category, being one of our days out while on holiday in Spain. The bad weather towards the end of last year spurred us to book some flights for us and our bikes to Alicante. Late Feb / early March was the best time for Elliot and Jenna who came to stay while we were away and looked after the animals.

We then had to choose a place to stay. Looking at the map on the Booking.com site showed self catering appartments in Agost, which appeared ideally located for accessing the mountainous area to the NW of Alicante as well as being close enough to reach the coast itself if we wished. As we expected, the town itself is not at all geared up for tourism, but we were pleased to see so many cyclists passing through as we arrived, so it must be a good cycling area. In fact, as we left to pick up some supplies from the local shops on our first day, we found the roads lined with crowds for a big local cycle race that was finishing in the town centre! 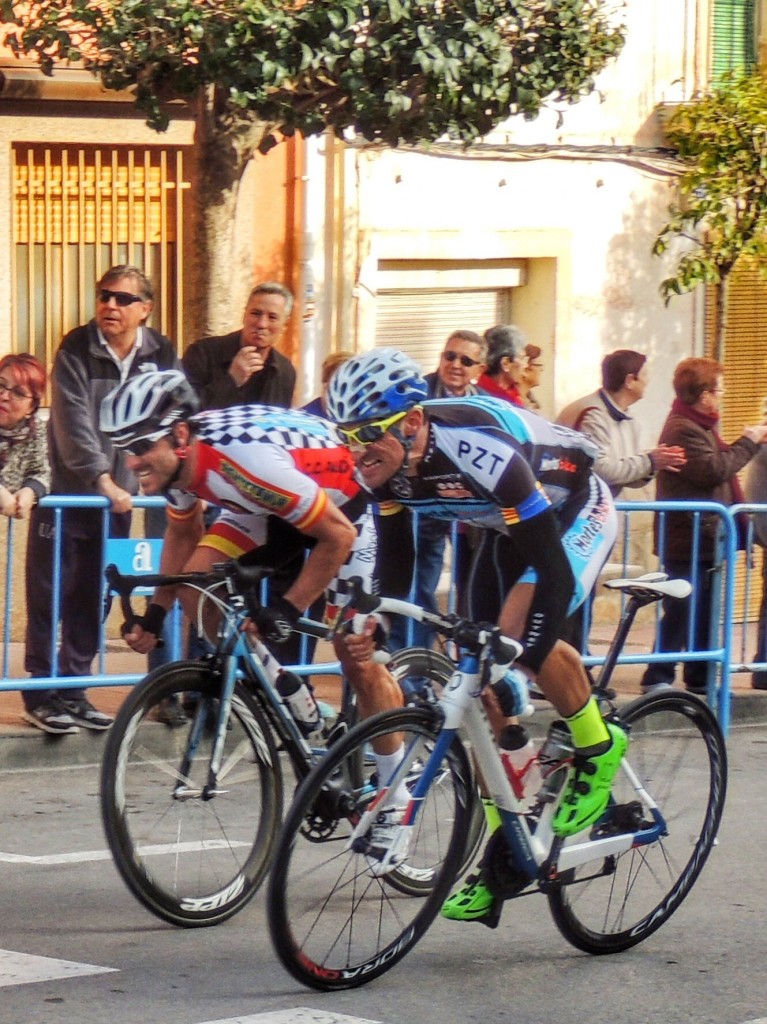 Sprinting for the line!

In planning some possible routes in advance, there appeared to be a tempting road leading from Castalla over the hills and descending towards the town of Petrer/Elda on the other side. On further inspection, the climb to the highest point, Xorret del Cati, had been used as the final climb in stages of the Vuelta on a number of years, and is infamous for being horribly steep. It was so close that we just had to try it, even though we had no idea whether we would be able to make it to the top!

So on the Thursday morning of our stay, we set off to reach the starting point of the climb. Agost sits at about 1000 ft elevation, but the Xorret del Cati climb starts at around 2100 ft. There are two main ways of getting up there: either by a twisty road or by a longer but less steep off-road cycle track known as a “Via Verde”, built on the bed of an old rail line running from Agost to Alcoy in the mountains. I thought the latter might be the best way of conserving our energies before the big climb, so we set off on a minor road out of Agost, past fields of garlic and artichokes, and intercepted the Via Verde at about Km 15. That cut out a lot of meandering through the countryside and took us to the start of the “tunnely” part.

The first thing you notice about the Via Verde is the surface. It’s like hard-packed dirt with a covering of marble-sized gravel: not the easiest surface to ride on if you have a road bike (mountain bikes would be more appropriate) and Colette grew to hate it!

The other thing about the Via Verde is the tunnels. When we explored the route first, a few days previously, I had forgotten to pack our lights. So we walked through slowly by the light of a small LED on our emergency phone charger battery pack thingy. Our bike lights were somewhat better, especially if you remembered to take your sunglasses off when entering the tunnel!

After 5 or 6 tunnels, we then went past a cafe/restaurant which I had high hopes for when planning the route, but which was closed each time we went past. The maintained section of the Via Verde then ended shortly after that at Maigmo. Several roads converge here, including the one from Agost that we avoided (but did try the day after and was actually quite a fast climb), another cyclist-friendly road from Alicante, a very busy highway (the A-7) leading off into the direction of Alcoy, and a lovely quiet road to Castalla.

Our route took us towards Castalla before we turned left and along a fairly rough joining road that quite soon brought us out at the Castalla – Petrer road. This was also right at the start of the long-awaited / feared climb. To the right there was a line painted across the road, signifying the start of the climb, so we went down a few yards to cross that before turning and heading up the climb proper.

The climb started gently enough, but I noticed that I was slowly pulling away from Colette. We had pre-arranged that we would tackle the climb at our own speed and that if I could stay upright, I’d go all the way to the top in one go. But if I had to stop for any reason, then I’d wait for Colette to catch up.

Pretty soon, the first bit of real steepness appeared, a 15% ramp, which had me down to my lowest gear. The plan from this point on was just survival – grinding my way up expending the minimum effort to keep moving. This worked well for quite a while, to nearly halfway up in fact. But then came the first of the 22% ramps, and I was really struggling. I got over it with my heart pounding, gasping for breath, when I saw the road open up ahead looking just as steep. I thought I could possibly carry on to the top of what I could see, but that would require such a Herculean effort that I would probably be done in afterwards. So reluctantly, I stopped and got off my bike.

This gave me a chance to look around properly. Through the pine trees that line the road there was a great view over to Castalla and its castle sitting proud from the rest of the town. I stripped down to short sleeves and had a drink and snack while waiting for Colette to catch up. This did take a while, because she had already stopped to catch her breath lower down, but I was very impressed to see her riding as she came into view. Then she hit the 22% ramp and had to get off and walk. 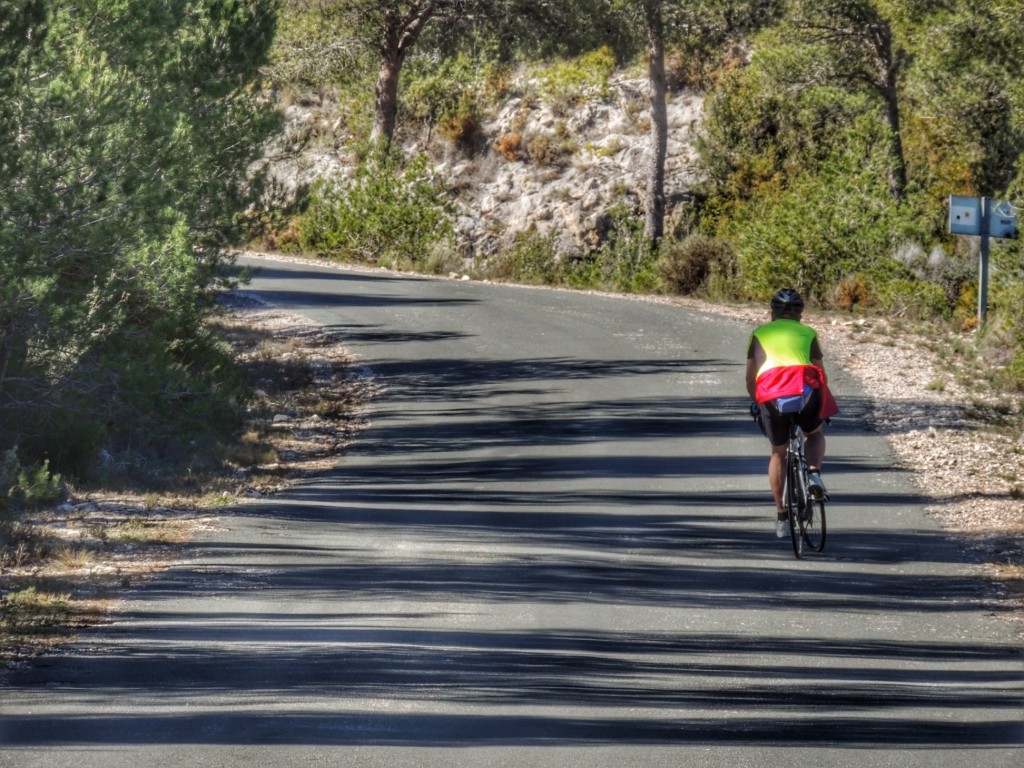 Xorret del Cati – setting off again after a break

After a while, we got going again and I found my legs were feeling fine, until I hit another of the really steep parts. So I pushed up for about 50-100 yards before getting back on again. That really helped the legs and after getting past the last of the crazy steep bits, I was able to continue without stopping to the top of the climb. Time for a big smile and great sense of achievement, and some photos of course once Colette joined me. 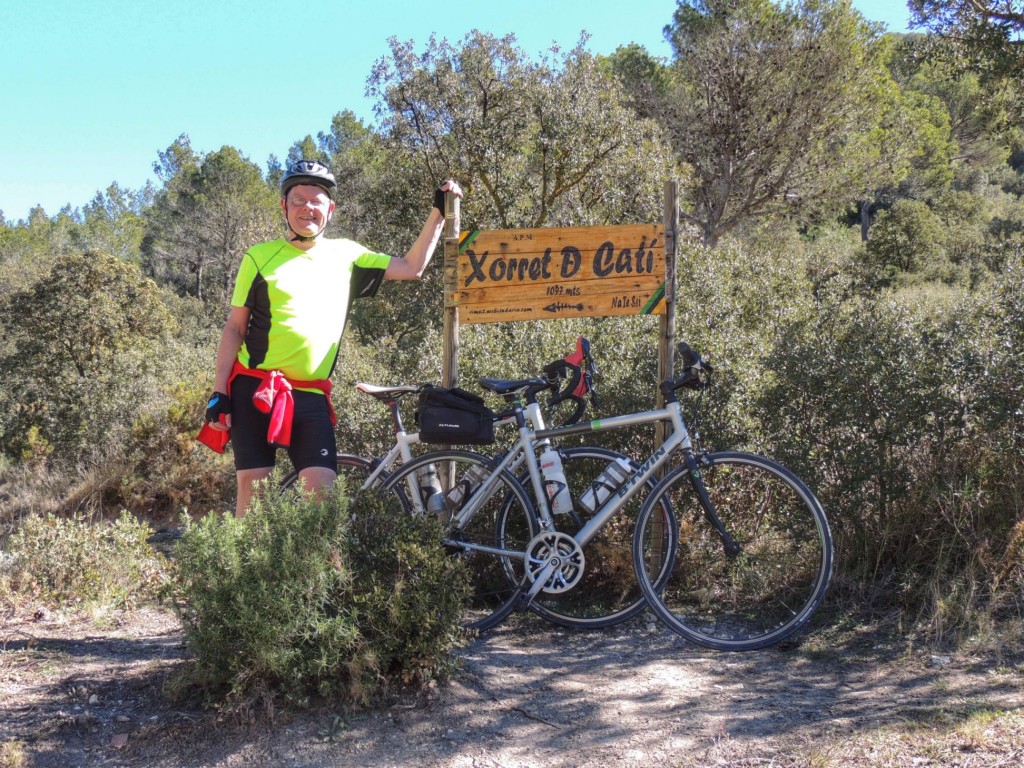 Made it to the top!

A few stats: the climb is 2.4 miles long (4 km) rising to a height of about 3600 ft (1097 metres) with 1471 ft of ascent, making the gradient an average of 11% (with a maximum of 22%). So it isn’t particularly long but the fact that the gradient is so consistently steep makes it challenging even for the pros. Our aim, of course, was just to enjoy it at a leisurely pace, and in that, I think we can say we succeeded!

Next stop was to be the Hotel Xorret de Cati, where we thought there might be an outside chance of refreshments, and where we wanted to see the statue erected to Jose Maria Jimenez, who won the first race up the mountain in 1998. The descent towards the hotel was frighteningly fast, and it was all I could do to keep the speed down to a manageable level with the brakes. So we were very soon stood in front of the statue taking photos. The hotel however looked shut up, which to be honest was as much as we expected. 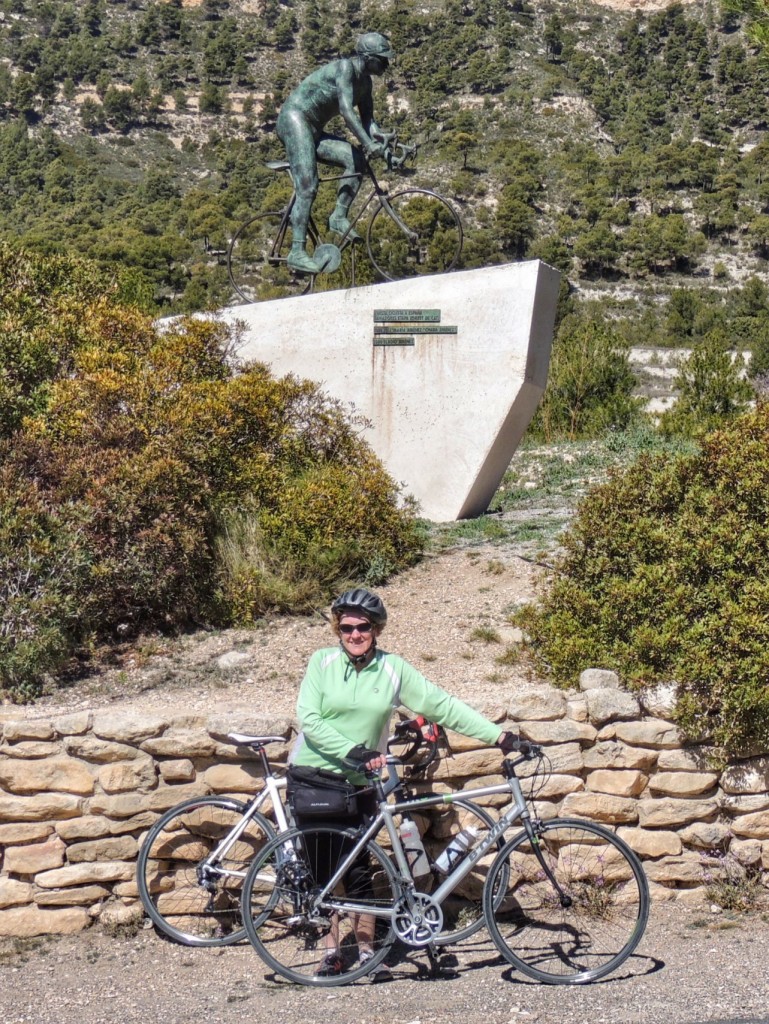 The following 8 miles or so down to Petrer I had envisaged to be a fairly uniform gradual downhill, but that did not turn out to be the case. There were more steep descents and a few steep ascents to negotiate. The scenery was more interesting and varied than the other side, with a number of twists and turns, quite often leading you into the teeth of an unexpected howling headwind. The final stretch into Petrer was quite fast however, taking us to a junction leading under the busy A-31. 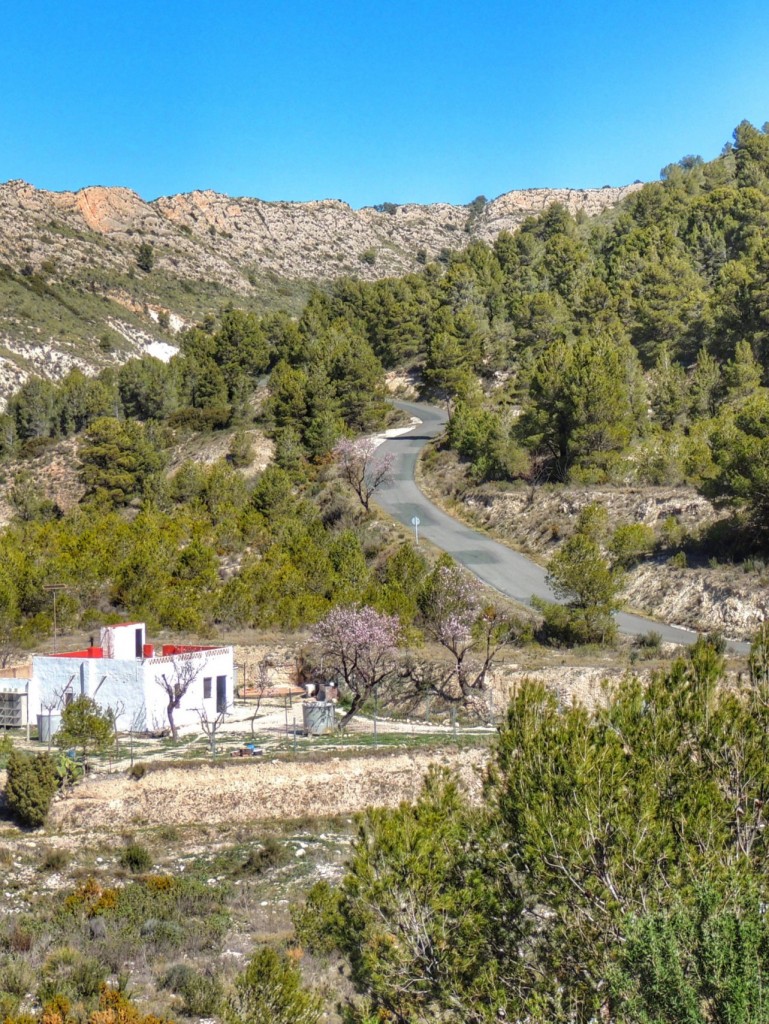 The descent from Xorret del Cati was steep in places!

With a few stops to consult the map, we made it to the Avenida Don Jose Martinez Gonzalez where the towns of Petrer and Elda seem to merge seamlessly and where I was looking for a particular restaurant to stop for lunch. I didn’t see it though, and since we were hungry and there were so many to choose from, we just stopped and went to the closest.

It was a little wine bar which served us up a selection of tapas and some sweet coffees for energy. After that, we left through Petrer following a route back to Agost that I had pre-planned with the aid of the computer while at home, and was designed to keep us on quiet back roads.

Leaving Petrer behind, we entered an area of small farms; quiet and rural. The road wound its way gently through until the tarmac stopped abruptly. I checked the route, and we were to follow a dirt track for a small way before reaching tarmac again. The path had the look of a washed out river bed so we dismounted and pushed the bikes carefully down a steep slope to the bottom of a small valley before riding up the other side. Then sure enough, just as abruptly as it had stopped, the tarmac started again. This took us uphill till we were cycling alongside a fenced-off residential area with a guarded entry point. A loud alarm was ringing on the wall of a large detached house, watched over by some neighbours from the other side of the street.

The alarm gradually faded into the background as we cycled onwards into countryside and back into hill farming area again. The road got a little rough in places here, with what was apparently mud left by tractors baking into concrete in the sun, and forming random speed humps. Soon, we were into some gradual but consistent downhill, where we let the speed build up for a fun descent.

That took us to a T-junction, with the road running parallel to a major train line. We went left and followed the road for a couple of miles till it took a right under the tracks. There were four train lines, all with their own bridge, amounting to quite a major bit of engineering. This short road ended in a crossroads with the fairly busy Novelda – Agost road. We had ridden along that previously, but although the traffic was courteous, it was still going quickly and the trucks were big and noisy, so we took an alternative way back along quiet roads.

We were cycling along a relatively flat plain about 5 or 6 miles northwest of Alicante through extensive vineyards. On either side of the road, the vines were neatly pruned in regimented rows running for many hundreds of yards, some of which were completely covered in protective netting like vast, low warehouses. It was too early in the year to see any greenery on the vines, far less grapes, although many trees were in blossom and elsewhere, we saw oranges and lemons on citrus trees.

After a while, we reached a left turn for Agost and crossed an absurdly steep bridge over the railway before finally arriving at our temporary home in the small town of Agost. It had been an epic day out, and I was so glad that there was cold beer in the fridge!