We arrived in Aberfoyle at about 10 am, half an hour early for today’s outing with the Lothian Cyclists, having allowed extra time to negotiate the Edinburgh bypass, which actually turned out to be very quiet. It must have been due to the school holidays, but it gave us and a few other early arrivers time for a quick cuppa at Liz MacGregor’s tea room. We wondered about the weather forecast for the day ahead, which was for showers, although it was fine when we arrived.

Soon enough, everyone else appeared and we were ready for the off. After a couple of spins round the car park, we set off up the Duke’s Pass and were straight into some fairly steep gradient. I was a bit worried that my sore knee would come back to spoil the ride, so I was taking no chances and rode up in the lowest gear possible. Luckily I had altered my road bike to make this possible, so the climb wasn’t really all that taxing, apart from the fact that it kept on going for over two miles. By that time I was ready for a rest, catching up with the quicker ones at the high point. Some carelessly discarded energy gel wrappers at the side of the road showed that we weren’t the first cyclists to stop there. I put them into my pocket to transport to the next litter bin – they don’t exactly weigh a lot after all.

We then set off downhill, with a good three miles of freewheeling ahead. Halfway down, the first of the showers started and I contemplated stopping to put on my rain jacket, but decided to keep going. The road wasn’t wet enough to make it slippy, but still I needed a lot of concentration to stay on the right line round the bends.

After passing close to Loch Achray, we stopped at the left turn to Loch Katrine for the group to come together again, then continued forward into the Trossachs as far as Loch Katrine where the public road ends at the steamboat pier. There is a private road running round the loch, where bikes are allowed, and that is what we followed for the next section of the ride. The rain abated and the sun came out as we rode along the side of Loch Katrine, with beautiful new views to be enjoyed around every corner. 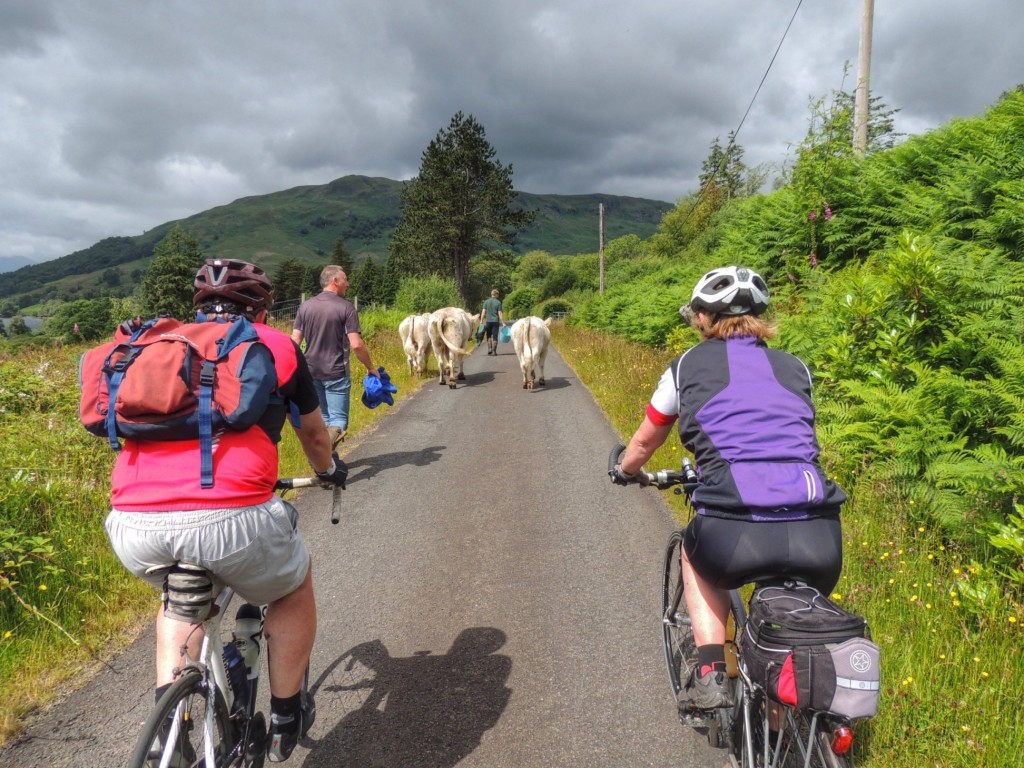 What passes for traffic at Loch Katrine!

The first few miles were reasonably flat, but later there were a few steep hills; nothing daunting, just short and sweet. There were one or two short showers along the way, making us wonder how long it would take to get to our lunch stop at Stronachlachar. In fact, we spotted it quite early on the other side of the loch, but it took a while to get all the way round. As we were getting close, a particularly heavy shower began. The rain made the deer grids (like a cattle grid but longer) slippy and I had a scary moment when my back wheel started to skid out from under me when going across the last one at speed. No wonder the signs tell cyclists to go through the gate instead! 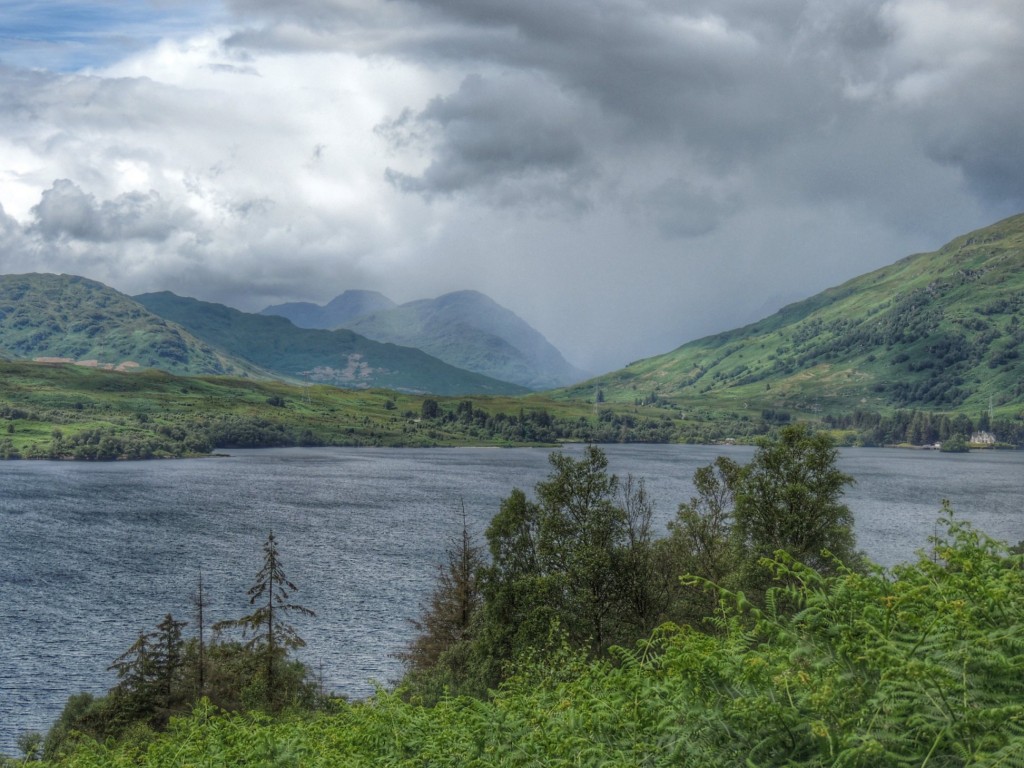 Dramatic scenery and a shower coming our way…

We then arrived at the pier, where a lovely cafe is situated, ready to serve boatloads of tourists who have sailed up the loch from the “port” at the other end. For a place with limited competition, we were glad to find the food reasonably priced, as well as reasonably tasty. After my big beefburger and chips it took some effort to get up and contemplate getting back into the saddle. As we assembled outside the cafe and got ourselves ready for the off in the bright sunshine, we were at the same time getting wet in a heavy shower. Typical Scottish weather – if the Trossachs isn’t the official home of the sunshower, then it really should be! 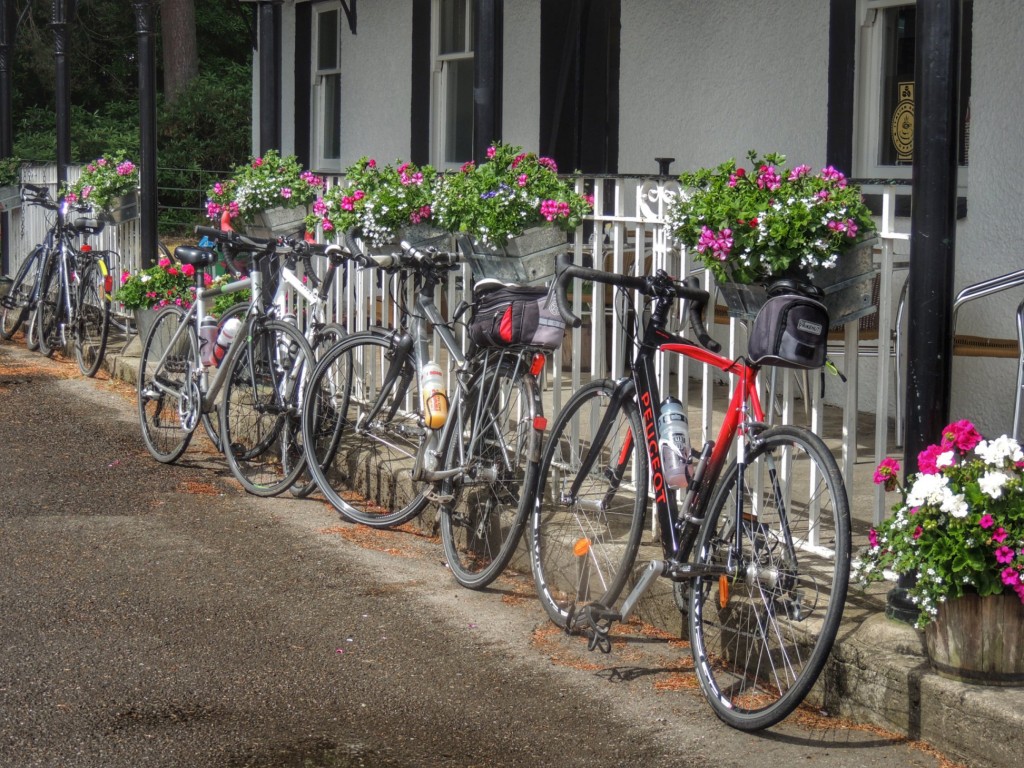 A stiff climb took us away from Loch Katrine, then we turned left and started a long undulating descent towards Aberfoyle with Loch Arklet initially to our right. After that, we entered the Loch Ard Forest where we sheltered beneath some trees for a few minutes during a brief cloudburst. The midges were also hiding beneath the same tree and seemed to focus their attentions on Fiona. That was the cue to get going again and leave the wee beasties behind.

I followed our progress by the old fashioned milestones at the side of the road, counting the miles down to Aberfoyle, starting at twelve. We rode past Loch Chon and later Loch Ard where the scenery just kept on giving. The final run-in to Aberfoyle was quite rapid and before long we were back where we started, with people talking about ice cream, especially as the rain was now over for the day and we were basking in warm sunshine.

The decision was made to pack away our bikes first, which Colette and I did, then went over to the other cars, where Norah had run into a small problem. She had laid her keys down inside her car, where they had spontaneously locked her out. Something to do with a dodgy remote locking device. She managed to find a couple of friendly coach drivers to give her a hand to break into the car. They worked away with bits of wire, but after a while, as this was looking like it might not work, she went in search of the police station. All that was left of the police station was a telephone line to connect her to another one some miles away. That phone call told her just to call the AA, which she might have if she had been a member.

Meanwhile, the interpid bus drivers carried on. We went and got ice cream, and the bus drivers were fed ice cream and we ate and chatted and composed limericks about the situation . Then finally the sound of a car alarm heralded a successful forced entry into Norah’s car. Well done those guys!