03 May 2014 – Peebles and Innerleithen via the Meldons

With some DIY duties lined up for this afternoon and the next day, and having missed out on some cycling opportunities already this week due to gardening, it was imperative to make the most of this morning. The forecast was for sunny intervals and there wasn’t a breath of wind in the air, so we decided on a trip to Peebles, taking in the Meldons on the way.

We headed out in the direction of Gladhouse Reservior, and quickly noticed that it was quite a bit cooler than we expected, and that the sun wasn’t actually managing to break through the clouds. This meant that we were relying on hill climbing to warm us up a bit. Luckily, there were quite a few on our chosen route!

From Gladhouse, we continued in the direction of Portmore Reservoir and after passing that, we went down the hill to Waterheads, where the road meets the Penicuik to Peebles main road.

We turned left onto the main road and cycled on a few miles till we reached Eddleston, where we turned right onto the Meldons road. It was a bit of a relief to leave the main road behind, even though the traffic wasn’t all that busy. In fact, quite a large proportion of the cars were carrying mountain bikes, presumably bound for the Glentress mountain bike centre.

Our route took us gently uphill into some territory that was new to us. There were some lovely vistas, but it wasn’t the best of days to capture them in a photo, due to the rather overcast nature of the day. Despite this, we stopped to take in one particularly fine view, where we met some very photogenic sheep. 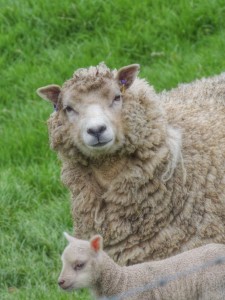 As we passed through the highest point, I noticed that Colette was no longer with me, having stopped some way back to try some more photos of the scenery. I paused too, waiting for her return, when I was sure I could hear the sound of what seemed like distant jungle drums. When Colette caught up and we set off again, I wondered what was in store round the corner. 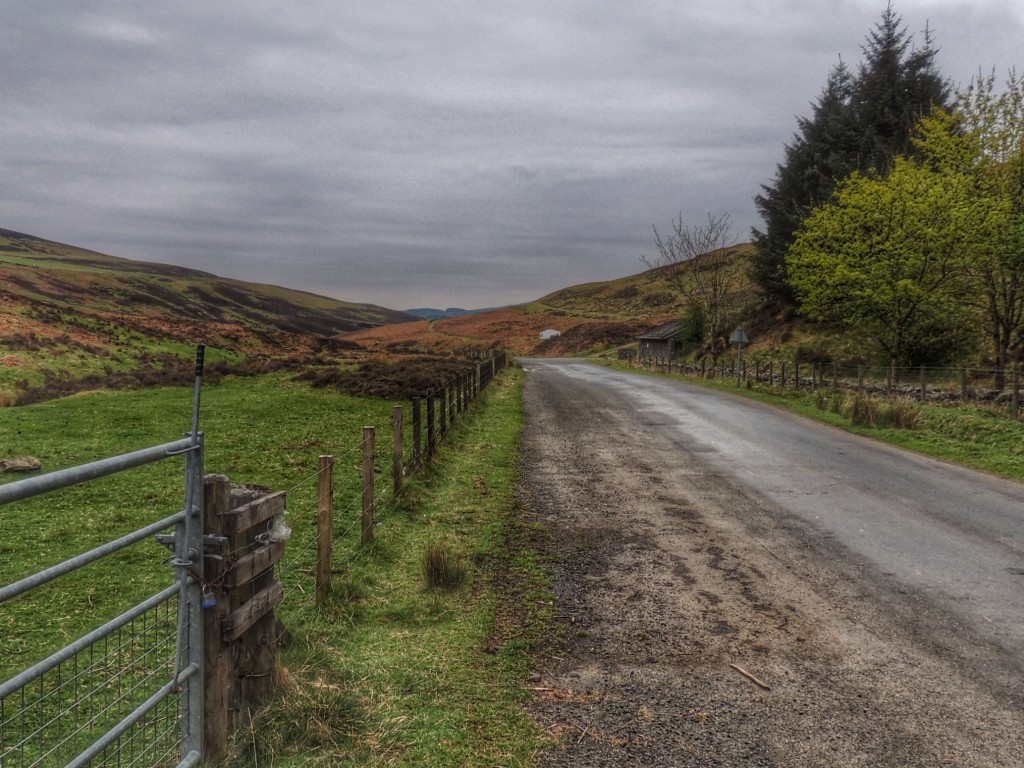 The Meldons on an overcast day. That white speck in the middle was emitting some thumping beats

As it happened, the first thing that I noticed was a cattle grid, which I went over a little too fast, bumping me so hard that one of my water bottles flew out of its holder and skidded across the road. When I stopped to pick it up, I could hear some loud rave music, which was coming from a small marquee some way up the hill on the right. Was there a rave in progress at about 10.30am on a Saturday morning? There was just one car parked next to the marquee and nobody to be seen other than a middle aged man in a wooly hat who emerged from the tent as we passed. Strange…

Along this part of the road, there were quite a few places to park and set up camp, and a caravaning family reminded me of the Granites during the summer, when families from Midlothian decamp to spend time in the countryside. The Meldons must be Peebles’ version of that.

The picturesque (on a good day!) Meldons road came to an end all too quickly, turning us out onto the A72, where we went left and headed in the direction of Peebles. A mile or so later, catching sight of Neidpath Castle, we just had to stop and take a photo. It has a wonderful location, overlooking the River Tweed from its lofty vantage point. We decided to take a closer look, but the gate was locked, due to a wedding being held that day. 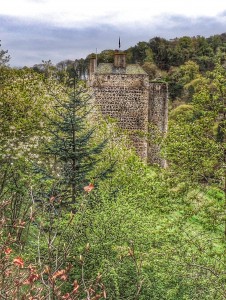 Neidpath Castle as spied from the A72

Arriving in Peebles, we made a slight excursion over the bridge to use the facilities, then headed back through the town going in the direction of Innerleithen. After passing Peebles Hydro, we took the next left, leading up to a newish cycle path. This takes the general route of the old Tweed railway, being mostly flat and very smooth, making for some fairly rapid progress. At one point, the path goes down through a tunnel, and when you’re halfway through, all you can see is the light at the other end, not the path beneath your wheels. Quite an odd feeling, especially if you are going quite fast!

The path continued through Cardrona; the countryside between there and Innerleithen was like Scotland on a calendar, with golfers golfing to the left and anglers salmon fishing in the Tweed on the right. We pulled in to Innerleithen at what looked like an old station, then got back out onto the road, stopping in town at the bakers for a selection of cakes. We then found ourself a nice bench at the waterside and ate our lunch.

The final part of the cycle trip was up through the Granites in the direction of home. We have done this quite a few times already this year, but we got our biggest scare this time, when a car overtook an oncoming van, apparently oblivious to our presence. It only just pulled back over in time to avoid wiping us out. It’s the sort of thing that can spoil your day if you let it – best to just put it out of your mind rather than dwelling on it. Still, I’d had enough of fast cars for one day, so we went home the quiet, hilly way, rather than rejoin the A7 for the last half mile or so like we normally do.