Easter Monday was set to be a sunny one, at least in the afternoon, but the rest of the week wasn’t looking so good, forecast-wise. So this was a day for fitting in a good long ride. Our previous longest was a 58 mile round trip to North Berwick, and we were dead on our feet at the end of that one. But the thing is, if we had just ridden for 4 more miles, we’d have done a total of 62, or to put it another way, we’d have hit the impressive sounding milestone of 100 kilometres.  If we were going to reach this milestone without risk of medical emergency, a few things were going to have to change compared to our previous longest ride. Firstly, we would use our road bikes, which are lighter and should be less tiring to ride. Secondly, the route (another North Berwick round trip) would take a much less hilly route overall. Thirdly, we were going to take a much longer break for lunch and eat and drink plenty during the ride, as lack of rest surely contributed to our problems last time. And finally, the ace up our sleeve: the wind was coming from an Easterly direction (quite appropriate, for Easter Monday). That meant that for our final few miles, the wind would be helping us rather than sapping our last reserves of strength.

We headed off down the A7 on a slightly misty morning, with me feeling a little chilled after deciding to leave my windproof jacket at home. The route took us through Newtongrange and into Dalkeith, where we mostly followed the cycle path to Musselburgh. After riding through the town centre and past the racecourse, we turned left at the roundabout, bringing us onto the coast road to North Berwick. We took a brief break at Longniddry Bents to share the first of four cereal bars that we’d brought along for extra energy. As we cycled along, the sun very gradually burned off the mist and it began to get warmer. However, on the more exposed areas, the headwind made its presence felt, and we slowed down quite a bit. 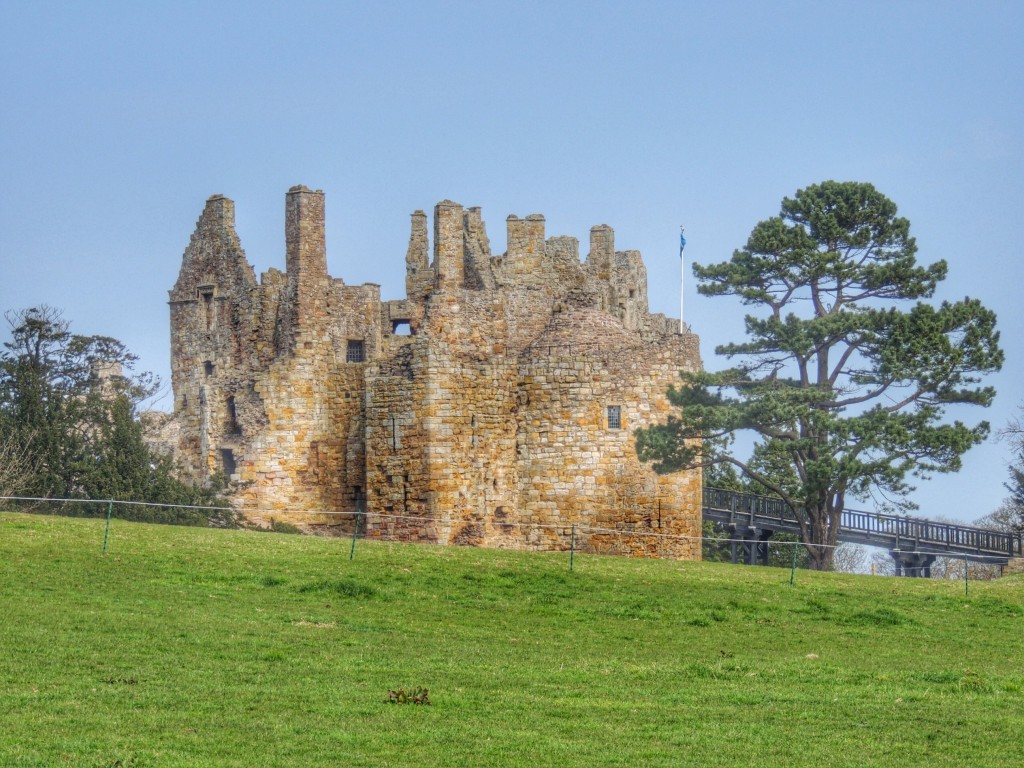 As we passed Dirleton, we paused on the verge for a quick piccie of the castle, but then found it hard to get back onto the road again for the traffic: everyone seemed to be heading to North Berwick. There were some roadworks leading into North Berwick which held us up a bit, but finally we got through them and made a bee-line for the chip shop, as it was lunchtime. Colette and I shared fish & chips, along with cups of very hot tea which took a while to cool, forcing us to take a decent long break. We sat on a wall to do that, eating our lunch in the warm sun and watching the world go by. After that we moved to the beach front, where Colette spent a while taking photos and I shivered in the cold onshore wind, finally taking refuge in a bus shelter. 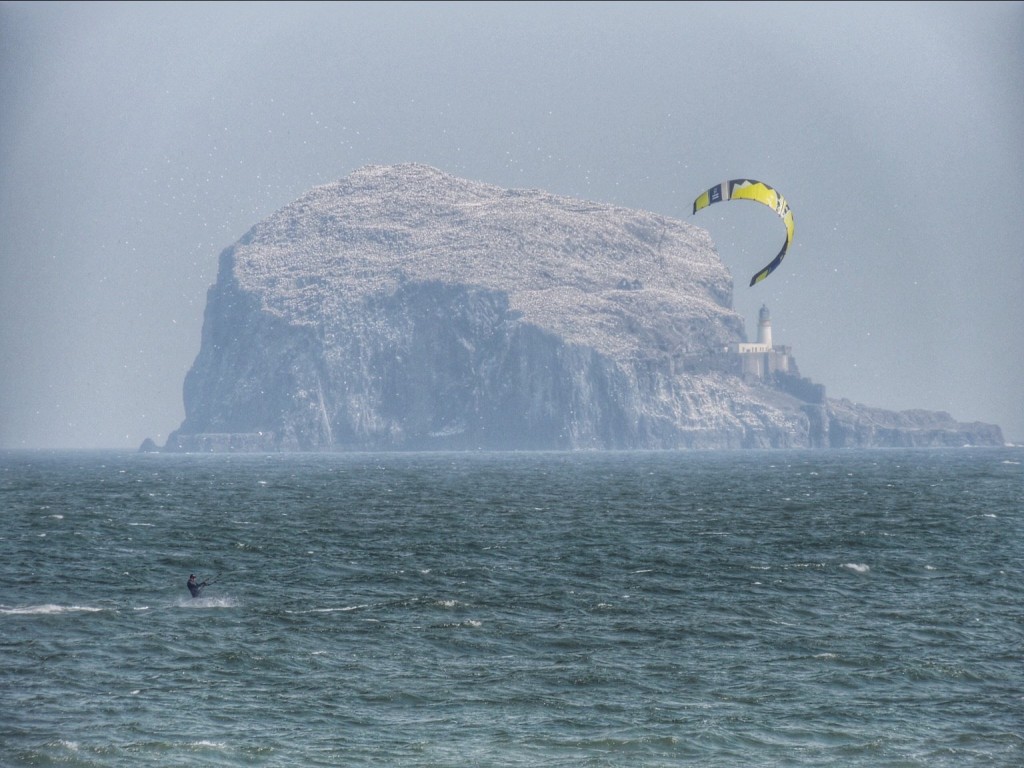 Kite surfing at North Berwick, with Bass Rock in the background

Leaving North Berwick, we followed the coast road round to Tantallon, past some spectacular scenery. We then cycled up close to Tantallon Castle get a better photo, but to get right up would have required parting with the cash for the entry fee. As I was worried about the rest of the ride, I persuaded Colette to leave it for another day and we carried on. Getting a membership for Historic Scotland would be a good idea, so we could drop in on such places for as short or as long a visit as we like, and not feel the need to get our money’s worth on the entry fee each time. Watch this space… 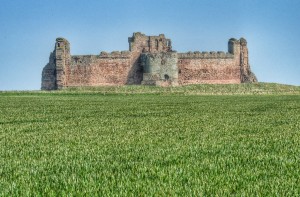 Tantallon Castle, from a distance…

Next, we followed the road away from the coast, past Whitekirk and Tyninghame, feeling the benefit of the wind behind us for the first time. We then turned west at the A199, riding along the adjoining cycle path to East Linton, where we took the cycle route headed towards Haddington. That went us past Hailes Castle, where we stopped for another break and shared another cereal bar.

We continued along quiet roads until we reached Haddington for a comfort break. Our route took us south out of Haddington, then west, passing south of Pencaitland and through West Saltoun. Here, we encountered some positive gradients which felt unfamiliar to the legs, the route having been predominantly flat up till then. We zig-zagged along a few minor roads, taking us past Windy Mains saw mill and down to the ford at Costerton, where our final cereal bar was dispatched.

It felt like the pace was slowing quite a bit as we continued towards home. However, the A68 as we approached looked very busy, so we had to keep our wits about us for the few hundred yards of main road that were needed before turning off onto the B6458 to Tynehead. A few minutes down that road, Colette said the wanted a break because her wrists were feeling sore after absorbing all the shocks from uneven road surfaces and potholes.. Taking stock of my own aches and pains, my right albow was quite weak and sore, but to be honest it was like that from just a few miles in, although gradually getting more noticeable as the ride wore on. My wrists and hands however were holding up much better than on previous long rides, possibly down to having drop bars on my road bike which lets me shift to different hand positions every now and then.

The final few miles took a bit longer than expected, due to very long waits at the roadworks traffic lights, but once onto the A7 and heading for home, the wind was at our backs again and we sped along at quite a lick. Before long, we were home with very satisfied smiles across our faces! We had a well deserved big dinner and an early bed. So early in fact, that when I was woken later by agonising cramp in my thighs, at what I thought was the middle of the night, the clock said it was just 10 past 10! Despite the aches and pains, it was well worth it, but that means we now have to start aiming at the next milestone!