We have ridden up to Portmore Reservoir before and explored some of the tracks running through the adjoining woods, but it wasn’t till recently that I looked at the map of the area closely and saw that there are the remains of a hill fort there. The aerial photography on Google maps shows some impressive rings, known as the Northshield Rings, which are earthworks associated with the fort. So we just had to wait for a dry day to go for a visit…

It was dry and sunny on our chosen day, but there was quite a strong westerly breeze. It was a real struggle cycling up past Gladhouse Reservoir straight into that wind, so we arrived at the bottom of the track to Portmore at least 15 minutes later than usual. Colette was also sporting a compression bandage for a sprained wrist and maybe shouldn’t have risked riding with it, but we hadn’t been on our bikes for quite a few days and she was willing to take the chance just to get out at last. 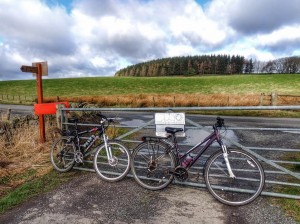 Our bikes, after lifting over the gate

We rode up the bumpy track to the reservoir then turned right, picking our way round the potholes / puddles until we came to a left turn running steeply uphill away from the main track. I forgot to bring any form of map, but in my mind it was quite simple – just carry on upwards with pine trees on the left of the track and a deciduous wood on the right, and we should get there. On a previous occasion, I think I managed to ride all the way up this hill, but this time I was struggling. The track was steep, rocky and muddy, and I gave up after a while to push instead. I looked back and Colette was doing the same. 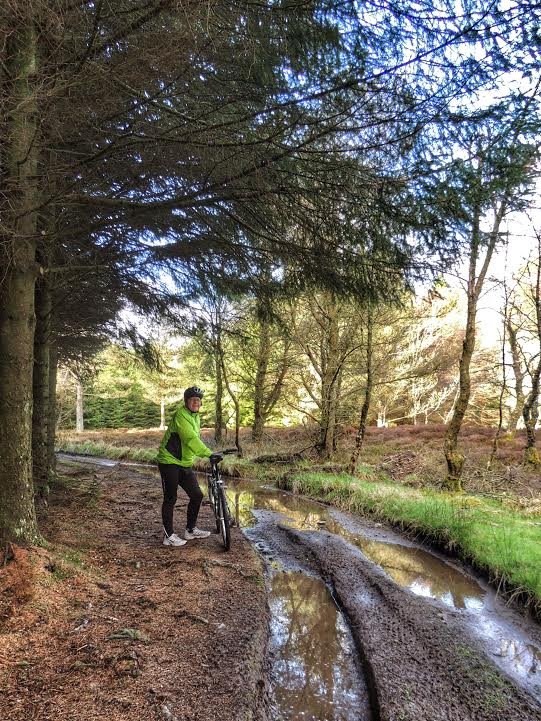 Muddy tracks – better off riding on the verge

The track then started to level off and at the top was filled all the way across by a huge puddle. The only option was to cycle across, which was luckily uneventful. At the other end of the puddle, the trees on the left gave way to open scrub and we arrived at a very muddy junction, where keeping pedalling was again the best option. For some reason, I decided to take the right fork rather than going straight on. This took us down through pine trees, which felt wrong, so we stopped after a short while and thought about going back the way. However, there was a clearing between the pines leading upwards to a birch wood. As my memory of the map was the hill fort being at the highest point, that seemed like the way to go, so we wheeled our bikes up the clearing and through the birch trees. 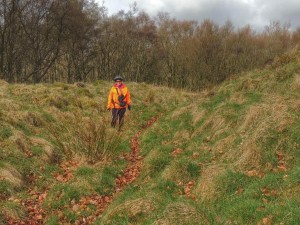 Standing in the rings

Fairly soon, the land ahead opened out again onto heather and the rings came into view. It was to be said that the rings are much more impressive from an aerial view than actually on the ground. It would be easy to mistake them for some kind of drainage works, and indeed I realised that I had done this when we went past this area last year. We walked through the ditches and over the rings till we got to the centre. It was only when we were actually in the ditches between the rings that we could properly appreciate their size, rising maybe 8 feet. The central area was a surprisingly large and could have housed quite a number of families, if indeed it was that kind of place. The heather here was scorched, which might be necessary to prevent the rings from disappearing totally into the undergrowth. 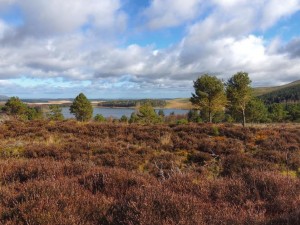 The view from Northfield Rings, out over Portmore Reservoir and beyond

I’m not sure if much is known about the age or history of the place, but it was reminiscent of White Castle fort, an iron age fort in the Lammermuirs that we paid a brief visit last year. One thing they both had in common was a terrific view.

On the far side of the rings from where we arrived was the track that we should have taken to get there. We rode round to it and began our return journey. We now had some steep downhill track to negotiate, which was quite exhilirating. I reached the bottom ahead of Colette and turned onto the main track just in time to see a Land Rover coming in my direction. The driver, apparently a gamekeeper or similar, involved with managing the estate, stopped to have a word. He warned me that they do a lot of shooting in the woods to “control” the deer, and strongly advised us not to use the tracks through the woods, including the one we I had just emerged from. I asked if there was any part of the year when it would be OK, but he said they shoot all year round. But apparently it would be OK to stick to the main track that leads down to Portmore House and the one on the other side of the reservoir, that leads to Eddleston.

I said that we had gone to see the rings; he replied that quite a lot of people do that and he can’t stop them, but basically he doesn’t like it and strongly advises people to stay out of the woods. Colette arrived and we said goodbye to the man and went on our way. He had been extremely polite about it, but I couldn’t help feeling disappointed – I’m not sure I would be happy going back even though we have the “right to roam” on our side. On the other hand, it was good to hear that the main track is still OK to use, and I can think of ways to make a nice circular route taking us round to the other side of the reservoir.

It was late morning by now, so it was time to think of heading back home for lunch. The return trip was so much quicker with the wind at our backs – we were zooming along at 20mph+ for much of the return journey!

Looking back on the day, it was great to get out there to see the Northshield Rings up close and to imagine what it might have felt like to live there all those centuries ago, but sadly, I think probably we won’t be going back.