A few weeks ago I agreed to come up with a couple of rides for the Lothian Cyclists, and this was the first of them. By some fluke of luck, I chose a day where the sun shone pretty much unobstructed from dawn till dusk. That meant that it was still quite chilly when we met up at our start point in North Middleton.

Our group of nine crossed the A7 and skirted past the limeworks on our way up to Gladhouse Reservoir. It was quite a hilly start to the day, but the sunshine, the views and the company meant that we barely noticed it. Soon we reached the reservoir, where there were a few patches of ice in the shaded sections to look out for, in addition to the view across the water. It was also slightly breezy; more than expected from the weather forecast, but not troublesome. 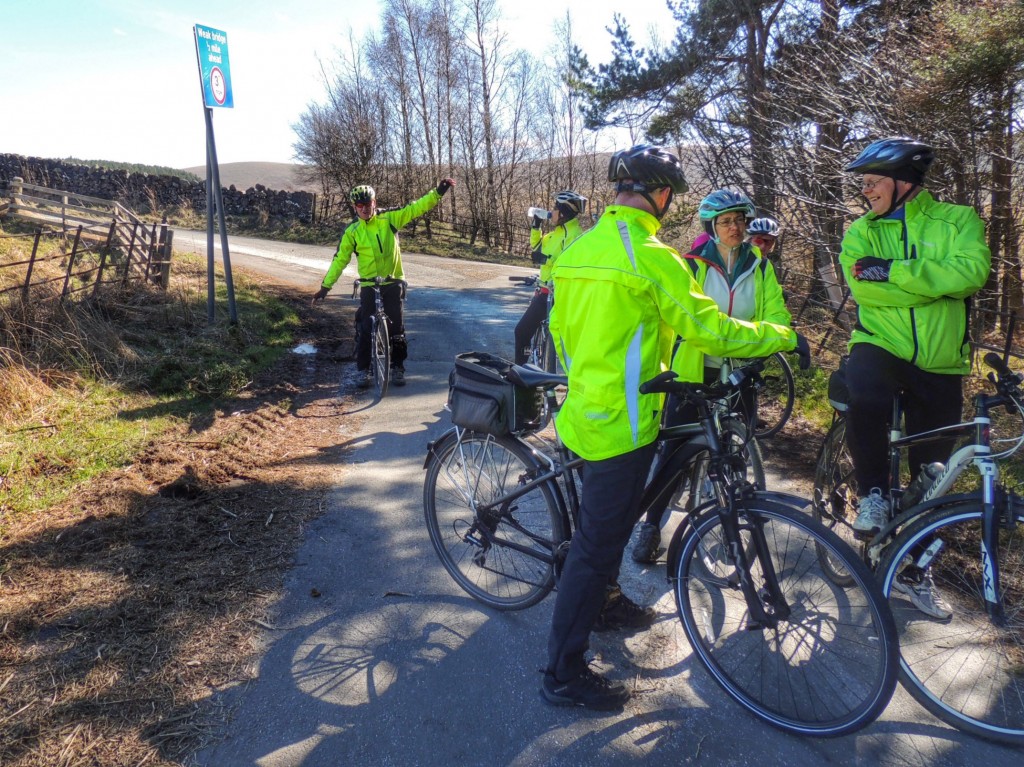 Gathering together at Gladhouse Reservoir

After the reservoir, we took the left turn and rode up as far as the layby taking us into the plantation at Toxside Moss. Here we encountered some bumpy, muddy and puddly bits, which weren’t to everyone’s liking unfortunately. Then we came to two long parallel puddles in ruts on the track. Colette called out “Don’t stop pedalling!” but a couple of the group didn’t take heed and then found out what happens if you do stop. There were some damp feet as a result, but we didn’t hear any complaints of frozen toes later on, so it could have been worse!

Some of us with the benefit of suspension forks took the opportunity to speed along the track for fun, and the rest of the group caught up at the far end of the off-road section. There we noticed a sad-looking little donkey in the field alongside. While we cooed over him, he resolutely refused to look at any of us, and did nothing save for sticking his tongue out as soon as the camera was packed away. Sad maybe, but definitely some attitude going on there! 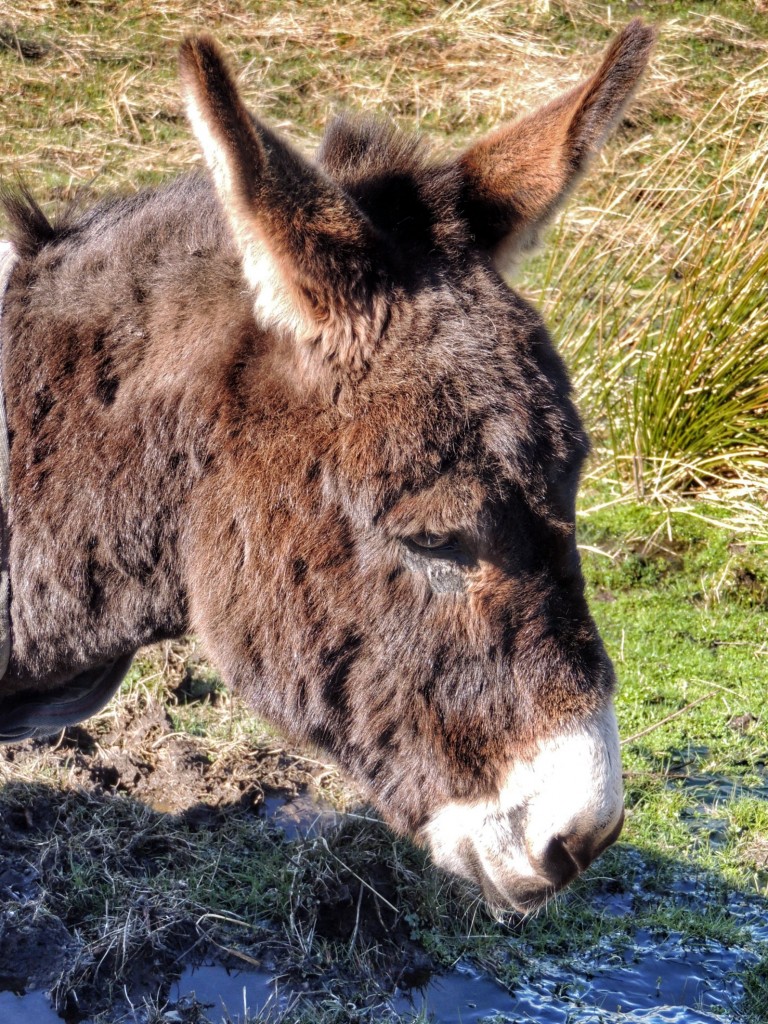 We then carried on along the road to Mount Lothian at good pace, then turned left at the crossroads going in the direction of Penicuik. The final approach to the town is via a steep and quite windy downhill section. I was pulling my brake levers full against the handlebar and realised that it was time for some new brake blocks! Thankfully there was still enough left to see me safely downhill.

Turning right onto the main road into Penicuik and across the bridge, we promptly turned right again to follow signs for the cycle route that runs along the old Penicuik to Dalkeith railway line. The path was nice and quiet, and I found myself towards the back, looking at the group cycling and chatting up ahead. I think someone wasn’t paying attention, because a cyclist coming the other way had to swerve off the path and stop on the verge in the face of the oncoming group. All I could do was give him an apologetic wave as I went past. It goes to show that just because you’re not on the road, doesn’t mean you can stop paying attention.

After crossing the road at Rosewell, we followed the now paved path into Bonnyrigg, where it got busier with dog walkers. When we reached the new hospital, we rode through the car park and out the other end, where we came to our lunch stop: the Orchard Cafe at Mayshade Garden Centre.

It is a good thing that the cafe has expanded so much over the past year or so, so it could easily accommodate a sudden influx of cyclists. I couldn’t resist the bangers and mash, although Colette’s ciabatta was very well filled with roast beef. I think everyone was happy with their choice and well fed by the time we left.

To get back on track, we left the garden centre, crossed the road and through the hospital car park so we could cross the footbridge leading to Tesco. We followed the detour signs for the cycle route, around the workings for the new Borders railway, then zig-zagged through Eskbank till we found ourselves at Newbattle Abbey.

The ride through the wooded grounds alongside the river was as pleasant as ever. We rode single file there, as the dangers of riding two-abreast were more plain to see: going off-course to the left could have had unfortunate consequences. It was all plain sailing until we attempted to follow the path from the abbey grounds into Waterfall Park. A white van had decided to park itself on the path, completely blocking it. We had to drag our bikes through brambles to get round it, and we were thankful that nobody picked up a p*nct*re.

From the park, we made our way through Woodburn and towards Dalkeith High School campus following cycle route 1. After the school, we noticed signs saying cycle route closed ahead. That started me thinking of alternative routes, none of which were all that obvious, although Stewart had brought a map with him, which would have come in handy. As it turned out, there was work being carried out on electricity pylons, just after the point where the path runs underneath the A68. We didn’t have long to ponder the situation before a man emerged from a van and waved us through. So we manouvered our bikes and ourselves under / over / around the barricades and thanked the chap for allowing us to keep to our original route.

That route, still amazingly going 100% according to plan, took us to the Crossgatehall junction and from there to the start of the railway path that goes to Ormiston and Pencaitland. For our purposes, we only needed follow it for a couple of miles, before taking a small path leading off to the right down a dip and across a small wooden bridge before climbing again on the other side. Colette stood and took photos of us crossing the bridge one-by-one, but there were no dramatic spills to be captured.

At the end of the narrow track, we came back onto tarmac, well I’m sure there was tarmac somewhere beneath all the loose gravel. We had effectively bypassed Cousland and were on quiet roads surrounding the village. So it was surprising that we saw so many cars, until we realised it was the afternoon school run time. At least one of the drivers clearly wasn’t very cyclist tolerant, and appeared to be fuming at having to slow down to pass us safely. It really was quite a surprising reaction, but then again, she might just have been having a bad day.

Meanwhile, we were having a lovely day, gently making our way towards Pathhead. Perhaps the pace was a tad too gentle – Colette and I found ourselves at the front and shouts of “speed up” were heard from the back.

It was like a different world once we reached Pathhead. The A68 was just so busy and the cars behind us were impatient to turn into the stream of traffic. We needed to do that too, but only for a short distance, as we were taking a left turn for Crichton at the bottom of the village. Finally, we got our chance to jump into the river and pulled over at the opposite bank just a bit further downstream. Away from the roar of the traffic, the pace was once again dialed back to “enjoy”.

The road from Pathhead to Crichton starts off level but starts to climb quite steeply by the time you reach the village (“hamlet” is probably a better description). With our climbing legs warmed up, we gathered at the T-junction in Crichton and discussed the various approaches to hill climbing. The forthcoming steep descent and equally steep ascent were foremost in our minds. The submissive approach was the most popular for this particular climb, and most of us chose either to slug it out in lowest gear or to “stop and take pictures of the scenery” along the road. Mind you, some of the best views of Crichton Castle are from this part of the road. Moving on… 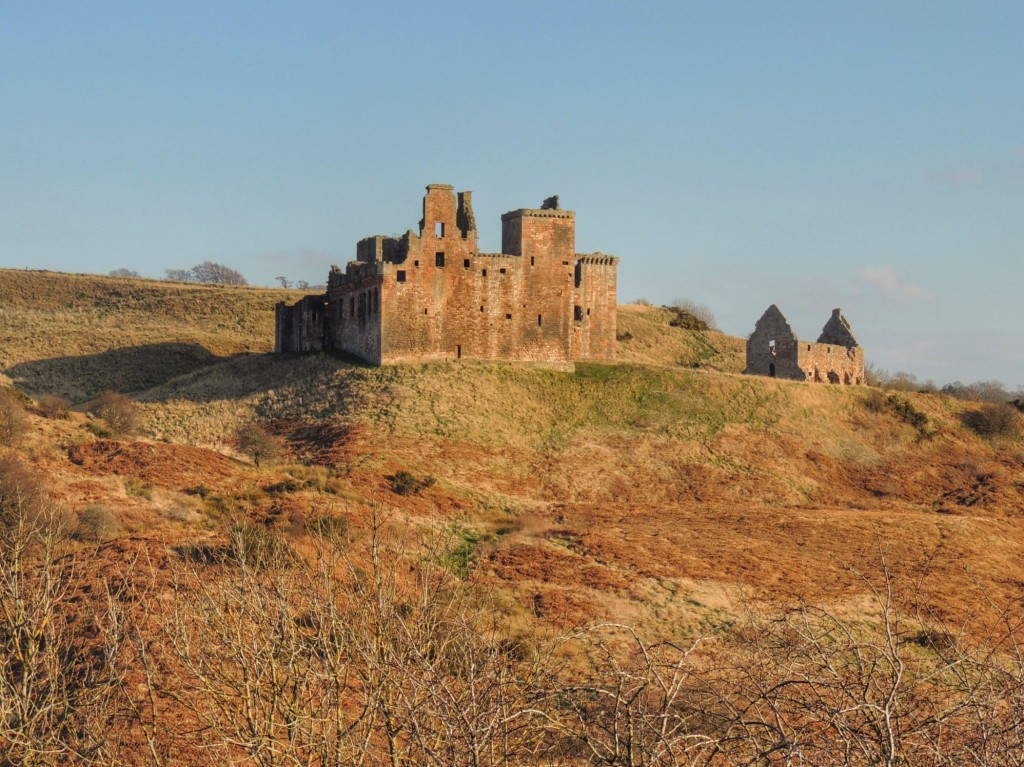 A lovely view of Crichton Castle, taken whilst stationary…

The road then took us into Borthwick, via a lovely hairpin bend over the Borders railway line, made a bit more tricky by debris from the ongoing construction works, to a flat valley overlooked by Borthwick Castle. It has to be said that the final hill up past the old school and back into North Middleton was indecently steep for this late stage of the route (sorry about that), but we had all had such a lovely day that nobody really cared.

As a postscript, while we were waiting on the traffic at Pathhead, Janette reminded me of the ride a couple of weeks previous where I thought I’d lost my jacket, and how she thought the whole escapade was hilarious. I agreed and put it down to getting older, but then guess who should phone up later to report some missing gloves, left on the roof of the car before driving off? OK, so the gloves were genuinely left behind in this case, rather than hiding on the back seat of the car, but luckily Fiona had already spotted them and picked them up. Whether it’s old age or not, and arguably none of us are exactly immune to that, I say just relax and enjoy the cycling!