When the rain is lashing down or the roads are covered in snow and ice, I’m glad that I have a turbo trainer setup in a corner of the house. That way, I can just jump on and spend an hour or so on Zwift instead of risking life and limb in the great outdoors.

However, there are often times when the choice isn’t so clear cut. As was the case this weekend. On Saturday morning, I ventured outside briefly and decided it was too chilly for me, choosing Zwift instead. I decided to do the Greatest London Loop, while Colette got wrapped up well and went for an outside cycle. That got me pondering the pros and cons of Zwift vs real life.

For convenience, Zwift surely wins hands down, assuming you have a fully assembled setup, ready to go. It took me 5 minutes to get changed into my minimal cycling gear, fill a water bottle, grab a towel and go down to my Zwift zone. Then another 5 minutes to boot up Zwift, turn on the fan, “calibrate” the power meter, select my route and start pedalling.

The actual experience of Zwift is very much in the eye of the beholder. Clearly not as real as real life, but I do feel the graphics are quite immersive. On the other hand, they do very little to persuade Colette that she isn’t sitting on a stationary lump of metal designed to inflict pain and discomfort.

I’ve been wondering whether upgrading from a “dumb” trainer to an interactive one (which increases or decreases the resistance depending on whether you are going up or down hill) would make things even more realistic. In fact, that was going to be on my wish list for this Christmas, but unfortunately all the models in my price range have been sold out for months (blame Covid!).

My virtual London ride involved some mostly flat tootling around central London before taking the magic underground that comes out in the Surrey hills. Then most of my time was taken up by climbing Leith Hill. This is quite a long slog, starting off at a fairly gentle gradient before ramping up to 10-12% in the last mile or two. Since I don’t actually feel the gradient increasing, I had to keep an eye on it and increase my effort by going to a harder gear to prevent my avatar from just grinding to a halt. I tried to do around 200 Watts for the steep section, as I would be doing something similar to that in real life. 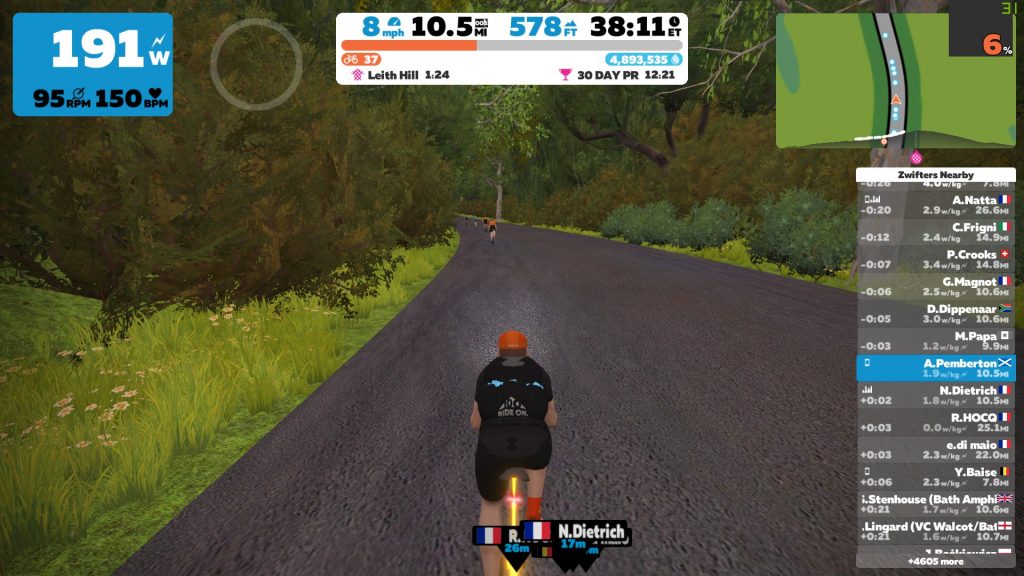 The downhill that followed saw me reach virtual speeds in excess of 45 mph, which sped me towards the finish point in just under an hour. I went back upstairs dripping with sweat and had a 15 minute cool off before taking a shower. I certainly felt like I’d had a good workout, but when Colette came in from the cold, I knew I’d taken the easy option. So I was determined to do a similar ride the next day, but do it outside instead.

When Sunday came, it was less windy, but colder than the day before. The temperature was 4 deg C, feeling like 0 deg C with the wind chill. I got wrapped up with 4 layers on top, plus arm warmers, double socks, full length leggings, thick gloves and a scarf as well. Having to search out all the extra layers and put them on, as well as bringing the bikes out of the shed meant that getting ready added on an extra 10 minutes at least compared to going onto Zwift.

It had rained quite heavily overnight, so the road was wet and a penetrating dampness hung in the air. Despite that, the short 5% climb after leaving the village served to warm me up. By the time I’d done a couple of miles, my top half was toasty warm, while my legs were OK and my feet and fingers remained a little colder than desired.

One of the potential downsides of real life compared to Zwift is that you are at the mercy of overtaking traffic. Luckily the A7 was quite quiet this Sunday morning – only about 4 or 5 cars had gone past by the time I turned off onto minor roads at Heriot.

Once past Heriot, over the bridge and clear of the trees into open countryside, a headwind became evident. It was only a moderate breeze, but it certainly slowed me down. Zwift doesn’t do wind! 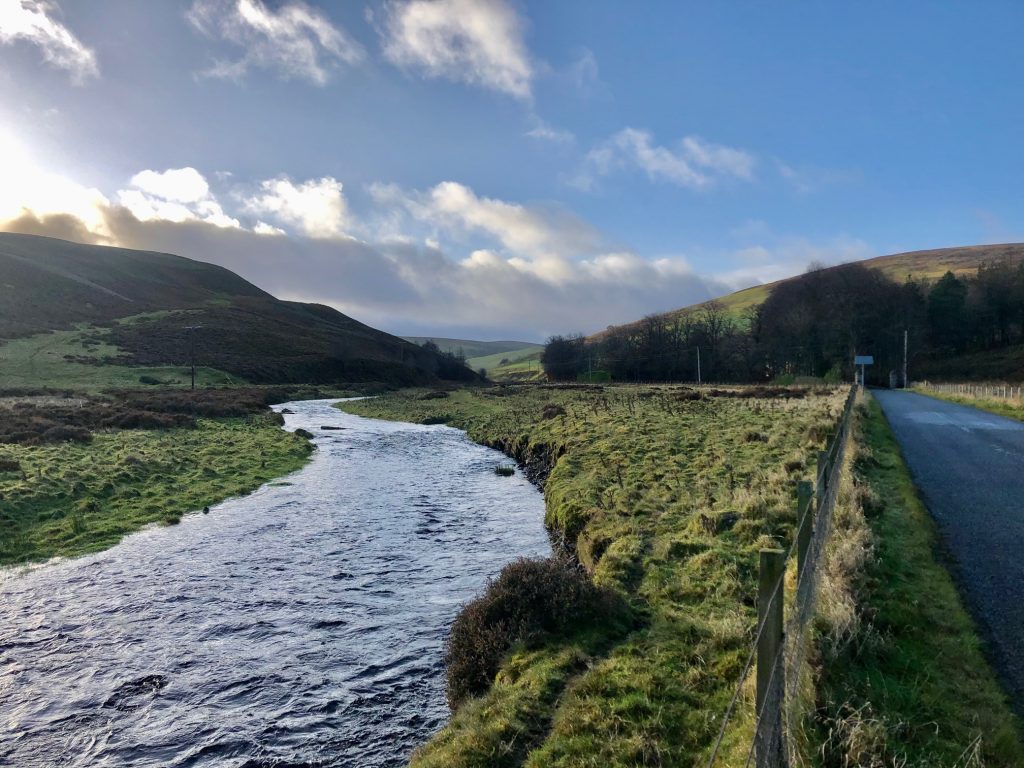 Breathing in the fresh air was refreshing though, and the scenery in the sunshine (yes, it was a lovely sunny day) was uplifting. Looking at my heart rate, I seemed to be working harder than the day before when I was on Zwift, but not going particularly fast.

When I reached the main climb of the ride, named “climb to waterfall” on Strava (though I have no idea where the waterfall is!), I tried to go up at around 10 mph, with HR around 160 bpm. I don’t have a power meter on my winter bike, but on my other bike, this kind of effort would equate to around 200 Watts, and was an attempt to replicate the Leith Hill effort of the day before.

Near the top of the climb, I stopped to speak to Colette as she passed, having set off after me to climb the Granites from the opposite direction. The wind was in her face going up, whilst I had it behind me going down. Wheee! Not nearly as fast as the virtual descent of the day before, but I was happy enough with over 30 mph. It was pointless trying to pedal on this downhill, as my top gear on this bike is just 39 x 11.

Soon, I was home, peeling off damp layers and having another 15 minute cool down before shower time. My body in general felt very similar to how it did on finishing the Zwift workout the day before, but my lungs felt the benefit from breathing in the fresh air deeply for an hour (I’m asthmatic, so that’s important). And added to that, I felt a certain uplift that’s hard to describe from spending time outside in the sunshine.

So, now it’s time for the final scores…

Some comments: despite the real life ride being apparently harder work (in terms of average heart rate), the Zwift ride was significantly faster. No surprise there, although it would have been a bit faster if I’d used my road bike (honestly!!!). I would discount the estimated average power from Strava, as it can’t factor in things like wind or road conditions or my non-aero winter jacket. I could get my winter bike kitted out with a power meter too, but not seeing power data allows me to just potter on this bike when I like to, without feeling guilty that I’m not pushing the watts!

My final conclusion is that for me, real life beats Zwift if I can get myself suitably dressed and motivated to brave the elements. However, I won’t beat myself up if I choose Zwift instead as any kind of cycling is better than no cycling.

Oh, what’s that? I didn’t mention that you don’t have a filthy bike to clean after your ride if you stick to Zwift? Well, you can just do what I did and sling the dirty thing in the shed and forget about it till next time. Awful I know..