As the coronavirus pandemic rages on and we stay safely indoors, people have looked to home-based challenges to give themselves something to focus on. We have had 99 year-old Captain Tom doing laps of his garden, and also Geraint Thomas doing three 12-hour shifts on Zwift in his garage, to mimic an NHS working week. Both of them were fundraising for NHS charities.

I joined G on Zwift for a small part of his challenge and when I finished after 2 hours, I found that I was feeling tired but fine. And by “fine”, I mean that my bum wasn’t sore! 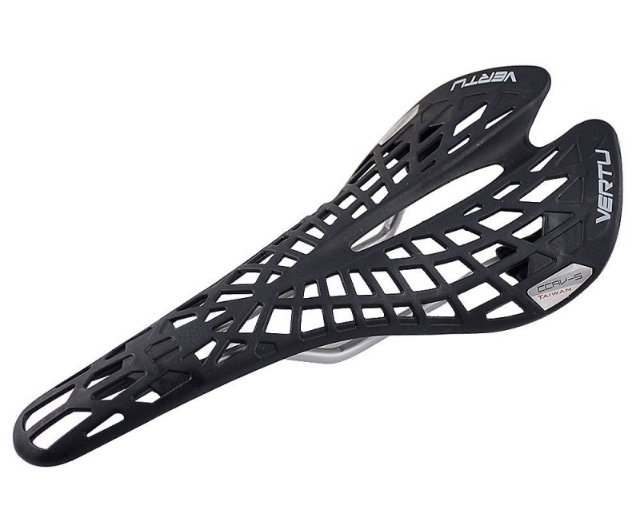 The dreaded sore bum is a common occurrence, and well known to anyone who has ever used a static bike indoors. However, since changing saddles a few months ago, I have chanced upon a combo that is really comfortable. (…and if I might digress for a bit, that is specifically the Vertu saddle, a dirt cheap knockoff of the Tioga Spyder. It is basically a plastic saddle with a web-like mesh of holes. This makes the saddle that bit more flexible and springy, and therefore comfortable. However, it is essential to have some good padding between the saddle and your buttocks, otherwise they will end up with a crazy-paving-like imprint. So for belt and braces, I have added a gel saddle cover on top, and always wear padded shorts, of course.)

OK, all this meant that I could think about doing my own Zwift challenge. Not for any particular cause, but just to see if I could do it. I don’t exactly have much else to do. So I decided to aim to ride 100 miles in the virtual world of Watopia, all from the comfort and safety of my own home.

It would take a certain amount of planning, although not as much as a real-world 100 mile ride. First and foremost, I wanted it to be as genuine an attempt as possible, so I transferred the power meter crank from the road bike to my turbo trainer bike, as it is far more accurate than the power meter built into my Satori Smart trainer. Then I went to bed the night before wondering whether 2 or 3 breaks would be best, and when to take them. It began to niggle during the night that I hadn’t done any build-up rides. After all, I wouldn’t dream of riding 100 miles in real life if I hadn’t done any rides of much more than 20 miles in the past couple of months. The caveat to that was that I wouldn’t actually be moving an inch, so I could abort any time I liked. That settled it, and I was able to get to sleep.

I was up nice and early next morning, aiming for an 8am start. I had a good breakfast and got set up on the bike with a bunch of snacks alongside and two water bottles. I set off along the “Tempus fugit” loop, which runs through the desert and is popular because it is just so flat. It should be the speediest way to reach 100 miles.

Additionally, I was careful not to go too fast at the start, in order to conserve energy. I planned to keep the heart rate below 130, but even so, I felt my legs weren’t happy, which was a worry.

After two and a half laps of Tempus fugit, I decided to have a change of scene and headed downtown. That involved the odd short incline, during which I pushed a little harder, to save me slowing down too much. The increased effort made my legs feel better, so I decided to stick with the slightly increased work rate. 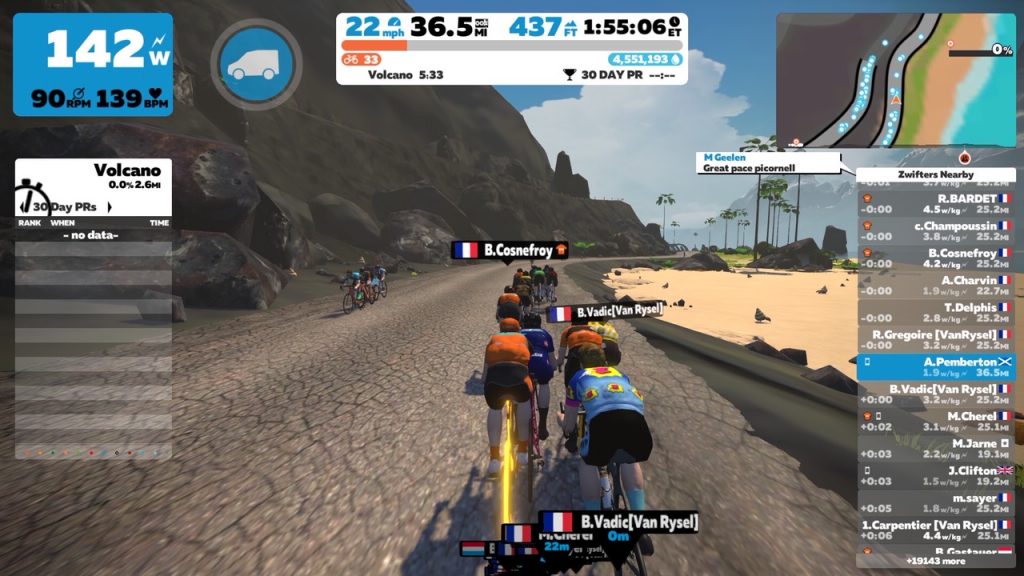 I ended up at the volcano and found myself riding round the counter-clockwise volcano loop.  This turned out to be a good idea, as it involved a bit of downhill, where I could stop pedalling and stand up on the pedals for a stretch while my avatar freewheeled. At that moment, top AG2R rider Romain Bardet and some of his teammates swept past me. Always good to spot some pros when on Zwift, and most of them are doing it now, even Chris Froome.

At 40 miles in, I had decided to take a break, so I went upstairs and made myself a sugary espresso, refilled the water bottles and also put some potatoes in the oven for lunch. After I’d finished my coffee and a small snack, I went back to the “pain cave”, picked up towel number 2 and got back at it.

It seemed like a good idea to stick with the volcano loop. Each time you complete a lap, you pass a counter that increases by one. There is a special achievement for going 25 laps, so I thought I might as well aim for that.

By somewhere around 50 miles in, fellow Zwifter James O’Neill had spotted that I was up to something, and commented on our Zwifting WhatsApp group: “Alan P smashing in a big Zwift effort currently”. So the cat was out the bag and I had to fess up about going for the century.

I passed the metric century mark (100 km = 62.something miles) and was still feeling good, so it was full steam ahead (well, about 2/3 steam actually) for the 100 mile goal. Messages of encouragement came in, keeping me focused.

Colette had been out riding in the real world, then returned with an espresso in hand. The potatoes were nearly ready, so I decided to pause for lunch at 75 miles. I bounded upstairs, still feeling surprisingly sprightly. My baked potato was was lovely with cheese and coleslaw. I took time for a cuppa, then water bottles were refilled and towel number 3 taken. 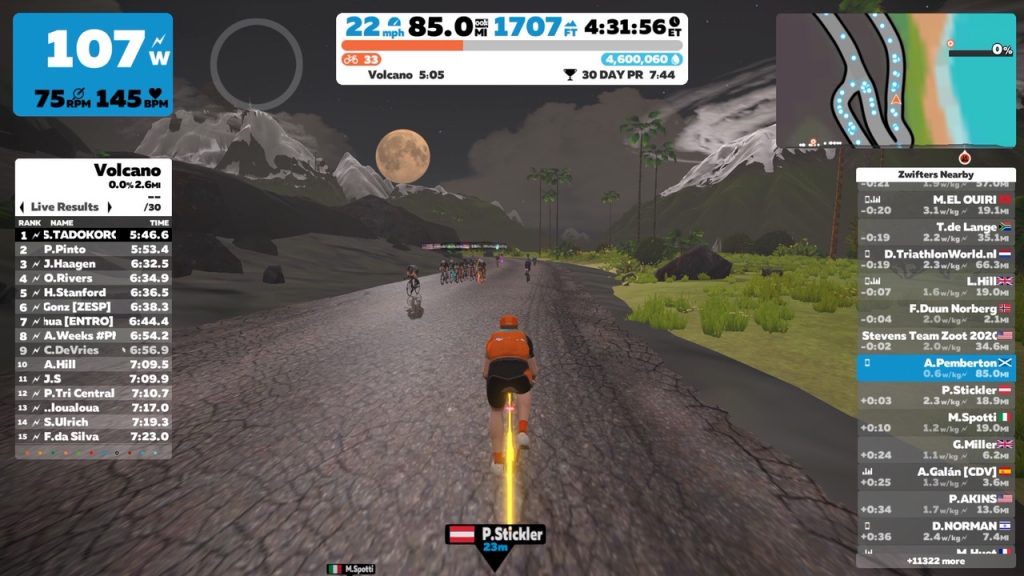 I rode night and day…

When I got back on the bike however, my legs decided that they had other ideas. I was able to continue cycling, but at a lower intensity, which was steadily decreasing. Then at about the 90 mile mark, my bum finally started to feel uncomfortable too. The encouraging comments over WhatsApp were really helpful to keep me going. 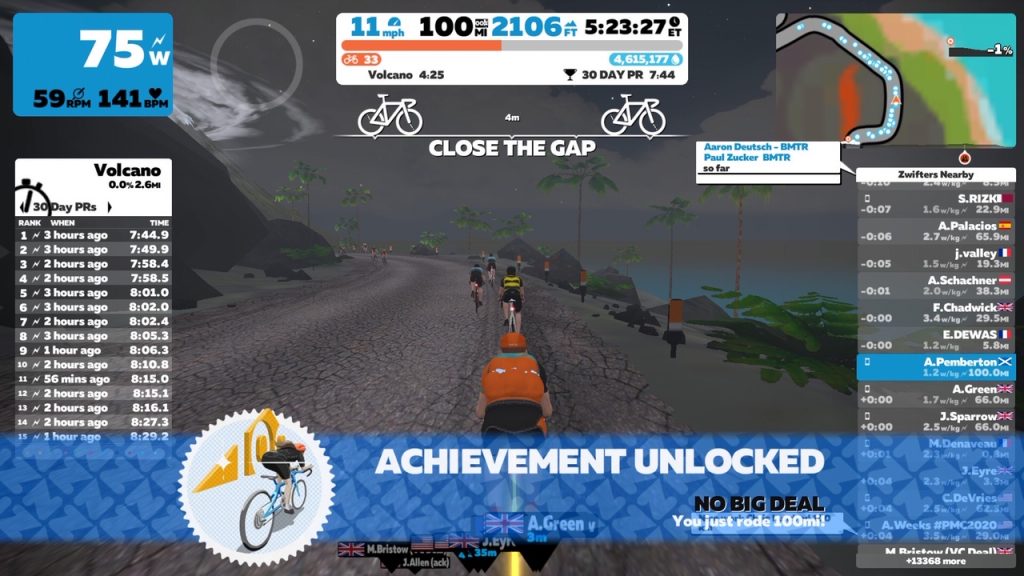 It wasn’t until nearly 99 miles that I reached the goal of 25 volcano laps, and I was officially “On Fire”! You’re not kidding! After that, I just had to limp on slowly until I pedalled past the 100 mile goal, continuing for a little more till I got to the downhill section and stood up for the final time before dismounting.

So it was over, taking a total of 5 hours 25 minutes of cycling time, at an astonishing average of 18.5 miles per hour. There is no way in real life that I could complete the distance in that time, but I know my watts were as accurate as I could get, and not exactly stratospheric at that (126 W average)! It’s just the way Watopia works and it’s the same for everyone, so I’m not complaining. I’m certain that I couldn’t have kept going for another hour!!! 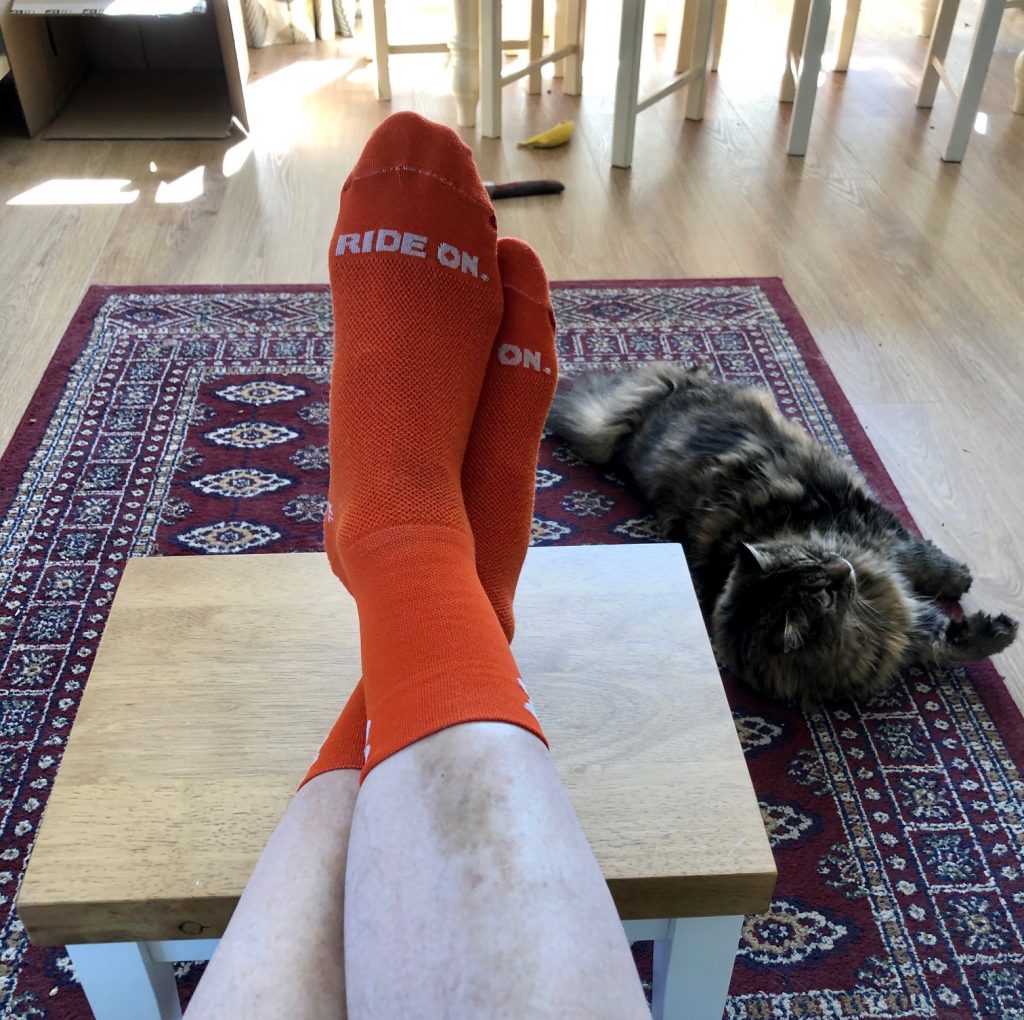 It was a good feeling to have achieved the challenge, so I put my feet up for a good long rest, only disturbed by a couple of bouts of cramp (ow ow ow!!!). Will I do another Zwift challenge? Well probably not this one again, but if the lockdown continues for the foreseeable future, I’m sure to find another…