Our winter escape to the sun venue this year has been Gran Canaria. Colette and I were joined by Lynne and Keith, Susan and Alison, and we all stayed at the same hotel in Maspalomas on the southern tip of the island.

On day 2 of our holiday, we felt ready to explore the mountainous interior of the island. The chosen route involved first cycling east along the coast. We began by navigating the busy roads through Playa del Ingles, pausing to look at the views when we arrived at the seaside.

We cycled very carefully and slowly along the seaside promenade which was thronged with people, before making our way out onto the main road (GC-500). Apart from a couple of short climbs, this road was pretty flat and fast, but on the other hand, it was not very picturesque, and was busy with traffic.

When we arrived at El Doctoral, we started looking for a coffee stop before we headed into the mountains. After a bit of looking, we found a small bar on a street corner and decided to pop in for a quick caffeine hit.

Next, we took advantage of a cycle path for the next flat mile or so, before turning sharp left onto the GC-65, which heads into the interior of the island. The road immediately started to climb, but only very gently to begin with.

The scenery wasn’t much to write home about to begin with. “Fifty shades of brown” would sum it up quite nicely. It wasn’t helped by the drab light due to a covering of cloud at about mountain top height. However, the temperature was in the high teens, so we certainly couldn’t complain about the weather! 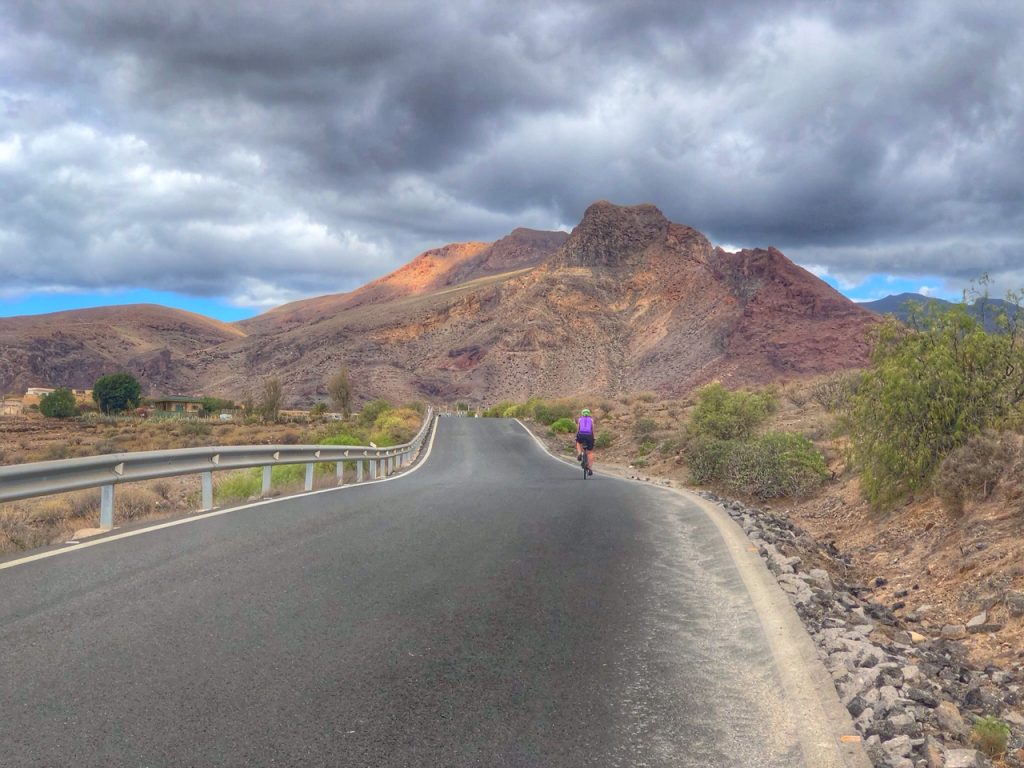 As we progressed, the climb began to get steeper and more winding, and the mountains began to open up before us, with their jagged, tree-lined ridges. Passing through Era del Cardon, we could see the road ahead running up the other side of the valley to a pass at the top.

It took a few twists and turns before we got onto that section, and as we were plodding our way up, we were passed by a Team Ineos rider, who shouted out a friendly “Hello” as he passed. The accent sounded like Michal Kwiatkowski to me, and Colette recognised the ears, as the former World Champion sailed past us at great speed. 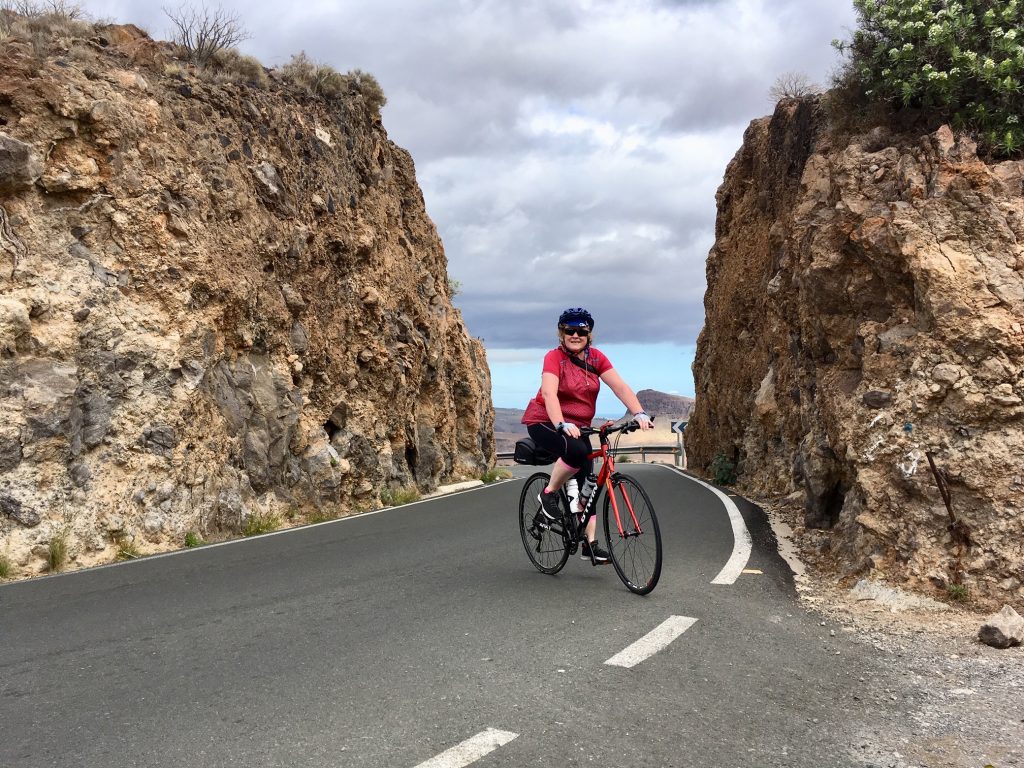 At the top of this section, we regrouped on the far side of a channel cut out of the rock, after which the gradient was flatter for a while, although the road was full of twists and turns. The rock face made it hard to see round the corners, and there was a fair amount of traffic up here, so you had to stay well in on the right. The local drivers made good use of the horn to warn of their approach.

Nearing Santa Lucia de Tirajana, the road climbed again, meaning we were all getting weary by the time we reached the village. It was definitely time for lunch, so we stopped at the first place we could see: a bakery with tables outside. They did drinks, filled rolls and pastries. That sounded just perfect, so we made a good lunch out of that. Initially, we sat in the sunshine, but the cloud came over again and a bit of wind made us start to feel a chill, so arm warmers and jackets went on. 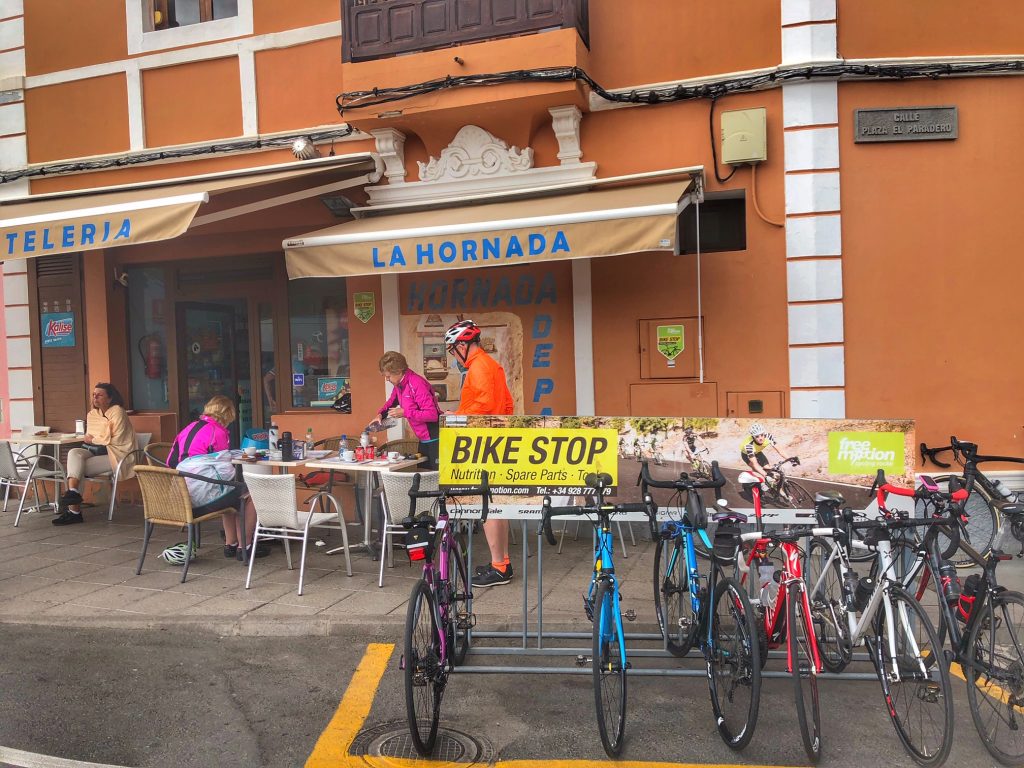 Our lunch stop in Santa Lucia

We needed the extra clothing to mitigate the cooling effect of the downhill section that followed. That descent just meant that we had more climbing to do (nearly 1000 ft) before we could reach the high point of our ride just beyond San Bartolome.

It was quite a lot of climbing for us, but we took it easy and got there in one piece. Alison had forged ahead and had quite a long wait at the San Bartolome junction before we all gathered together and headed up the final section to Alto de Fataga, our high point at approximately 3140 ft. 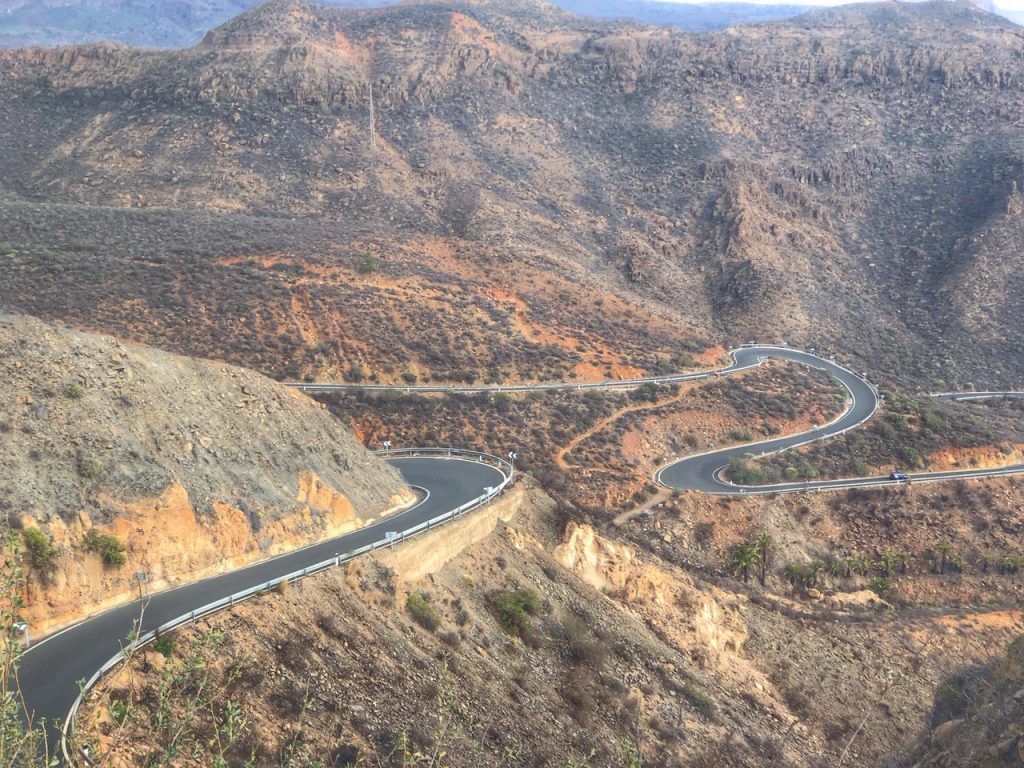 Any clothing that had been removed on the climb was replaced for the descent, which was getting on for 2000 ft, running through the village of Fataga. At one point, Susan and Keith went past me while I was stopped for a photo. I then rejoined them, and Susan gladly led us down, making a great job of finding the best lines through the corners. 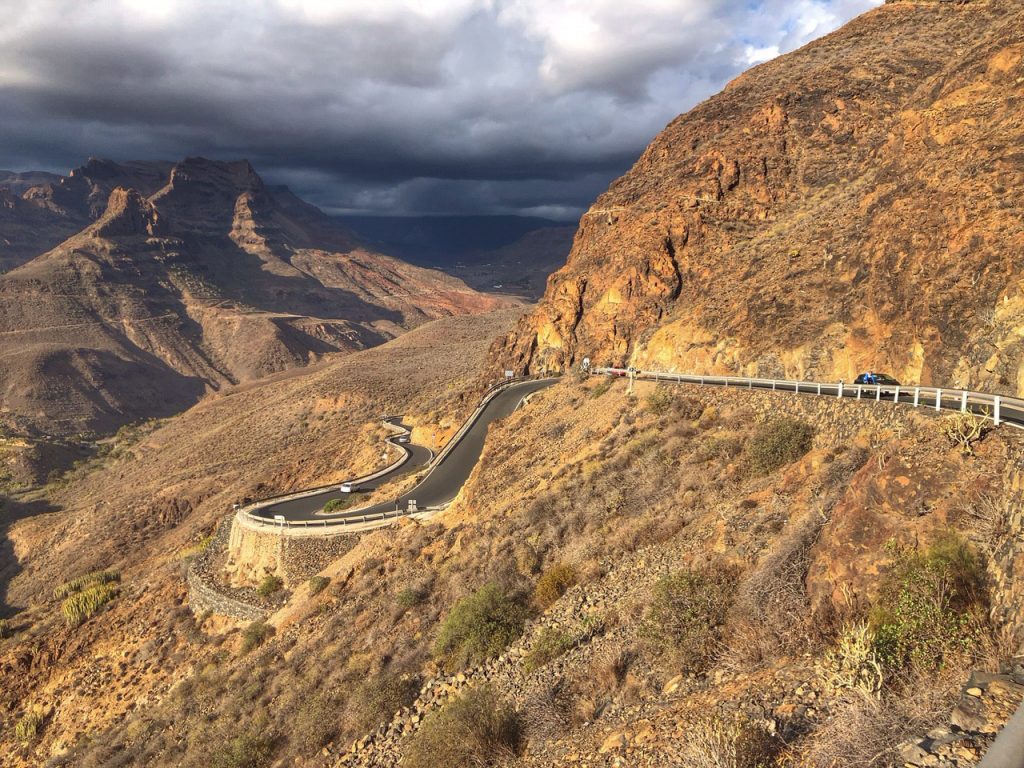 Looking back on the impressive last bends before the final summit

Sadly, it wasn’t downhill all the way back to the hotel. I knew in advance that there was a little uphill blip in the profile to get over first. In reality, it was quite a major blip, with some steep gradients round a spectacular double hairpin to be negotiated into the bargain. After that, a short but fairly steep slope took us to the viewpoint Degollada de las Yeguas. There really was a spectacular view from there into the mountain range, especially as the sun was getting low and highlighting the cragginess of the terrain. 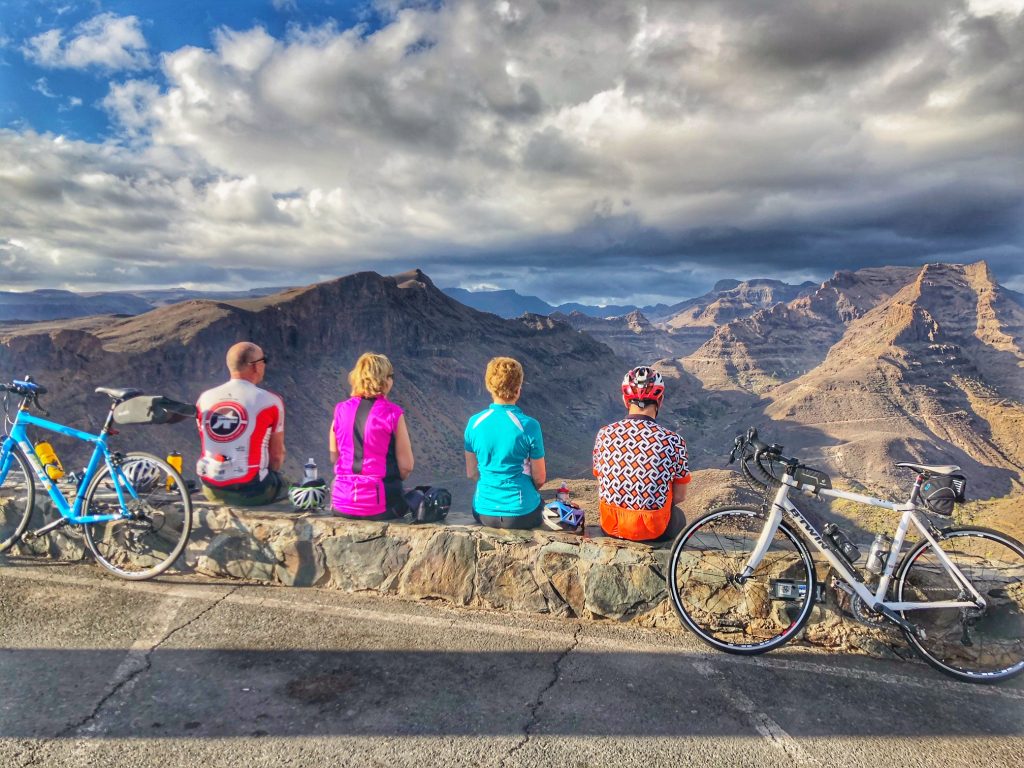 From there, another fast decent took us back to civilisation, busy traffic, and finally our hotel for a well-earned sangria.

After a week of riding in Gran Canaria, there was a general consensus was that this place wasn’t really for us. We’d had a good holiday, but speaking for Colette and myself, the overall package isn’t as good as elsewhere, such as our recent trip to Ibi. The mountain roads in Gran Canaria are phenomenal for sure, but we like to get away from it all, and it was difficult to get completely away from the traffic. Saturday seemed to be “relatively” quiet on the coast road, but beware Sunday in the mountains and the scores of motorbikes roaring around at high speed. We probably won’t be coming back, but if you are a strong cyclist looking for challenging mountain roads and don’t mind busy traffic, this place is definitely for you!