We were so pleased to have booked a wee holiday to Spain at the end of November, given the awful weather at home and near absence of outside cycling this month. In fact, this was booked back in August, while we were watching the tour of Spain on telly. The cyclists were in the mountains north of Alicante, and I mentioned that Alcoy would make a good base. Then after a flurry of activity on Colette’s phone, she revealed she’d booked us a week self catering in Ibi at the end of November!

The day finally came when we arrived in Ibi (a few miles to the west of Alcoy) and it was raining, although it was dark by the time I made up the bikes, so we wouldn’t have managed a ride on day 1 anyway. The next day was forecast to be dry and sunny, but the wind was an issue, with a warning out for gusts up to 80 km/h!

We really didn’t want to cancel our first day’s cycling in Ibi if we could help it. So I decided it would be a good idea to cycle to Alcoy with the wind at our backs, then return via the wooded area in the hills above Alcoy, which might give us some shelter on the way back. Sounded like a plan, so off we went…

The wind helped us on the road out of Ibi, as far as a roundabout where we joined the service road alongside the A7 motorway. We fairly motored along there, but some sudden sideways eddies in the wind took us by surprise, so we had to knock off the speed a bit.

A few miles in, and we were at another roundabout, where we could take the road to Alcoy. There were a few spits of rain in the air and great dark clouds hovering over the hills to our left, where we were intending to go. However, to our right, all looked bright and sunny. So sudden change of plan… we headed south towards Xixona instead. 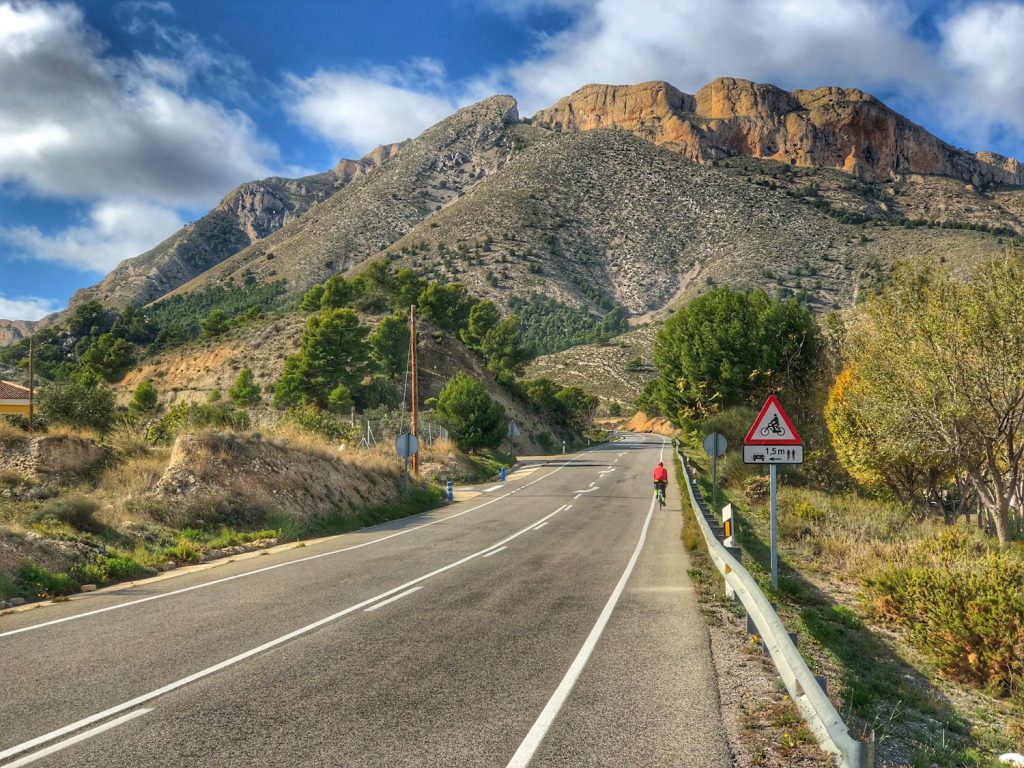 Pretty much straight away, we came to a sign telling of a 5% climb ahead, lasting 5 km. It was a nice, steady climb, taking us though an area of scrub and low trees. The wind wasn’t a problem for most of the climb, but coming towards the top it got more blustery, and at the very top (the Puerto de la Carrasqueta) it was positively gale force. 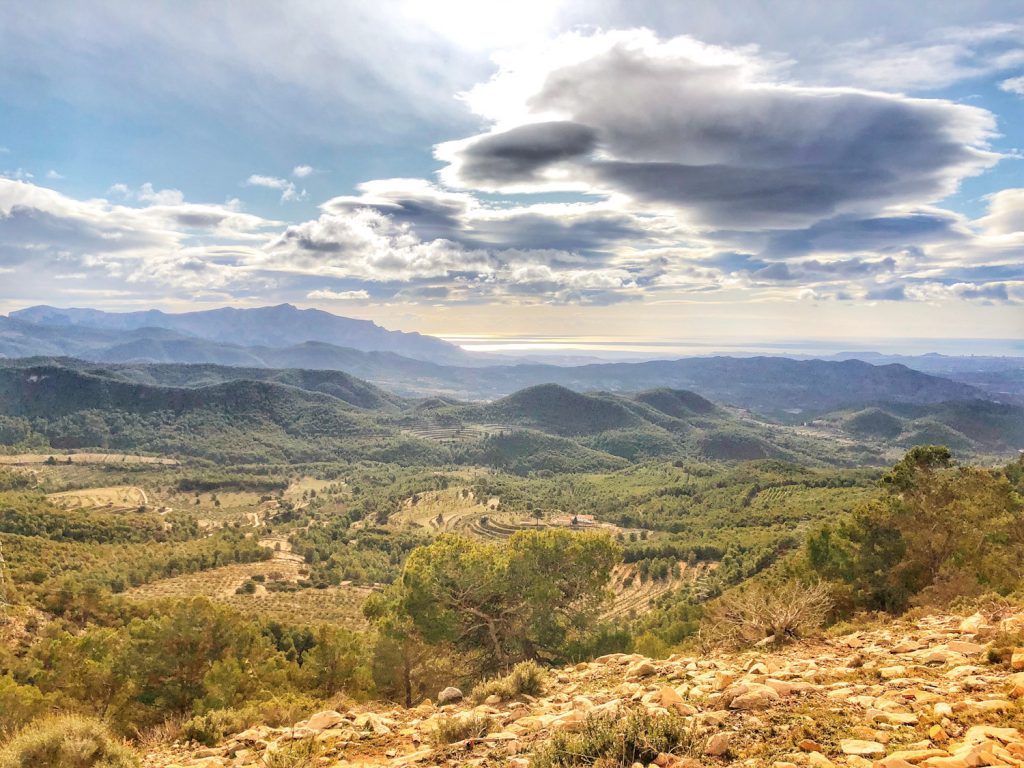 View from the top

I went over to the “mirador” to look at the amazing view from 3500 ft up, all the way down to the Costa Blanca. Turning around, it was hard to cycle back to the car park. I took shelter behind a small building while waiting for Colette to catch up, and after a second look at the view, we started the descent.

We were now partially sheltered by a ridge in the mountain as we descended, but huge gusts still took us by surprise, so it was a very tentative descent, broken up by stops to look at the view. At one of those, I discovered I’d left my water bottle behind at the top, but we were a mile into the descent by this point, so I decided not to go back for it! 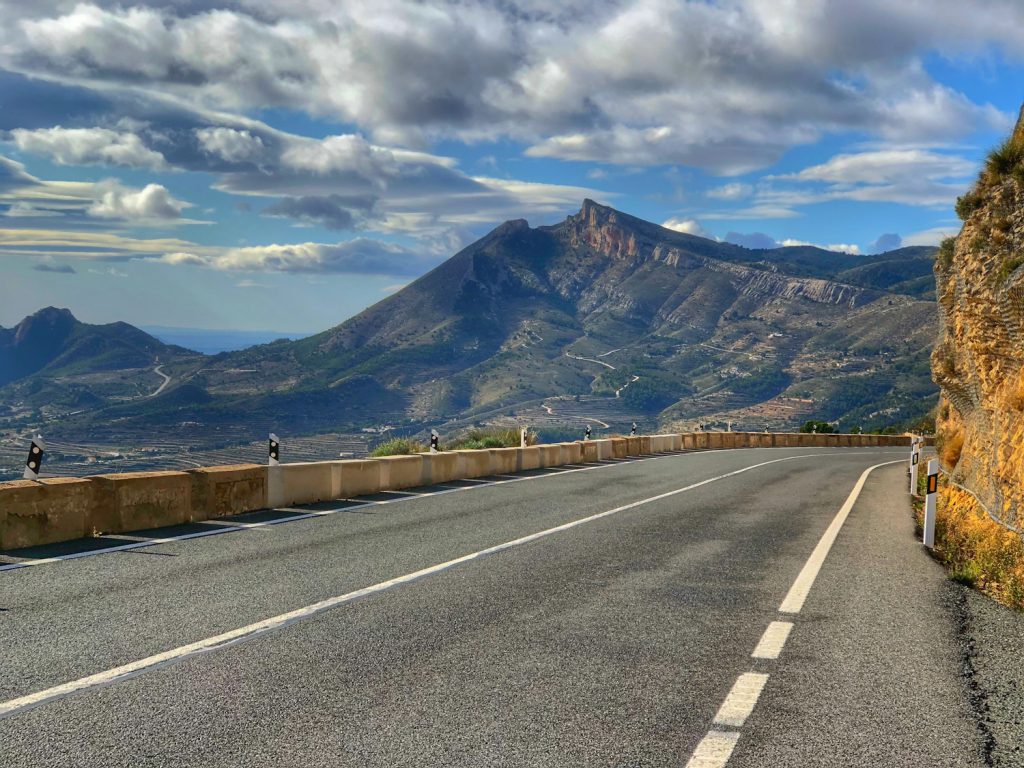 On the way down

This near 2000 ft descent should have been great fun, but on this day it was just a case of getting down in one piece: a tense affair, punctuated by moments of extreme fear. But we made it all the way to the bottom and into the town of Xixona, where we were on the lookout for a cafe. After circling the town for about 10 minutes, we finally found an ice cream shop open and went in.

The place was quite busy, possibly due to it being apparently one of the few places open on the middle of a Saturday afternoon. We had a couple of coffees and just had to try some of the ice cream. It was great. So good in fact, that we came back another day for more.

Back on the road, we had to negotiate some steep switchbacks to get out of town, bringing us to the bottom of the Puerto de Tibi climb (4km at 5% average). The first km was the steepest, at around 10% for quite a while. Luckily, the wind was not a problem here, and maybe was helping somewhat. To the left was another great view down towards the sea, and to the right, impressive rocky outcrops at the top of the mountain were highlighted in the sun. 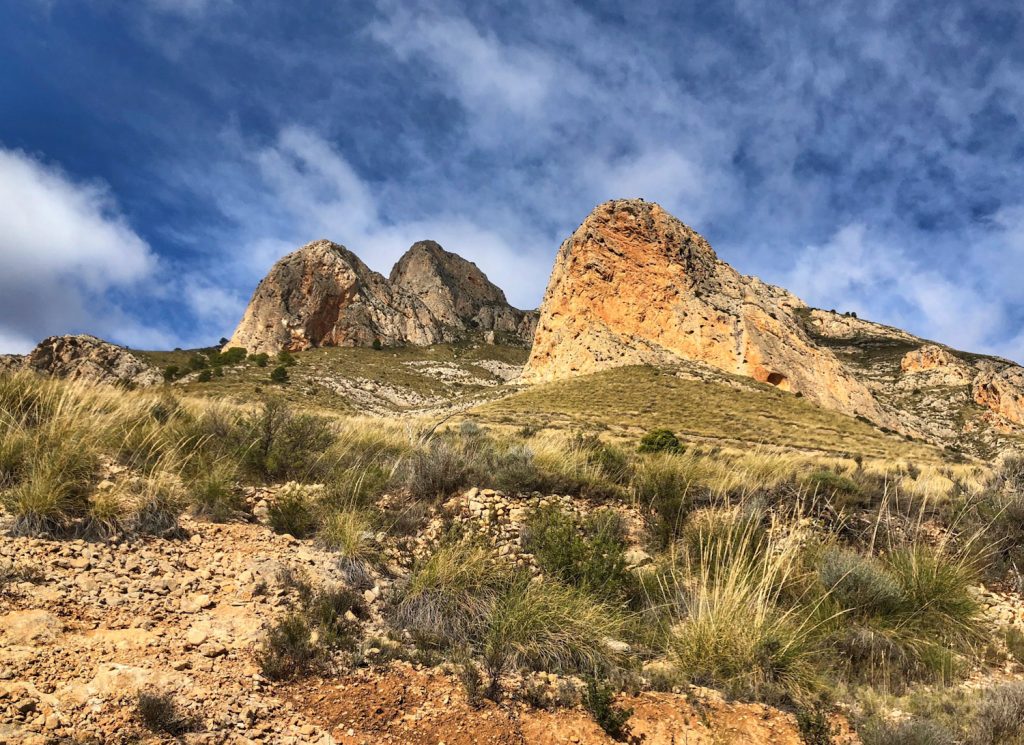 As the climb progressed, it became windier and windier, especially once we turned the last corner and caught sight of the top of the climb. In fact, the wind hit me like a wall, stopping me dead, alongside a plastic roadside marker / bollard. My bike got entangled in the thing and I stumbled into the ditch, breaking the bollard. Ooops.

It was all I could do to stand up after that. It wasn’t possible to remount, so Colette and I both had to push our bikes against the gale that was funnelled over the top of the pass. We seriously considered continuing to push downhill, but remounted and took it easy. The wind decreased in strength as we carefully descended towards the village of Tibi, where the road twisted and turned downwards, then steeply upwards as we reached the entrance. 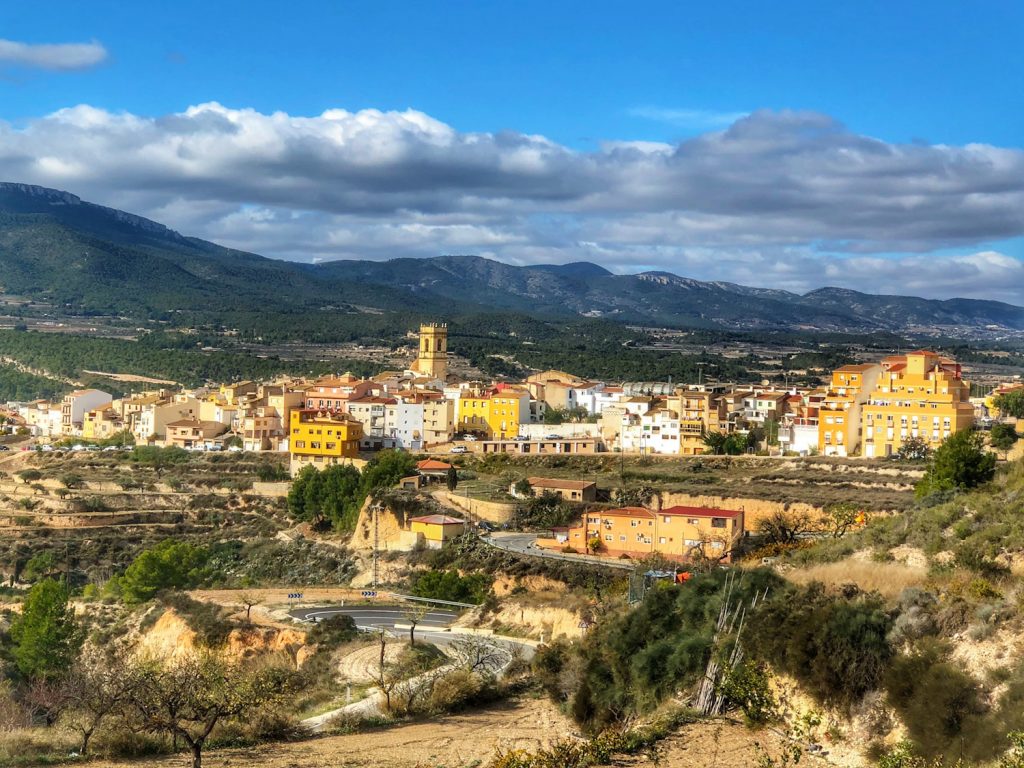 Looking down on Tibi

We quickly found a bar where we had lunch. We valiantly tried to decipher the tapas menu before just saying “gambas por favor”. Cooked in garlic, the prawns were delicious. We also managed to secure for ourselves some bread and some patatas fritas, so we ate plenty to fuel us on our way.

The remainder of the ride was still mostly uphill to Ibi, but the gradient was kinder and the wind less brutal. There was a small hitch when we arrived at the outskirts of Ibi, as the road was closed for roadworks. Luckily the A7 service road came in handy for a wee diversion, and we made our way safely back to our accommodation.

It was a brutal day for sure, but we covered some great roads and saw some beautiful scenery to whet our appetite for the rest of the holiday.