The days are getting shorter and the rain seems to be falling incessantly, meaning less time spent outside, and turning a cyclist’s mind to Zwift. Not that it’s all cyclists by any means, just a small subset, but I’m one of them, and for that reason, I like to write about it occasionally. So be warned: the following will only be of interest to those immersed in the minutiae of Zwift and turbo training.

It’s hard to believe that I’m now on my 5th winter of using Zwift, starting out using “zPower” with my simple Decathlon turbo trainer and speed sensor, before moving up a little to a Tacx Satori Smart, which has a built-in power meter. That was important, as I wanted to be more confident in my power output. The watts are what it’s all about in Watopia.

After a winter of Zwift, once the weather improves and I get back on my bike more often in real life, I really miss seeing how many watts I’m pushing out. Forget speed – I’d much rather know the watts! The answer to that has been to buy a power meter. It’s a bit of an extravagance I know, but a left crank-based power meter, like the 4iiii Precision model I bought from Mantel.com, can be had for under £300 if you shop around and aren’t too worried about getting an exact match for your right crank. It has to be the same length though, obviously!

I fitted the power meter to my road bike at the end of June and have found it really valuable to know my power. It hasn’t been used for any specific training (I’m not that serious about it), but it helps me gauge my effort on hill climbs and the like, alongside my heart rate, and I’m sure it has helped me beat some PRs.

Soon after starting out with the 4iiii power meter, I did an FTP test, which came in at 250 W. Now, I would have been very happy with that, had I not got a FTP of 277 W when using Zwift with the Satori Smart. I began to wonder whether the Satori was making me seem more powerful on Zwift than I really was…

Recently, I decided to put this nagging doubt to bed, and temporarily set up my road bike on the turbo trainer (in place of the old flat bar bike that is usually set up there), to have a head-to-head test of the 4iiii and Satori Smart power meters. The 4iiii power meter has a claimed accuracy of +/- 1%, compared to +/- 10% for the Satori, so I was going to believe the former and was looking to see how close the latter came in the test.

To start with, I did a calibration of both. The 4iiii calibration involves simply turning the crank to 6 o’clock and pressing the calibrate button on my Wahoo Elemnt Bolt. The Satori needs to have a spin-down calibration done from within the Tacx iPhone app. The tension of the roller is increased or decreased and the calibration repeated if it isn’t right first time.

Once that was done, I started Zwift and did a little ride at various power levels. I let Zwift use the Satori Smart output, and captured the 4iiii watts on my Wahoo. At the end, I imported both sets of data into Golden Cheetah then saved them as .csv files, so I could compare them in Excel. 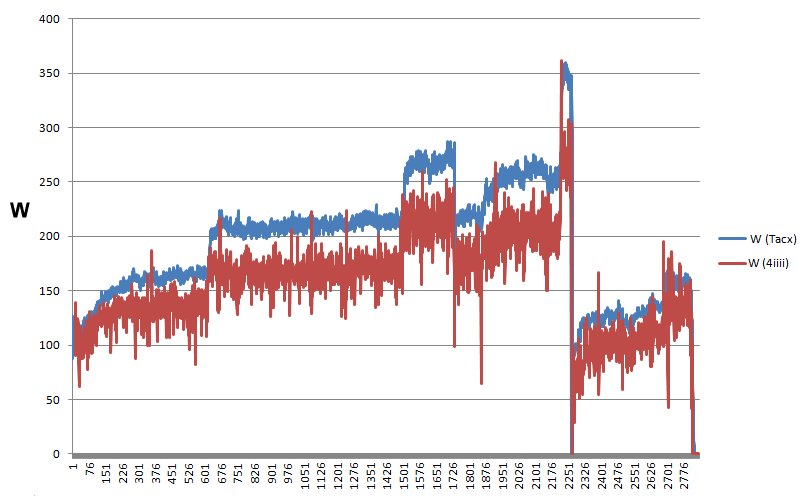 Comparison of the power outputs from the 4iiii power meter (red) and Tacx Satori Smart (blue). Note how the real-life power spikes are visible in the 4iiii output, while the Tacx transmits a more smoothed power output.

The results were very revealing! It was disappointing, but not completely unexpected, to find that the Satori Smart overestimated my watts by around 20-25%. The higher my watts, the more out it was.

After a bit of reading around, I discovered that Zwift recommend doing a 10 minute warm-up before calibrating your turbo trainer. I tried to do this, but wasn’t able to get the roller tight enough to the tyre. The adjustment is carried out by unscrewing a bolt from a cylindrical captive nut, but the bolt isn’t long enough, and comes apart from the nut before the roller gets tight enough. This is infuriating, as I need to guddle around for ages to get it back on again.

The only way round it was to buy a fatter 25mm trainer tyre in place of the 23mm one I’d been using for the past years. That worked! I was now able to do a warm calibration. The resulting comparison showed that the two outputs were in close agreement at 100-150 watts, but the Satori began to drift ahead of the 4iiii readings as the watts (and presumably tyre temperature) increased. The discrepancy wasn’t as bad as before but isn’t ideal. However, there isn’t a lot I can do about it, short of using the 4iiii permanently on the turbo trainer or buying a better turbo, neither of which is an option at the moment. 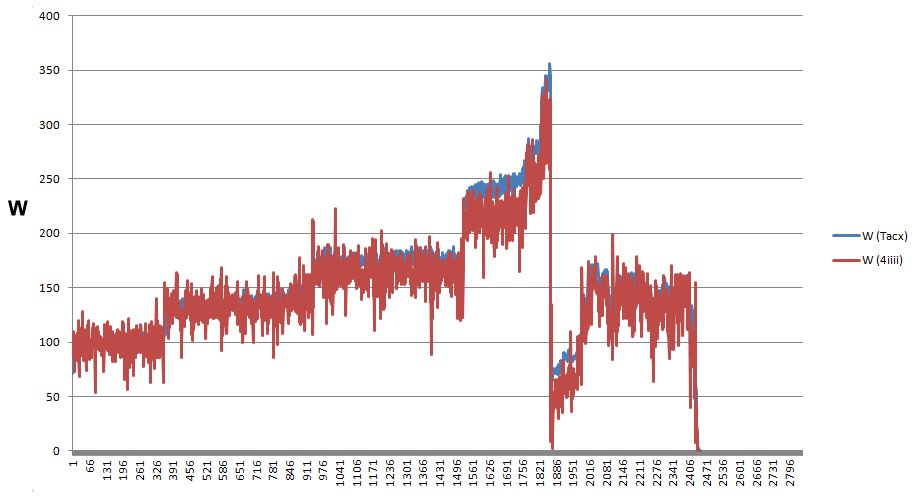 The end result of all this, is I am now doing a warm calibration, accepting the Satori output for what it’s worth and getting on with enjoying my Zwifting. Having completed another FTP test today, I got 267 W. That’s about 7% more than I got on the road with my 4iiii earlier in the year. For me that’s close enough. Perhaps I would feel differently if the discrepancy were in the opposite direction!

Sod’s Law… the day after proclaiming myself happy with the current Zwift setup, I jump on for a wee ride in Watopia and get about 3 miles in, when pssssst… I get a puncture! That was the last thing I wanted, as that 25mm tyre from Decathlon is really awkward to get on and off. I punctured two inner tubes trying to get it on in the first place. Taking the tyre off resulted in two broken tyre levers, so by this time I was ready to chuck the new tyre and put the old Vittoria one back on, as it had never caused me any hassles.

But that left me with the old problem of not getting the roller tight enough to the tyre. To solve this, I tried reattaching the roller unit in the position for 26″ tyres, then backing the roller away as much as possible by screwing the adjustment knob in. The roller was still marginally too close to the tyre after screwing it in as far as it would go, but there was another element of adjustment available by unscrewing the locking nut part way down the bolt (see diagram).

That way, I got the turbo trainer adjusted to allow for a warm calibration with the 23mm tyre. All worked fine on a test ride. Hopefully it will behave itself now…