Another weather window appeared, and with the west looking best, we decided to try out a route idea that had been lying dormant for some time – a loop of Loch Lomond.

The route involves a boat crossing, so it was important to get the timing right. We needed to be in Tarbet for about 11am, so we made sure to arrive in Drymen for an 8am start. It was lovely and sunny when we set off, but still a little chilly, so I wore my waterproof to start with, to keep the cold out.

We headed south out of Drymen, taking main roads as far as Croftamie, where we turned right onto a cycle path (National Cycle route 7). In fact, we could have taken route 7 from the start in Drymen but it would have been less direct. In retrospect, the surface of the A811 was so awful that I would definitely stick to the cycle route next time.

The cycle path took us out onto a network of quiet country roads, where route 7 zig-zagged southwestward. It then took us through a country park before arriving in Balloch. The road was closed some distance ahead, so the traffic was virtually non-existent here, apart from bikes. We crossed River Leven, where the moorings were jam-packed with pleasure craft, then took a minor road that went past the Cameron House Hotel, currently still undergoing renovations following the devastating fire of a few years ago.

After a short while, we arrived at Duck Bay for our first clear view of Loch Lomond, looking lovely and still on a calm, sunny morning. Cycling further north, the West Loch Lomond Cycle Path took us away from the loch and alongside the busy A82. The pavement was lumpy and uncomfortable, and the proximity of noisy traffic, combined with the lack of view, made it a somewhat unfulfilling experience. I just kept saying to myself that it was a means to an end, and the good part was still to come. 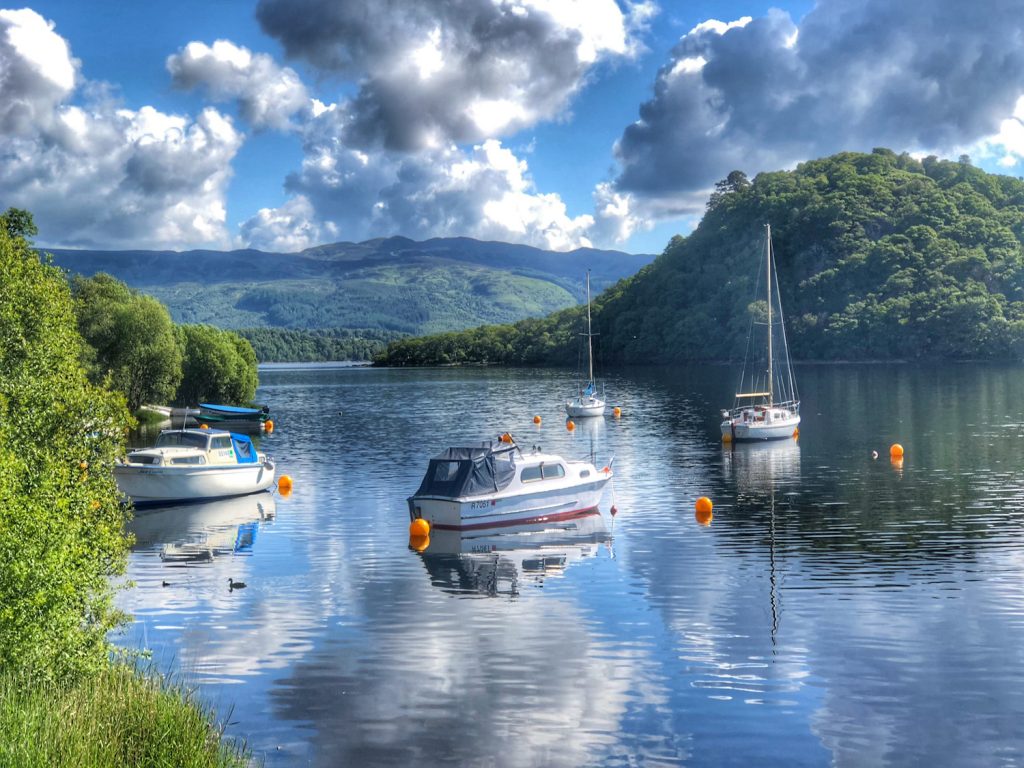 It took a good few miles, but we finally parted company with the main road to follow a minor road to Aldlochy, where we met the shore of Loch Lomond again. Cue more photos of the picturesque scenery. Further north, we arrived at Luss, where we hoped to stop for a comfort break, but the queue for the loo was enormous, so we just carried on.

For the rest of our ride as far as Tarbet, the route took a mixture of old (disused) road and custom-made cycle path. The latter was much better than the pavement of the first half of the ride, despite being close to the road at times, as it was much better quality and besides, we had a great view of the loch. It was just the last half mile or so before Tarbet where we found the pavement got lumpy again, but our first destination was in sight, and we had plenty of time to spare.

We stopped at the Bonnie and Ben cafe, where we had a bacon roll and coffee, and bought our tickets for the boat to Inversnaid. Our safety margin allowed us time for a rest in the sun next to the pier, while we waited for our boat, Lomond Queen, to appear. Despite there being a large gathering of schoolkids at the pier on a summer outing, it turned out that they weren’t taking our boat, so it was far from crowded. Our bikes were left resting against railings at the stern and we sat on the open top deck. 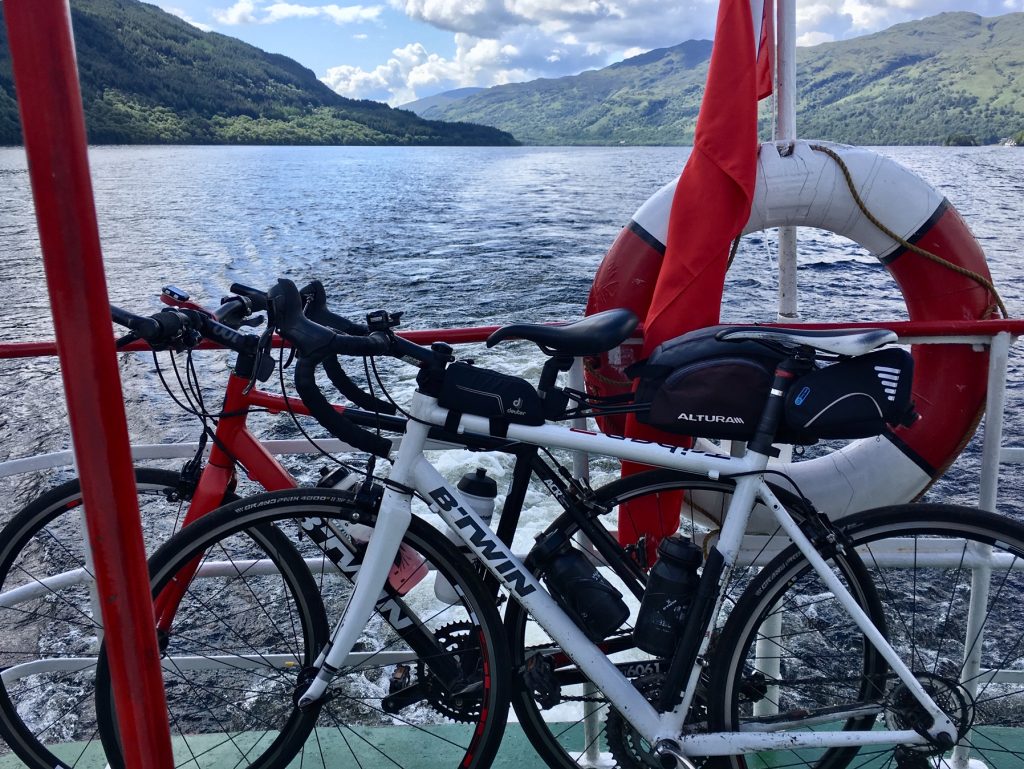 The fare was a bit pricier than I’d anticipated, but this was a pleasure cruiser, not a subsidised ferry, and it was well worth it for the experience. We were treated to some informative banter and a really restful transfer to Inversnaid on the other side of the loch, where we saw loads of walkers on the West Highland Way that runs along the east side of the loch here.

At about noon, we disembarked next to Inversnaid Hotel and were faced with a steep hill as soon as we got back on our bikes. I had prepared mentally for this, but in fact it seemed a lot less fearsome than I expected. Perhaps this has something to do with the fact that we just rode up Kenmore Hill a few days ago!

After a mile or so, the road levelled off and we reached Loch Arklet, which stayed on our right until we reached a turning that took us onto the now familiar road that leads down to Aberfoyle.

Although it had been sunny up to this point, we witnessed it cloud over, with some heavy rain clearly ahead of us somewhere in the Trossachs. Well, a trip to the Trossachs isn’t complete without a shower!

As we continued our descent, the road became wet, and we spent a few minutes in the rain. By the time we reached Aberfoyle, it was sunny and warm again, but I was a bit soggy, mostly due to spray from the road and fat drops from the trees overhead.

We had another cafe stop in Liz MacGregor’s coffee shop, then emerged into what had become a hot summer afternoon. Before we got started again, we had a chat to a cyclist who had ridden over from Dumbarton. He warned us of the steep hill lying in wait for us before we returned to Drymen. Ah great, just what we wanted to know!

It was route 7 all the way there, first taking us through Gartmore, then out onto open moorland. The steep climb arrived, and it was a good challenge, especially this close to the end. It certainly felt harder overall than the climb up from Inversnaid, taking us to our high point of the day, even if it was only just over 600 ft.

From there it was downhill all the way into Drymen, where we packed the bikes away into the baking car and headed back to the cooler east. We really enjoyed our day out and would certainly recommend it, despite the south part of the West Loch Lomond path being a bit tedious. It definitely is worth it for the rest of the ride.