The last couple of weeks have been such a washout that when the forecast showed a dry day, we jumped at the chance to organise a trip away. According to the forecast, there was another low pressure area on the way from the south, so heading north made sense, to maximise our dry time before the rain arrived.

I planned a route from Dunkeld, heading to Kenmore then over a hill and back via Amulree. It all looked good with not a massive amount of climbing, but on further inspection, it transpired that most of the ascent would be crammed into a single whopper of a hill. Ah yes, Kenmore Hill, I remember reading about that in Simon Warren’s Cycling Climbs of Scotland book that I got for Christmas. Colette and I were going to be joined by Fiona and Alison, so I made sure that they were warned about the climb before hand. They were happy to give it a try, so the ride was on…!

Not being sure about the parking in the Dunkeld area, I suggested we meet at the Hermitage car park, off the A9 just past Dunkeld. Typically, Colette and I set off way too early, so we arrived with nearly an hour to spare. We went to fill up the car with petrol, find a loo (not easy before 9am!) and get some bits and pieces from the Co-op before parking up (£3 charge for the day). After having a drink of coffee from the flask that Colette had prepared, there was still 30 minutes to go before our allotted start time, so we got on our bikes and had a wee explore along the Hermitage trails. 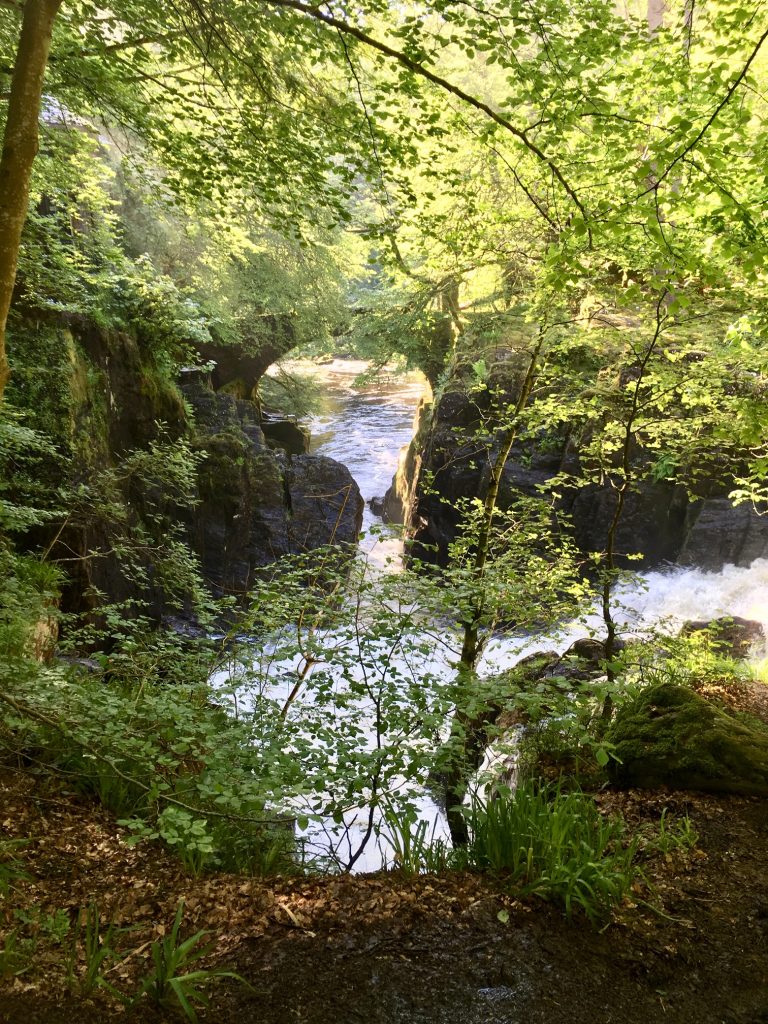 We cycled as far as a funny circular building, which is known as Ossian’s Hall, overlooking an impressive waterfall and chasm through which runs River Braan. While we were admiring this, Fiona called to say that she had arrived at the car park, so we looped back to meet her. Alison then arrived (perfectly on time as usual) and we got ready for the off.

In order to avoid riding on the A9, we rode a short section of pavement before the path took us into the village of Inver, where we took another path that eventually led us under the main road and into Little Dunkeld. A grand bridge took us over the River Tay and through Dunkeld itself. At the far end of town, cycle route 77 runs off past Dunkeld House Hotel, but we avoided that, since the path would likely be very muddy after the recent rain. Instead, we stuck to route 83, which takes the minor road leading west then north from Dunkeld.

This took us uphill to start with, past Polney Loch, then it was easy going with a few miles of gradual downhill. After that, we came to the A9 and spent some miles either riding on a path parallel to the main road, or taking short offshoots on minor roads past wee villages like Dowally and Kindallachan. When we arrived at Ballinluig, we briefly joined the A827, taking us over the A9 and as far as Logierait, where we cycled over the private bridge and joined cycle route 7.

More easy riding continued, as we followed route 7 as far as Strathtay. At this point, we were ready for a cuppa, so we followed the advice of our cycling friend Lynne, who recommended visiting the chocolate shop in Grandtully. That was just a short way away, down the hill and over the bridge. 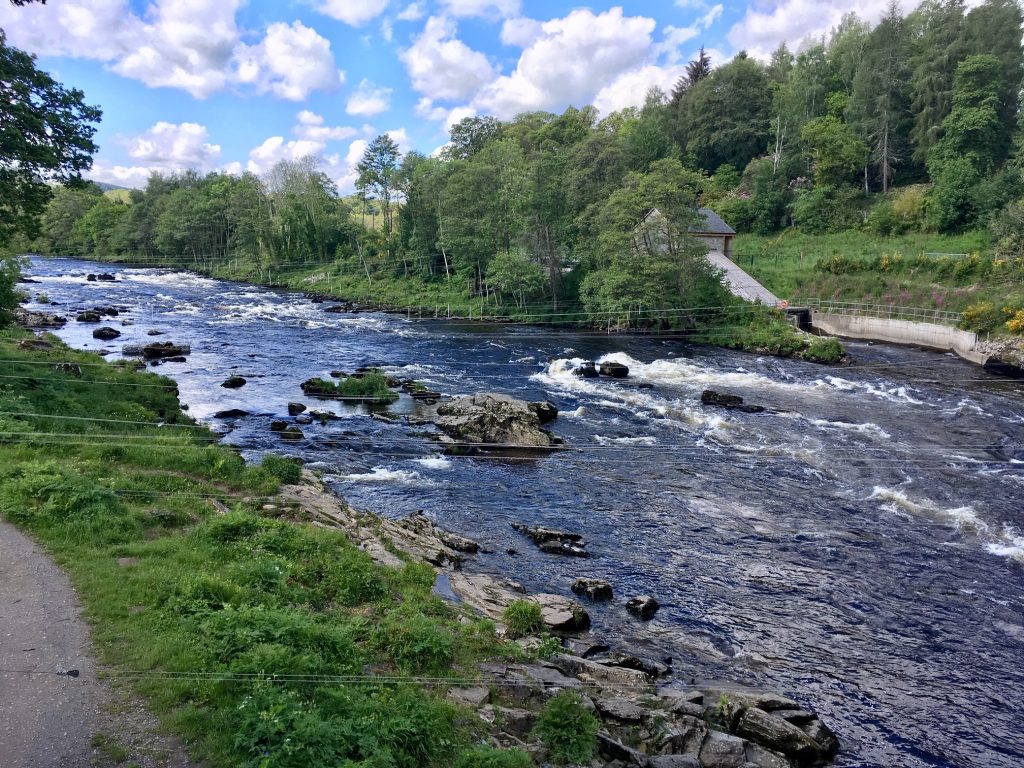 We stopped for a moment on the bridge over the Tay to admire the rapids. It brought back memories of the last time I set foot in Grandtully, the best part of 30 years ago, when taking part in a raft race with my work colleagues. Our raft got stuck on a rock in the middle of the rapids and we had to get rescued by men in wetsuits with ropes.

No such dramas today though, as we went for a coffee and scone in the chocolate shop. It was a lovely place and well worth a visit. We sat at a table outside, enjoying the novelty of some warm sunshine. 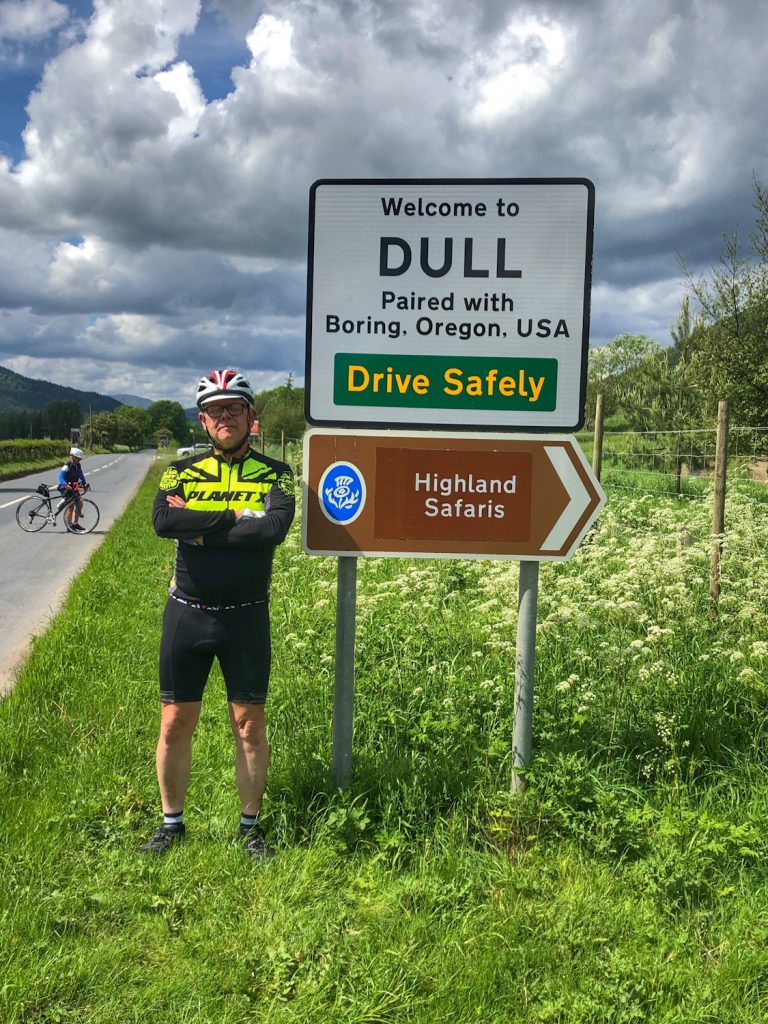 Moving on, we crossed back over the bridge to Strathtay, and continued westwards along route 7. We caught sight of Aberfeldy as we passed at a distance on the other side of the river, then we came to the village of Dull. It was compulsory to stop for a photo. It was also appropriate that it was now clouding over, reminding us of the weather system heading our way.

After lunch, we continued to the lovely little town of Kenmore, where we paused for a short while to admire the view at the bottom end of Loch Tay. The climb of the day was waiting, so we got back on the bikes and rode onward to the junction where the Kenmore Hill climb started. It was a narrow road, running steeply upwards into woodland, so we couldn’t see all that far ahead. The only thing to do was get down into the lowest gear and do your best.

We all went at our own pace. My pace was going to be dictated by my heart rate monitor, where I was aiming to stay below 180 bpm. I had created a heart rate page for my Wahoo bike computer to give me something to focus on, and didn’t dare look at the climbing page, as it would have been demoralising to see such slow progress up the hill.

The slopes were very steep to start with, and even more so at the corners, then there was a long super steep stretch where it was difficult to keep the front wheel from rearing up from the tarmac. That sent my heart rate into the red for a few minutes. 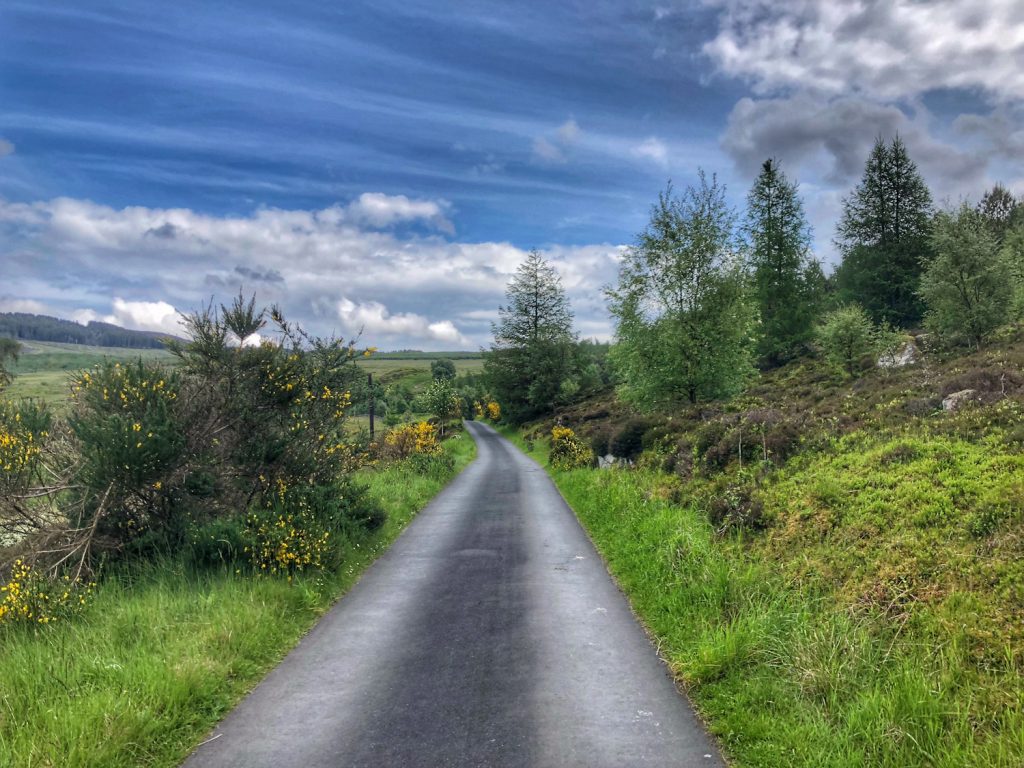 We were thankful for this easy section halfway through to get some respite.

With trees on both sides obscuring the view, it was hard to judge exactly how far you’d gone, but at least they protected you from any wind. After what seemed like an age, a cattle grid sign came into view and the slope eased off. I eased off too, to bring the HR down a bit (AKA having a breather).

That easement didn’t last long though, and after reaching a house, the road turned right and a long 15% ramp began. Alison caught up with me about then and we continued together until a car came up from behind. I tried to keep to the left as much as possible, and as I did so, began to wobble off the tarmac. I put a foot down to steady myself and push off again, but it went down into a ditch. That brought me to an ungainly halt, jarring my left hip. It took a couple of attempts to get going again on the steep slope, feeling a bit stupid, but it didn’t slow me down too much.

The trees had mostly petered out and we were now riding through open countryside into a brisk headwind. Ahead, the road continued at a significant, if somewhat reduced gradient. Alison was pedalling along steadily, as if she could carry on all day. A daft grouse tried its best to stop her though, by throwing itself at her front wheel, whilst putting on a wounded decoy act. Luckily they both ended up unscathed, though it did cause some alarm and a momentary slowdown.

When we passed a small loch, I knew that we were nearing the end. From there, the road undulated across the moor, until we rounded a final corner and started going downhill, when we stopped and waited for the others to arrive. 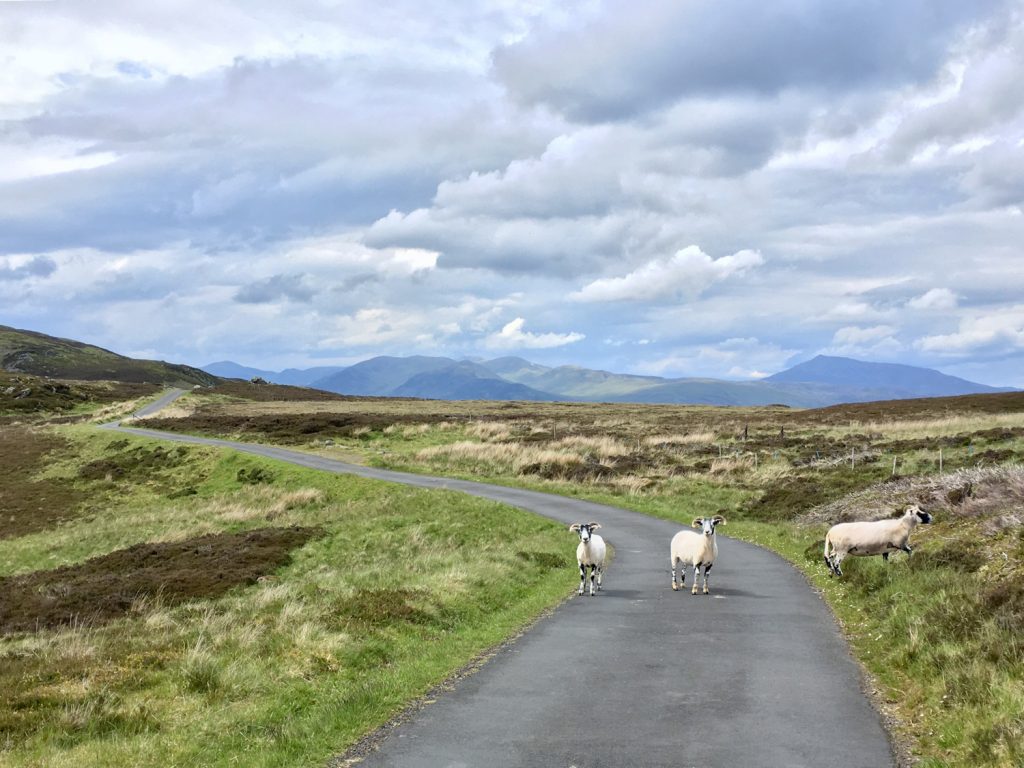 After Fiona appeared, I backtracked a bit to take some photos and met Colette coming the other way. It took a while to get back with a convoy of 6 cars coming towards us, but once we reached Alison and Fiona, we certainly sped up on the descent. There were two lovely hairpins then a long, fast section where I was glad that no more cars were coming my way. 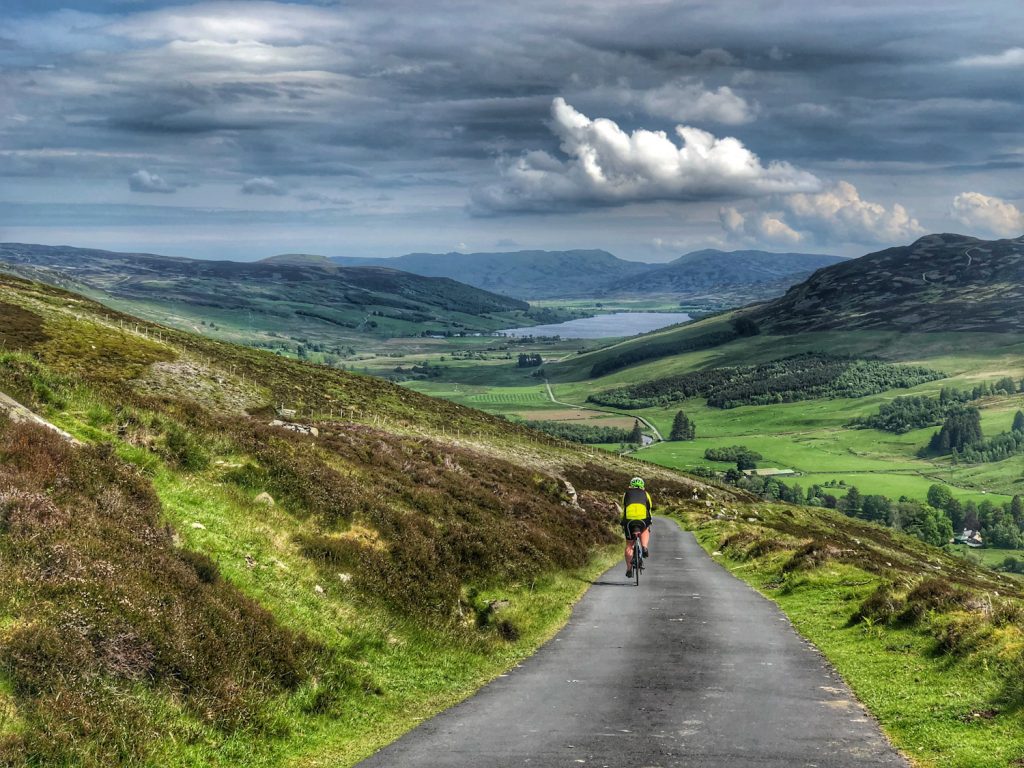 Alison taking on the beautiful descent to Glen Quaich

I waited at the bottom of the descent on a bridge, then we continued through Glen Quaich, past Loch Freuchie, where the choppy water was looking quite dark. We worked our way to Amulree, where we met the A822 and a bit more traffic, though it wasn’t exactly busy. 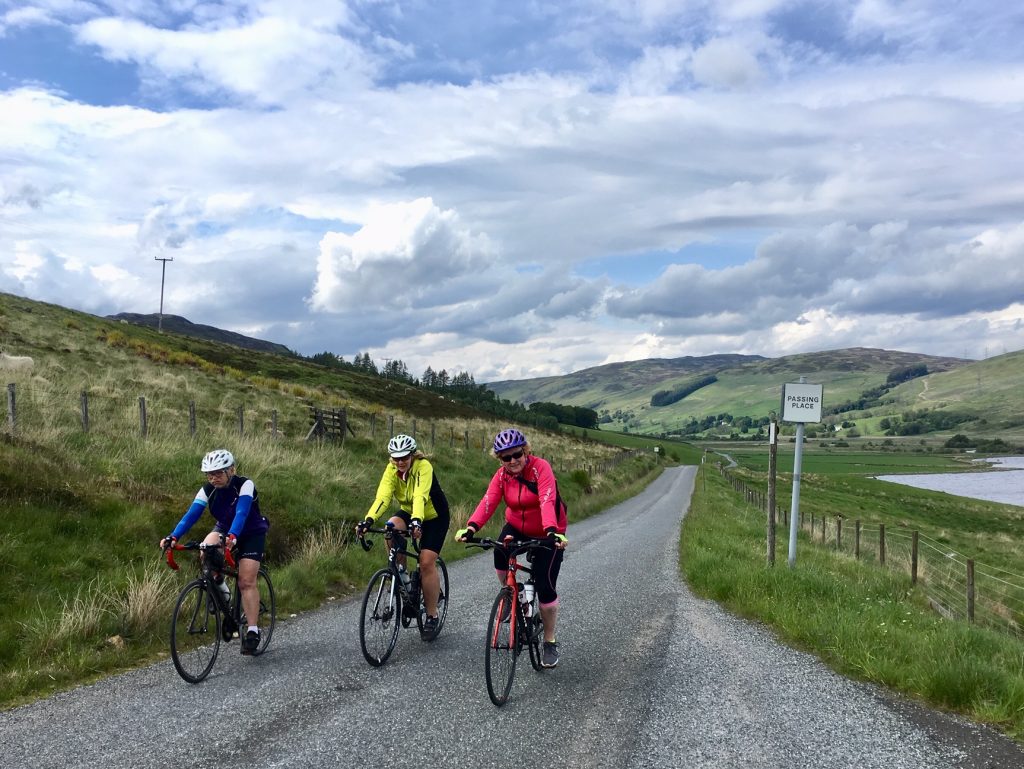 The road was mostly flat or slightly downhill, so we made good time as we returned to Dunkeld. A few miles short of the town, I sent us down a minor road to a bridge over River Braan, where we stopped to admire the waterfall.

A short distance uphill from that took us to the start of a path leading to the Hermitage. It was marked on the map as a cycle path and started out OK, but quickly became more like a narrow mountain bike track. I knew this wasn’t Alison’s type of thing, but she didn’t complain, and led the way. Fiona was at the back, and as I waited for her to come into view at a gate, heard the sound of her coming to grief. Colette and I went back to find her inserted into a bush, laughing and trying to get back up. 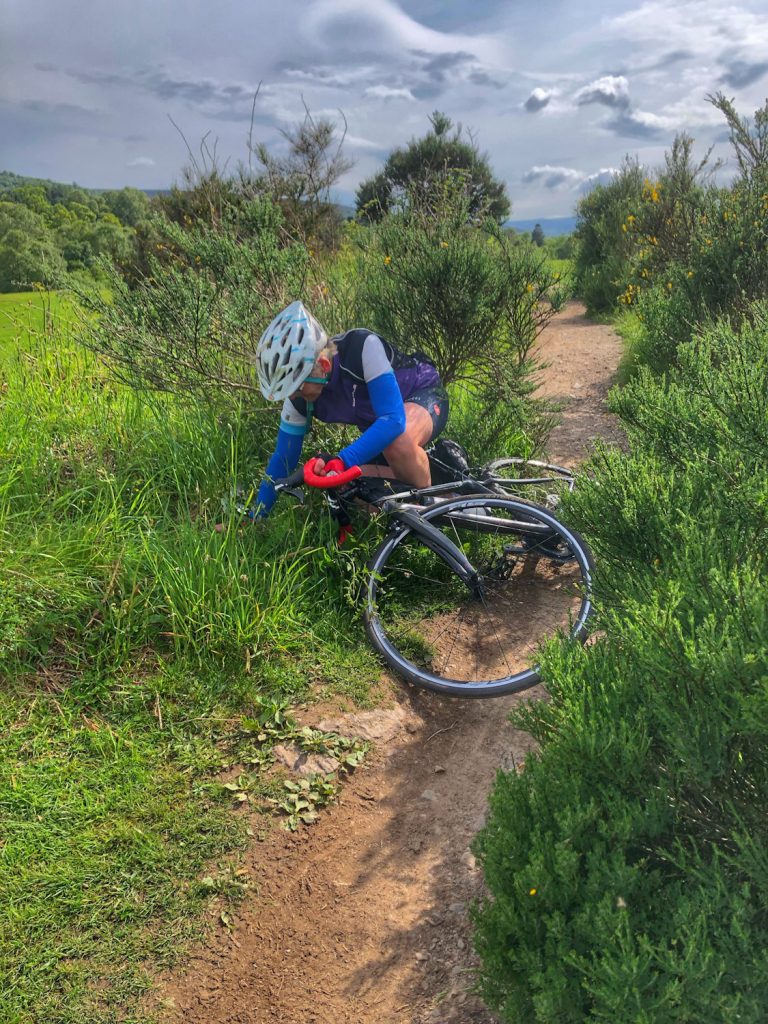 Fiona in a bush before we untangled her from her bike

Once we got Fiona back to her feet, we continued into the woods and followed a flowing track through the trees, which took us to the actual Hermitage – a very humble abode fashioned out of a small rock cave. From there, we continued on the lovely woodland path on our road bikes. Mine wasn’t the most suitable, as the pine needles kept clogging up the space between my tyres and the brakes.

However, the path took us onto a forestry track for the final descent back to the car park. A bit bumpy maybe but still OK for a 30+ mph flourish to the finish. All that remained was to pack away and say our goodbyes. I was so glad that everyone had a great day out, and despite the climb being so difficult, it was an experience that we all enjoyed.

I was also chuffed to have made the best use of our small weather window, and true to the forecast, we met the heavy rain on its way north as we drove back home. Kudos to the Met Office for that one!