We were contemplating heading out into the cold east wind on this particular day, when we noticed that out in the west, the forecast was for 16 degrees C and sunshine all day. It wasn’t long before we said “what the heck” and got the car packed up. Off we went, in the general direction of Oban, making up a plan on the way. 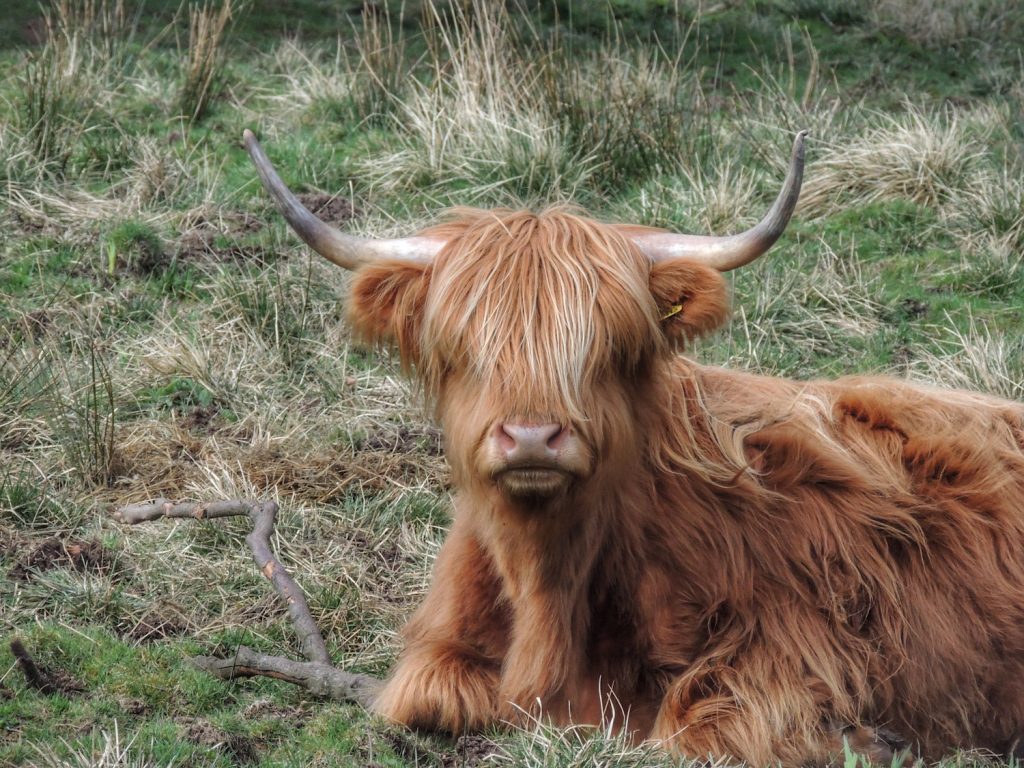 After a nice drive, we arrived at the village of Taynuilt, about 10 miles short of Oban. We headed out SW from the village along National Cycle Route 78. The route took us uphill for a while before opening out onto rolling countryside with a backdrop of mountains. This was rugged hill farming country, with occasional Highland cattle to prove the point. 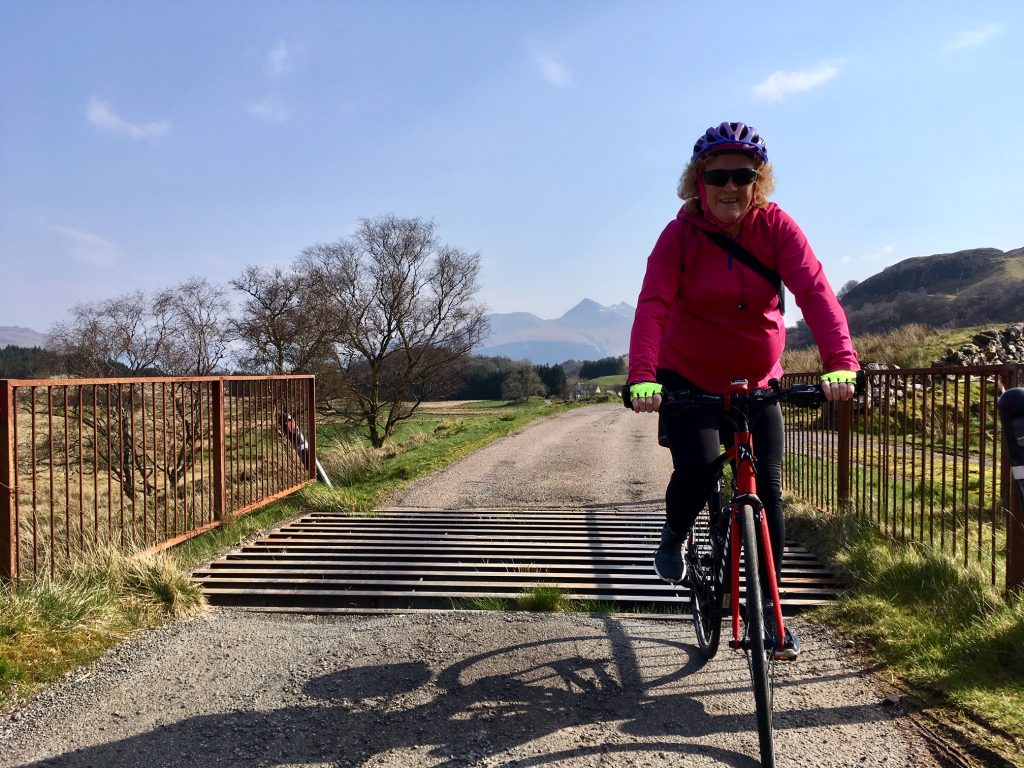 The road was not best quality though, with potholes and deposits of gravel keeping us constantly looking for the best line, a bit like mountain biking. After about 5 miles, the road improved a bit, allowing us to take in more of the beautiful countryside as we rode along. A few more short sharp climbs and one last fast downhill brought us out at the centre of Oban.

This was a bit of a culture shock, where we sat at a junction for several minutes before we could get out into the traffic on the main road through town. We had only gone about 10 miles, but due to starting out a bit late, it was already lunch time. 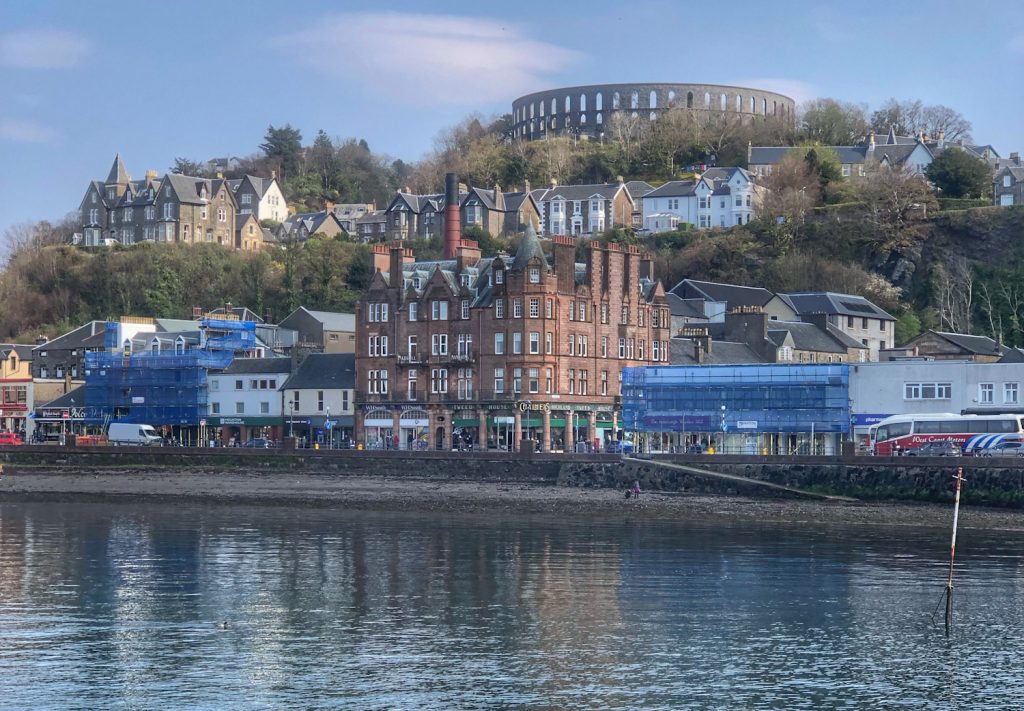 We investigated the harbour area. There were some tempting seafood shacks, but nowhere to sit down. We chose to patronise the cavernous Weatherspoons instead, where we had a tasty lunch at a very reasonable price.

At the dockside, we watched ferries coming and going and soaked up a few warming rays before getting back on the bikes. Route 78 took us north out of town, along the shoreline. There were some impressive houses there, with great views out to sea across Oban’s natural protected harbour.

Leaving the town behind, we were loving the scenery. This was the first time that either Colette or I had come this way. There was an impressive sea stack, followed by Dunollie Castle, with the sound of bagpipes drifting from the ramparts and out to sea.

A mile or two beyond, the road ended at a seaside car park. However, the cycle path continued across country, with signs warning of steep gradients ahead. Steep yes, but very short, so no real obstacle to progress.

We followed this wee path till it came out at Dunbeg, then it dumped us back out on the main A85, which we cycled along for a couple of miles. There is a small car park with a view of Connel bridge, so we stopped there for a view of the Falls of Lora. This is the narrow opening where Loch Etive opens out to the sea proper. It was about halfway through the ebb tide, so the water was running strongly, creating impressive eddies and whirlpools.

Our next objective was to cross this maelstrom via the Connel Bridge. The problem here is that the crossing is a single carriageway, controlled by traffic lights. Unfortunately, cycles inevitably cause a tailback in the traffic, so the bus behind us had to wait till we were fully over before it could get past.

We followed the bus as it turned off into North Connel, then continued northwards on the route 78 cycle path. This took us past Oban’s tiny airport, where we waved to our bus driver again, who had arrived at his next stop via the main road.

My map seems to be out of date, as I was expecting to have to do the next part on the main road, but the route 78 cycle path had been recently extended northwards from here. We gladly followed it north, passing through a large campsite and onward to Benderloch. Here, we went looking for a shop to replenish water and snack rations before continuing on route 78.

At times we were routed alongside the A828, but thankfully not along it. The route then crossed the main road to the east side towards the village of Barcaldine. Here, we parted company with route 78 and turned right, in the direction of Bonawe.

Straight away, we started a climb that went on for several miles through forest. We weren’t in any hurry though, so we had the odd stop on the way. At the top of the climb, we left the trees behind and the view opened up, revealing Loch Etive in all its glory below us. 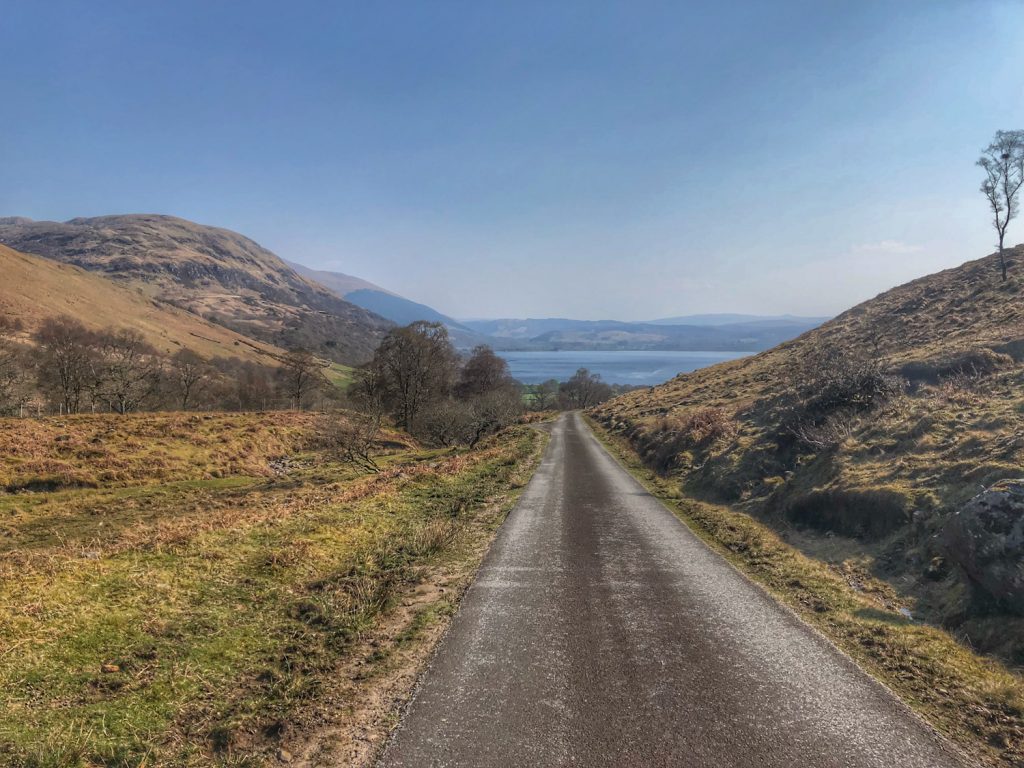 There was then a fast downhill section, where I was glad not to meet any cars coming up the opposite direction! At the bottom, we came to a kind of T-junction, where the road continued either left to Bonawe or right to North Connel, and a crow would have the option of flying straight forward about a couple of miles to Taynuilt.

Originally, I had thought of cycling as far as the dead end at Bonawe, then turning back. However, that would have added at least 4 miles so we shelved it for another time, and turned right to cycle along the shore of Loch Etive.

This was by and large a flat ride along a quiet and scenic lochside road. There were a couple of undulations though, including the one bringing us back to the Connel bridge. Again, I had to wave apologetically to the oncoming traffic, who were waiting impatiently with their light at green. I wondered if we should have cycled along the footpath, but there was no indication that I saw of it being a shared use path.

After that, we had the least pleasant part of the day, which was the 7 miles or so that we had to cycle east along the A85 to close the loop in Taynuilt. The scenery was still nice and the traffic polite, but there was quite a bit of it and we were conscious of causing a bit of a tailback at times. Ah well, it had to be done, and the sun was still shining warmly as we rolled up to the car at the end of the ride.

It was a superb day out, and we can’t wait for the next opportunity to head west and explore more of route 78…