After mentioning in passing to our friend Lynne that I fancied a wee cycle up Glen Clova, the next thing I knew she had organised a stay in the Airlie Arms hotel in Kirriemuir with a Groupon deal: two double rooms and evening meal at a great rate. That date got put away on the calendar and we endured the long winter till spring finally started to make its presence felt as the day approached. Then on the appointed day, the east wind came back to haunt us, and we were looking at a cold, cloudy and windy day, with occasional rain. Not the sort of day we would normally choose to go out, but we were committed, so off we went, hoping that we’d brought enough layers.

We parked at the RSPB reserve at Loch of Kinnordy and got ourselves ready. The bikes were loaded up, not forgetting two flasks of hot tea/coffee, and we set off west at first, skirting our way clockwise round the loch, till we got onto the Glen Clova road. There was some intermittent drizzle, but not really enough to dampen our spirits.

A few undulations took us to Dykehead, where the sad-looking derelict Royal Jubilee Arms hotel was up for sale. We took the right fork there for Glen Clova, rather than the one on the left, for Glen Prosen. 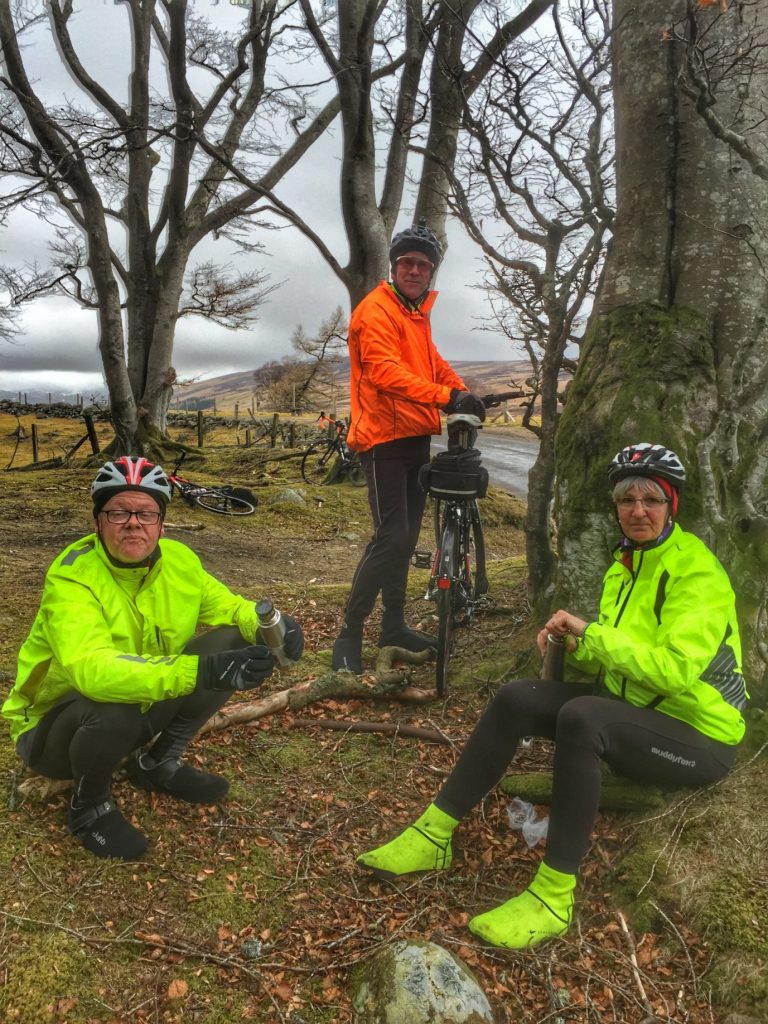 Oh what a cheerful picnic!

After about 10 miles of cycling, we were feeling cold and tired from battling the inclines and the headwind, so we stopped beside a wood for a warming drink from our flasks. Lynne had made some delicious truffles, which also helped recharge the batteries. 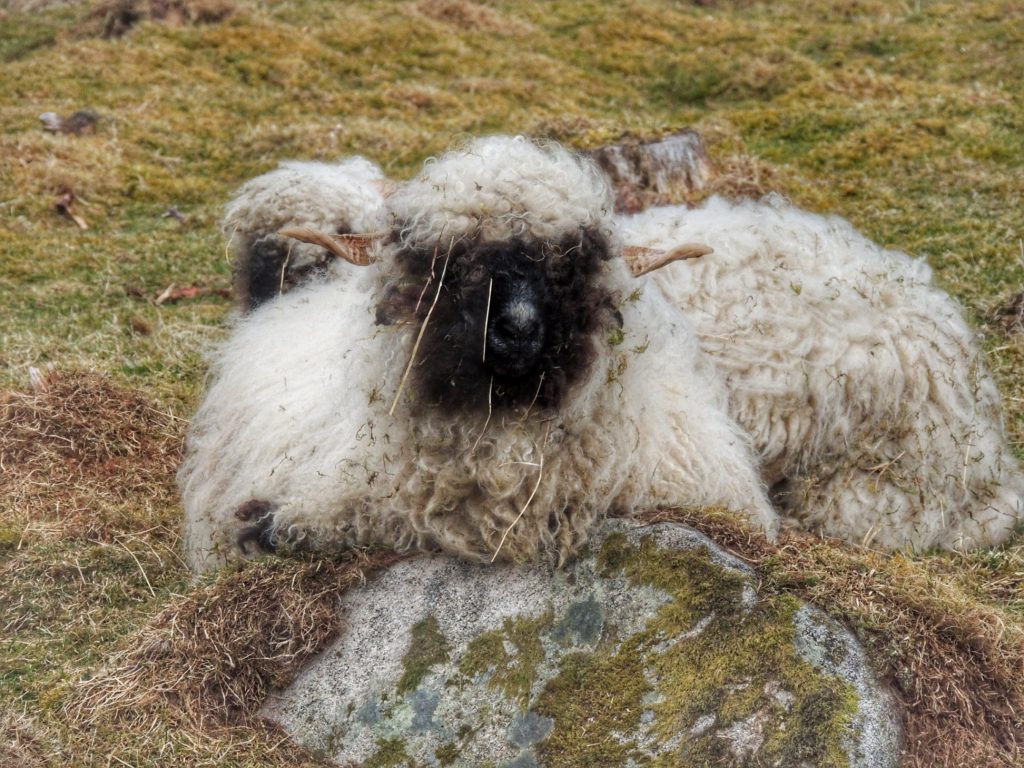 This unusual chap is a Swiss Valais blacknose sheep, so we’ve been told

Not long after we had got going again, while we were freewheeling downhill, Colette and I both spotted a sheep behaving strangely in a field, close to the road. We were both distracted by that, and what I didn’t realise was that she had started slowing down. I looked round too late to prevent a collision and went into the back of her. Luckily she stayed upright, but I went sprawling onto the road. I suppose I was lucky too, getting away lightly with just some grazing and bruising. The worst affected was my right hand, which had slapped off the road and was feeling quite sore. I needed a few minutes to compose myself before getting back on the bike, feeling a bit stupid. It could have been worse I suppose.

By this time, it was past 1pm, so we decided to press on to the Glen Clova Hotel for some lunch. Keith and I went ahead to get there and secure a table in case they stopped serving at 2pm, but in fact they kept serving all afternoon. Arriving at the bar, I had to order a medicinal snifter, which I took with two ibuprofen to dull the pain. 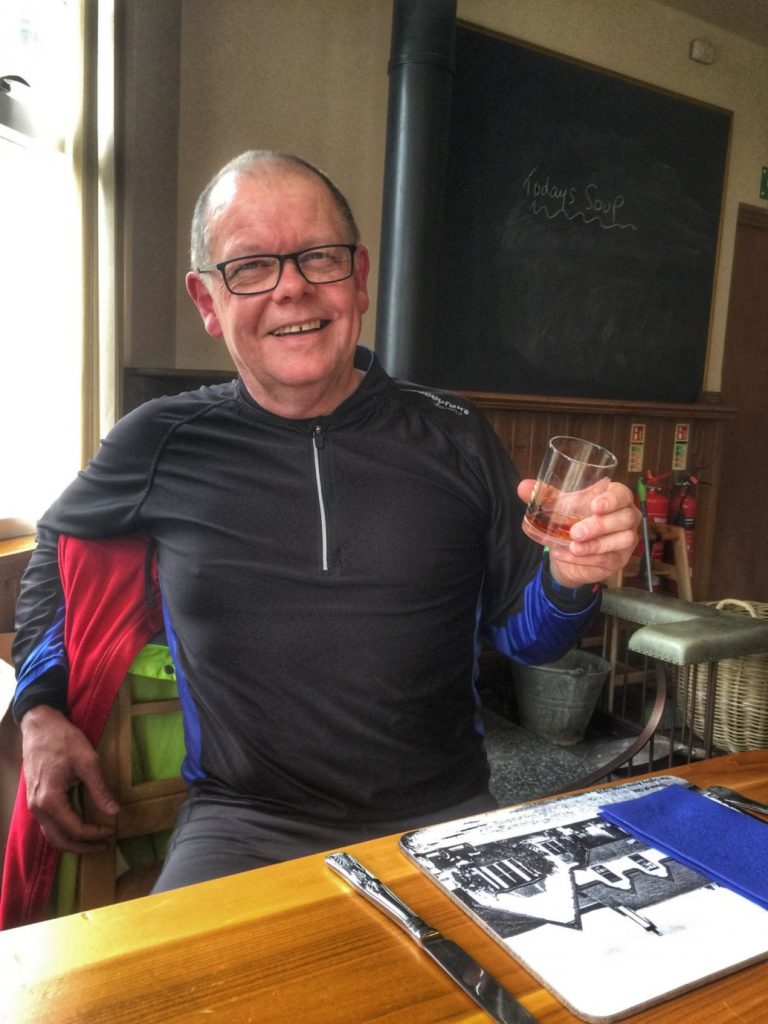 Time for my medicine

Colette and Lynne then arrived, and we ordered lunch. The other three took reduced portion size versions of fish and chips seeing as it was only lunchtime and we had a big meal to look forward to in the evening, while I felt I needed a full size steak pie to cheer me up! There was a log burner alongside, which we asked to be restoked, as the ladies were feeling the cold. We lingered alongside the fire to build up some heat before we ventured back outside. 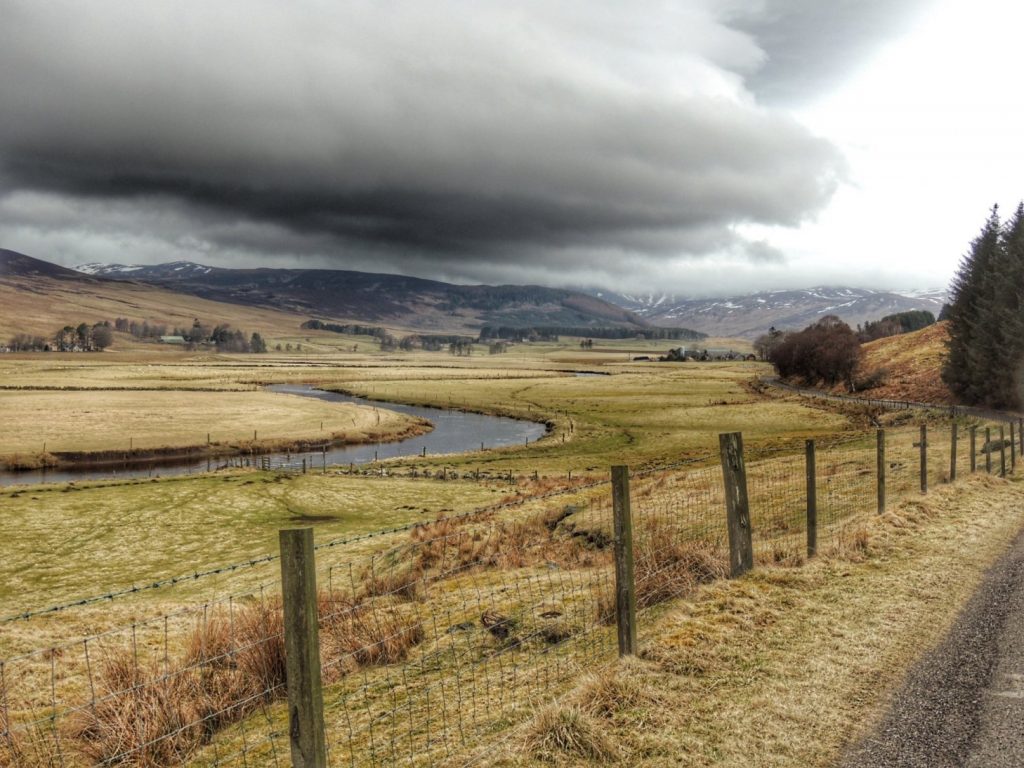 The top of Glen Clova was still a few more miles to the north and it was our plan originally to go as far as the road would take us. However, in view of my circumstances and the overcast weather spoiling the views, we decided to just head back. We took the road on the east side of the glen for our return journey, and quickly found it was much easier going with the wind behind our backs.

We must have been going almost twice as fast on our return, which took a slighlty shorter route that ended by skirting the edge of Kirriemuir before reaching the RSPB reserve from the other side.

With the ride over, we headed for our hotel, where I had a long soak in the bath to soothe my aches and pains. We then headed for the bar for some drinks and another lovely meal.

My night’s sleep wasn’t perfect, but it could have been a lot worse. I awoke still stiff, but definitely ready for another day’s cycling. I was also ready for breakfast, which was a generous full Scottish version with a big plate full of sausages, egg, bacon, haggis and black pudding. We all indulged in that, albeit in differing combinations, that also included tomato, mushrooms and beans. Fantastic, but I couldn’t manage it every day!

For day 2, I had planned a half-day’s cycle, ending in lunch followed by the drive home. The start point was a few miles out from Kirriemuir at Loch of Lintrathen. We parked our cars in a suitable opening at the side of the road, then quickly got going, passing Peel Farm a few minutes later, which would be our lunch stop later, after first riding a loop of Glen Isla.

It was just as dull as the first day and almost as cold, but with a little less wind and no rain, it felt marginally warmer. There were also quite a few hills to get up close to the start, which meant we weren’t exactly feeling the cold.

We turned right at Formal farm and rode north for a couple of miles before turning left onto the Glen Isla road. It was a little flatter here for a while, as we rode towards Kirkton of Glenisla. The hotel there was still closed, as we had found it last time, though our host at the hotel suggested that there might be some moves to open it up again.

On the positive side, there is a public toilet in the village, which came in handy. While Keith and I paused in Glenisla, Colette and Lynne forged ahead, so we didn’t catch them up again for another mile and a half, where they were waiting on a bridge. We turned left there, away from the main road, then right, taking us onto a minor road that climbed for about 2 miles. The climbing was eased by the friendly gradient and the wind at our backs. It was definitely one of the type 1 enjoyable climbing experiences (i.e. that is fun at the time, rather than type 2 fun, that you only enjoy in retrospect). 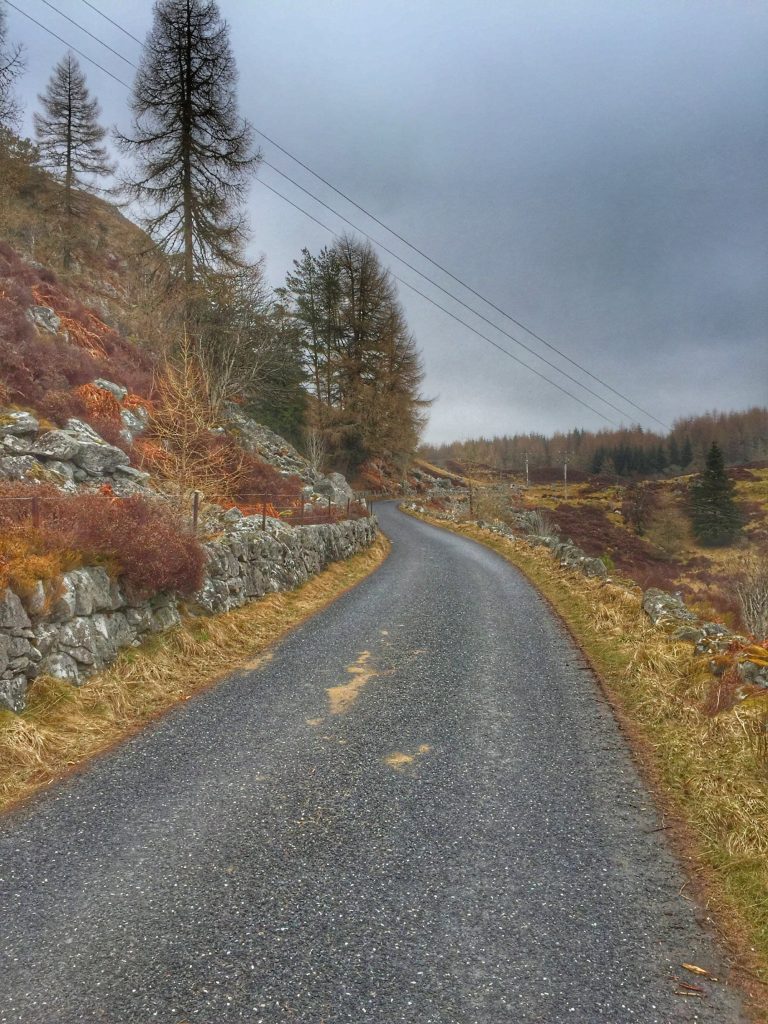 The views would have been magnificent on a good day, but were muted by the overcast sky. Even so, we stopped a few times for photos on the descent that followed, which took us out at Blacklunans. We propped up the bikes close to the gates of the country house and sat on the wall to have a coffee stop, having previously refilled our flasks at the hotel. And what’s more, Lynne still had four truffles left. Result! 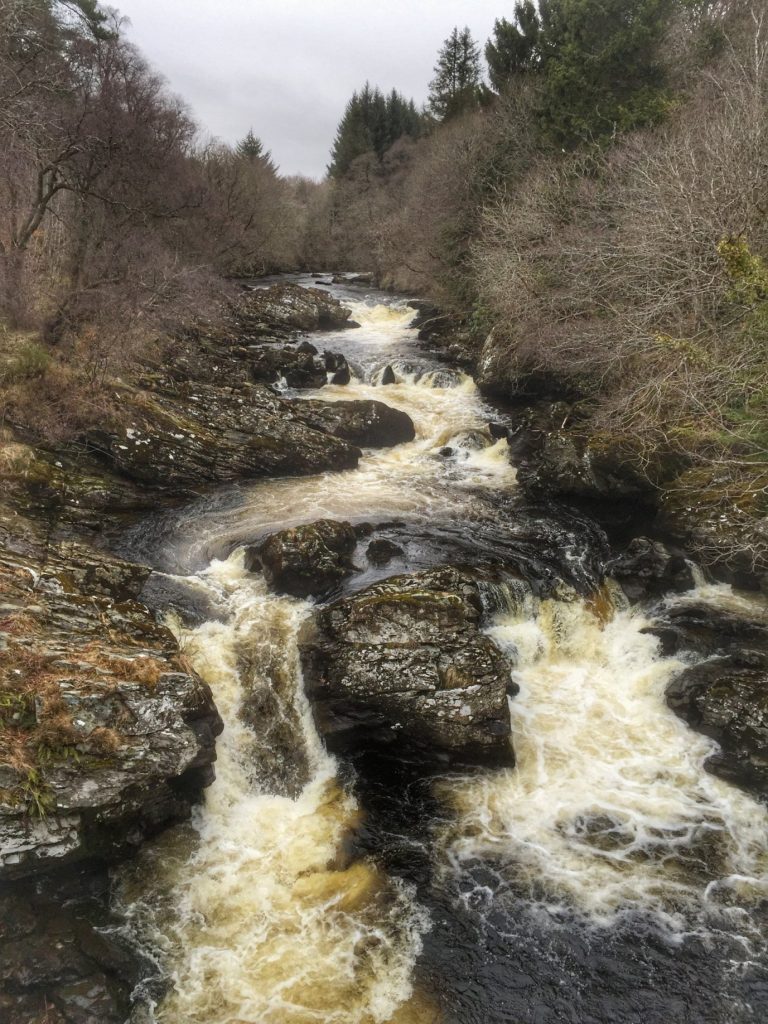 Moving on, we joined the A93 Glenshee road for a short while, before turning off left near a place called Bleaton. There was a great view from the bridge of a river cascading down the rocks. Stopping there gave us a wee breather before beginning a stiff climb that took us away from the valley, with a little easement in the gradient halfway, before the climbing continued all the way to about 1200 ft, bringing us out onto a windswept moor, covered in wind turbines. More like a type 2 climb, that one! 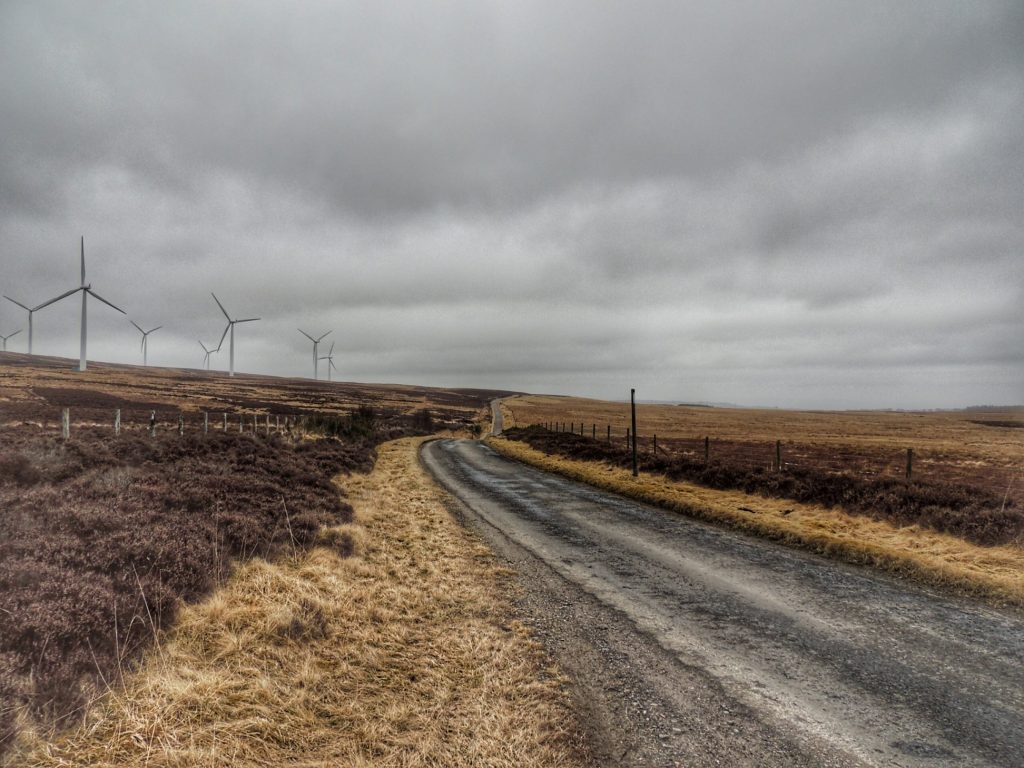 The installation of turbines was still ongoing, as we could see when we were stopped by traffic police and told to squeeze onto the verge. Shortly afterwards, two oversized lorries trundled past on the single track road, carrying massive pieces of a wind turbine construction kit.

At the end of our descent, we turned left through forest for a short while before coming back out into farmland. There was another short descent, followed by yet more climbing to take us back to Peel Farm, where we stopped for lunch. The soup was great, but there were some rumblings in the ranks about being given sliced white instead of homemade crusty bread with the soup. The place was really busy and they had run out. Ah well, we need to be faster next time!

A short half mile or so further on took us back to the cars and we were soon heading home, doing our best to follow the sometimes ambiguous instructions from the sat nav.

It had been a great couple of days cycling, despite the weather and my little mishap. The stay at the Airlie Arms was also a highlight, where the young staff were so friendly and helpful, and the food was spot on. That will surely be the last of the off-season Groupon deals for a while though, as summer will be along soon. Allegedly.